The Other Lubbock’s Fairy Wrasse… 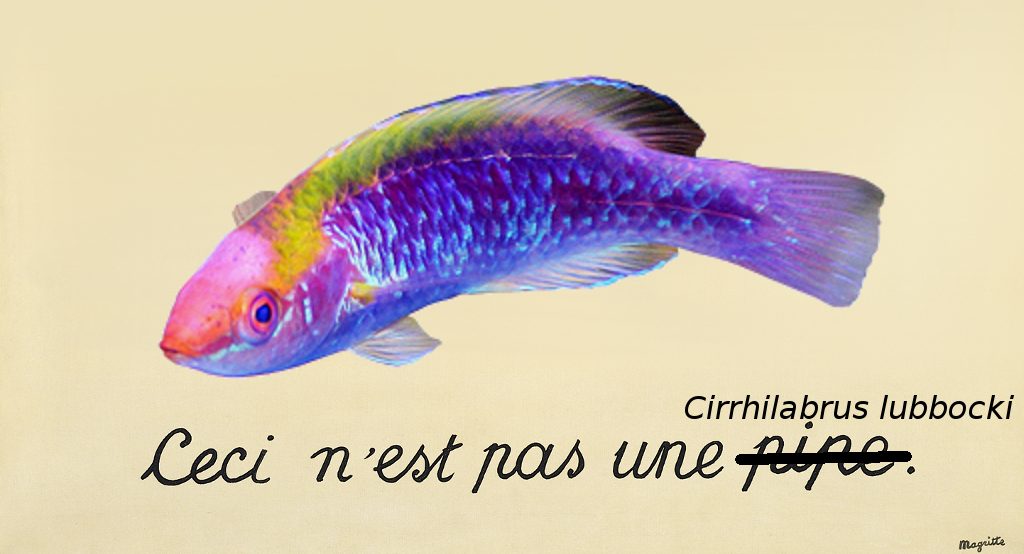 Cirrhilabrus lubbocki is a fish that many aquarists will be familiar with, as this species is one of the most abundantly exported and least expensive fairy wrasses in the aquarium trade. It’s small size, peaceful demeanor and beautiful colors have made it a perennial favorite, but, as it turns out, we have likely been misidentifying it. Most discussions make mention of its bewildering phenotypic diversity, but, unsurprisingly, these variations correlate perfectly to the biogeography of the Coral Triangle. Put simply, there is an undescribed species hiding in plain sight. 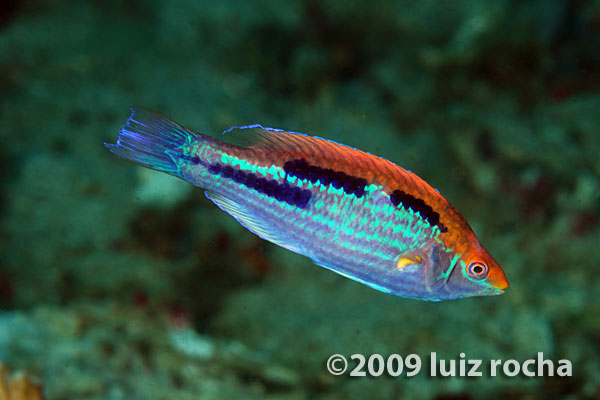 There are a couple common names floating around for these wrasses, which are currently being used somewhat interchangeably. Lubbock’s Fairy Wrasse most accurately refers to specimens known to occur in the Philippines and up into Taiwan and the Ryukyu Islands, where this species becomes appreciably less common. This is the true C. lubbocki, which was described in 1980 from Cebu. It’s key identifying trait is a series of parallel stripes, formed of reflective blue scales, which are present beneath the lateral line in males. The lateral line, which is broken into separate dorsal and caudal segments, is usually overlaid with a highly contrasting purple pigmentation, but, as we’ll see, this is not a diagnostic feature for this particular fish. 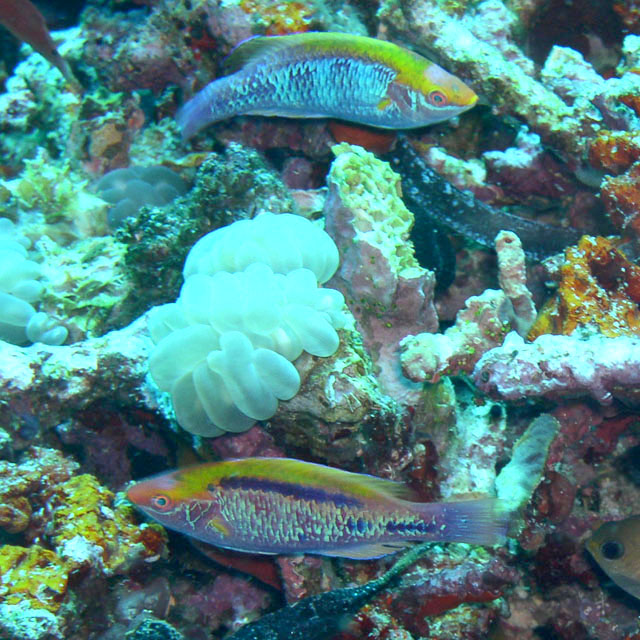 Much of the confusion surrounding C. lubbocki relates to these purple markings, which occur in fishes from both the Northern Coral Triangle (e.g. Philippines) and the Southern Coral Triangle (e.g. Indonesia). Given this similarity in patterning, coupled with their seemingly identical morphology, it’s not surprising that the fishes from these two regions have been lumped together. Popular field guides, scientific references and aquarium resources have without exception listed this as a single species, often making passing mention of the “variability” of terminal phase males. My own earlier treatment of this group (coauthored with LemonTYK) also missed the mark, but even a cursory study quickly reveals that there are considerable and consistent differences that allow us to easily separate the two. 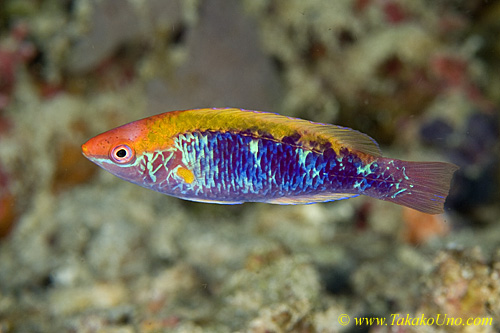 The Indonesian population, which I’ll call C. cf lubbocki, is generally referred to as the Tricolor Fairy Wrasse or Multicolor Fairy Wrasse by aquarists. This is an apt description of this fish, which is typically far more colorful than its northerly sister species. Unlike that fish’s prominent horizontal stripes, the Indonesian population has scales that are margined in the same reflective blue color, creating a chainlink or latticed pattern. In addition, the region above the lateral line and the dorsal fin are a brighter shade of yellow relative to the true C. lubbocki, while the body tends to take on a beautiful maroon or indigo hue.

The presence of the purple lateral line patterning is highly variable in the Indonesia C. cf lubbocki, with some individuals having it quite prominent, many others having only a faint trace, and others still which seem to lack it entirely. It’s not clear what might cause this, whether it relates to ontogenetic changes in the largest males or just random intraspecific variability, but it seems clear that there is no biogeographic basis—purple striped specimens have been observed everywhere this fish occurs. 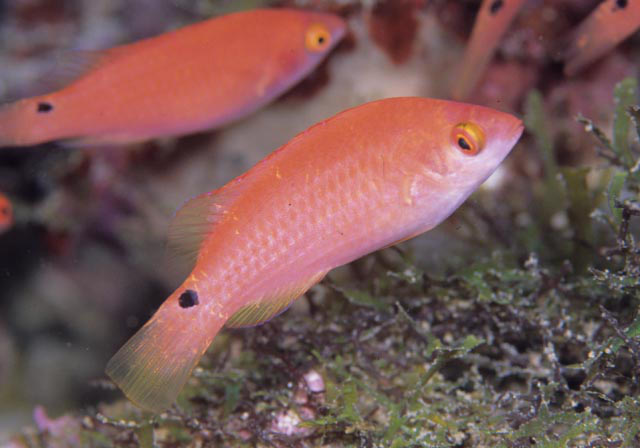 I’ve seen several discussions of these fishes, usually in aquarium forums, which suggest that their phenotypes relate to sexual differences, misidentifying the Philippines C. lubbocki as a female and the Indonesian C. cf lubbocki as the terminal male. In fact, females of both forms are essentially identical, being a salmony pink throughout the body, with a dark spot on the caudal peduncle, and they are hardly ever seen in aquarium exports. 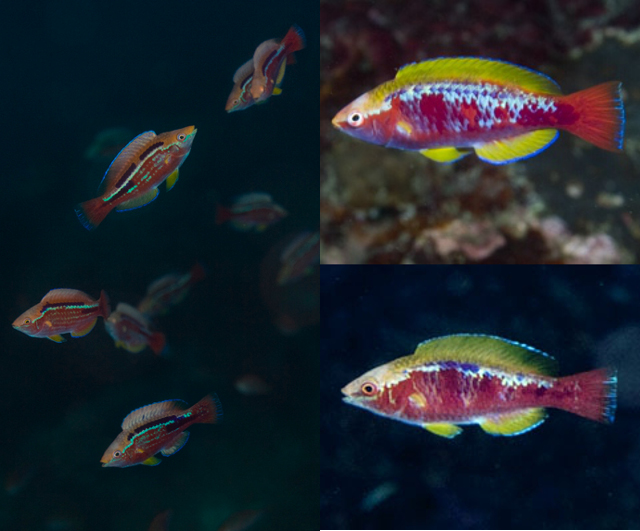 When the males of these two species are in their full nuptial display, the differences become especially apparent. In C. lubbocki, the body below the lateral line darkens to a deep red color, with the dorsal fin and nape brightening to a pinkish-white and the anal fin sometimes taking on a redder tone. On the other hand, the fins of C. cf lubbocki are always bright yellow throughout, with the body reddening and taking on a somewhat blotchy appearance due to the presence of four patches that are structurally different. These same patches appear when the fish becomes stressed or otherwise excited, and, in fluorescent imagery, these appear quite distinct. It seems that the reflective blue pigments are behaviorally controlled—recall that many other Cirrhilabrus are able to “flash” nuptial colors in this same way—and in these patches the blue color is momentarily turned off.

Records for the Indonesian C. cf lubbocki extend from the Java Sea near Jakarta and east to the Raja Ampats and Palau. The biogeographical distribution for this group is identical to that seen in many other reef fish complexes found in this region (e.g. Amphiprion frenatus & A. melanopus, Paracheilinus carpenteri & P. flavianalis) and correlates with a well-documented faunistic break known as Wallace’s Line, named after its discoverer, the famed 19th-century naturalist Alfred Russel Wallace. 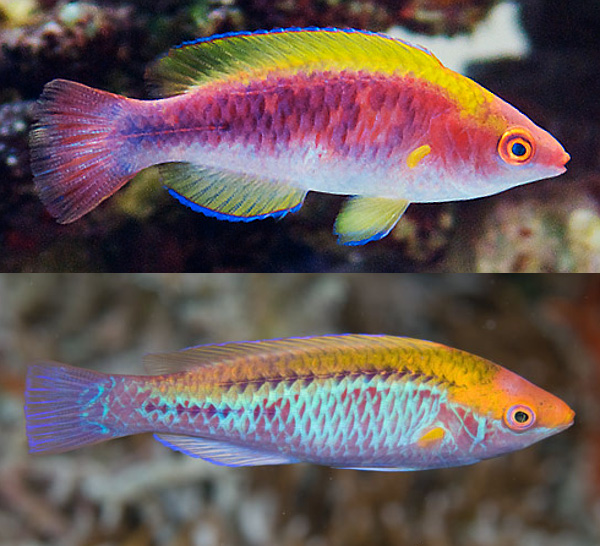 It’s entirely understandable that these two species would be conflated when they were first studied and described more than three decades ago, but how is it that they have continued to be mired in so much confusion and misinformation? At this point, thousands of specimens from both populations are collected annually for aquarists, and a large archive of in situ photography exists documenting these species in their natural habitat. Even though the variable nature of these wrasses has been documented for some time now, field guides and aquarium references have universally missed the mark when it comes to understanding why these differences exist. Cirrhilabrus is clearly a genus in need of considerable study, with even some of its most common and familiar members hiding new species in plain sight.

Finally, I want to take a moment to highlight the gentleman who this fish was named for, Dr Hugh Roger Lubbock. While aquarists likely only know his name thanks to this one wrasse, he was an author on many species descriptions in the 1970’s and early 1980’s, including familiar aquarium fishes like the Diadem Dottyback (Pictichromis diadema), Wheeler’s Shrimpgoby (Amblyeleotris wheeleri), Carpenter’s Flasherwrasse (Paracheilinus carpenteri), Bartletts’ Anthias (Pseudanthias bartlettorum), Laboute’s Fairy Wrasse (Cirrhilabrus laboutei) and many, many more. Roger Lubbock had a bright career ahead of him, and, by now, he would have no doubt studied and described dozens more species, but, in 1981, just a few short years after his first publication, his life was tragically cut short in a car accident at the age of just 29. We’ll never know what discoveries he might have made, but his legacy lives on with those species that he did describe in his short career, as well as several others that have since been named in his honor.