MACNA, the Marine Aquarium Conference of North America and MASNA, the Marine Aquarium Societies of North America are excited to announce our MACNA 2018 Keynote Speaker, renowned scientist Dr. J.E.N. “Charlie” Veron. MACNA is thrilled to be able to bring this international thought leader in coral reef conservation and research, as well as the first full-time researcher on the Great Barrier Reef (1972) to our event attendees as we continue to spread knowledge and education about the marine aquarium industry to hobbyists, trade professionals, and the general public through our MACNA event and the continued actions of MASNA in North America. 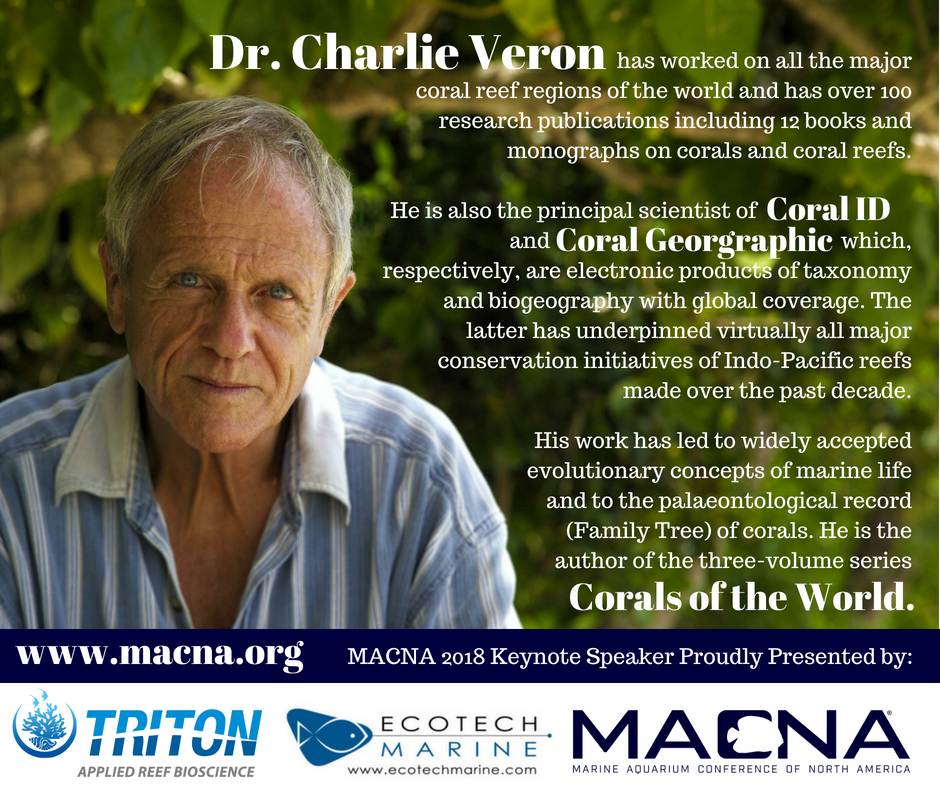 “Charlie” Veron has worked on all the major coral reef regions of the world and over 100 research publications including 12 books and monographs on corals and coral reefs. He is also the principal scientist of Coral ID and Coral Geographic which, respectively, are electronic products of taxonomy and biogeography with global coverage. The latter has underpinned virtually all major conservation initiatives of Indo-Pacific reefs made over the past decade.

His work has led to widely accepted evolutionary concepts of marine life and to the palaeontological record (Family Tree) of corals and he is the author of the three-volume Corals of the World (2000).

He is former Chief Scientist of AIMS and now has his own organization, Coral Reef Research, as well as several adjunct positions. He has received many professional awards including the Darwin Medal (International Coral Reef Society), the Silver Jubilee Pin (Australian Marine Sciences Association), the Australasian Science Prize, the Whitley Medal, and received special mention in the Eureka Awards.

Dr. Veron will be speaking during the Saturday Night Banquet at MACNA 2018 in Las Vegas, Nevada, September 8th, 2018. The banquet begins at 7:00 PM and will be held at the Westgate Resort and Conference Center. Banquet attendance is scheduled in advance and is either included with MACNA Full Conference Passes purchased by attendees (cost is $189) or purchased a la carte as space is available through www.macna.org/attend. Banquet attendees will have the pleasure of Dr. Veron’s Keynote Presentation, as well as witnessing the award of two MASNA awards, MASNA’s Aquarist of the Year, and the MASNA Award, as well as the recognition of the two 2018 MASNA Student Scholarship recipients.