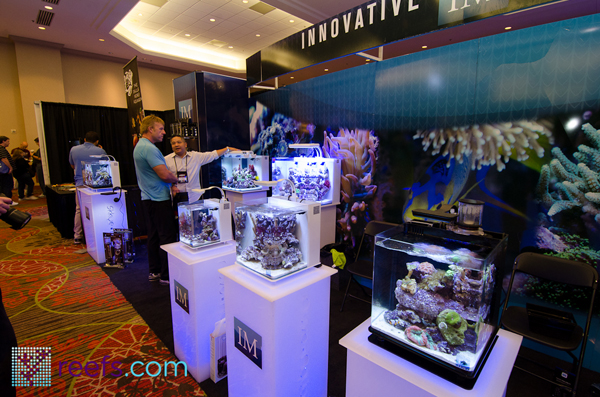 Innovative Marine is a relatively new company on the US market, however they offer a wide range of products for reefkeeping enthusiasts. Their booth at 2012 MACNA in Dallas showcased, amongst other equipment, a line of nano/pico aquariums. The sleek looking, modern design fish tanks are offered in several sizes and configurations, all sharing some key features, like one piece, bent glass sides and front, false-back filtration,tempered glass lids with clips and dedicated, clip-on LED fixtures. 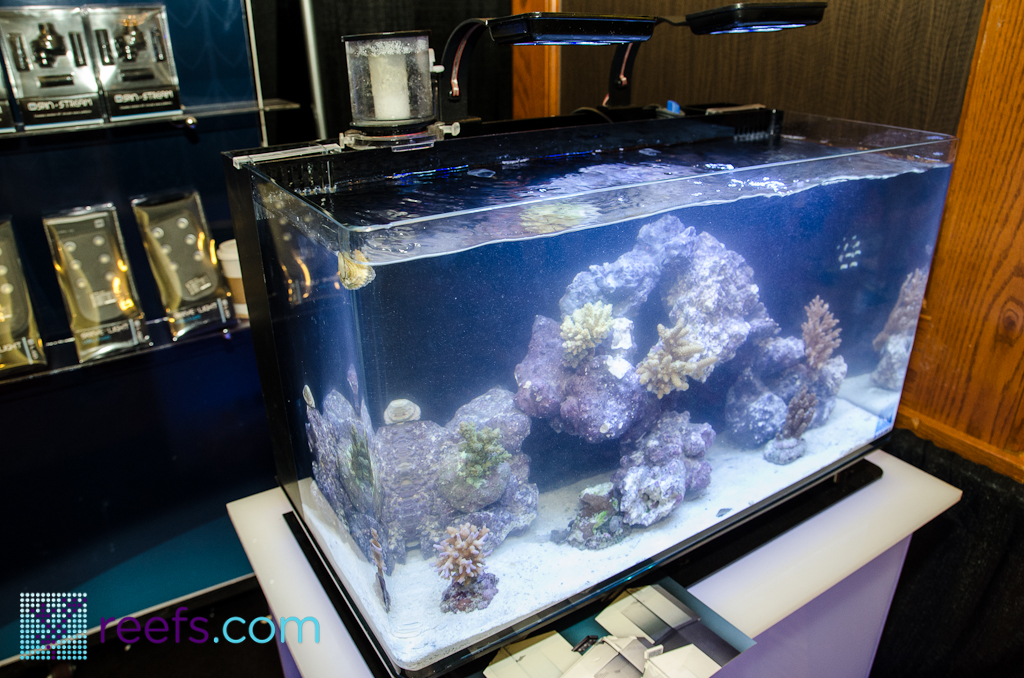 The line of tanks are called Nuvo Aquarium and are separated into two sub-categories- Micro/Mini and Pico/Nano. As the name suggest, Nuvo Mini is the largest of the four, comes in two color choices (black&white),measures 23.6x19x19″ and have a capacity of 38 gallons. 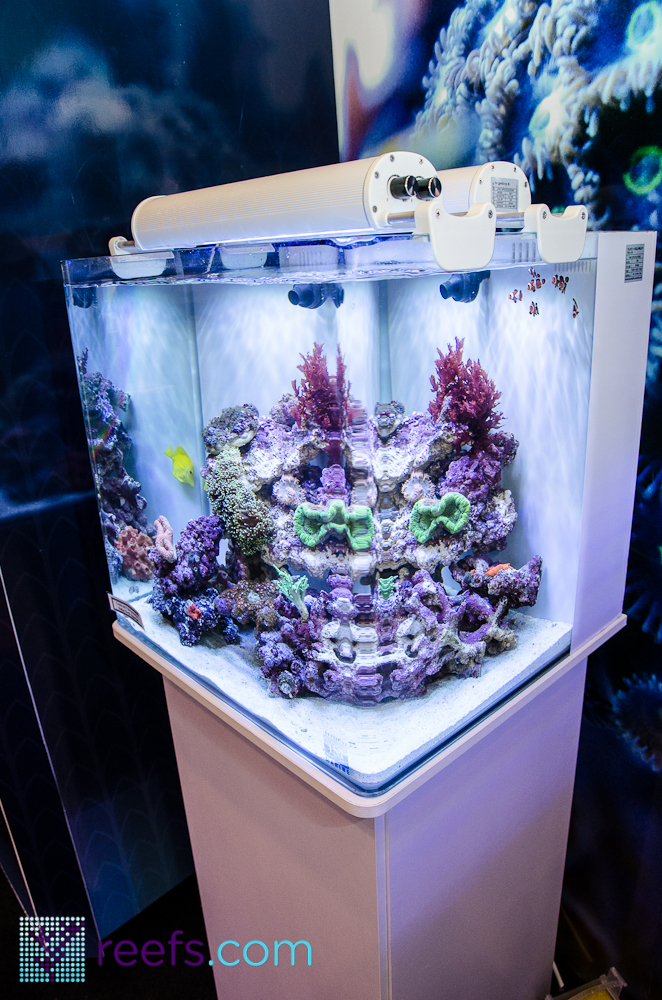 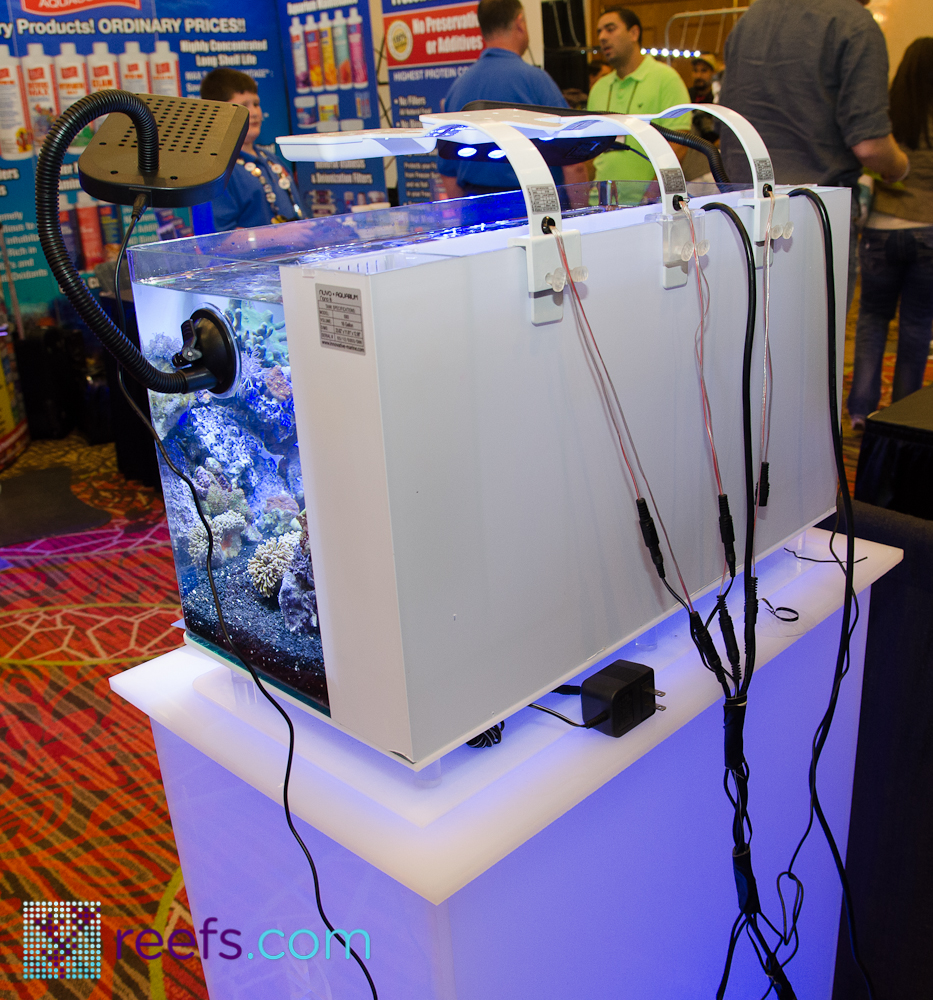 The slightly smaller Micro tank is a 19″ cube and holds 30g of water. Both tanks are built using 8mm glass and “false” acrylic wall, with out-of-sight filtration in the back. Speaking of, the back holds a return pump, a dual overflows, mechanical filtration chamber and dedicated heater and refugium columns. You can pair both tanks with matching wood stands and IM LED light (more on that later). 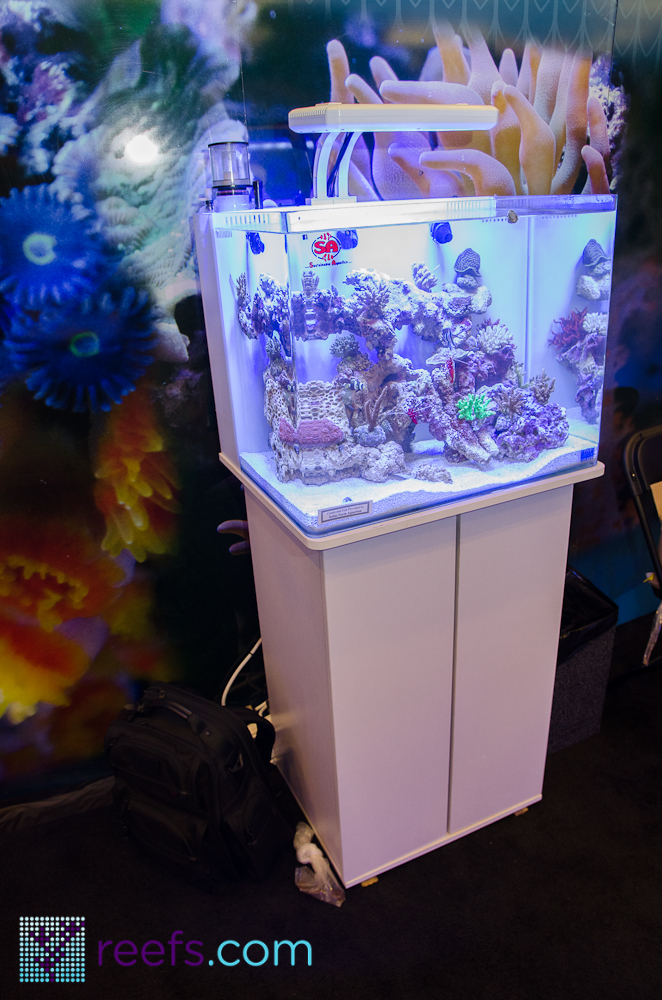 If mini tanks are still too large for you or if you have an evil plan on re-organizing that empty space on your office’s desk, Innovative Marine has three more models to offer. Largest of the three, 16g Nano is roughly 23.5x12x16.5H in size, then 8 gallon Nano measuring 12x12x15.5″ and finally the little 4g Pico that’s approximately 11x8x13.5. 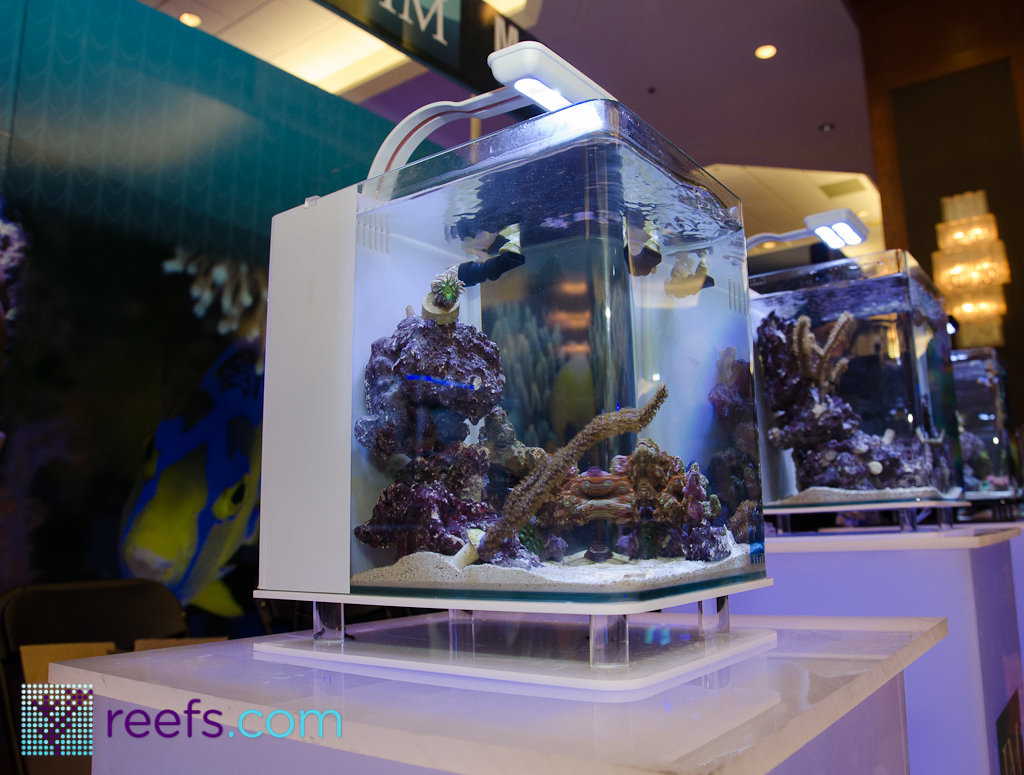 All three tanks sit on a transparent acrylic pedestal, making them appear larger than they are. The Pico/Nano series are similar to the larger Micro/Mini line in that they offer a false wall AIO filtration, a return pump, media baskets and dedicated LED fixtures. Additionally, the 16g system has a separate refugium chamber. 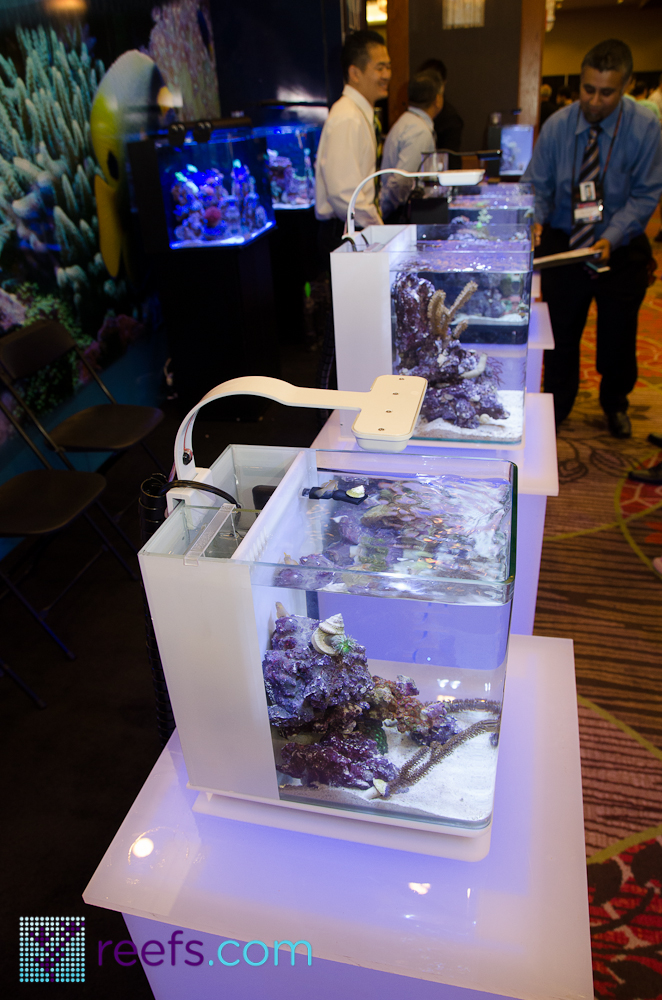 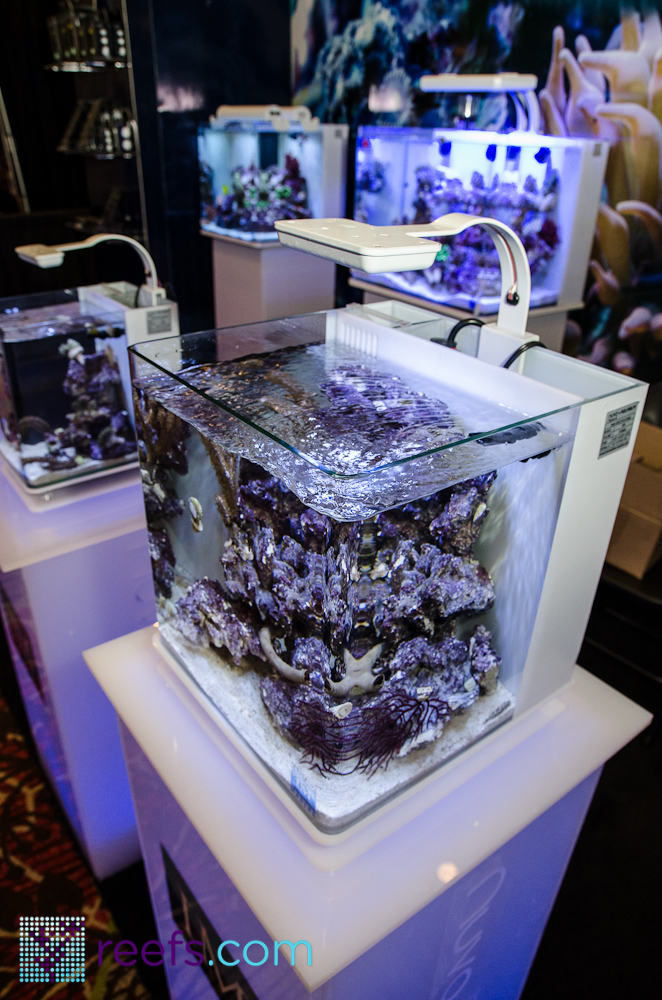 As I mentioned before, every IM tank has a dedicated LED light and you can combo it with the aquarium or buy it separately. For the MICRo/Mini line, IM offers a clamp-on back LED light called Skyee Light Tablet. The high power version boosts 92W of power, three independent channels for white, blue and sunrise/sunset and comes in two color ratios (10000K and 14000K). The other light in the line has 30W of power and two separate channels for blue&white diodes. 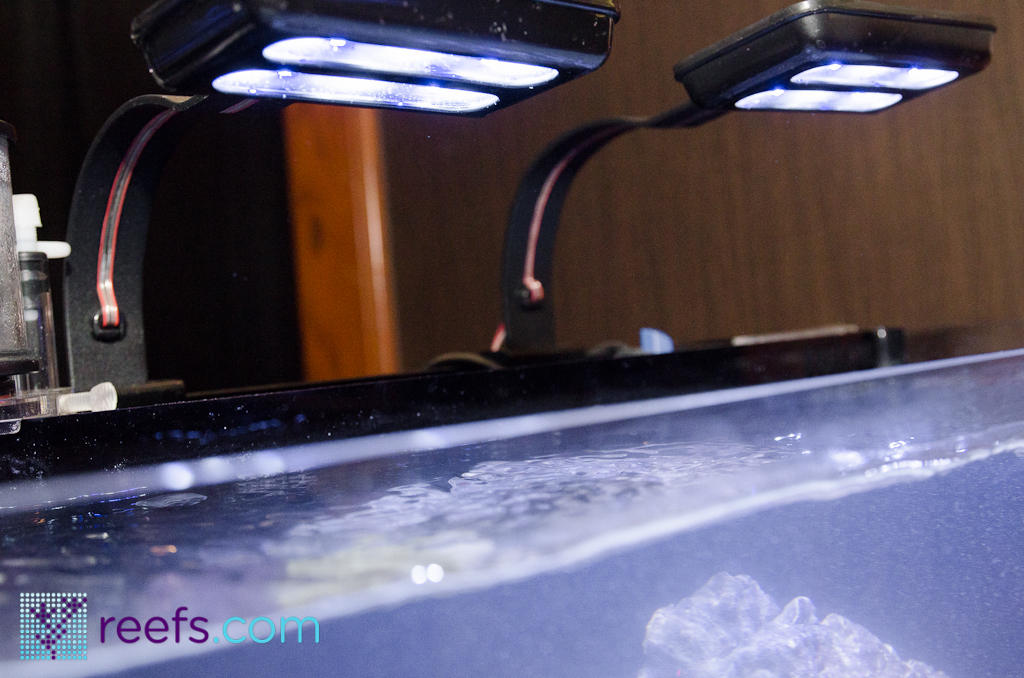 Finally, the Pico/Nano series can be equipped with a Skkye Light Clamp in either 8W/6 LeDs version or 4W/3LED one. Several color combinations are available for both lines. The LED light colors match the tank/stand coloration, making it one uniform design. 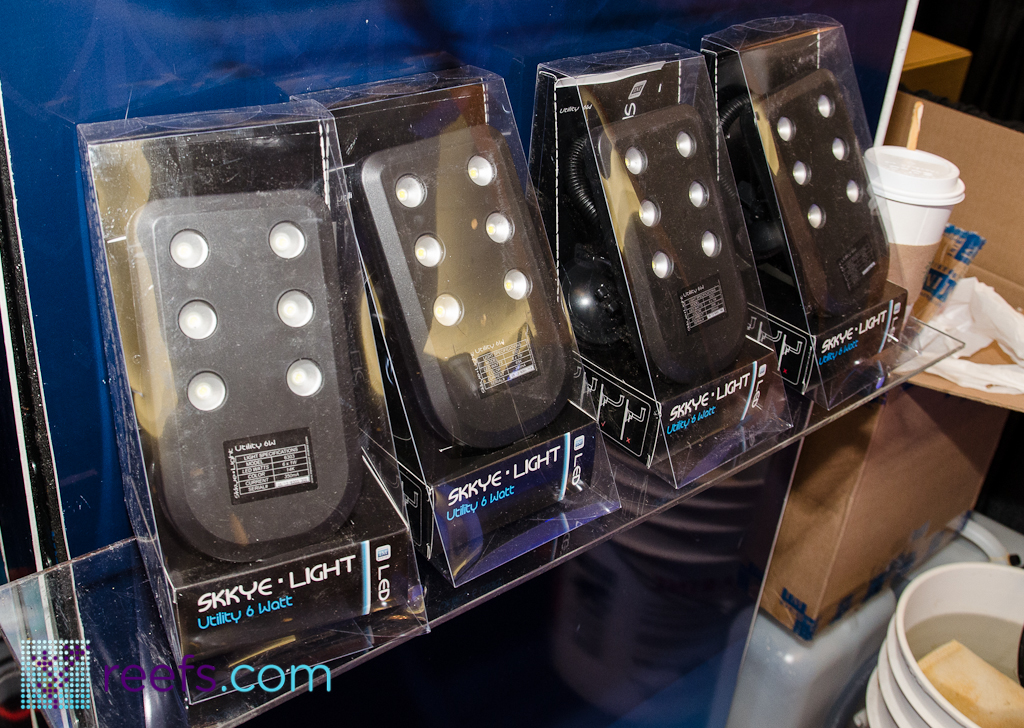 If you’re in a market for a small, All-in-one aquarium, check what Innovative Marine have to offer by visiting their website at:http://innovative-marine.com/