A Journey in Crinoid Keeping

About thirty years ago on my birthday, my father gave me a Metaframe aquarium with a pair of seahorses that he had bred. They were beautiful and I would stare at them for hours on end. He made sure I understood the important responsibilities that were required to keep them and some of the guidelines I would need to follow in order for them to thrive in my aquarium. I took these lessons seriously, and they still guide me today as I endeavor to expand the limits of my husbandry skills.

There are so many beautiful creatures available in our hobby today, but nothing takes my breath away more than the feather stars of the crinoid family. Whether they are perched out on a Gorgonian showing off their feathery arms, swimming or walking across the reef, these echinoderms had me star struck at first sight. I started researching information on crinoids and tried to find out as much as I could before I purchased one. When it came to keeping them in aquariums, there was little information to be found. Success stories are even less available. As a determined aquarist, my goal was to be able to keep them in captivity and so, I set out to develop my own guidelines for successful crinoid husbandry. I must caution you that this journey has been a complex and time consuming one, and I don’t recommend this path for all but the most dedicated of hobbyists.

Armed with at least some information, I tried in vain to find someone that actually sold feather stars. Searching local fish stores in my area, no crinoids were to be found. Each shop told me the same story: “They ship horribly” and “you can’t keep them alive for any length of time in your aquarium”. After much persistence, I finally found one shopkeeper who agreed to order some for me. He charged me slightly over his cost, but I had to buy whatever was brought in and I had to pick them up as soon as they arrived—the crinoids would not touch his system and he would assume no responsibility once they were in my hands. Essentially, he had nothing to lose by indulging me.

When the first shipment arrived, I excitedly brought the feather stars home and started to slowly drip acclimate them. There were immediate losses from shipping and further losses within the first 48 hours. What would happen is the crinoids would start dropping arms and then completely fall apart. At that point, I started to understand why the local shops do not bring them in, and the scope of the challenge I was in for. Disheartened perhaps, but I wasn’t discouraged as I still had three surviving feather stars, so my journey continued.

After my initial losses, the first challenge was to get them feeding. Since I know crinoids are suspension feeders, I tried as best as possible to replicate their natural diet. My research indicated that their diet consisted primarily of detritus, plankton and inorganic particles. In an attempt to provide these, I setup in the last chamber of my sump a large mesh bag filled with bio balls. This bag would collect detritus throughout the day. I would turn the skimmer off and shake the bag and let the detritus flow into the main display. After about an hour, I turned the skimmer back on. I did this several times throughout the day. Additionally, live marine rotifers, brine shrimp nauplii and phytoplankton would be fed directly to the crinoids. Each day I would observe their feeding and general behavior trying to figure out what they reacted to. I also continued to experiment with different types of food, adjusting my power heads to create different flow patterns and generally tweaking my husbandry practices. Sadly, I did lose those three crinoids, but I learned a tremendous amount each time I lost one and began to better understand my failings in keeping them.

Attempting to keep difficult animals is a bit of a controversial subject with some, and understandably so. I’m of the belief that if you are a hobbyist of considerable experience and are prepared to make a sincere commitment to the task and go above and beyond in your efforts to succeed, then your efforts are the only way to push the hobby (and knowledge base) forward. It is in this spirit that I continued my journey and ordered more feather stars from the local dealer. 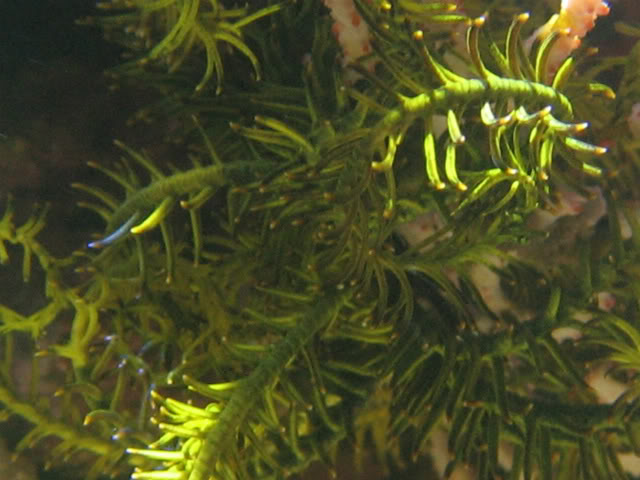 Today my oldest crinoid is 2 1/2 years old and I currently keep a total of ten in my aquarium. What follows are my current practices and observations that seem to be yielding success.

A key factor in crinoid survivability is ensuring they go directly into a very stable aquarium. Crinoids do not take kindly to unstable parameters. They require pristine water quality— a fact you need to actively work at given the heavy food demands of these animals. I believe in heavy skimming and large water changes to help control nutrients. Currently, I change a minimum of 25% of my aquarium’s volume every Wednesday and Saturday using the ESV B-Ionic Seawater System as my salt of choice. Specific Gravity is maintained between 1.0225-1.026. I mix the total amount of water I am planning to change, and then perform slow, small water changes, changing one gallon at a time. Although this is rather tedious, it works well and doesn’t shift the aquariums parameters around too rapidly.

Crinoids are also very sensitive to shifts in temperature and adequate cooling and heating systems are a must. Do your best to keep the tank temperature below 76 degrees. I target 73-74 degrees in my system. 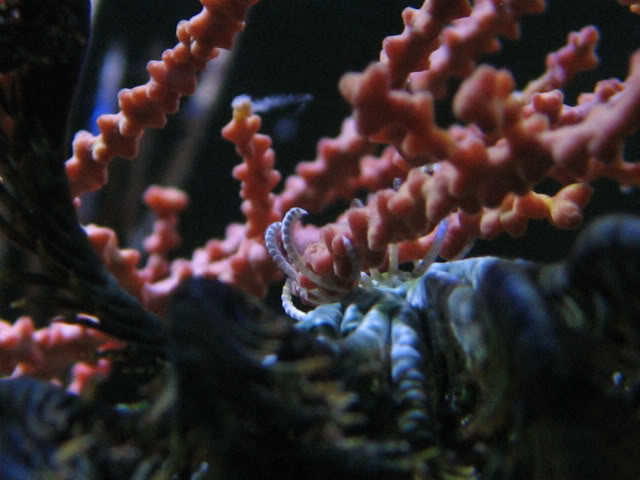 Feather star holding onto a Gorgonian via use of it’s cirri.

Water flow and appropriate current patterns are also essential for maintaining suspension -feeding organisms like crinoids. When crinoids feed, they form a filtration fan with their arms to catch their food. The shape of the fan varies depending on the species and the type of current in the aquarium. Feather stars will move throughout the aquarium until they find their preferred feeding spot. Keep in mind just as different species form different filtration fans, they also have different feeding behaviors and likely favor different prey items. Some species will hide all day, only exposing a few arms and then fully emerge at night. Others tend to be exposed all day long on the reef. 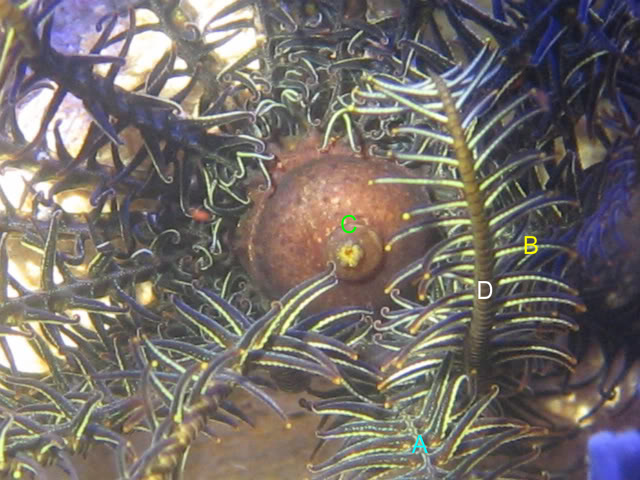 Realizing the habits and inclinations of the animals will greatly help you in getting the feather stars to feed, but what to feed them? One of the great things about our ever-evolving hobby is the regular introduction of new products and feeds that help simplify once daunting challenges and there is now a wide range of commercially available foods appropriate for feather stars.

Crinoids need to be fed continuously throughout the day, and can feed gluttonously if given the opportunity. Several methods must be used to accomplish these goals. First, direct or target feeding via a turkey baster or pipette will enable you to “shower” the crinoid in food ensuring it can eat a large quantity at one time. To provide a continuous supply of food, I prefer an auto feeder that regularly dispenses portions of fed throughout a 24-hour cycle. If you are using liquid foods, they can be dosed either manually or via a time released peristaltic dosing pump. 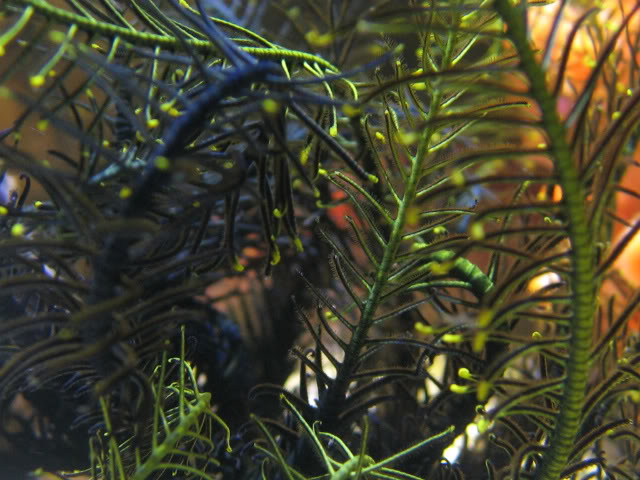 To this day, feather stars are difficult to find in most aquarium shops. You may want to ask your local fish store to order them or you can search on-line. If you are looking to purchase them by mail order, try to avoid prime summer time purchases of crinoids since even with the aid of cold packs, they do not do well.

Commensal squat lobsters can be found as hitch hikers with crinoids. They live within the arms of the crinoids and enjoy stealing minimal amounts of food from them without harming the crinoid. Two of the more common crinoid hitchhikers are Galathea inflata and Allogalathea elegans. They are also available separately in the aquarium trade, so if you have a feather star and are interested in purchasing a squat lobster you can do so. 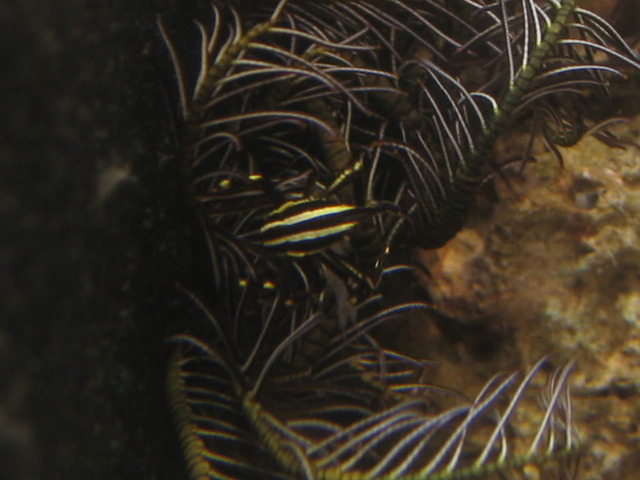 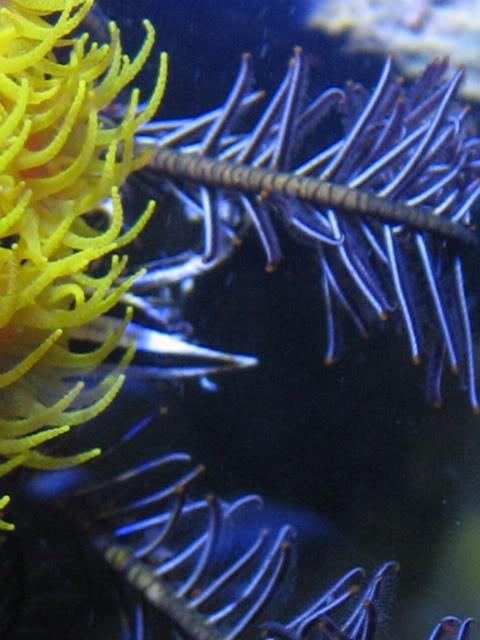 With good husbandry practices and dedication, these interesting echinoderms are possible to keep in a home aquarium. Getting them to breed is the next step in this journey in crinoid keeping.