Having a green thumb is the term that is often assigned to people who are good at keeping indoor and/or outdoor plants, whether they be for consumption or their attractiveness. However, when it comes to keeping or maintaining a beautiful coral garden in a closed system there doesn’t appear to be a similar term. I suppose we could say that a successful reef keeper could be called one who has a salty thumb. I’m not sure that that however is very descriptive. Joe Yaiullo, a long time ago when reef keeping was in its infancy coral reef keepers were called coralaholics, but I’m not sure that will do either. Hopefully, in time, someone will come up with an appropriate term.

As many of you know, over the last 60 years I have edited three publications – Marine Aquarist, Aquarium frontiers, and currently the Advanced Aquarist – and have also written numerous articles and editorials. I have always held to the same editorial belief: the most valuable information that can be utilized by a successful aquarist comes from solid scientific research. Furthermore, incredible technological advances that our species have created over the last several hundred years is a direct result of the scientific method. This is the editorial position that have always believed in and to this day, despite the ignorance of folks like Donald Trump, still do. Nevertheless, the biochemical makeup of a closed system reef tank is incredibly complex, and often the reef keeper familiar with scientific studies applicable to reef keeping are not yet fully able to explain exactly what is taking place between the walls of an aquarium be they plastic or glass or some other material. 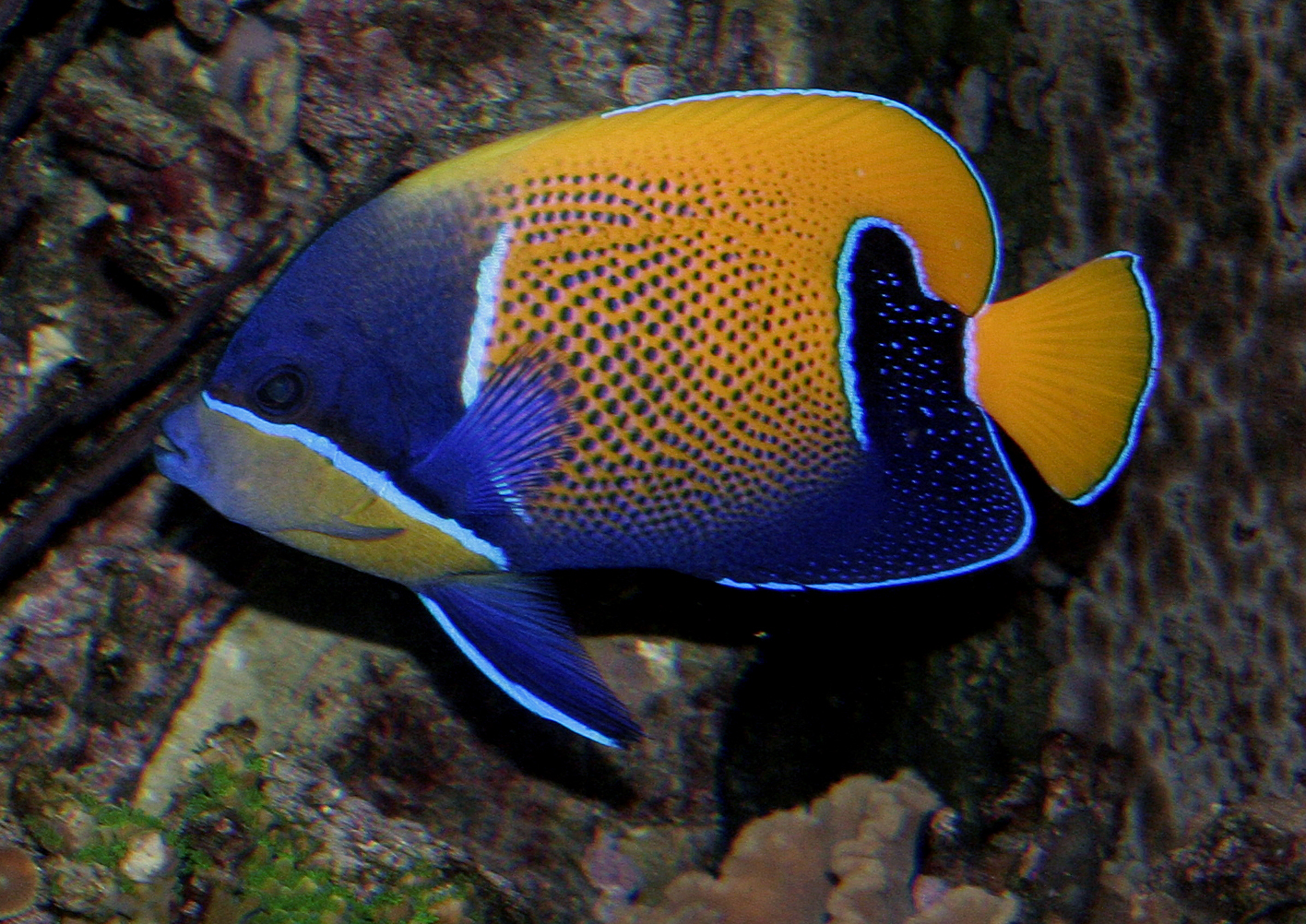 So, getting back to our successful reef keeper, what contributes to that success apart from current scientific knowledge? It is here that one out of necessity returns to anecdotal knowledge. There is a difference between what a successful long-term reef keeper has to say compared what a newbie believes. In this regard, I believe that careful observation of the occupants of one’s reef tank is of paramount importance. The next question of course is what is meant by careful observation?

To begin with, it is essential that the reef keeper become familiar with the various animals kept in his or her reef tank. Most marine aquarists know what to look for regarding the general health of their fish: the rate of breathing, eye clarity, healthy fins, a full belly, and certainly the absence of parasites on the surface of the fish. However, when it comes to invertebrates what to look for regarding the general health of the reef tank is less obvious. To put it another way, how can one tell when the quality water is beginning to deteriorate and some inverts are not flourishing? 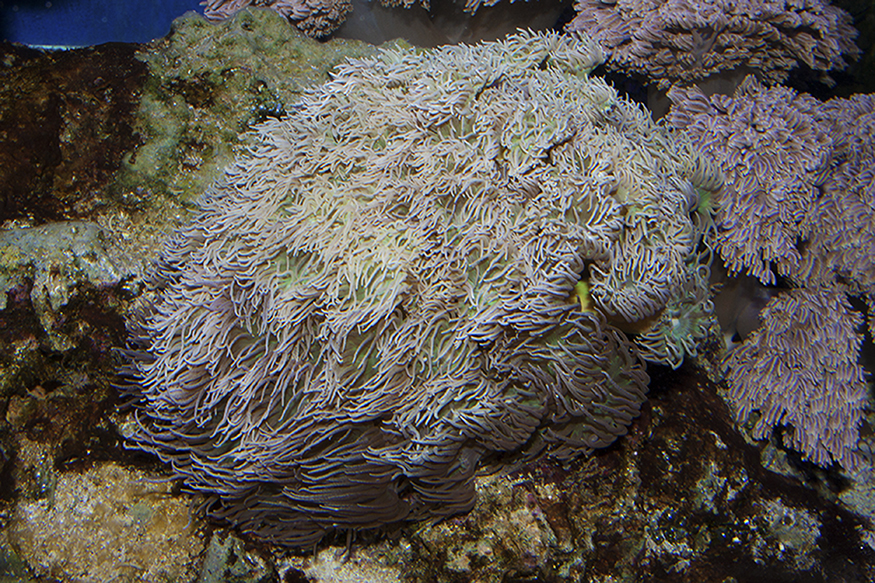 A healthy coral, Duncanopsammia axifuga. Incidentally, I grew this specimen to this size from two polyps in less than a year by feeding it Mysis shrimp.

Most successful reef keepers consistently measure or are aware of by virtue of various meters the temperature, pH, alkalinity, salinity, strontium, magnesium, and whatever else that is easily measurable. Also, conscientious aquarists keep track of waste products like nitrates and phosphates. For example, despite the fact that I feed my fish well I keep the nitrate level down to a point where it is unmeasurable, and when my phosphate level begins rise I use Two Little Fishes Phosguard to keep that concentration below 0.1-ppm. Nevertheless, from careful observation I have noted that in my reef tank in spite of the fact that all of the parameters mentioned are satisfactory, even nitrates and phosphates are barely measureable something or things are beginning to deteriorate. Still, whatever it is I cannot measure, but something is not perfect, at least from what my eyes tell me. 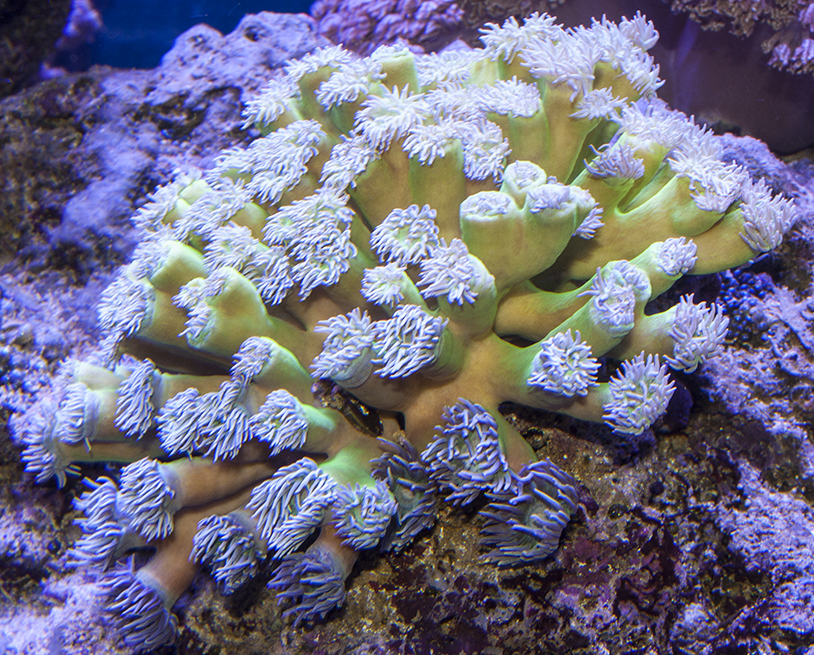 The same Duncanopsammia axifuga with its polyps not fully extended, is a possible cause of concern.

In general, one indicator that seems at least for me to best indicate the general health of my reef tank with its capacity to permit a wide range of corals to flourish is polyp extension. Most corals expand their polyps for the purpose of capturing food. Most reef keepers are aware of this, but there are subtleties that have to be considered. For example, most gorgonians contract their polyps periodically and may not be a very good indicator of the general health of the biochemical condition of one’s reef. Still, if over a period of time the aquarist notices that his or her gorgonian is remaining closed more often than it did in the past, then perhaps there is something to be concerned with. Yellow alert!

Hermatypic corals will always extend their polyps when healthy for the purpose of feeding and their symbiont’s photosynthesis, but there may be reasons other than water quality, circulation, or lighting that need to be taken note of if they do not. In my reef tank, pictured here, I have two angelfish: a bicolor and a P.novarchus both of whom often pick at certain corals. As a result, when the lights are on and the angelfish are active many of these corals to protect themselves will not extend their polyps. I will therefore, with the aid of a flashlight, observe them when the lights are out and if the polyps are still retracted or not extended as they have been when particularly healthy this becomes for me a red light. Something is wrong. 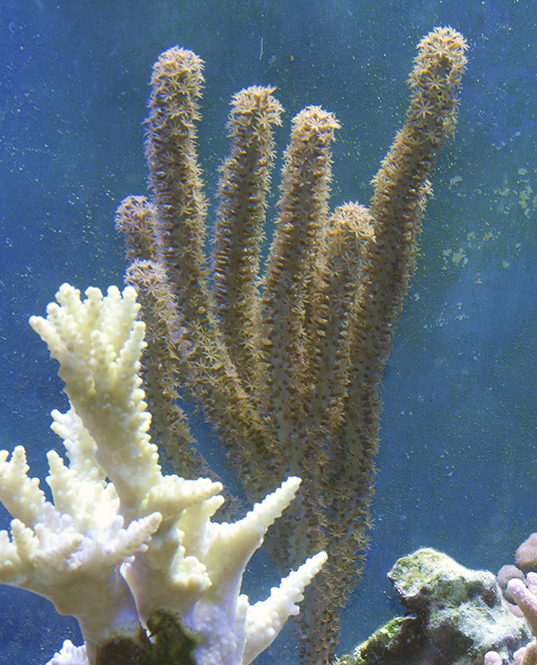 When healthy this gorgonian has its polyps extended most of the time; the same for my Euphyllia ancora:

I am well aware of the fact that what I am talking about in terms of observation is often influenced by variables or should I see the interplay of variables that are hard to be sure of. The variables that I am referring to are things like the source of artificial light, the clarity of water, light spectrum, water circulation, chemical concentration of the various major and minor elements of the seawater, nutrition, and one could go on almost indefinitely when considering all of the potential variables. Nevertheless, with careful observation, and knowing what to look for, successful reef keepers generally can tell when the inhabitants of their reef tank are doing well or are deteriorating.

When I suspect that something is not quite ideal for the general health of my corals, firstly I begin a regime of changing 25% of the water every week. In my experience, things begin to improve after two or three rapid water changes. I am well aware that there may be factors that I am not aware of, and that my water changes which appeared to bring about an improvement were not the decisive factor.

There is one other issue that I think it is important for reef keepers to keep in mind, that is, temperature. Over the years there have been numerous reports from very experienced reef keepers that rapid tissue necrosis (RTN) rears its ugly head so to speak of, when due to seasonal changes the temperature of the water in some reef keeper’s tanks rises to 80-degrees or more. Generally, I try to keep the temperature of my reef tank at about 77°. As summer approaches to keep the temperature from rising too rapidly I use fans, but that approach is far from my ideal. Furthermore, I have a suspicion that in close system reef tanks temperatures over 78 or 79°F begin to cause problems. Another suspicion is that the Zooxanthellae, (photosymbiotic dinoflagellates) vital to many of our reef animals begin to, at temperatures higher than what they are used to, release a toxin. I know that this happens in the wild, but usually at temperatures 83°F or above. It may be that zooxanthellae in captivity are more susceptible to temperature change then they are in the wild. Please understand that this is purely conjecture on my part. It is my hope that scientists will explore this conjecture or beginning hypothesis to see if there is any merit to it. Bottom line is that a chiller is more of a necessity than many reef keepers believe. I’m looking forward to any and all insights into this issue. 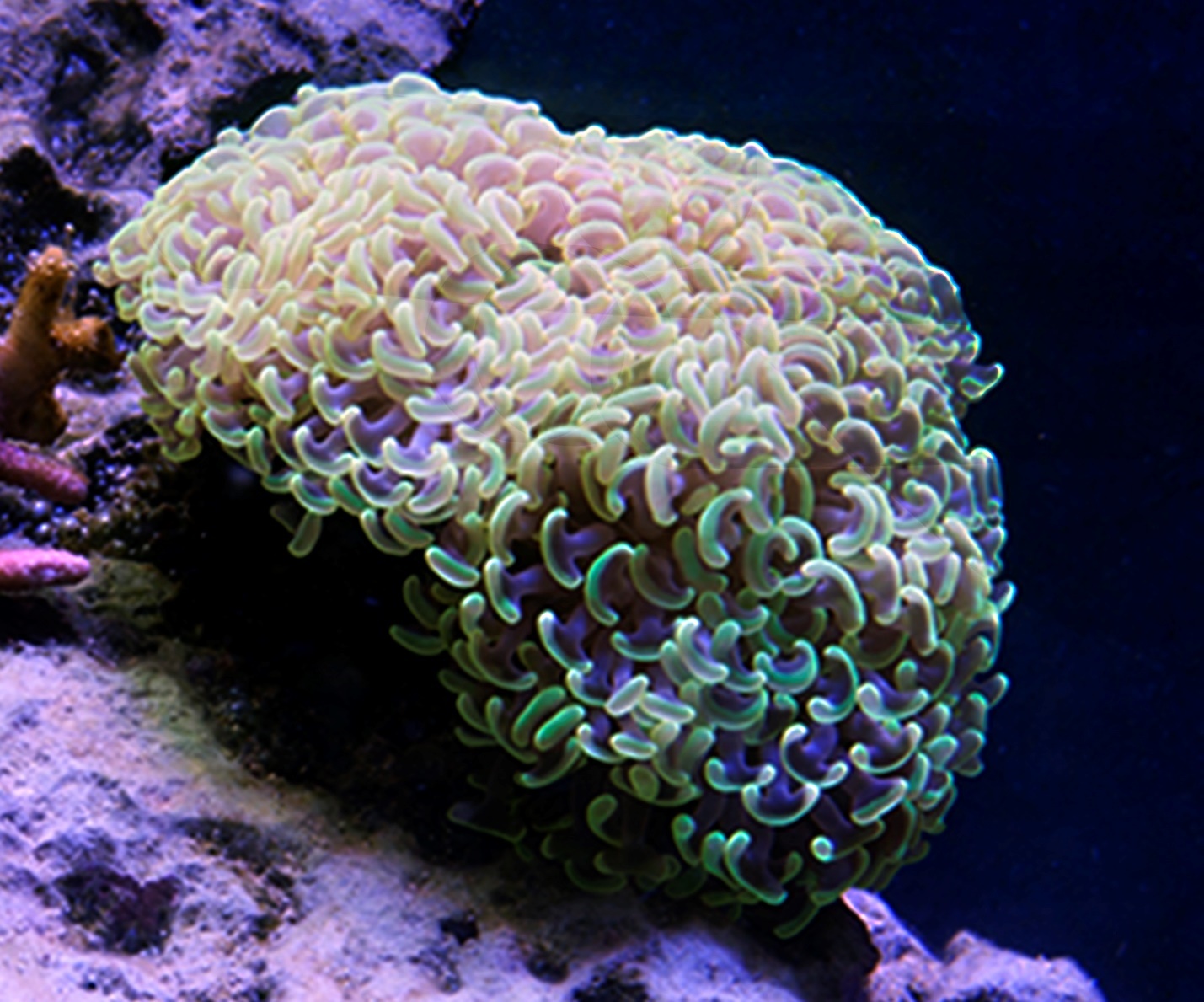 Recently, visiting a friend in Jacksonville Florida, in an industrial Park I discovered a remarkable aquarium store that specializes in marine fish and invertebrates. Although over the years I have visited many such stores this one is by far the most beautifully kept. Although this store has the usual complement of dry goods it is the quality and health of its fish and invertebrates that is striking. Not surprisingly, the owner a man whose name is Eddie Miller was an experienced hobbyist before he entered the aquarium business. From the following photographs is quite clear that each tank shows offered specimens with only the kind of care that a person who really cares about these critters could give them. I must apologize, however, about the quality of the photographs. All of the pictures that I took, I took with my iPhone, and as can be seen from the photographs particularly of the reef animals I was unable to compensate for the fact that the tanks were illuminated by LEDs where the color spectrum emphasized the Violet and blue part of the color spectrum. However, in the fish only tanks such was not the case. 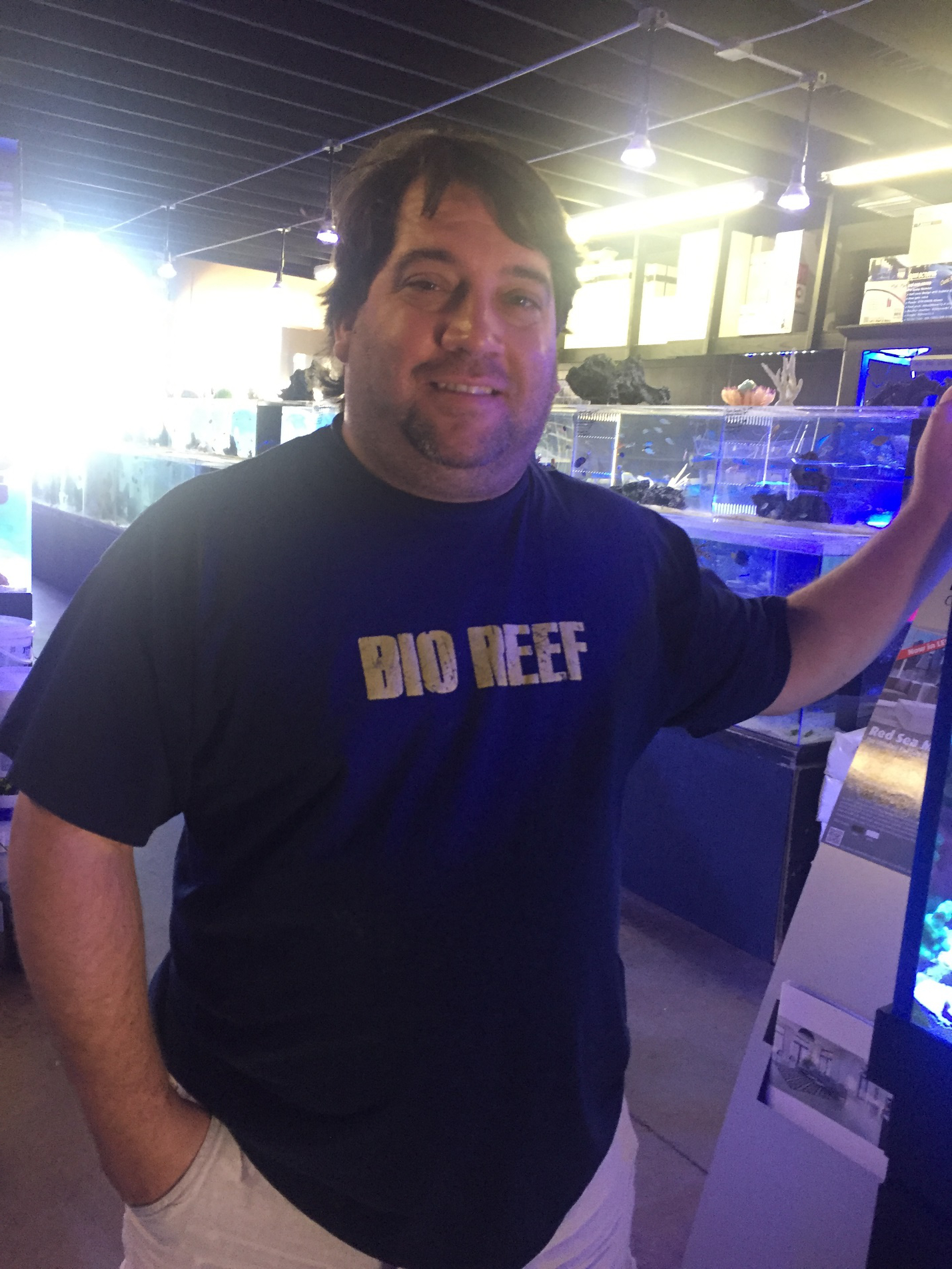 Should you be anywhere near Jacksonville Florida I strongly recommend that you visit this store. It is open Monday through Friday from 11 AM to 7 PM, Saturday 10 to 6, and Sunday 12 to 5. 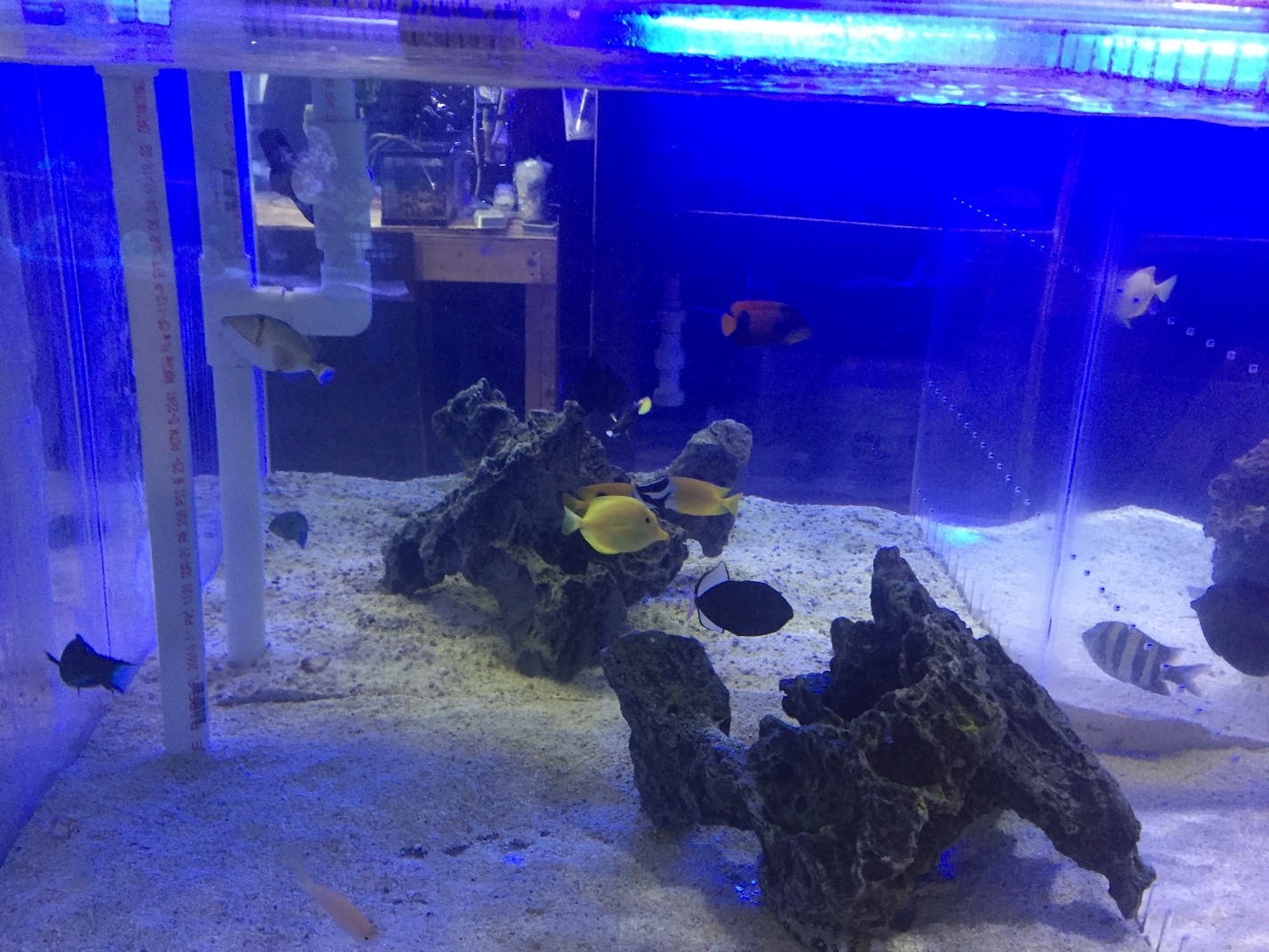 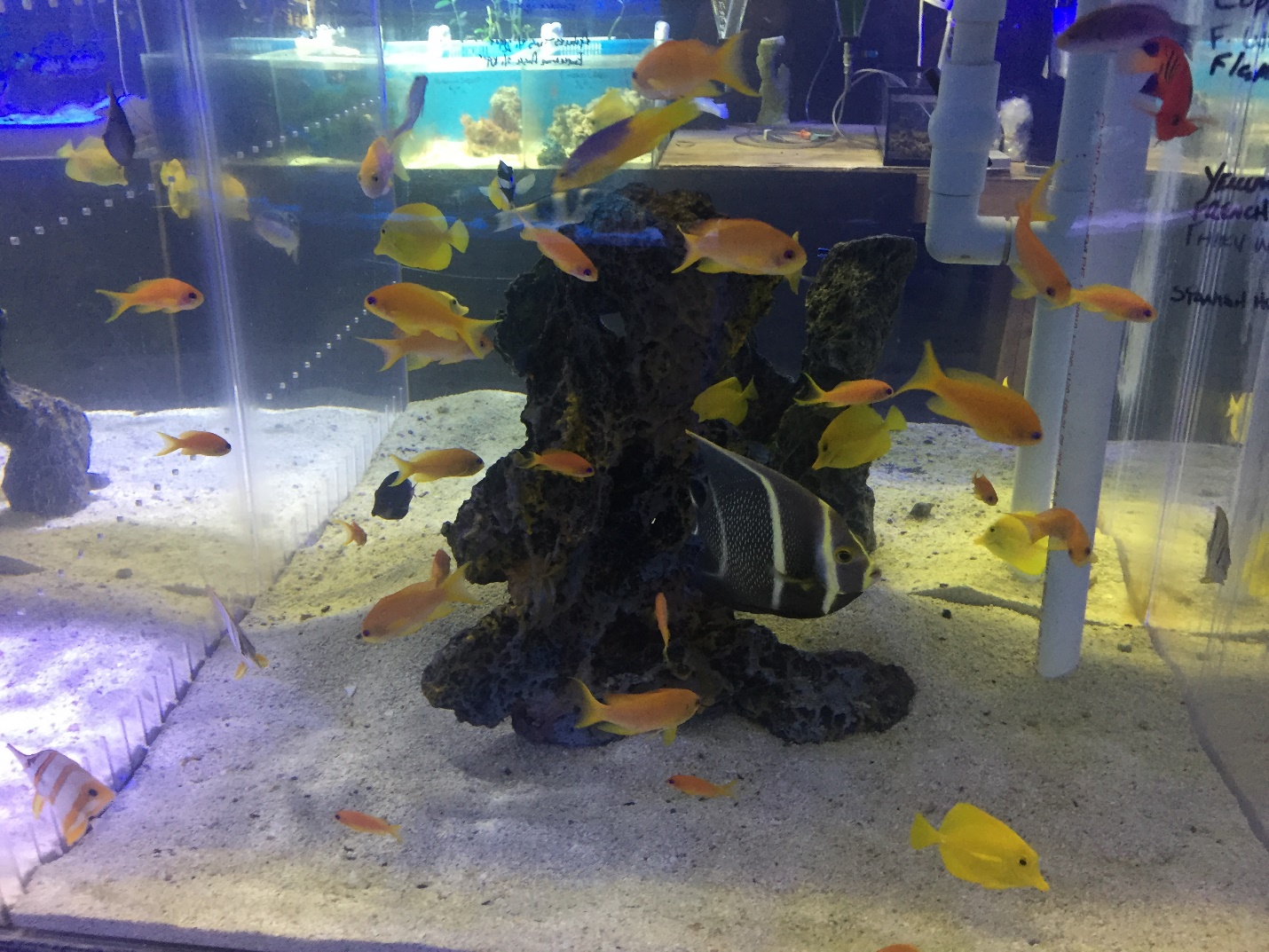 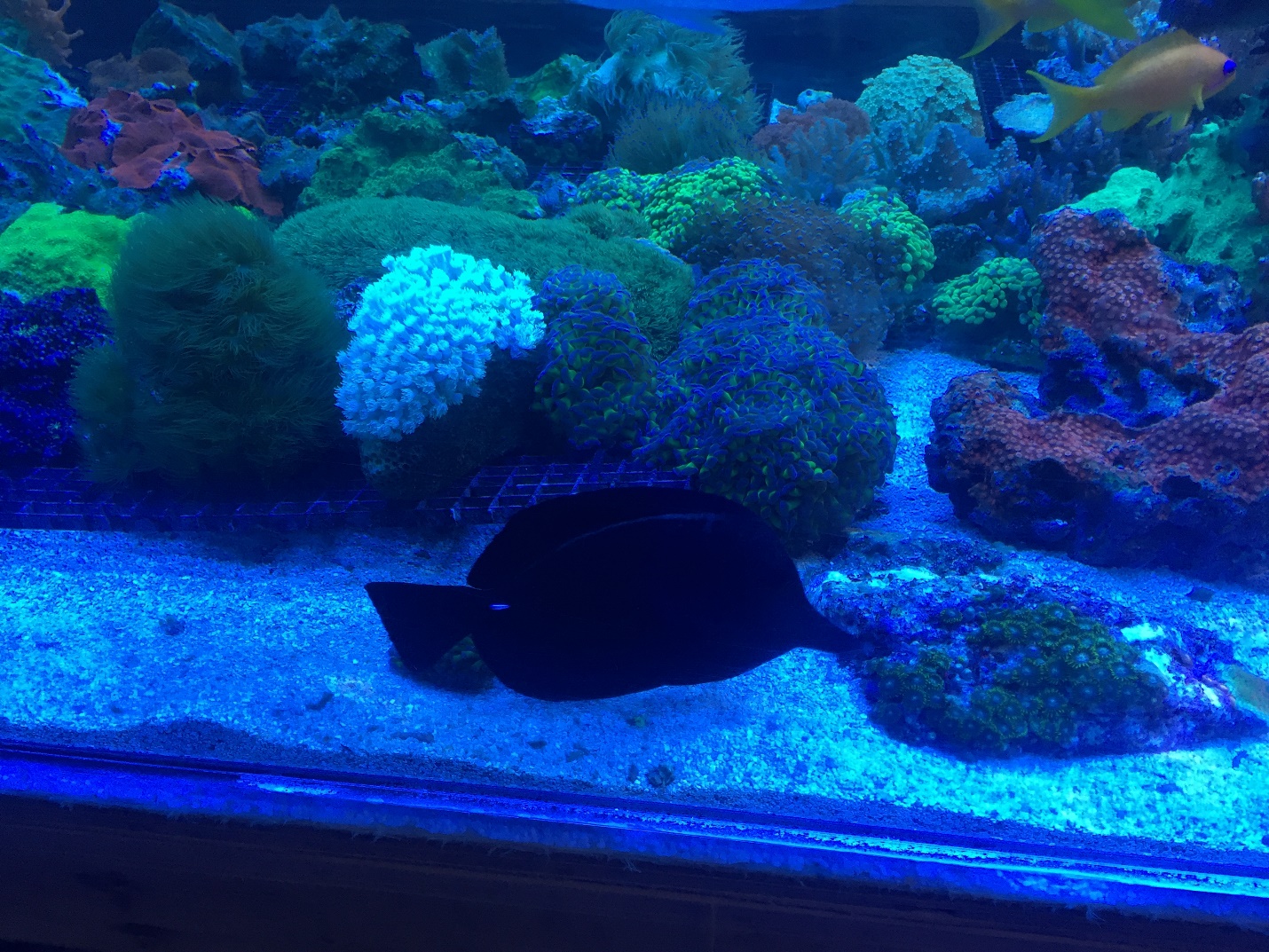 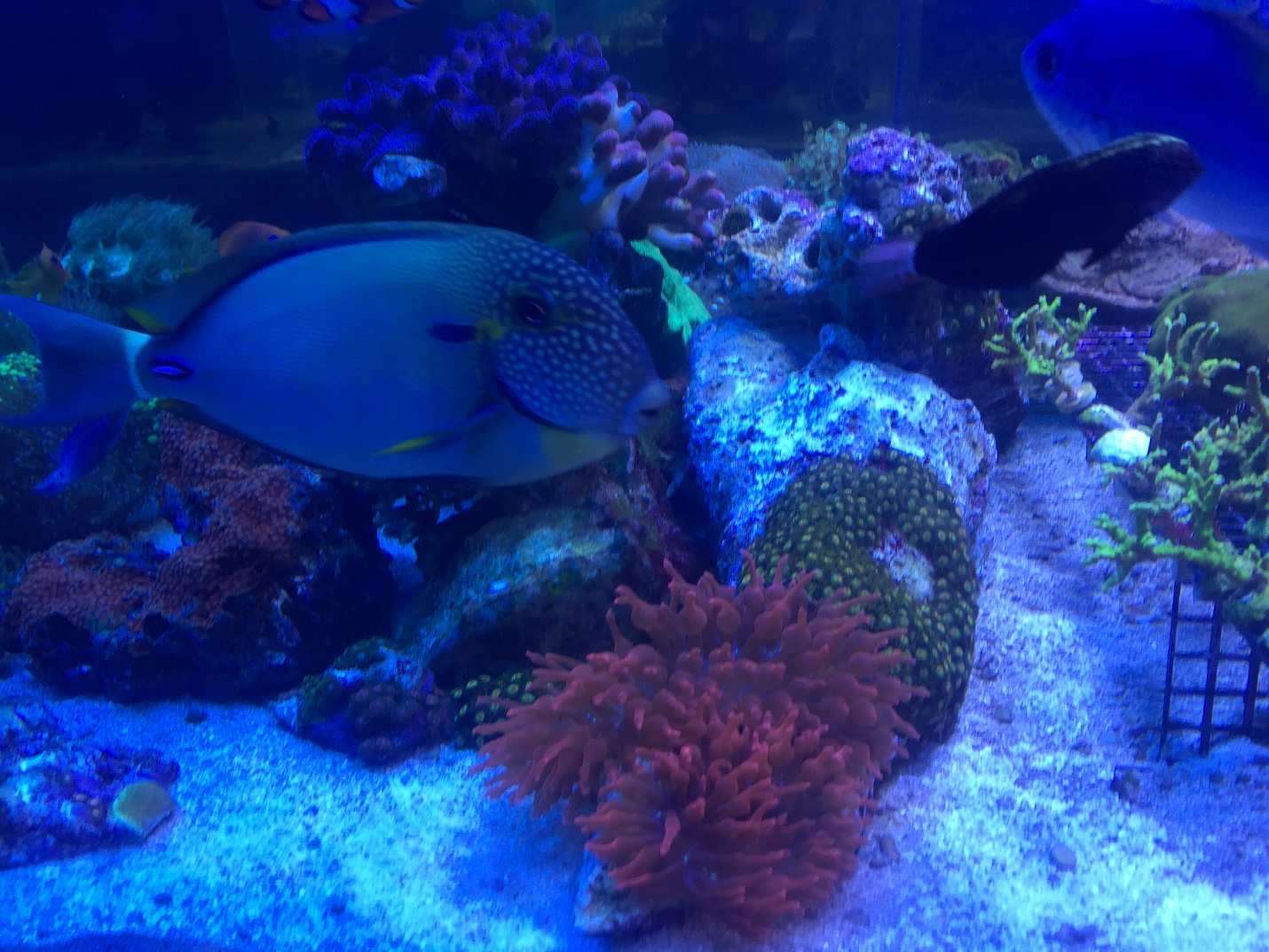 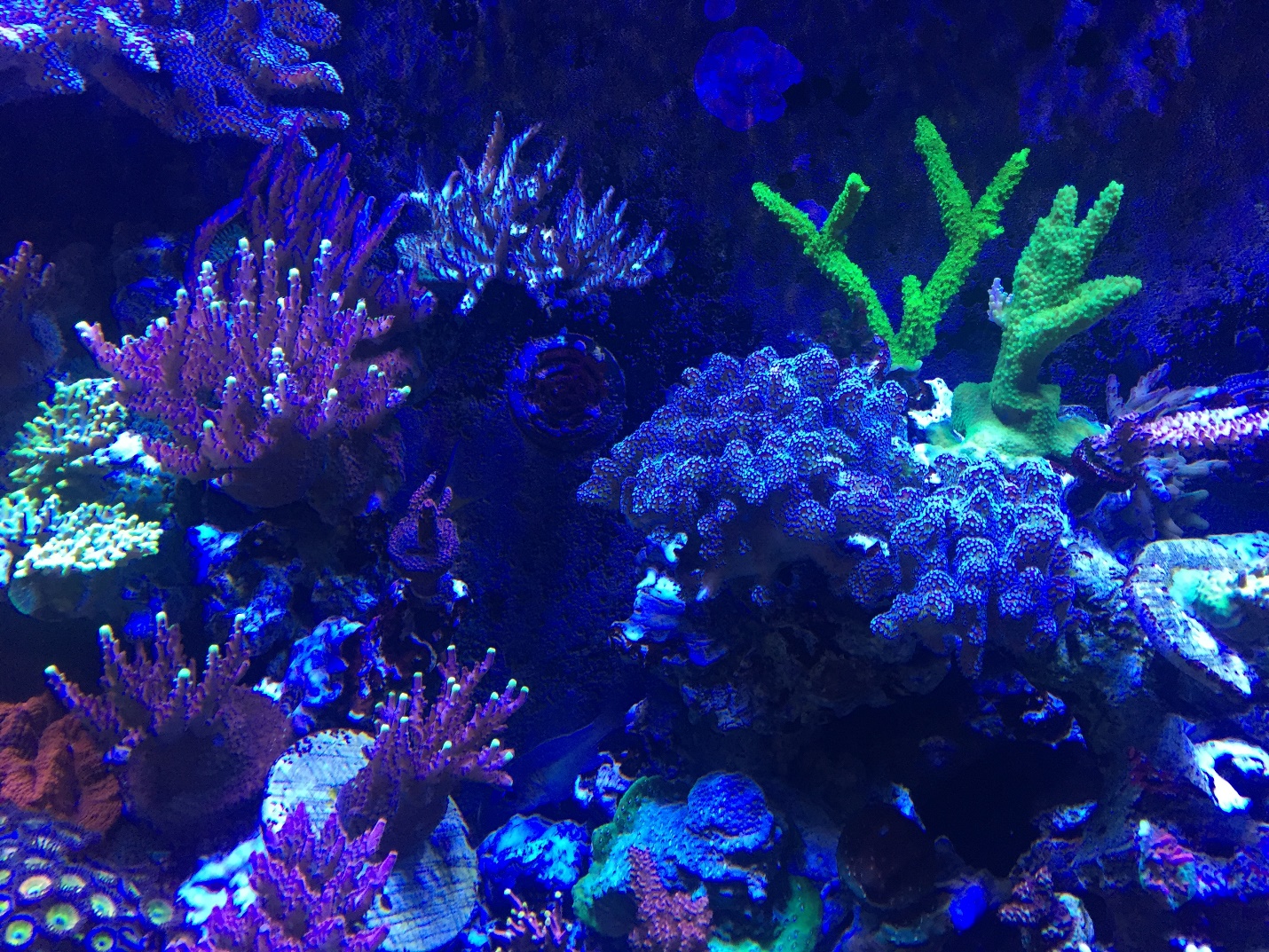 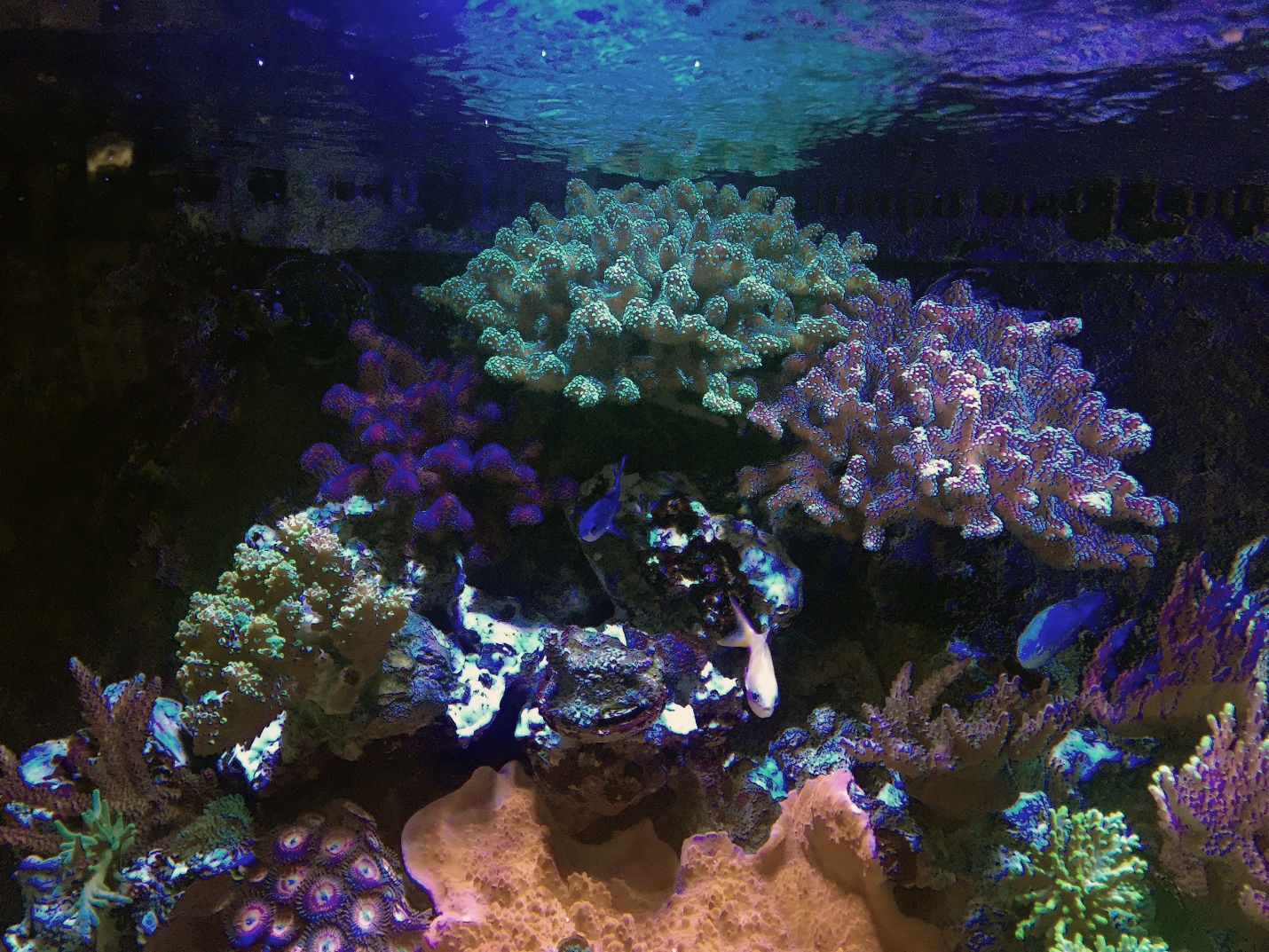 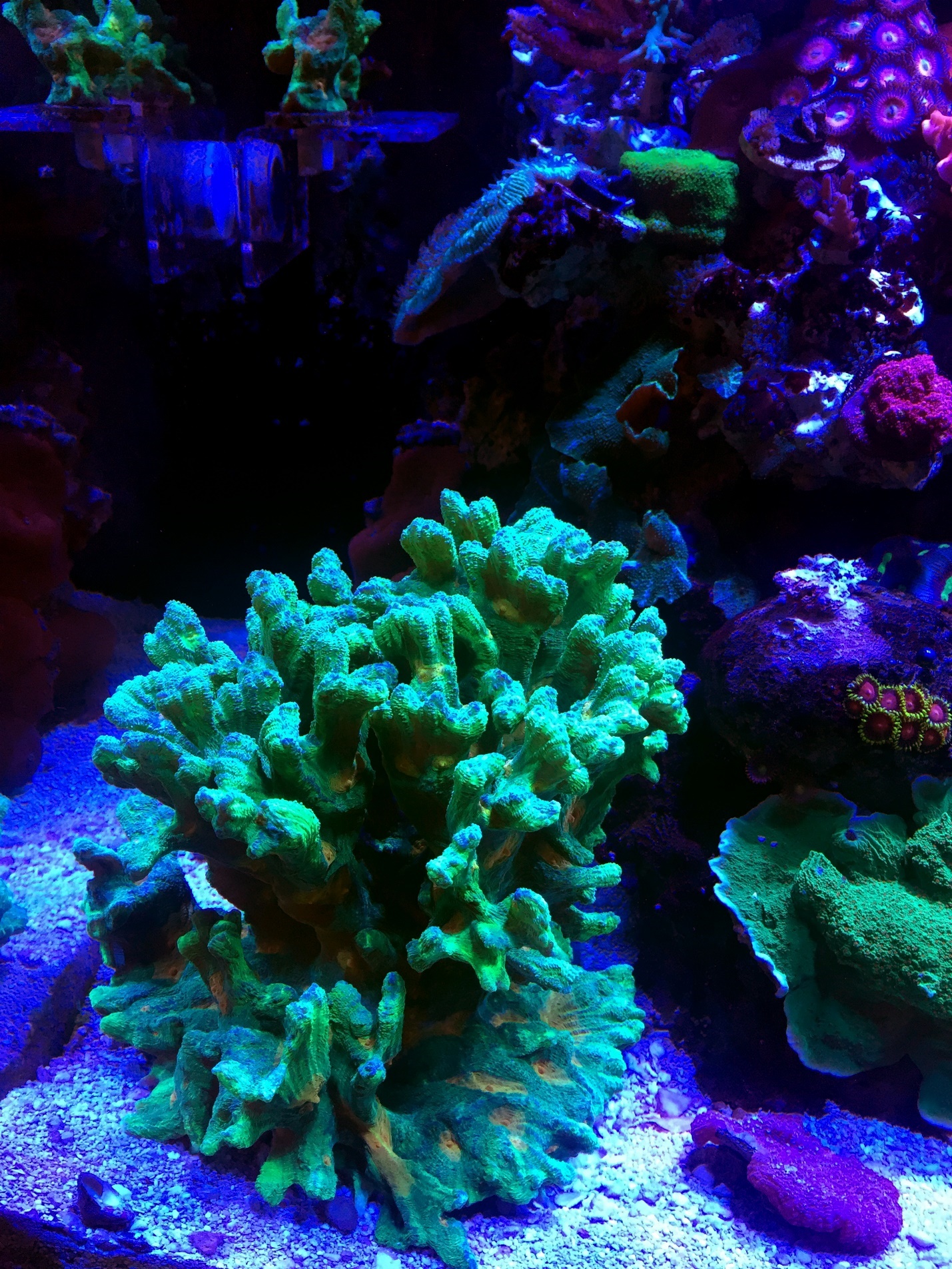 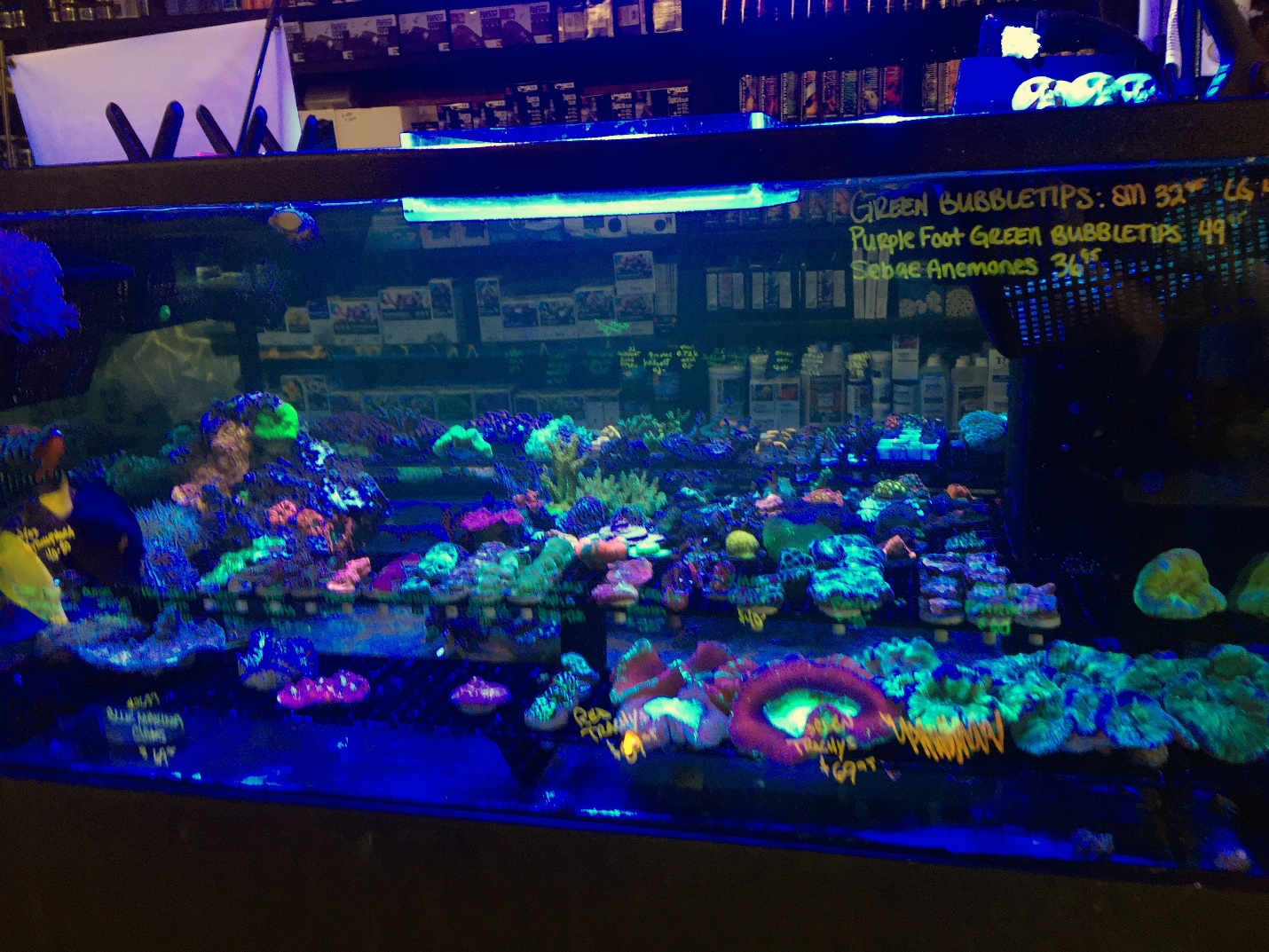