Light-emitting diodes (LEDs) are no longer a novelty in the reef aquaria lighting arena. As more manufacturers enter the market, competition drives prices down making them an attractive lighting alternative to more hobbyists. This month, we’ll examine a relatively new entry – that of Blue Moon Aquatic’s ’90-watt’ LED fixture. These luminaires use a total of 90 LEDs generating ‘blue’ (employing 30 ‘blue’ LEDs, 1 watt each) and ‘white’ light (by using 60 ‘white’ LEDs, 1 watt each). Their website (www.bluemoonaquatics.com) advertises light intensity and spectral quality data, as well as other information. We’ll examine these claims using some rather sophisticated equipment and report the results. 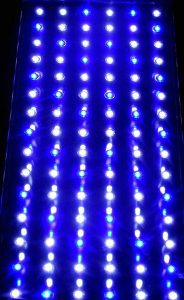 Figure 2. In this under-exposed photograph, the arrangement of the white and blue LEDs becomes apparent.

The 90-watt fixture is a compact unit. The LEDs are contained within a ferrous housing, and a clear lens (assumed to be acrylic) eliminates the possibility of water splashing directly on them.

Blue Moon Aquatics supplies stainless steel cable and carabiners for suspending the luminaire above the aquarium.

Light intensity (along with spectral quality) is an important consideration when purchasing a lighting fixture for a reef aquarium. Two light intensity metrics are in general use when reporting light intensity. The first – lux – is an internationally accepted measurement and it is generally the least expensive to measure as battery-powered meters with submersible sensors are available to hobbyists for less than $200 USD. As a point of reference, maximum sunlight at noon on a clear day is about 100,000 – 110,000 lux.

The other metric – Photosynthetically Active Radiation (PAR) – is preferred by botanists, phycologists, and coral researchers. It is reported in units of micro-Mol photons per square meter per second, or mol·m²·sec. Maximum PAR for sunlight is 2,000 – 2,200 mol·m²·sec. As a very general rule, corals thrive in environments where PAR values are 100 – 600 mol·m²·sec (the former value is the minimum light requirement, or Compensation Point for corals’ zooxanthellae; the latter is the maximum for shallow water corals, or the Saturation Point for photosynthesis). Some corals can tolerate higher light intensities but will use natural protective measures to protect themselves and their algae from excessive light (in a process called Dynamic Photoinhibition).

Both lux and PAR measurements were made according to the protocols listed in the ‘Testing Procedure’ section at the close of this article. 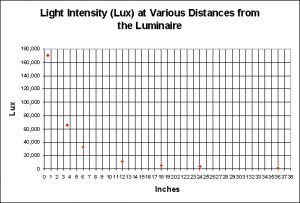 Figure 3. Light intensity (lux) as a function of distance.

Conversion of lux to PAR must consider the spectral qualities of the lamp; hence conversion factors vary between lamps with differing Kelvin ratings. 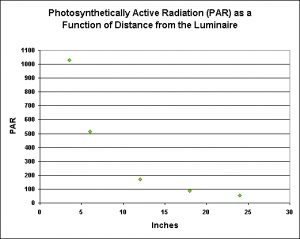 Figure 4. Photosynthetically Active Radiation (PAR, reported in units of molmÂ²sec) as a function of distance from the luminaire.

Figure 5. The Spectral Power Distribution (SPD) of the 90-watt luminaire.

Figure 6. Spectral components of the light generated by the white and blue LEDs.

Figure 7. The LEDs produce full spectrum light, although it is heavily weighted in the blue bandwidths.

The peak output of the LEDs is at 451.44nm – definitely in the blue portion of the spectrum.

Visualizations of light distribution patterns are important in order to determine proper luminaire placement. Figure 8 is a graph of 126 PAR measurements taken every 2 inches (~0.79 cm) on center. The luminaire was 3.5″ (~1.4 cm) above the PAR sensor. 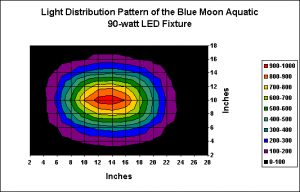 Since most green, yellow and orange wavelengths are poorly absorbed by photopigments contained with zooxanthellae, they are excluded in the light bandwidths called Photosynthetically Usable Radiation (PUR). Determining those wavelengths absorbed by corals’ symbiotic algae is difficult at best since Symbiodinium species (and their clades) can fine tune their pigment content to maximize the use of available light. However, we can arrive at a crude estimate of PUR by examining the absorption characteristics of major photopigments including chlorophyll a, chlorophyll c2, and peridinin.

Using this crude method, we can determine that approximately 76% of the light produced by the combination of blue and white LEDs is usable for photosynthesis. The other wavelengths (green, yellow and orange) are weakly absorbed by zooxanthellae photopigments, but their presence lends a ‘balanced’ appearance to the aquarium.

Without these wavelengths the aquarium would appear very blue or purple and the viewing experience would not (subjectively) be a pleasant one.

Ultraviolet Radiation (UVR) is a double-edged sword – if in high quantities, it can degrade the properties of lipids, proteins and other organic compounds. On the other hand, UV-A in small does is relatively harmless and in fact can be absorbed by some photopigments for use in photosynthetic processes.

Analyses of the light produced by the LEDs found a small quantity of UVR in the UV-A range. UV-A is the least destructive of the 3 major factions of UVR, and the amount seen is very low and practically harmless. See Figure 9. 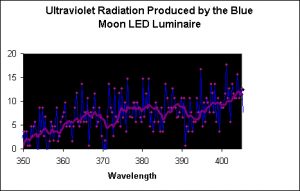 Figure 9. UV-A produced by the LEDs. The blue lines represent actual data points, while the violet line is a moving average of 10 measurements.

LEDs burn hot, but produce relatively little heat. Though this seems paradoxical, it is easily explained that the LED positive/negative junction is the place where heat is generated, and this area is very small. Small cooling fans are all that are required to keep the LEDs from overheating, and the Blue Moon 90-watt unit comes with three built-in cooling fans. These draw air from the top of the unit and push it downwards where the warmed air exits through side vents.

Infrared radiation is invisible to the human eye, although it can be measured with a spectrometer. An Ocean Optics USB2000 spectrometer was used to observe Infrared- A (or IR-A; 750-1,000nm). The result is shown in Figure 10. 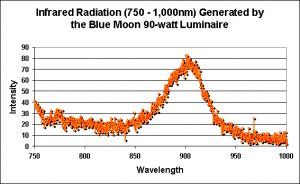 As we can see in Figure 10, the LEDs do produce some IR-A, however it is of little practical consequence. A more practical method is to examine the heat buildup of the luminaire when in service. See Figure 11 – it shows that the top of the luminaire (where we would expect the greatest heat buildup) rose no more than 1.8 degrees F (1°C) over the course of a 2-hour runtime. 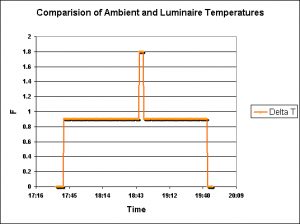 Figure 11. The difference (the ‘delta’) of luminaire and ambient temperatures during a 2-hour trial. Heat retention is practically non-existent.

One of the major selling points for using LEDs for aquaria illumination is that of low power consumption. The ’90-watt’ designation is right on the money – 93 watts was the highest power draw observed, and was as low as 91 watts. The additional power consumption is likely drawn by the fans and the internal transformer. See Figure 12. 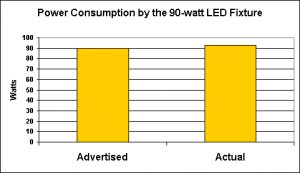 Figure 12. Power consumption is ‘as advertised’.

Blue Moon Aquatics advertises a life expectancy of 50,000 hours for their LEDs. If the daily photoperiod is 12 hours, we could expect the LEDs to last ~11.4 years.

The 90-watt Blue Moon Aquatics LED luminaire appears to be well made. It weighs about 10 pounds (~4.5 kg) which lends an impression of sturdiness.

Its relatively low price is attractive, but achieving this requires some tradeoffs. Some of the more expensive LEDs units on the market offer ‘bells and whistles’ including clocks, internal timers, cloud cover features and so on. The Blue Moon unit is straight-forward – it is meant to illuminate an aquarium with none of the pretty but unnecessary options. There is no internal timer but this is overcome with an inexpensive mechanical timer (~$5 bucks at the hardware store).

The LED array is less violet, bluer, and slightly redder than the actinic/daylight combination. In a nutshell, the LED is bluer and ever so slightly redder – the spectral quality will make objects appear slightly bluer. In other words, if you like the look of the actinic/daylight combination (1:1 ratio), you’ll probably like the output of Blue Moon’s LED array. We can also estimate the amount of PUR produced by both lighting options. The results are shown in Table 3.

The combination of blue and white LEDs wins the PUR race by a nose (5.8%). We should remember that fluorescent lamps (as well as metal halide lamps) lose their ability to generate blue light in a relatively short amount of time, whereas the LEDs should retain this ability for a much longer period.

The only reservation I have about this product is the cooling system. Although it cools adequately, there are concerns of salt spray entering the luminaire, especially since the fans ate located on top and blow air across the internal electronics. The manufacturer informs me that the circuit board is encapsulated with a corrosion-resistant material thus minimizing the potential ill effects of humidity and salt spray. However, I would suggest some sort of foam pre-filter for the air – something I will certainly do on my unit even if it keeps only gross particles from entering the luminaire.

Since the luminaire is constructed of some sort of ferrous material, I would recommend either waxing it with a quality car wax or carefully spraying it with a clear acrylic coating.

Light distribution patterns indicate each 90-watt luminaire (when its 16″ length is parallel to the long axis of the aquarium) is capable of illuminating approximately 2 feet (61 cm) of aquarium length.

Based on personal observations of corals’ minimum and maximum light requirements using a Pulse Amplitude Modulation (PAM) fluorometer, it appears that the Blue Moon Aquatic 90-watt LED unit is capable of meeting the maximum light requirements of the most demanding corals. We can also estimate that this fixture can supply the minimum amount of light to a depth of about 16-17 inches (41-43cm).

Photosynthetically Active Radiation (PAR) was measured with a LiCor Model 1400 data logger (Lincoln, Nebraska) equipped with a 2 cosine-corrected quantum sensor. The meter was calibrated appropriately for ‘air’ or ‘water’ measurements.

Lux measurements were made with a Gossen Multi-Pro lux meter.

Visualization of lamp spectral quality was achieved through use of a hand-held spectroscope marketed by Harvard-Smithsonian Center for Astrophysics, Cambridge, Massachusetts.

Power usage was monitored by a Kill-A-Watt meter manufactured by P3, International.

Blue Moon Aquatic advertises a MSRP for its 90-watt LED hood at $549 USD (~€406.58 at the time of this writing). Some quick checks of online vendors found prices below the MSRP.

The 90-watt luminaire I received comes with a 1-year warranty. An extended warranty for an additional year is available for $99 USD.

This company also offers other products, including 300-watt and 600-watt luminaires as well as smaller pendant fixtures.

Please leave them in the ‘Comments’ section below.