Aquarium Fish: Animals That Associate With Anemones (other than Clownfishes)

My last article covered the relationships between clownfishes (anemonefishes) and their host anemones, as well as the substitute hosts that these fishes will often take up residence in when no suitable anemone is available. This month I want to continue on the subject of fishes living with anemones, but not the same fishes. Surprisingly, there are at least fifty such species of non-clownfishes that associate with anemones, some of which are regularly offered in the hobby.1,2,3 I’ll also cover a good number of crustaceans that live with anemones, many of which are also available to us. Maybe you’ll decide to try one or more of these pairings in an aquarium. 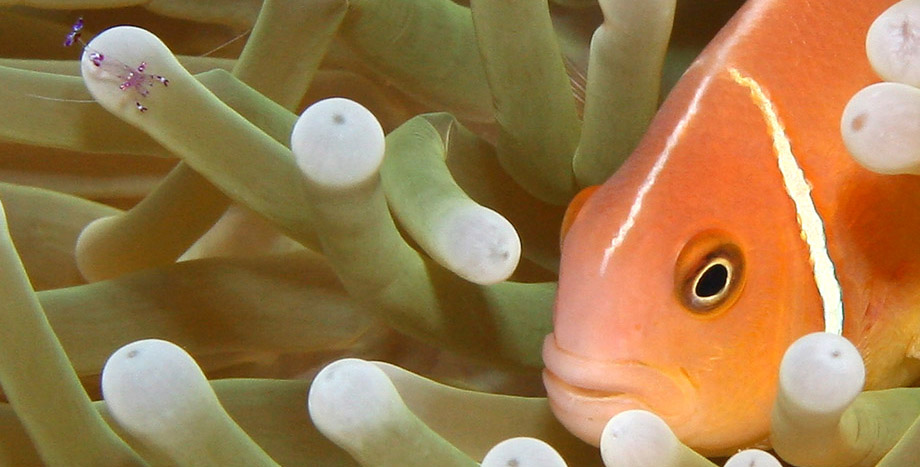 A search of the literature turned up numerous papers discussing non-clownfishes living with anemones. Far more than I expected, actually. However, while clownfishes are obligate symbionts that are never found living away from an anemone in the wild except when very young, these non-clownfishes are faculative symbionts. This means that they may live with an anemone, and doing so may increase their chances of survival and reproductive success, but they do not have to.

Unlike clownfishes, many of them also associate with anemones only when young. And, most are also different from clownfishes in that they live amongst (or just near) the stinging tentacles of their host anemone but do not intentionally come into contact with them. For example, one study found that of seven covered species of fishes that occasionally lived near/amongst the tentacles of anemones, only one made full contact with the tentacles, while the others did not.3 Another study found that some species were not immune to the stings of the anemones they associated with and that many had white spots and lesions on their bodies, which were assumed to be the result of accidental contacts with the tentacles.5

So, what we seem to have here are a number of species that have some means of protection from stings, and others that do not. As is the case with clownfishes, it is thought that those species that can come into contact with the tentacles are protected by their mucus slime coat, which either contains chemicals that inhibit the discharge of an anemone’s nematocysts (stinging cells), or simply lacks any chemicals that would stimulate their discharge.2,4 The details are apparently unknown at this time, though. On the other hand, those that do get stung on occasion are thought to be accepting of an occasional sting in return for the protection from predation that an anemone’s tentacles can provide.2 Please see my previous article for more on this.

With that covered, I’ll give you a number of examples that I was able to find:

The common domino damselfish (Dascyllus trimaculatus) is frequently found living amongst the tentacles of various anemones and can come into full contact with them. It has been reported to associate with the Ritteri anemone (Hetractis magnifica), the sebae anemone (H. crispa), the sand/beaded anemone (H. aurora), Merten’s anemone (Stichodactyla mertensii), the carpet anemone (S. haddoni), the long-tentacle anemone (Macrodactyla doreensis), and the pizza anemone (Cryptodendrum adhaesivum).6,7,8 Despite this, I can’t say I’ve ever known of anyone that intentionally added these damsels to an aquarium housing a suitable anemone, just to do something different.

Like clownfishes, the domino damselfish can come into full contact with the tentacles of several anemones, and is frequently seen living in them in the wild. Typically they share an anemone with clownfishes.

The condy anemone (L) and the curley-cue anemone (R) are commonly-offered species that do not host clownfishes, but several other fishes and some crustaceans may associate with them.

Anyway, the similar white-spotted damselfish (Dascyllus albisella) and Strasburg’s damselfish (D. strasburgi) also associate with various anemones at times and can come into full contact with their tentacles, including the Ritteri anemone, a Hell’s fire/night anemone (Phyllodiscus semoni), and a mud anemone (Marcanthia cookei).6,7,9

The sawcheek cardinalfish (Apogon quadrisquamatus) and the bridle cardinalfish (A. aurolineatus) occasionally associate with the curley-cue anemone (Bartholomea annulata) and the condy anemone (Condylactis gigantea). However, it is not clear if they are able to make full contact with the tentacles. While some seem to make occasional contact with them, others seem to only hover near them.2,5

Several fishes and crustaceans may also associate with Hell’s fire anemones (L) and tube anemones (R), while clownfishes do not.

Likewise, the lunare wrasse (Thalassoma lunare) has also been reported to associate with the Ritteri anemone and is often touched by its tentacles, as does the checkerboard wrasse (Halichoeres hortulanus).2

Then, there are the butterflyfishes. Several species of butterflyfishes feed on anemones and thus must have some means to deal with stings, and juvenile sunburst butterflyfish (Chaetodon kleinii) are frequently seen moving amongst their tentacles.6,11,12 I have never personally witnessed one touching the tentacles though, and can’t find any reports of them doing so. Unfortunately, I also had no luck finding any information about all species of anemones they do/don’t associate with.

Juvenile sunburst butterflyfish are often seen associating with anemones, such as the Ritteri anemone (L) and Merten’s anemone (R).

Regardless, here’s something quite unusual that I came across by accident. It’s a story about a personifer angelfish (Chaetodontoplus meredithi), associating with the carpet anemone Stichodactyla haddoni and touching its normally sticky (and very deadly) tentacles after a period of acclimation.13 The fish eventually began to move back and forth between two of these anemones in the same aquarium, and even shared them with clownfish. (insert URL: http://reefbuilders.com/2012/07/09/clownfish-anemone-angelfish/)

There are quite a few crabs, shrimps, and other crustaceans that also associate with anemones. Apparently some, if not all, must go through an acclimation procedure to do so, as their exoskeleton does not prevent them from being stung, or grabbed by anemones like “sticky” carpets. In fact, one experimental study found that some shrimps that normally associate with anemones lose their protection from being stung after a period of isolation from their hosts.14

In order to acclimate themselves to their host, it has been suggested that these crustaceans either actively produce some form of chemical camouflage that prevents anemones from stinging them after initial contact, or acquire such camouflage by transferring mucus from their hosts to their bodies. Regardless of how it’s done, many can come into full contact with their host’s tentacles after making brief contacts with it, such as picking at the tips of the tentacles.14,15

Anyway, the spotted porcelain/anemone crabs Neopetrolisthes maculata and N. ohshimai typically live in pairs that associate with a wide range of anemones, including the carpet anemone, Merten’s anemone, the Ritteri anemone, the long-tentacle anemone, the bubble-tip anemone, the pizza anemone, and Hell’s fire anemones.7,8,12 Both species come into full contact with their host’s tentacles, and can even walk across carpet anemones.

The attractive spotted porcelain/anemone crabs Neopetrolisthes ohshimai (L) and N. maculata (R) can inhabit several common-offered anemones, and are quite interesting to watch.

The mithrax crabs Mithraculus forceps and Mithrax cinctimanus, and another unidentified species ofMithrax have been reported to associate with the condy anemone and come into contact with its tentacles, although they were typically found at the anemone’s base, under the tentacles.7,16 Mithrax cinctimanus associates with the sun anemone (Stichodactyla helianthus), a well.7

The arrow/spider crab Stenorhynchus seticornis has also been reported to associate with the condy anemone, and again, can make contact with its tentacles.16 Likewise, the arrow crab Stenorhynchus lanceolatus has been reported to associate with the club-tipped anemone (Telmatactis cricoides).17 I also came across a photograph of an unidentified arrow crab associating with a tube anemone.7

Some mithrax crabs (L) and the arrow/spider crabs (R) may associate with anemones at times, and can touch their tentacles.

The sexy shrimp (L) is well-known for associating with various anemones, as are numerous species of shrimp in the genus Periclemenes (R).

An unidentified pistol shrimp (Alpheus sp.) has been reported to associate with the corkcrew anemone, typically as a pair that lives at its base.7,8 And, the pistol shrimp Alpheus armatus has been reported to associate with an unidentified aiptasiid anemone, although in this case the only observed contact was between the shrimp’s antennae and the anemone’s tentacles.16

The sexy shrimp (Thor amboinensis) gets around, as it associates with the giant carpet anemone (Stichodactyla gigantea), the flower/beaded anemone (Epicystis (Phymanthus) crucifer), the sun anemone, the curley-cue anemone, the knobby anemone, the condy anemone, and the club-tipped anemone.7,8,17 Other unidentified members of the genus Thor also associate with the curley-cue and knobby anemones, as well as two antler/branch anemones (Heterodactyla hemprichii and Lebrunia danae) and a Hell’s fire anemone (Actinodendron sp.).8

The peppermint shrimps Lysmata ankeri and L. seticaudata, the skunk cleaner shrimp (Lysmata grabhami), and the golden coral shrimp (Stenopus spinosus) have all been reported to associate with the club-tipped anemone.16,17

And lastly, we get to the true anemone shrimps, which belong to the genus Periclimenes. All of these can make full contact with their host’s tentacles, although some of these are apparently specialists that associate with only one anemone, while others are more generalists that can associate with several species. These shrimps are also cleaners that will nip and pick tiny parasites, dead skin, scales, mucus, and such off fishes without getting eaten. Also note that while these shrimps generally do no harm to their hosts, in the absence of food some have been reported to feed on their host’s tentacles.8,14,18

One of the most commonly-seen anemone shrimps is Pereclimenes yucatanicus, seen here in the tentacles of condy anemones.

And that’s all I’ve got. Again, for an aquarist looking for something interesting and different, there are lots of combinations presented here, many of which are available to us. So, keep these in mind if you think you might be interested in keeping anemones and some of the non-clownfishes and crustaceans that associate with them.