Family Scorpaenidae or the scorpionfishes are well known for their weird looking shape with the venomous spine to protect themselves from predators. But there was one scorpionfish that does not look “weird” or “spiny” as are the other members of the family. And yes, I am talking about the Leaf Scorpionfish (Taenianotus triacanthus).

The Leaf Scorpionfish is of Monotypic Genus, consisting of only one species, widely distributed in Indo-Pacific Region. It could be found from East Africa to Galapagos Island, as north as southern Japan to French – Polynesia and as south as Australia. They are found in pairs, but sometimes also observed singly or in a small group at depths from 1-134 meters. They are also known as Paper fish, Leaf fish, or flat Scorpionfish, due to their deep compressed body.

In the aquarium, these fish demonstrate similar behavior as in nature. They do not hide secretly in a dark place waiting for the prey to pass by and quickly dash toward the prey before sucking them into their stomach like other scorpions, but instead they perch on a well chosen position. It might be underneath the coral or some rockwork where the water current flows swiftly, even though in front of the tank or a bright area. The leaf scorpion use their “unique” sitting action, and bend their head lower than tail, move themselves side to side as if imitating a leaf moving by the water current. By this way, the prey will think that they were only a leaf and when the prey came to a place close enough, they will gasp the prey and eat it immediately. 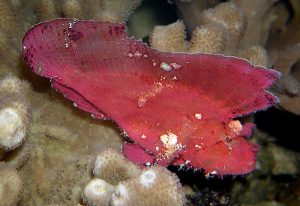 I was attracted to the shape of this fish since I firstly saw them in a book and fell in love with their action at first sight. They don’t look too weird, but still, don’t look like normal fish. To me, it is more like a piece of a leaf or a trash than a fish. It appears in various colors: pink, white, marble, orange, and etc. I’ve been keeping three of the yellow phrase in one tank and they are doing well. A few months later, I got two 3” bright pink specimens imported from the Philippines. My friend asked one from me. I put the only one left in my invert tank together with corals and many smaller fish (which were not very small).

There I kept him with smaller, but faster fish like Adorn wrasse (Cirrhilabrus adornatus), Bicolor Anthias (Pseudanthias bicolor), Flame Hawkfish (Neocirrhites armatus), and the dwarf scorpion like the yellow spotted scorpionfish (Sebastapistes cyanostigma. All the fish were similar in size or a bit bigger. The leaf scorpionfish seems to show no interest in a bigger size prey. They do take time before pursuing their food, apparently checking to see that it could fit in its mouth. 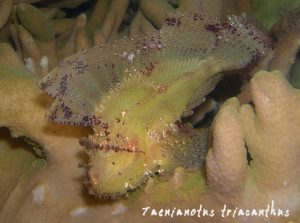 The pink leaf scorpionfish was doing well for about two weeks in my tank, then it started to have a problem. In one evening, I noticed that its color was fading. But I think that it was only a small color change which might happen from stress or the changing of the environment. However, on the next day it was still fading, and turned completely yellow on the third day. I don’t know that this phenomenon could happen to all the colorful leaf fish in captivity, but the pink one that my friend got at the same time did not change its color like mine.

This leaf-like creature is not a finicky eater. They might require a living food such as mollies, guppies, or a small shrimp at first. But as they do acclimatize, they can be switched to a piece of cut seafood frozen or otherwise. Be careful when feeding these fish, try to place the prey in front of them so that it could easily be seen and do not overfeed them. Don’t feed them large amounts, keeping i 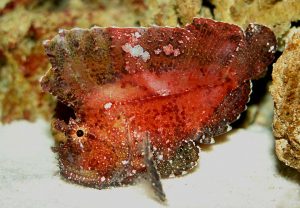 n mind that they do not need the amount of food as in nature.

Like few soft-skin scorpionfish such as the Rhinopias sp., the leaf scorpionfish also shade their skin cuticle like molting once or twice a month. Before that the fish will show less interest in food, but it will turn back to its normal habits and the color will be stronger after its shading. The soft water current will help them to release their molt easier. The slimy molt will be appeared in transparent form, floating in the tank or sticking to something in the tank and should be taken out if seen.

It is a reef safe fish that can be kept in reef tank with no harm to corals. But it is a threat to mobile inverts like shrimps and crabs, including much smaller fishes. It is best kept in peaceful community tank or a small reef tank that does not contains aggressive or picky fishes like triggers and Butterflyfish. Good tank mates are lionfish, squirrelfish, etc. Beware that these fish get to eat enough if housed with more aggressive mates. They do attain to the maximum size of 10 cm. in captivity, but they could grow as big as 13 cm. in the wild. Anyway, their size is not too big for a home aquarium and it’s definitely a great display animal. 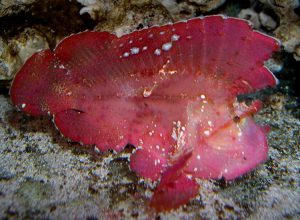 Note! Beware! It also has venomous spines like the scorpions do, so handle them with care!