I’ve always admired the Harlequin Tuskfish ( Choerodon fasciatus ) and have frequently been asked if it’s an appropriate addition to a reef aquarium. Always up for an experiment, I recently purchased a juvenile tusk and put it in my 500 gallon reef aquarium. Now I didn’t do this with complete blinders on. I researched the habits and habitat of this fish first, and I’ll share that with you in this article. I also recommended this fish to fellow aquarist Terry Siegel and know that his has been thriving in his reef aquarium for many years.

The Harlequin Tuskfish is part of the large family of wrasses, Labridae. It belongs to the genus Choerodon, but older references may still have it listed as Lienardella fasciatus, which is incorrect. The genus Choerodon contains 25 species, but most get too large or simply aren’t attractive enough to collect for the aquarium trade. Similar to all Choerodons, the Harlequin Tusk is characterized by its four protruding teeth that are used to grasp and tear into hard prey, such as crustaceans. The unique coloration of the Harlequin Tuskfish (red/orange stripes on a white/blue body) make it unmistakable for any other fish. The juvenile coloration is similar to the adult except for the ocelli (false eye spots) that appear on the dorsal and anal fins. These “protective” spots disappear as the fish matures. Adults are also more deeply colored than juvenile specimens. This is a fish that truly becomes more beautiful with age. There are regional
differences in coloration as well, but it’s rather subtle. Australian specimens tend to have more intense and redder coloration in the ventral and anal fins than those originating from Indonesia and the Philippines. Maximum adult size for the Harlequin Tusk is listed as 8 to 12 inches, depending upon the source of this information. Typical aquarium specimens are 5 to 7 inches in length. 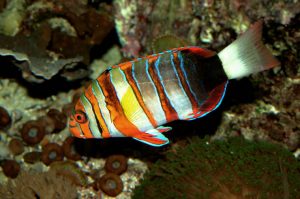 Terry Siegel’s tusk, mentioned in the text, and photographed by Terry Siegel

The Harlequin Tuskfish has a fairly widespread distribution in the Western Pacific and can be found from Southern Japan to Australia. Specimens collected for the aquarium trade typically come from the Philippines, Indonesia, and Australia. Adult tusks are generally found as single specimens patrolling areas of sand and coral rubble in shallow coastal reefs, but they can occur in small loose groups in the vicinity of caves and overhangs on reef slopes. Juveniles are usually solitary and secretive and can be seen along reef walls. Their diet includes most hard-shelled benthic invertebrates, small crabs, shrimp and fish.

Unlike many wrasses, the Harlequin Tuskfish is not sexually dichromatic or dimorphic. In other words, you can’t easily distinguish males from females based upon external characteristics. It’s best to purchase and maintain single specimens in the aquarium.

The Harlequin Tuskfish is a hardy and undemanding fish in captivity. After an initial period of acclimation, they become quite bold, but never stray too far from the protection of the reef. These are long-lived fish that grow quickly in captivity, so the minimum recommended aquarium is at least 36 inches in length and 60 gallons in volume. Bigger is definitely better! The Harlequin Tusk makes a great addition to the fish-only marine aquarium or a full-blown reef aquarium. They generally ignore sessile invertebrates, but large specimens are capable of eating small fish, shrimp and crabs. They usually ignore resident shrimp and small fish, but may misinterpret new additions to the aquarium as food. It’s best to add any new bite-sized fish or shrimp after the lights have gone out. This is good advice when adding any new specimens to an existing community of fish. It gives the newcomer a chance to gain its bearings and find a hiding place before having to deal with potential aggression
from tankmates.

Unlike many wrasses, tuskfish don’t bury in the sand at night, so a substrate is optional in a tuskfish aquarium. I prefer a sandy substrate though because it encourages the production of many small life forms, such as gammarid shrimp and polychaete worms, which provide a secondary food source for the tuskfish to graze on throughout the day. A reef built out of live rock makes a great background for a tuskfish. They need the comfort of being able to dash into the rockwork if they get spooked and to sleep at night. Live rock should be arranged to form caves and overhangs, which will give the tuskfish a sense of security. Some areas of reef rubble can also be included in the setup. This will give the tuskfish a place to explore for food items and serve as a breeding ground for many small shrimp and worms that reproduce in marine aquariums.

Harlequin Tuskfish have no special requirements as far as water quality and lighting, but like most reef fish, they do best at natural reef parameters. Specific gravity between 1.023 and 1.025 at a temperature between 78 and 82 degrees Fahrenheit will suit the tuskfish fine.

Although the Harlequin Tuskfish is an indiscriminate eater, its diet should consist primarily of meaty seafood. This is important for maintaining the health and vivid coloration of the tusk. Chopped krill is particularly good because it contains natural color enhancers. In addition, chopped shrimp, squid, and non-oily fish can be part of a well-rounded diet. 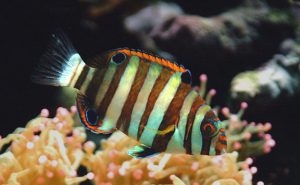 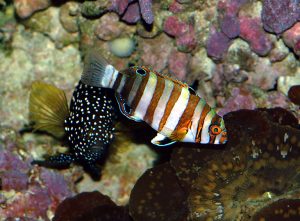 The two shots of the juvenile are of the author’s tusk, photographed by the author.

Despite its ferocious appearance, the Harlequin Tuskfish is relatively mild- mannered. They normally ignore tankmates, but may be harassed by larger wrasses, angelfish and triggerfish. I suggest adding the tuskfish first, if your goal is to maintain an aquarium of larger, aggressive fish. In the usual reef aquarium, the Harlequin Tusk makes a good tankmate for tangs, surgeonfish and other wrasses. In my reef aquarium, my Harlequin tuskfish is actually bullied by smaller Pomacentrus and Chryspitera species damsels, as well as two large clownfish ( Amphiprion melanopus & Premnas biaculeatus ). It ignores smaller Pseudochromids, wrasses and larger motile invertebrates.

When shopping for a Harlequin Tuskfish, make sure it has clear clean fins and is actively moving about the aquarium in search of food. Be sure to see it eat! A Harlequin Tusk always has room for one more bite of food! Specimens between three and five inches are the ideal size. Tusks less than two-inches in length are fragile. They have a high metabolism and insufficient reserves of fat to withstand a period of prolonged starvation. Tusks larger than five inches don’t ship as well and often have a harder time acclimating to captivity. I also recommend spending the extra money and purchasing Harlequin Tuskfish that originate from Australia. It may have something to do with the way they’re captured, shipped or handled, but Australian Tuskfish have exhibited better survivability than specimens originating from Indonesia and the Philippines, especially the smaller tusks!

As with any new fish, it’s best to quarantine them become introducing them into a display aquarium. This give the fish a chance to acclimate to captivity, become used to your food and feeding regimen, build up reserves, and be treated for disease if necessary.