Aquarium Invertebrates: A Creature From Outer Space Or A Hydroid For Liberace’s Piano?

A few months back (February, 2003) I was in Atlanta Georgia with Two Little Fishies, Inc. exhibiting our products at the American Pet Products Manufacturers Association’s annual trade show. Before the trip I was speaking to Bruce Carlson via e-mail, and he recommended that I make time to visit the Lovett School when I was in town. He gave me the contact information for Dan Dalke, who runs the science program there. Dan’s high school marine biology students have an aquaculture program that includes a lab with several coral culture aquariums. As Bruce put it, “The instructor obviously realizes the importance of these aquarium systems in helping students understand how coral reef ecosystems work,” and this was “a heavily endowed school with very ‘enlightened’ and enthusiastic students — the kind you wish every school had.” I planned to make time for a visit. 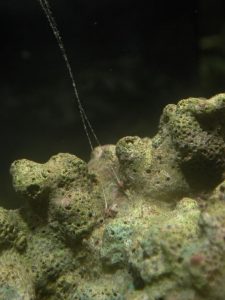 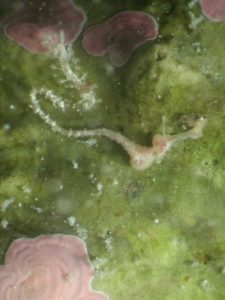 I spent the majority of the time in Atlanta at the trade show in our Two Little Fishies booth, but I had also planned to give an evening lecture at a terrific local shop called The Fish Store and More, and there was time to fit in a quick stop by the Lovett School in the late afternoon on my way to the lecture.

Dan Dalke gave me a tour of his lab and introduced me to a few of his students, who stayed after school to meet me. Unfortunately some other students were unable to stay. When they were showing me some of their tank experiments, Dan pointed out a puzzling problem they had noticed. The mushroom anemones ( Discosoma sp_._ ) that had previously thrived in one exhibit were dying back for some reason. As I was looking at the different tanks I had been noticing what I at first thought were a large number of a sessile Ctenophore in the genus Coeloplana, which have highly contractile fine hair-like tentacles. I was watching one more closely now as Dan asked the question about the Discosoma die-off. In an instant I realized that the culprit was these “things” proliferating over the rocks in his system, and they weren’t Coeloplana at all. They had bottle-brush tips to their contractile worm-like bodies, and these bottle-brush tips reminded me of the polyps of some types of hydroids. They had to be stinging the mushroom anemones. Seldom am I at a loss for a name for an invertebrate in a reef aquarium, but here I was calling these things, “things” and I was beginning to sound like Steve Martin on Saturday Night Live saying over and over “What the Hell is THAT!?” I asked Dan if he had a dissecting scope so we could have a closer look at them, and the students gathered some snail shells and small rocks with several examples of these creatures. They were literally all over the place in the tanks.

While the dissecting scope was being set up, I shot a few images of the creatures on rocks in the tanks. They have an extremely elongate and contractile body that assures at least part of them will be out of focus due to the depth of field required to capture the whole creature in the image. This fact combined with their constant expanding and contracting in the currents, and hair-thin light colored bodies makes them very tricky to photograph. When we were able to isolate a single creature under the scope, I used my Nikon Coolpix to photograph it. The Coolpix lens fits closely on the eyepiece of most microscopes, and with some practice, proper lighting, and a steady hand one can take good images of objects in the field of view.

When I got home I forwarded images to several colleagues who specialize in cnidaria, including Daphne Fautin at the University of Kansas. I got a reply from Marymegan Daly, at the Dept. of Ecology and Evolutionary Biology at the University of Kansas, who told me of a discussion on the cnidaria listserve that had been occurring simultaneously with my inquiry into the mystery creature. The archive of this discussion, including images, can be seen at: http://maillists.uci.edu/mailman/public/cnidaria/

Look under the subject headings for February and March, regarding Myriothela (in February) and Candelabrum (in March).

The mystery hydrozoan now appeared to have a name, a genus at least, as the photographs showed that the newly described Candelabrum fritchmanii were quite like the creature in the aquariums at the Lovett School. So, Candelabrum it is. The name reminds me of a particular episode of Bugs Bunny cartoon I must have seen a hundred times as a kid. In the cartoon Bugs does a Liberace impression, telling his foil, slowly, to “Bring the Candelabrum to muh-ther, … George.” The Candelabrum of course had been loaded with dynamite and you can imagine what happened next.

This Candelabrum sp. hydroid holds no candles per se, but it is a little firecracker! It has capitate tentacles that pack a powerful sting, and it uses them to snare small crustaceans such as copepods and amphipods. It also can catch brine shrimp or flake-food particles. The prey is captured both from the water column and from the adjacent rocky substrate as the polyp often extends out into and onto them. The powerful nematocysts are used not only for food capture but also for defense. This was manifest in the disappearing mushroom anemones. Considering its ability to proliferate in an aquarium and its stinging capacity, this creature qualifies as a new pest to be avoided, among the ranks of Aiptasia or Anemonia manjano anemones, or the zooxanthellate hydroid Myrionema (Sprung, 2001). However, this creature is so fascinating to observe and obviously easy to keep that I have to add it would make a great display on its own in a small aquarium.

Description of the genus Candelabrum, from Hewitt and Goddard

In addition to the aforementioned asexual reproduction methods, Candelabrum spp. exhibit the following sexual reproduction characteristics. Larvae develop into actinulae in the female gonophores, with one or more larvae per gonophore. Feeding tentacles with claspers attached to gonophores with developing eggs in some species. Actinulae of Candelabrum fritchmanii released in a laboratory aquarium were about 1mm long and had approximately 20 primary tentacles each of up to 1mm in length. They grew to 2mm in length in four days, and 10mm long in two weeks, and the posterior end developed into a root-like structure (Hewitt and Goddard, 2001).

There are approximately 15 species described in the genus Candelabrum, although five of them may be synonyms, leaving 10 known species. None are strictly tropical, though one, C. australe, occurs in New South Wales Australia, a region where both tropical and temperate species of all kinds of marinelife can be found living together. Hewitt and Goddard, 2001, furthermore discusses aspects of the taxonomy of the family Candelabridae and the genus Candelabrum, which was once known as Myriothela. The description of the systematics by Hewitt and Goddard includes emendations to the family, subfamily, and genus descriptions, to accommodate the fact that the newly described species Candelabrum fritchmanii occurs in a colonial form of multiple polyps in addition to solitary polyps. It is of particular importance to note that the species at the Lovett school also appears to occur in solitary and multiple polyp forms, thus the character observed to
be unique for C. fritchmanii may not be. It is possible that having the opportunity to culture Candelabrum spp. in aquariums may afford greater opportunity to observe their complete range of form. It may turn out that many or all species in the genus have the ability to form multiple polyps, and the absence of this characteristic in the literature describing them merely represents the limitations of descriptions based on the harvest of a few specimens. Stepanjants et al. (2002) showed species of Monocoryne, the other genus of hydroid in the family Candelabridae, exhibit immature polyps in aggregations attached to the adult polyp at the pedal disc, and they easily break apart from their point of attachment, indicating a form of asexual reproduction quite like the budding observed in anemones. Hewitt and Goddard, 2001 also speculate that the linked polyps may represent a form of asexual reproduction. When I observed the numbers of polyps at the Lovett
School I had the impression that they were reproducing asexually by longitudinal fission, something like the method of reproduction in colonies of the soft coral genus Xenia. This idea is supported by Hewitt and Goddard’s observation of one specimen split into two sections halfway up the distal region that bears the tentacles.

Taxonomic position of the Family Candelabridae

There are 2 genera within the Family Candelabridae:

Based on the brief descriptions of the different Candelabrum species, it appears likely that the one at the Lovett school is undescribed. It may also be a first known strictly tropical species, or it may give a range extension for an already known species. It is unfortunately impossible to say for sure where it comes from, as it was introduced to the system at the Lovett School from a separate reef aquarium. I’ll pursue the matter of describing this Candelabrum sp. with researchers who specialize in this group.

Special thanks to Bruce Carlson, Dan Dalke and his class, Daphne Fautin, Marymegan Daly, and the staff at The Fish Store and More, who carefully packed a specimen of Candelabrum for me, among other aquatic goodies.