Beta Glucan As A Biological Defense Modulator: Helping Fish To Help Themselves

Have you ever watched helplessly while a favorite fish battled an illness and you didn’t know what to do? Identifying fish disease is difficult, especially for hobbyists. Many of the most common symptoms that fish exhibit when ailing are shared by a multitude of possible causes. Unless a correct diagnosis (or educated guess) is made the odds of a happy ending are not in your “wet pet’s” favor. Most hobbyists are forced to make a “best guess” as to what is causing the problem and how to counteract it. A water change is usually a good first step, but is there anything more that can be done without first becoming a fish disease expert? 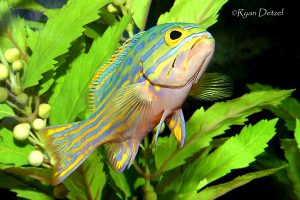 A Polleni Grouper ( Epholopholis polleni ): a rare and beautiful species, but one that may still derive the same health benefits from Beta Glucan as other species.

Wouldn’t it be great if there were one thing that we could give any sick fish that could help it? Aquarists dream of a “magic bullet” that could be used as a treatment for a plethora of problems. Ideally this “magic bullet” would be helpful regardless of whether the infecting agent is bacterial, viral, fungal, or parasitic. It would even help fish to recover from stress, abnormal growths, and exposure to toxins such as ammonia. Let’s not forget that our magic bullet would have to be safe for fish, easy to administer and have no known side effects. It could even be used in conjunction with any medication.

We all know that finding such a magic bullet is just a pipe dream, sort of like searching for the “Holy Grail”, right? Does anything like this actually exist that can be used with animals? I know that this will come as a surprise, pleasant as it may be, and it sounds so fantastic that it may be hard to accept, but something on this order is available! I wouldn’t say that it is a “cure all”, but it is useful against pathogens and other threats to fish health management. Evidence for its effectiveness is abundant. A significant number of studies have been published in scientific journals that can be used as references. These reports comprise of trials in human and veterinary medicine, as well as studies performed on fish and invertebrates.

Beta 1,3 glucan is the chemical name for a molecule that comes from the cell wall of Baker’s yeast. This natural substance is extracted from Baker’s yeast or Saccharomyce cerevisiae by stripping away layers of carbohydrates, proteins and other materials that make up a yeast cell.

It is categorized by the Food and Drug Administration as “Generally Recognized As Safe” or GRAS and it is non toxic to fish with no known side effects. Beta glucan is safe to use in conjunction with herbal remedies (i.e. garlic) or pharmacological drugs. It has also proven to enhance the effects of vaccines and antibiotics.

How Does It Work?

Macrophages are a type of white blood cells that are found in most tissues and organs of the body. They play a central role in the defense of all multi- cellular animals against invading pathogens. Beta glucan is strongly stimulatory to macrophages (Seljelid et al., 1984). These white bloods cells, in turn, set in motion a cascade of other immune system activities. Macrophages circulate the body in search of foreign invaders (antigens).When they find a foreign invader they then engulf them through a process known as phagocytosis. They degrade the invader into peptides that are used to communicate the presence of foreign bodies to B-cells and T-Cells in the immune system. These cells are a part of the acquired immune system that learns to adapt and defend the body against specific threats. Simplified, acquired immunity is how the body becomes more resistant or immune to certain pathogens after exposure.

Non-specific defense mechanisms of the immune system are vitally important in protecting fish (Secombs and Fletcher, 1992). Beta 1, 3 D glucan is a non- specific immune system stimulant, meaning that it activates the immune system to respond in a general way rather than against a specific type of pathogen or invader. This makes it a valuable tool against bacterial, viral, fungal and even parasitic pathogens, but it is not limited to these. 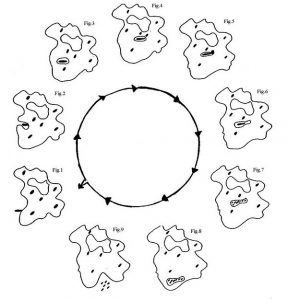 Beta glucan works as a biological defense modifier. It activates the immune system by stimulating receptors on macrophages that cause them to react as if a fungus is attacking the body. Biochemical studies have identified this receptor on fish macrophages and netrophils (Engstad and Robertsen 1993; Ainsworth 1994; Engstad and Robertsen 1994). Administering beta glucan begins a chain reaction of events which heighten cellular immune response. It stimulates the production of white blood cells such as macrophages, neutrophils and monocytes that combat invading pathogens. Cellular mobilization is increased helping immune system cells to recognize antigens and move to where they are needed most. The immune system’s capacity to engulf non-self cells is augmented and the productions of anti-microbial agents are increased.

Beta glucan has shown promise in trials against viral, fungal, parasitic and bacterial infection. It has proven in numerous scientific studies to be an immodulating agent that can enhance the major host defense mechanisms of the immune system. It is safe to use with any drug or chemical and it works synergistically with all current modes of therapy.

It has long been known that antibiotic treatment brings with it the risk of creating mutant or resistant strains of bacteria. Beta glucan could avoid this problem and is especially helpful when used in conjunction with antibiotics.

Pretreatment with Beta glucan means that the host can activate and proliferate defense mechanisms at a faster rate than invading organisms. This will give the animals a head start against pathogens. Fish that have been exposed to an ill tank mate should be given beta glucan to prevent the spread of contagious disease.

When Should It Be Used?

Stimulating immune function prior to attack can prove to be especially effective against facultative pathogens. This would include infections such as those caused by Vibrio anguillarum, Flexibacter columnaris, Trichodina spp. and fungal infections such as Saprolegnia spp. Beta glucan may also help fish combat obligate pathogens such as the parasite Cryptocaryon irritans and viral diseases such as Lymphocystis.

Beta 1-3D glucan can be administered to newly acquired specimens during the quarantine period. Fish that have recently been netted, transferred or otherwise handled are stressed. Stress inhibits immune function. Beta glucan helps to alleviate the effects of stress and it can prevent illness. It helps wounds to heal more quickly. Beta glucan is useful for helping fish recover from exposure to toxins in the water. Beta glucan has also shown to give positive results against tumors, or abnormal growths.

Beta glucan has proven useful in mice suffering from lymphocytic leukemia that were infected with Staphyloccal Aureus or “Staph” simultaneously. This suggests that it may be employed in immuno-compromised animals to avert infectious and/or neoplastic disease (abnormal growths).

Animals that are obviously sick should also be fed beta glucan. Do not forgo all other treatments for fish diseases or disorders in favor of beta glucan. It is especially helpful when used in conjunction with other therapies such as antibiotics.

Beta glucan has applications for spawning and rearing fish. Immersing free- floating larvae (embryos) and juveniles of marine fish with beta glucan will make them more resistant to infection and improve growth rates. 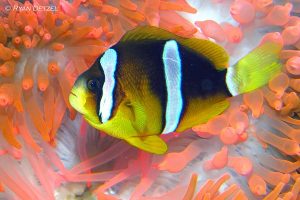 Beta glucan has been shown to transfer to the blood circulation of Atlantic Salmon after oral administration (Svein Bjornsson et al, 1991). This means that it can be given to fish by adding it to food in small quantities. If you make your own fish foods then mix some beta glucan into the gelatin that holds it together and then freeze it. Bioencapsulation is another effective means of getting beta glucan into fish as a dietary supplement. This can be accomplished by adding beta glucan to saltwater that contains live adult brine shrimp several hours before feeding the shrimp to fish. Brine shrimp are filter feeders so they will ingest beta glucan and then you can feed the enriched (gut loaded) live food to your fish. You can also simply sprinkle a small portion on the food just prior to feeding.

It is important to note that studies indicate that the most effective form of Beta 1,3-D glucan is extracted from Baker’s yeast or saccharomyce cerevisiae. The diet should also be supplemented with vitamins and highly unsaturated fatty acids. These nutrients may enhance the capacity of immune system cells that are stimulated by the use of beta glucan.

Since there are no known side effects and it is not a drug giving the fish an exact dose is not critical. The dose of 0.02% a day of body weight has been suggested. However, safety evaluations indicate that beta glucan can be used over a wide dose range. Studies with animals suggest that the optimal oral dosage of beta glucan is in the range of 0.4-1.5 grams per 100 kilograms of body weight per day. Feeding a larger portion probably will not improve the results, can be expensive and is not intended as a replacement or reduction in the amount of food normally offered.

Where To Get It

Beta glucan can be found (albeit may take some persistence) at some local health food stores. It is available from Source Naturals among others. I suggest using the 7.5mg capsules because they are a more pure form of B-1, 3 glucan. Open the capsules and add a small portion in the food. You can find out more on their website at www.sourcenaturals.com. There are many other product and information sources available on the Internet.

Foods and additives containing beta glucan are also packaged for the aquarium industry. One of these products is Carasius Immun™. It can be found at http://www.dajanapet.cz/carasius_immun_A.html. Several Ocean Nutrition products list beta glucan among the ingredients. Marc Weiss brand products has an additive called Marine-Fish Vital™ that contains beta glucan.

(The products mentioned above serve only as examples and are not intended as endorsements.)

Notable Studies Of The Effects Of Beta Glucan:

Beta-1, 3-glucan is effective in all mammals as it is in fish and birds with its immunoenhancing properties established in a number of fish species. It has applications for prophylactic and therapeutic use. Beta glucan may be used as an alternative to antibiotics and vaccines for protecting farmed fish against microorganisms, or microparasitic disease. It also can be used together with vaccines to improve the effectiveness and it is non-toxic to fish. Beta glucan also works well in conjoint therapy with other treatments.

Beta Glucan products have been in practical use for many years in animal feeds all over the world to improve health of aquaculture species, pets and farm animals. Pretreatment definitely increases survival rates with enhanced phagocytes function and the inhibition of cellular injury. An overall enhancement of immune response can be achieved by the use of beta glucan. This may in turn allow fish the opportunity to effectively combat disease. Using beta glucan as a dietary supplement carries the potential to significantly impact the quality of health as well as longevity.