“You and I know that captive breeding is the ultimate answer to current collection practices that are endangering the survival of too many species.”

What a great statement to open a new column on fish breeding. This thought led me right into the many ways to prove his statement, or better yet – and more constructively – to start a discussion on why we should breed fish in our home aquariums.

I begin with a short overview of the reasons why collecting fish for the home aquarium may have serious impacts on the future of these species in the wild and why we want to breed fish in our homes. Welcome to my view from inside “The Breeders Net.” 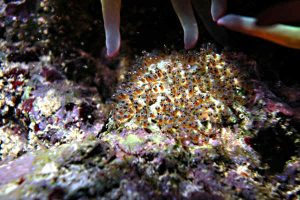 A clutch of clownfish eggs nestled under the parents’ host anemone.

So how bad off are we?

All of us understand that the fish we have in our captive care originated in one of the many oceans of the world. I believe we all know that someone has collected these fish and transported them across continents and countries to get to our LFS (local fish store). What I don’t think we understand is the ramifications of taking these fish out of the wild. Sure you’re saying there are lots of my “X” kinds of fish, and taking my fish out of the wild is no big deal. Accompanying that idea you’re thinking “well this is a fish with a huge ocean to swim in and the range where it can be found is enormous. Why would removing my fish be that important?” 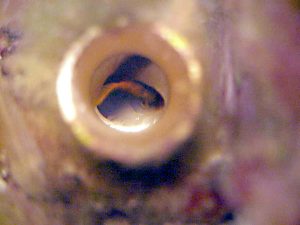 A male P. flavivertex cradles an egg mass inside his adopted PVC tube.

In reality is it important, coral reefs are the most biologically diverse shallow water marine environments, and they support hundred of thousands of animals and plants 1. With this enormous diversity comes fragility. As of Feb 2002, 58% of the world’s reefs have been reported to be threatened by human activities 2. Agriculture, deforestation, and development are introducing large quantities of sediments, nutrients, and pollutants into coastal waters. With this impact comes degradation of productive reef zones. Coral reefs are heavily fished 3. In regions between the Pacific and Indian Ocean, fishing with dynamite and poisons has devastated reef habitats 4. In a survey by Roberts et al of 1700 fish species, 26.5% had restricted territorial ranges and were considered threatened by over collection and devastation of their reef environments 5. That’s 450 species of fish which we could potentially see in the pet shops.

Conversely, it is widely believed that marine fish populations are some of the most resilient species — as they have wide geographical distribution. Following this erroneous assumption, over collection in one part of the ocean should not impact populations found in another area. Essentially moving to a new spot would ensure plentiful fish. Again, data suggests this is not true. A study by Bryant et al 2 examined the genetic diversity of coral reef fish and found that <28.7% had wide geographic ranges. This suggests that restricted range fish were more prevalent in reef environments, and that wide spread damage to this population could lead to waves of extinction.

So just how many fish are taken each month for the hobby? This question is a very difficult one to answer, mainly because accurate censuses of fish are not taken. Collectors harvest as many fish as they can to fill orders. Collectors need to account for shipping losses to make the required quotas and this is often to the detriment of the fish. As an example, in a report by Allen 6, he reported over 5000 banggai cardinalfish at a collection station readied to ship to distribution stations throughout the world. This was a monthly collection statistic, suggesting that 60,000 of these fish are collected yearly. This is a quantity of fish which is staggering to comprehend. Can the wild population of fish support this volume of collection? Only an accurate census will determine this. This is one of the many reasons why we should consider breeding fish at home and not subjecting the reefs to future potential devastation. 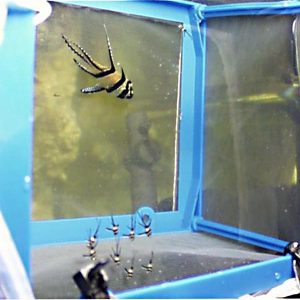 So how are we doing?

Well, that all depends on who you talk to: aquaculture of fish is not new, the Romans tended beds of oysters and medieval monasteries had ponds in which they grew fish to eat. However, commercial production of fish is still in its infancy. A few food fish are grown in commercial numbers, but reef fish are not. Commercial firms interested in producing reef fishes must deal with a balancing problem. They must find a hardy, resilient, fish species that has an established appeal, and is omnivorous so that food won’t be problematic. The fish species must have defined breeding habits, with available fry foods, and the breeder must be able to get brood stock to ensure genetic variability. This all gets weighed against food costs, growth rates, the ability to control reproduction, adequate survival of young, and market value. If, after all this balancing, the fish is profitable, all the better. Commercial breeding facilities have focused on high fecundity fish that are hardy, readily accept available fry foods, and have mass appeal. However, many of the fish in our reef tanks do not fall into any of these categories. At the end of this column I will present a list of species that are currently bred or under investigation for possible commercial breeding. This way you can see which way our hobby is heading. 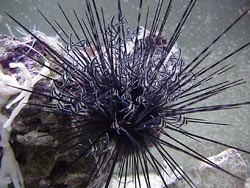 Jeuvenile banggai cardinals seeking shelter amongst the spines of a sea urchin.

With this in mind, I’ve created this column.

Over the next few months we will discuss current topics in home breeding of marine fish, and we’ll focus on a few fish which have been bred with success and use them as examples for future endeavors. Additionally, I’ll try to remove the mystery involved in raising fry, describing simplified techniques and tips on how to bypass the common stumbling blocks. Some examples are: problems associated with pairing of the parental fish, and more often the problems associated with raising those pesky minute fry to juvenile stages where they will actually eat food we can supply with ease.

Breeding fish at home does appear intimidating, and in fact only recently did the techniques/resources required to raise fish become available to the hobbyist. (Martin Moe’s been doing it since the 70’s using ocean water with live plankton. It’s just easier now with new products) Commercial firms and universities that have financial investments in equipment, brood stock, and larval foods to produce a few offspring designed these techniques and resources (particularly foods). Now, by making a few phone calls and ordering commercially prepared planktonic foods (such as phytoplanktons and rotifers) many home aquarists are successfully breeding certain fish on a small scale.

If we entertain the idea of actually breeding the fish we desire and keep in our own aquarium, not only can we eliminate future capture of these fish, but the surplus can go back to the LFS — or better yet, be bartered with our peers.

Future topics of “The Breeder’s Net” include:

Enjoy your aquarium and we’ll peer thru “the net” again next month.