Building a Small Scale Propagation System – Or so I thought!

Article and photography by James Curry

In the winter of 2007, my partner Russ and I decided to go into business to try and provide comprehensive cost effective reef services to the tri-state area reefing community. The genesis of the idea came from both our passions for the hobby as well as an interest in advancing the survival and rejuvenation of the world’s natural reefs, the latter we thought, best facilitated on our end by championing the cause of captive coral propagation. We were quick to agree that we would both have facilities at each of our homes. He was going to focus on Large Polyp Stony corals (LPS) and I was going to grow Small Polyp Stony corals (SPS) – this was the only easy business decision to make since our hobbyist strengths clearly reside in these respective areas;  I spent a lot of time thinking, planning and reading as the SPS propagation system would be plumbed into my main display. The initial plans called for a total of 575 gallons including a 180 gallon display that would rival my in November 2006 Advanced Aquarist On-Line Tank of the Month feature. The system turned out to be a scaled down total water volume of 275 gallons.   In addition to my interest in propagating SPS, I wanted to share the experience and the Do It Yourself (DIY) ideas that I gleaned from fellow hobbyists over the years as well as my general knowledge of SPS growth and survival. I created a thread on ManhattanReefs.com in the Coral Farming forum outlining the progress from beginning to end. The intent of the thread was to chronicle the cycles of harvest for SPS as they mature through a system, and to help show the community how simultaneously easy and difficult it is to see a project like this through to fruition. Additionally, we wanted to educate hobbyists on the “how-to’s” of this type of endeavor. After much research and plowing through numerous articles and books we now have a thriving SPS prop system. Our first cycle of harvest is scheduled to be available for the December 9th, 2007 Manhattan Reefs Frag Swap at Pace University in downtown NYC  It all started out with a six foot acrylic tank from www.Glasscages.com – their glass tank work isn’t the cleanest and their acrylic work wasn’t polished either – but I wasn’t looking for a polished display for the grow out section of this system – it had to be functional, sturdy enough to last and cost effective. 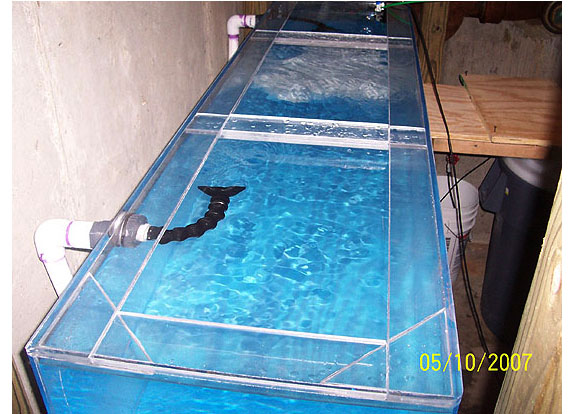 The basic premise for my idea revolves around understanding cycles of harvest and growing coral fragments at timed intervals. Each cycle would have some common as well as rare SPS. Each fragment will be plugged and mounted to the rack that I am about to illustrate. Each rack contains 100 plugs which I believe have enough room to not compete and cause combat issues – we will have a total of 4 cycles and anticipate a good yield from each rack cycle. Many people critiqued the idea of using the PVC rack and plug system and asked why I didn’t use egg crate. My experience shows that the problem with the fragment plugs and egg crate is that they tend to topple over when there is too much flow and also tend to rattle in the egg crate – I have no empirical evidence, but I believe that constant instability to the body of the animal impedes its growth capability or patterns. The coral plug system illustrated below (the brain child of Tristan Wilson) slides on just snug enough to allow easy removal without struggling, but is tight enough to prevent “rattling.” 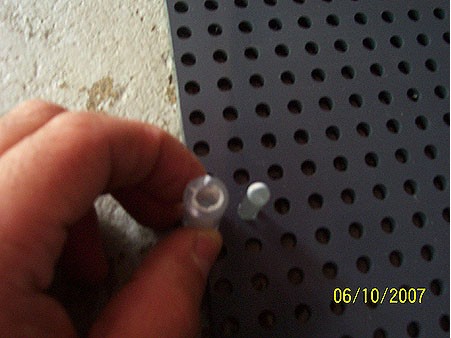 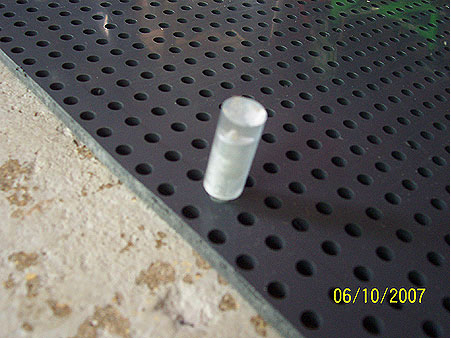 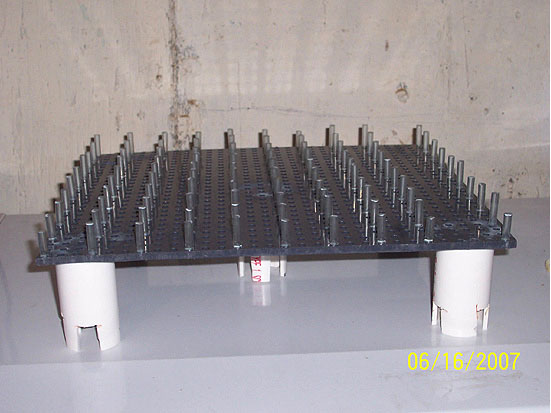 Each cycle will begin its growth process under T5 lighting (325 watts) using a combination of grow out (daylight) and Actinic bulbs (blues) to promote maximum growth and initial color development. After the last cycle enters the trough, the first cycle rack will enter into the “coloring up” phase under a 250w metal halide pendant – we are currently using the Phoenix 14k double ended lamp and are happy with the color and growth from them. It is entirely possible that we will move to the new IWASAKI 14k bulb that recently came to market as this lamp seems to offer a little broader spectral “punch” while retaining its coloring characteristics Another thing that I thought would be good while transitioning the corals in support of the above was to not only transition them across, but UP, closer to the lighting as well – this is not rocket science, patent-able or the like – it does, however make total sense. Consequently, the second and third racks in turn will be higher than the first with the last (4th rack) being the highest and closest to the metal halide lamp. 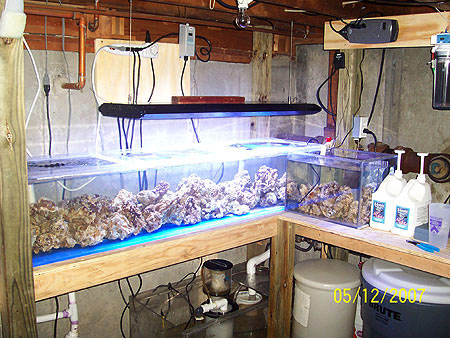 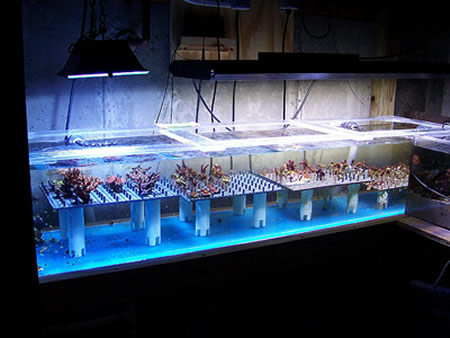 In total, the system has been up since May 2007 and received animals in June 2007. Since it is a work in progress, we have had a whole cycle go belly up and STN – primarily due to fluctuations in salinity and a bad spike in alkalinity. While this is a small SPS propagation system compared to some of the aqua-culturing facilities in the US, it has the potential to house over 400 fragments making available 100 at each cycle. My only regret was not allocating enough space for two tanks of the same size.  In subsequent articles in this series, we will take a in-depth look at the building of the entire system from carpentry, plumbing, water movement, electrical and lighting to the actual construction of the frag racks themselves. I’ll also pay particular attention to the mechanics and husbandry of working with the animals in the system and document the success and failures we’ve encountered along the way. Until then, feel free to contact me with any questions, comments or suggestions.