Dots on the Glass: Collumbellid Snail Reproduction in the Aquarium

I recently started a new saltwater system and very quickly discovered a need for a cleanup crew. Fortunately, I’ve been associated with the Reef Stewardship Foundation (RSF, formerly also known as “The Desirable Invertebrate Breeding Society” or “Project DIBS”), which has as some of its goals:

Through the Foundation, I was able to locate an aquarist who sent me small populations of several species of appropriate animals. These creatures make good cleanup crew members, are known to breed in aquaria, and whose offspring will grow to adulthood in reef tanks. The wonderful thing about these animals is that their populations can expand over time to meet the cleanup needs of any system, also making them very economical choices in addition to the important conservation considerations.

Within a few days of receiving my cleanup crew shipment I began seeing small lenticular egg capsules (about 2 millimeters across the circle, each containing about six eggs) appear on the glass. I took a photo of one of the capsules and asked if anyone at RSF knew the species that made them. To my surprise, no one available at the time could identify the species that d

eposited the egg capsules. For some of the RSF invertebrate species that we know can reproduce in captivity, we still know very little about their reproductive behavior; we don’t know how or why they can reproduce in captivity. Knowledge of how the larvae of these species develop can make it easier to tailor culture tanks to the species’ needs, allowing as many of the larvae as possible to reach adulthood. With that in mind, I began an effort to document the development of these eggs in the effort to aid future identification of these egg capsules and to find out why these animals are
successful at reproducing in hobbyists’ aquaria. It’s my hope that the knowledge gained can help to maximize the production in captivity of these helpful creatures.

Although the developmental sequence is shown, the reader should note that the photos in this article are not a true series taken with one egg capsule. My techniques for photographing these eggs improved during the course of this process, so I went back to re-photograph early stages of development later with other egg capsules.

Snail development, as with most animals, begins with parental gamete combination into a zygote-a single large cell that is also called the “fertilized egg.” In this species the mother snail deposits 5-8 of these zygotes-along with additional nutrients in the form of yolk for each individual zygote and also a nutrient-filled fluid that surrounds them-in a membrane capsule attached to a hard surfac 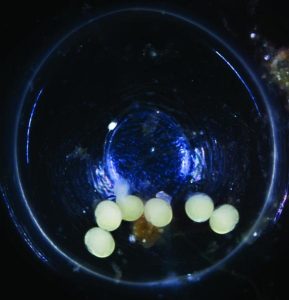 e, in this case the aquarium glass. The eggs are released from the oviduct under the right edge of the snail’s shell aperture and transferred to the bottom of the foot. The membrane capsule is secreted through an opening in the bottom of the mother snail’s foot. This anatomy is perfect for leaving eggs behind on hard surfaces that she visits without exposing the snail to any increased risk of predation. She then secretes a seal that closes the capsule and isolates the developing embryos from their surroundings until the young are ready to start feeding from the larger environment.

It’s important that the female eat well in the time before depositing eggs: Until the larva leaves the protective membrane and begins to hunt and feed from other sources, the nutrition contained in the yolk and the surrounding nutrient fluid is all the energy reserves that the larva will be able to draw upon to fund the incredible changes that lie ahead. All of the energy for every egg capsule the mother leaves behind must come from the mother’s energy reserves, and this amounts to a significant amount of parental “care.”

Fortunately, the snails provided by RSF eat nuisance algae and providing enough algae for them to breed is not only not a problem in most aquarists’ tanks, but is a positive benefit from these species’ standpoints. 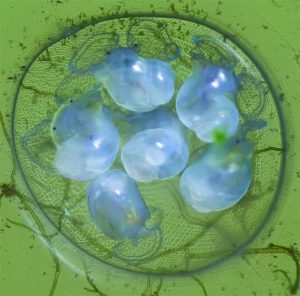 Late stage veliger larvae. The shells are well into their second whorl and the velar lobes are well developed.

Developmental changes for the zygotes begin with a simple act. The cell divides itself into two cells and, with that, the zygotes become embryos. The process continues at roughly a cell division every hour or two at tropical temperatures depending on the specifics of each species, with two cells dividing into four, four into eight, and so on. When an embryo reaches roughly 120 cells (around seven divisions of all the cells), the cells organize themselves into a blastula-a round, hollow aggregation of cells that marks the first time that it really makes sense to talk about an inside and outside of the embryo.

I have no way to tell if it is true for this species of snails, but for many invertebrate larvae the very next cell division-num

ber eight-results in creatures with rudimentary but functional locomotory systems, sensory systems, mouths, and digestive systems. That is, eight cell divisions-8-16 hours at tropical temperatures-and only one cell division after the very first time the creatures even have insides results in creatures that can search for, move to, eat, and digest food. Incredible! With the capability of feeding itself, the developing creature has become a “larva.”

After this, the larva’s major systems continue to develop and become more complicated for the next couple of weeks. A transparent shell develops. The larva’s small foot begins to grow. Finally, a cilia-covered structure called the “velum” develops. It’s this velum that gives snail larvae their name: “veligers.” The velum looks like nothing more than it looks like giant Mickey Mouse ears extending out of the larva’s shell. These “ears” are (comparatively) giant lobes wit 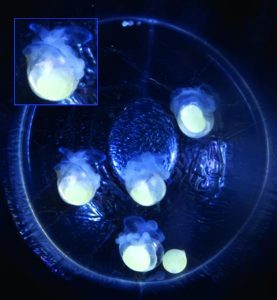 Early larval development. The shells are developing and the velar lobes have formed.

h long cilia around the margins. The snail’s mouth lies at the intersection at the base of the two lobes. With their beating actions, the cilia on the velum allow the larva to swim relatively quickly. In addition, the cilia also propel small food particles toward the snail’s mouth. If this were a species with a planktonic life stage, the development of the velum would mark the point where the larvae could begin their life in the plankton, moving to and eating the unicellular algae that proliferates there.

But, this stage is where these specific RSF snails differ from the majority of marine invertebrate larvae and is what makes them easy to breed in captivity. These snails remain inside the egg capsule membrane for several days after the development of the velum, continuing to feed on the nutrient-filled fluid their mother deposited in the cap

I was surprised to find a sudden large developmental change one morning (only twenty-eight days after introducing the parent stock to the aquarium). Overnight, the young snails had pulled the two lobes of the velum together, forming them into a hollow tube. With this development of the feeding tube, the larvae finally really began to look like their adult relatives. At this point, the creatures are no longer veliger larvae and have made the transition to juvenile snails. 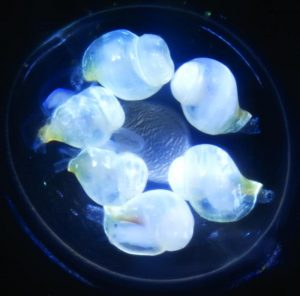 Juvenile larvae leaving the larval membrane. Inset: One of their siblings-already escaped-cleaning the aquarium glass

Within a couple of days after this species’ transformation into juveniles, the plug over the escape hole disintegrates and the new juvenile snails escape to try their luck in the outside world.

To give you an idea of how quickly this process took place, here is a timeline of the major events that occurred:

Thirty days from parental introduction to the aquarium to the release of free-living juvenile snails! 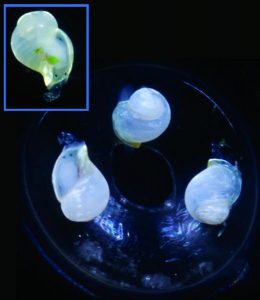 By comparing the first two whorls of the juveniles’ shells with the remnants (eventually, snails’ shells begin to wear with the rigors of life in the world) of the first two whorls of the various adult snails in my system, I theorized that the eggs likely came from a small species of Collumbellid snail, a voracious eater of hair algae. It looks like my system will soon be crawling with these snails. Once the algae in my system is under control, I can start removing snails as necessary and trading them with other hobbyists and fish stores, thus allowing me to export nutrients from my system that are bound up into the snails’ bodies. I much prefer to export nutrients by simply removing snails than by scrubbing hair algae with a toothbrush. Plus, these snails are a more valuable commodity to me than the hair algae that can only be turned into compost for my garden.

A Call to Captive Breeding

Honestly, I can hardly see a reason not to participate in the captive breeding of marine invertebrates. We hobbyists need clea 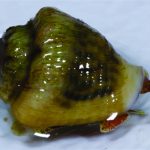 One of the RSF Collumbelid snails that I believe to be the same species as the snails that developed from these egg capsules.

nup crews. Constantly removing cleanup crew members from the oceans that don’t survive well in aquariums is both expensive and-finally-not nearly as necessary as it used to be because species have been found that are fairly easy to raise in captivity. I’m proud to be a part of the Reef Stewardship Foundation’s efforts in these areas. Hopefully, as the knowledge base grows, more easily raised species will be found and protocols will be added for harder species so that the foundation’s list of captive-bred species available to hobbyists will continue to grow.

Shortly before finishing this article, I managed to catch sight of a mother Collumbelid in the process of depositing one of these egg capsules (and that’s how I knew that the eggs in photo 1 were only a few minutes old). So, the sighting confirms the theory about the identity of the snail species and gives me another photo of these lovely creatures to show you. 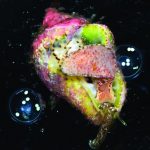 One of the RSF Collumbelid snails attaching egg capsules to the aquarium glass through an opening in the bottom of her foot. Note in the second photo how the female folds her foot back on itself so she will not damage the eggs as she moves off.

I would like to thank my wonderful family for their continuing encouragement and enthusiasm for my aquarium hobby, and for their love and support. I would also like to thank Ron Shimek, who encouraged me to write this article and gave generously of his time and knowledge to help me edit the manuscript and ensure that I explained the science behind the snails’ development correctly.

All photos in this article copyright © 2009 by Andrew Berry.