Dr. Sanjay Joshi: The Man Behind the Photons

This past July, Reefs Magazine editors Jonathan Hale and Randy Donowitz had the opportunity to sit down with Sanjay Joshi at his home and office in State College Pennsylvania. Known throughout the hobby via his numerous articles, lectures and Reef Lighting Guide database as the authoritative figure on reef aquarium lighting, we wanted to find out a bit more about the man behind the photons. 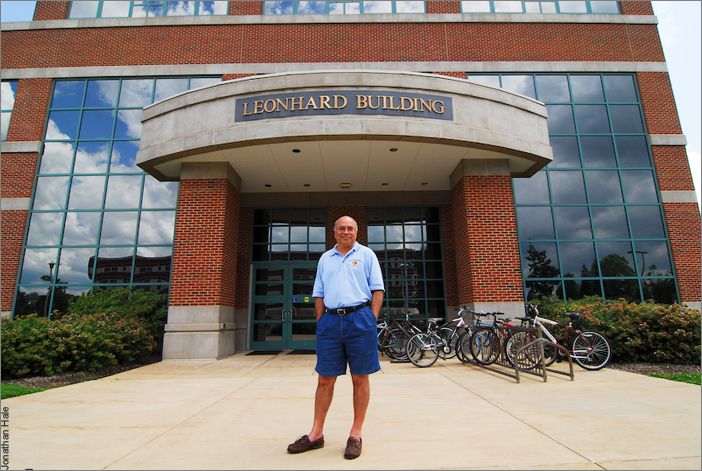 RM: Most hobbyists familiar with your contributions are aware that you are a Professor at Penn State. What is your official capacity here and how long have you called Penn State your home?

SJ: I’m a Professor of Industrial and Manufacturing Engineering. Unbelievably, I’m entering my 21st year here. This was my first job out of graduate school, and given that I like it here, it could be both my first and last job.

RM: How did you end up here?

SJ: Well, I grew up in Bombay (now Mumbai), India. Both my parents were doctors, so I went the other route for educated Indians –Engineering. My undergraduate degree is in Production Engineering from the University of Bombay and from there I came to the U.S. for graduate studies. I started in beautiful Buffalo NY and after completing my M.S. in Industrial Engineering I headed to Purdue for my PhD in Industrial Engineering where I met my wife Elena and both of us have been here at Penn State since. We even have our offices adjacent to each other in the department. {laughs}

RM: What exactly is meant by Industrial and Manufacturing Engineering? What areas does this designation cover?

SJ: Well traditionally there are 3 different areas within the field of Industrial Engineering. Now there are actually four. The first is Manufacturing —-really everything involved in the actual production of a product like designing, programming and machining things that result in an object prototype or mass produced final product. Next is Operations Research— this deals with the optimization of systems and techniques for optimization. The third is called Human Factors or Ergonomics—.Here the concerns are with systems from the standpoint of integrating people into them. Things like workplace design and how a worker integrates into a system, or the impact of reaching in a certain way on your back, lifting etc. and trying to optimize for human physical limitations. Also safety and workplace injury type issues come into play here. The fourth area is Information Systems and Technology which is the newest aspect of the discipline and involves dealing with data– programming, data collection and analysis. Really, we are talking about using new information technologies to provide real time information for decision making to instantaneously evaluate production and manufacturing processes, inventory etc. in a dynamic changing environment. For instance, since all manufacturing is currently programming based, why not have sensors that instantly record data about production? Like this new RFID stuff that’s coming up where every piece, or part, or product would contain essentially a computer chip so it could be tracked and scanned for life. 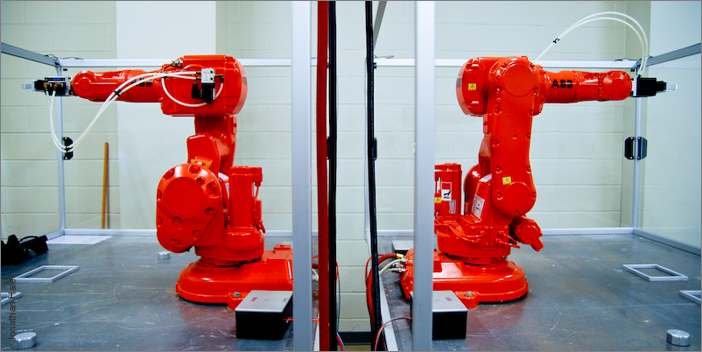 RM: Can you say a little more about that?

SJ: Imagine a Walmart where they can just run a computer program and have an instant accounting of everything in their entire store and its location. It would make inventory and tracking much easier and also make theft much more difficult. Some people oppose this kind of technology because it will enable a product to be tracked for its entire life— how it was disposed of etc. – and some worry about invasion of privacy issues and having their habits exposed. Really this is an important area—the social aspects of technology— technology can do a lot of things, but what is the social impact of these things? The most obvious example of this is cloning. We can do it, but should we? What are the implications? And when we begin talking about Nano technology, we are talking about particles that we can’t even see. How does that affect someone working with them? What if they get inhaled? What impact does this have? Really, no one knows. So these are some of the scary elements of technology, the legal elements. And there are a lot of things that have to come into play to make a technology real and this social aspect is part of it. It is a really challenging and important area. We have a whole Department on campus that deals just with this stuff.

RM: What courses do you currently teach? 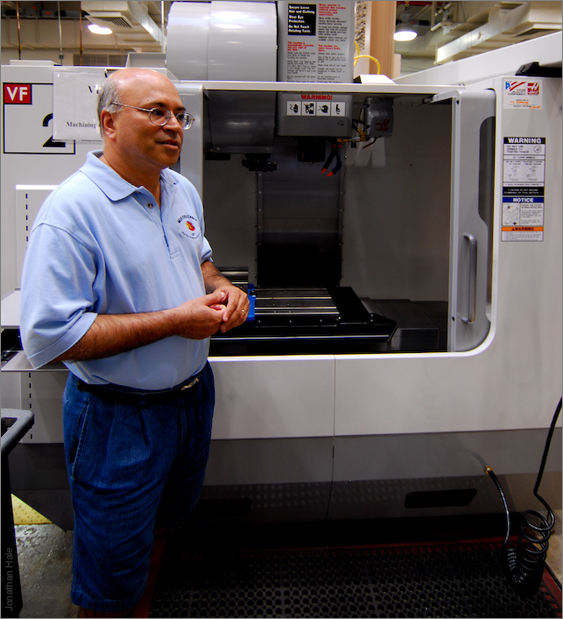 RM: A career in academia involves a lot more than teaching courses. What are some of your past and current research interests?

RM: The nano engineering is fascinating. Can you say a little more about what you are working on?

SJ: The research focuses on growing poly aniline nano wires in situ. When you manufacture at the nano level, you need wire to make circuits and sensors. How do you ship, store, handle and place something that small? It is easier if you can just grow them in place. We do this by a process we are calling Step-Grow-Place. Simply put, a reusable mould template is placed where the wire needs to be grown. We fill it with a liquid polymer and we pass an electric current through it converting it into a solid polymer wire via the electropolymerization process. The reusable mould is then stepped to the next location and the process is repeated.

RM: Do you think all this formal training has influenced your approach to reef keeping?

SJ: Yes certainly. When I design an aquarium system, I think like an engineer would. How do I accomplish my goal most efficiently? How can I build in safeguards and redundancies where necessary? It also helps to have all the technical skills and access to the machinery to build anything I need to. Additionally, it helps in problem solving when things go wrong. It has also driven my desire to understand, measure and quantify the “what and why” of reefkeeping practices. 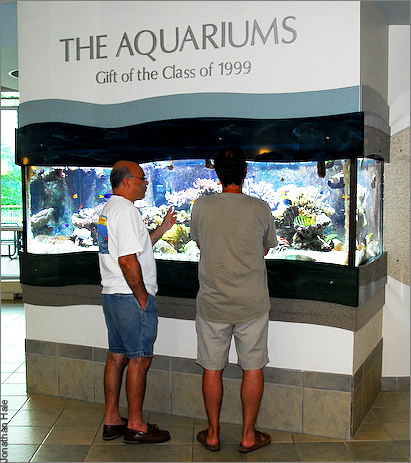 RM: You mentioned earlier that you are originally from India. Were you involved with aquariums while you were growing up there?

SJ: Yes I was keeping aquariums since I was a child. They were freshwater of course. I was breeding Angelfish and Bettas and other live bearers. The hobby wasn’t huge, but there were a few shops in Bombay.

RM: Are you aware of any emerging marine or reef hobby developing on the sub-continent? With a rapidly developing economy, a burgeoning middle class and relatively close proximity to tropical seas, I’d expect to see something going on.

SJ: Yeah there is a small scene starting to develop. There is actually a hobbyist board with a marine section. They even have trade shows. I stumbled across one on one of my visits back. There was even a guy with a few live corals and anemones in a tank though he didn’t really know what he had. I tried to tell him, but he wasn’t really interested :laughs: Most of the products are Chinese, but certainly they had everything you would need to build a nice reef system. 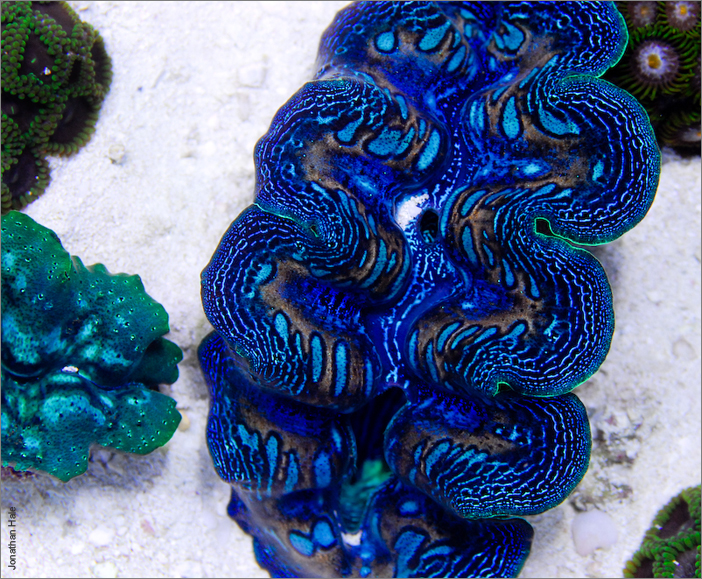 RM: Are they aware of you? I’d imagine you might be perceived with pride.

SJ: {laughs} Not that I know of, but I think someone on that board was asking about me—in the context of lighting of course. 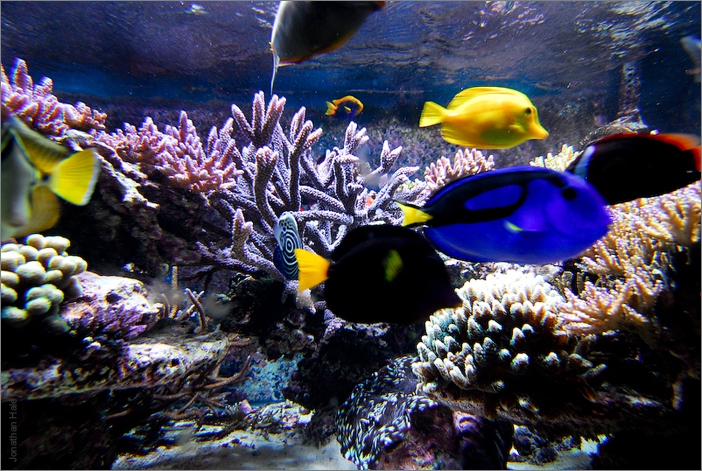 A section of the spectacular 500g reef system at Penn State.

RM: You’ve been involved with the hobby for a long time and maintain two of the country’s best known reef systems. Are you happy with the current state of the hobby?

SJ: In general, yes. The hobby has gotten to the point where we have figured out how to keep many of the animals we desire for long periods of time and we have developed the techniques and equipment to make it easy for a wide range of hobbyists to replicate successfully. As with most things, the access to lots of information at your fingertips has helped a lot. 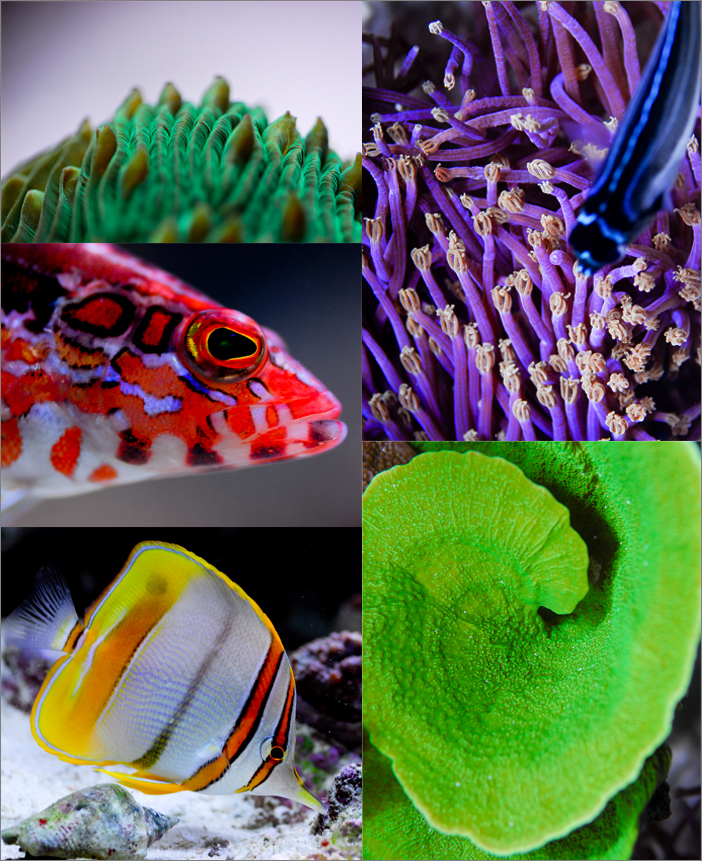 RM: Anything you are not happy about?

SJ: We’ll I’m not so into the designer coral craze. Not that they aren’t beautiful, and not that I don’t have many pieces that would fall into that category. It just seems that the collector mentality gets in the way of people letting the colonies grow. It kind of makes the hobby operate at the frag level. I like nice big colonies {smiles and gestures to the large reef behind him}.

RM: What areas of the hobby currently interest you the most?

SJ: Well, the area that we don’t have a really firm understanding of is the complex bacterial interactions that are taking place in, on and around corals and in our systems. There is some really interesting research going on in these areas, and once we learn a little more, I think it is really going to change the way we look at our systems and how they function. My cursory understanding of some of the preliminary research is that things like skimming and carbon and nutrient cycles are not operating as we commonly think they are. I think this is the exciting new frontier. Some hobbyists are intuiting some of this stuff by using amino acids and other “systems”, but I don’t think they really know exactly what or why things are happening. 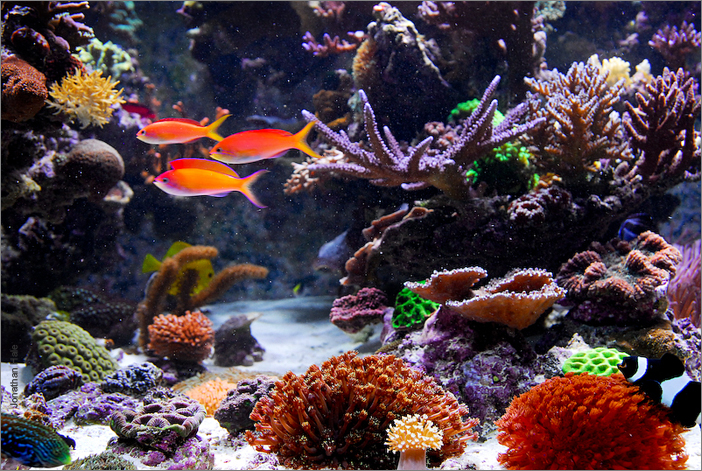 RM: Our readers need to picture you running excitedly in and out of the room in the middle of the interview. What is going on?

SJ: I have a hybrid pair of black ocellaris and onyx percula clownfish that I am trying to breed. The clutch of eggs is scheduled to hatch tonight. It typically happens shortly after the lights go out, I need to keep checking so I don’t miss it and lose the larvae. They are easy to catch if I’m on it in time as they are attracted to light. I have this collection contraption that has a small light attached to it, so they swim toward it if the room is dark and I can easily suck them up. The plain ocellaris I used to raise would spawn like clockwork every 14-15 days and the eggs would hatch on the eighth night. These should do the same, but you never know. The old clowns would spawn on a tile so it was easy— I’d just remove the tile and go to sleep and in the morning there would be free swimming larvae—no collection needed. I didn’t want to disturb these guys and try to get them to use the tile as I screwed up a few batches of eggs from them already. A few times I was away when they hatched, and once another larvae collection device I tried didn’t work well. This time, I’m gonna get them. {laughs, and runs out of the room}
(Editors note: Sanjay was indeed successful, and he has agreed to chronicle his experience trying to rear the larvae for Reefs Magazine. Look for the story in the Winter 2008 issue). 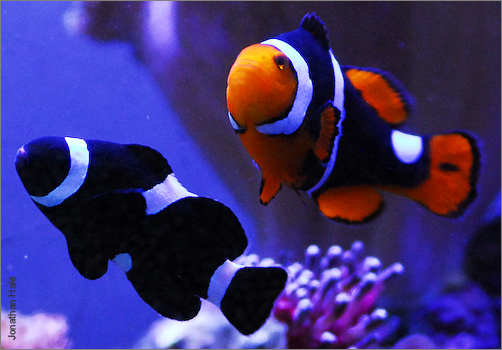 RM: This excites you more than corals doesn’t it?

SJ: Sometimes. I’ve pretty much reached the point with corals that they just grow. Not that I don’t have my problems like everyone else, but I basically know what I’m doing in most situations. This is more challenging and keeps me on my toes. I’m dealing with lots of unknowns and that is exciting although it can be frustrating too, just like corals used to be. 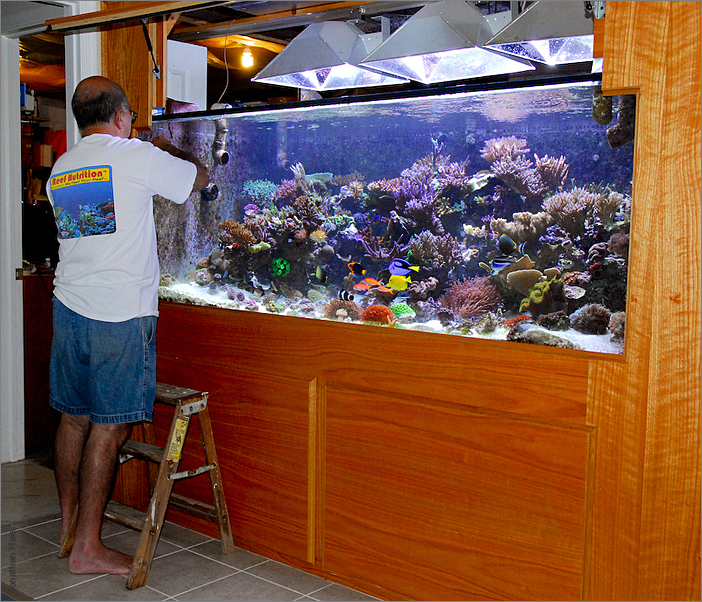 RM: Well thanks so much for the opportunity to speak to you in depth. You see, we promised — not a single question on lighting!!!!

SJ: {laughs loudly}—thank you, at this point, it really is the reefing question I like answering the least—“what lights should I use on my tank.”

Photography in this article by Jonathan Hale