The promise of LED technology to be able to offer an infinite range of color and controllability is finally reaching the point of reality. LEDs have to potential of offer unparalled controllability allowing users to control a wide range of features such as – spectrums, color temperatures, ability to vary these throughout the day, add special effects such as cloud covers and lightning, tight integration with modern aquarium controllers, wi-fi and internet based control. Additionally, the ability to upgrade using single platforms can provide users with a path to address rapid obsolescence as well as the ability to tweak the fixtures to the application. The new “high end” LED fixtures such as the Ecotech radion Pro, GHL Mitras, and AI Hydra are perfect examples of these capabilities.

Continuing in the same vein as my previous LED lighting tests, this article presents data on light intensity and spread along with spectral plots for these new LED fixtures. Table 1 presents a list of the LED lighting fixtures reviewed in this article. Each of these was tested using the same set up as my previous reflector tests, using a 3’X3′ grid with a spacing of 3″ in the X,Y direction. The fixtures were centered on this grid, and PAR was measured as PPFD (Photosynthetic Photon Flux Density) in micromoles/m2/sec using a LICOR 1000 data logger and a LI-192SA underwater cosine corrected sensor calibrated for both air and water. The data logger was set to average 5 readings for each data collection point. The data was imported into Microsoft Excel for analysis and the data was plotted to display the light spread and intensity at various distances. 4 plots of the data with 2 plots at each distance were generated showing:

The spectral distributions were measured using the Licor LI-1800 spectroradiometer. The spectral data was collected from the various LEDs and normalized such that integrated light output (spectral irradiance) between the wavelengths of 400-700 nm was 100 Watts/m2. Data was collected at full power output for the individual channels of light control (e.g., Blue, white) along with data with ALL LEDs on at full power. The data was normalized so that the total irradiance was at 100 Watts/m2 over the wavelength range 400-700 nm. The various LED color outputs were then scaled by the same scale factor to allow of determination of the contribution of the various LEDs to the full output. The results are plotted as a Spectral power distribution plot. The fixtures were tested for light spread and intensity at 24″and 30″, unless otherwise noted. Power draw was measured with a Kill-A-Watt meter.

* Not available in the current version tested

The radion Pro is the latest generation of the Ecotech Radion LED series. The relevant information regarding the various LEDs and other features is summarized in Table 2. The basic Led arrangement is shown in figure 1. Figures 2 and 3 show the light distribution and the spectral outputs of the various LEDs. 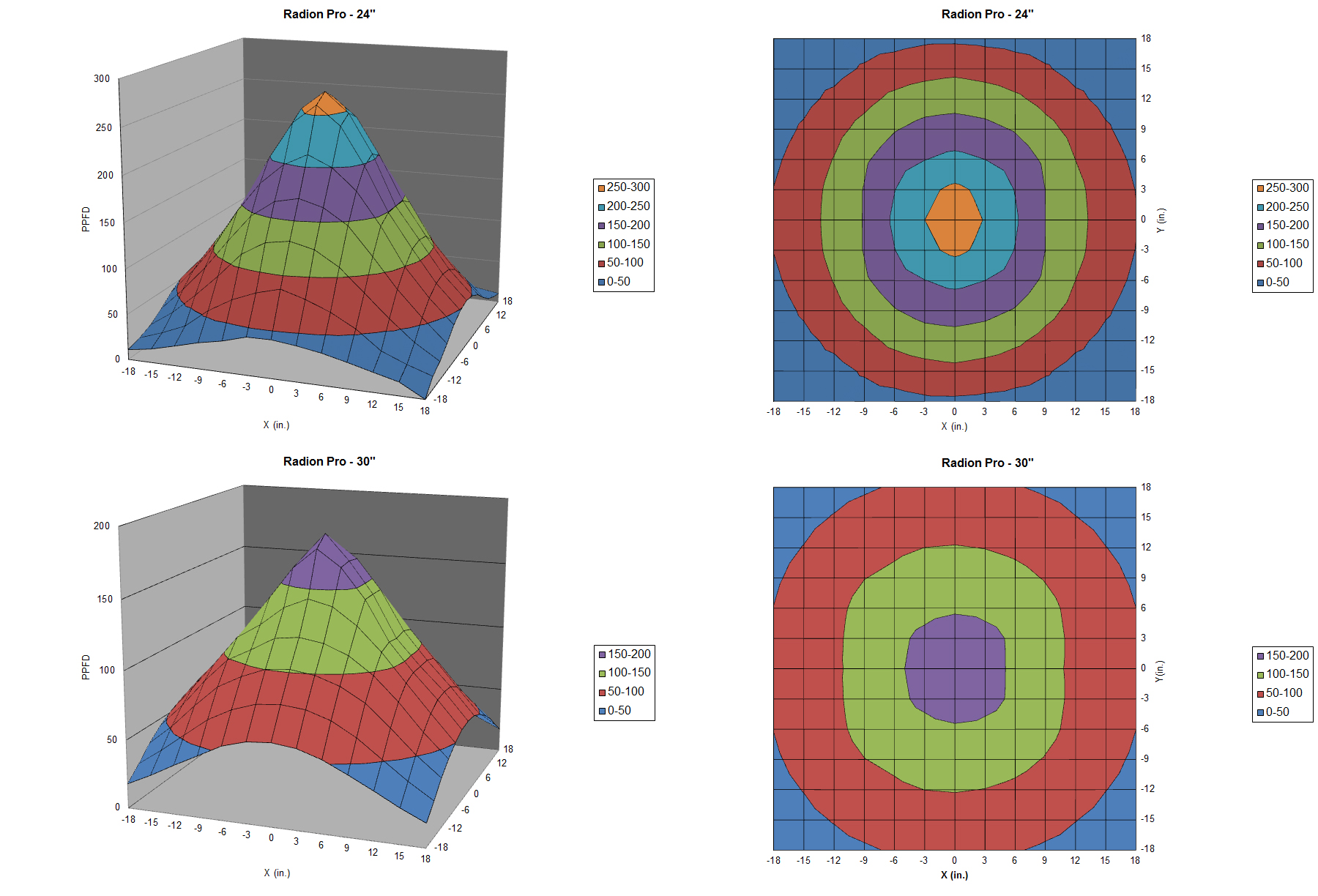 Figure 2. Ecotech Radion Pro, Light Intensity and Distribution at 24″ and 30″ 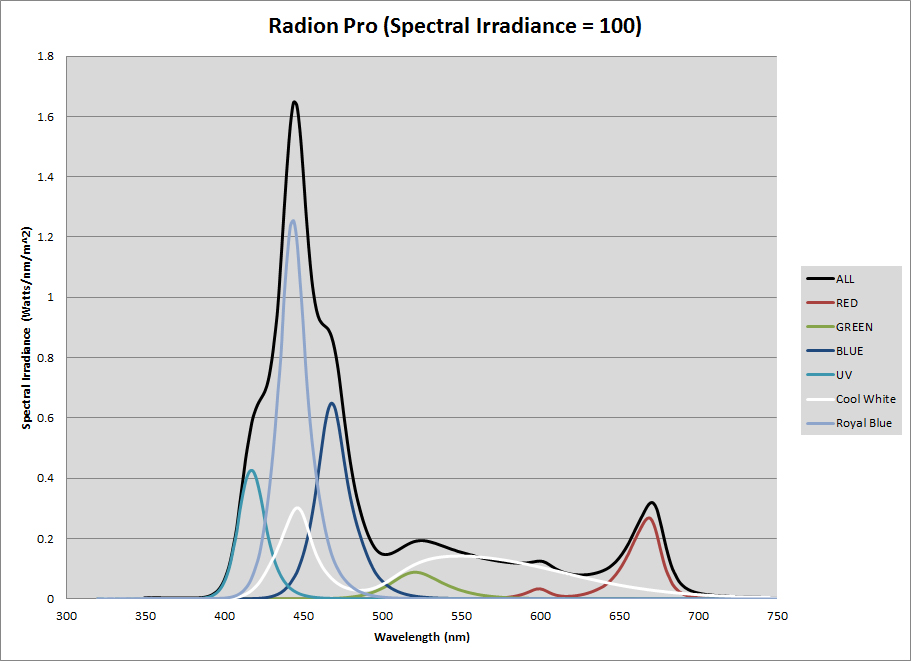 The AI Hydra is the newest of the Aqua Illumination (AI) product based on the same AI Vega platform. It offers less flexibility than the AI Vega in terms of control however it still provides 7 channels of control which is more than adequate to create a wide range of colors. The LED pucks are not upgradable as they are in the AI Vega. The relevant information regarding the various LEDs and other features is summarized in Table 2. The basic Led arrangement is shown in figure 4. Figures 5 and 6 show the light distribution and the spectral outputs of the various LEDs and control channels. 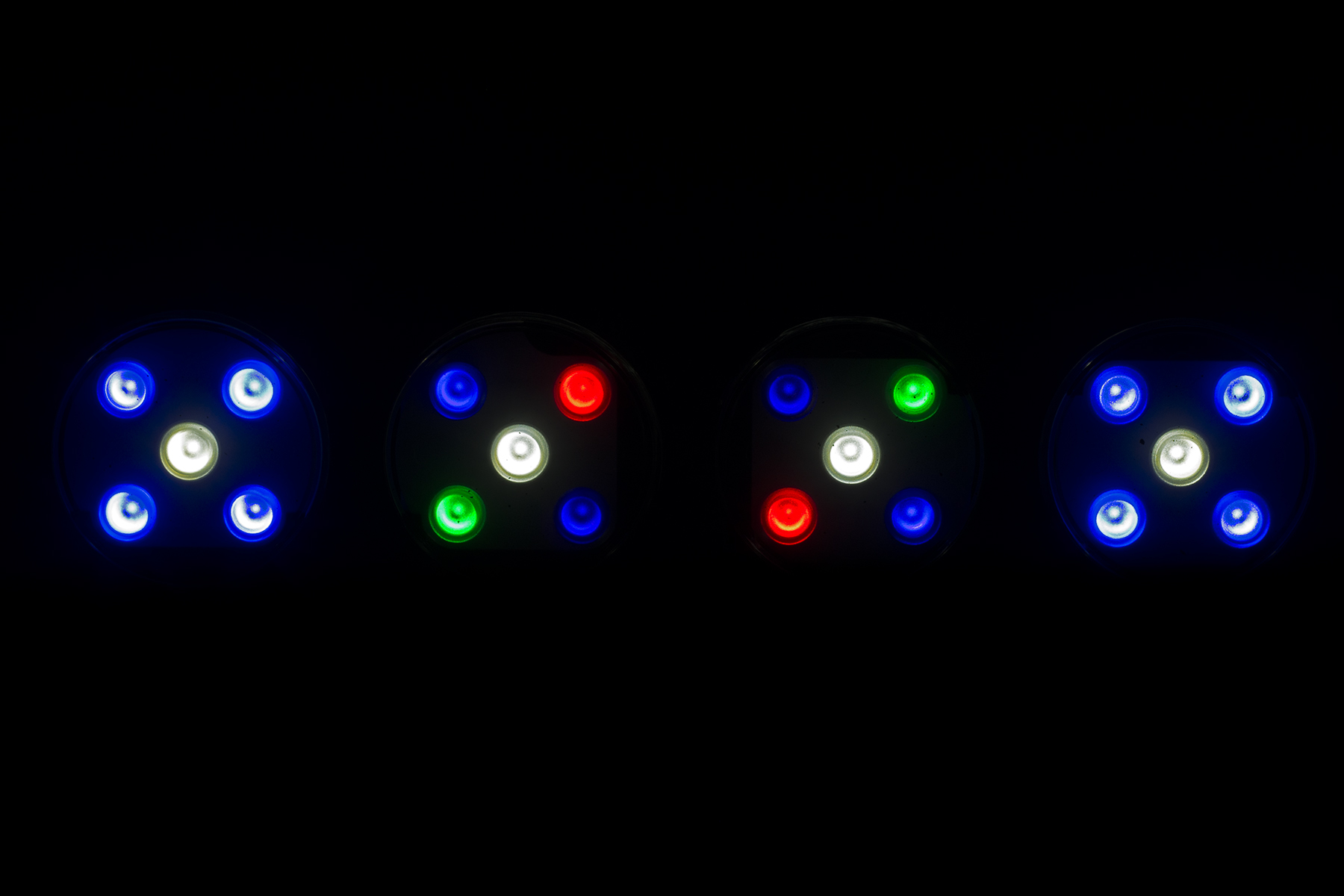 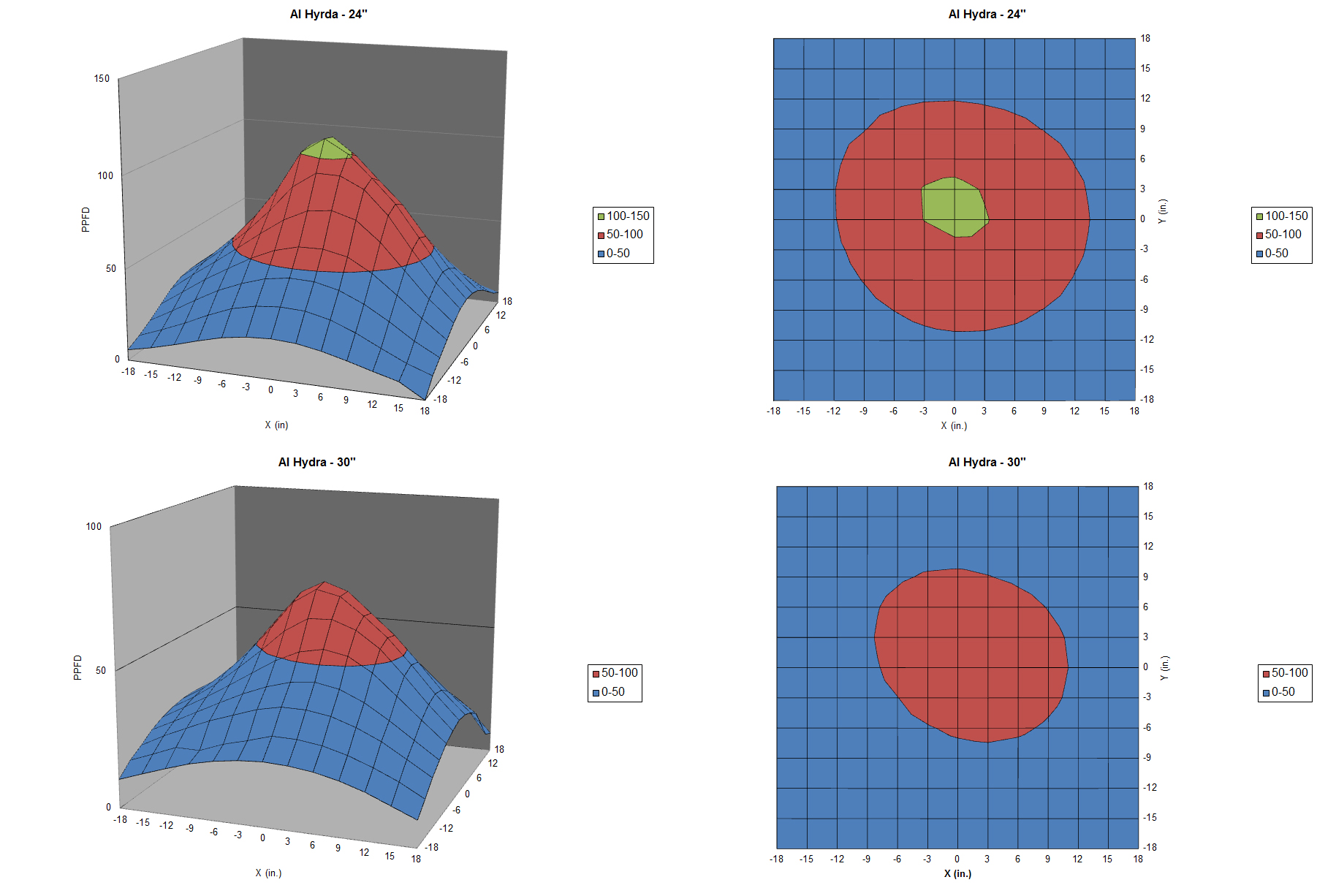 Figure 5. AI Hydra, Light Intensity and Distribution at 24″ and 30″ 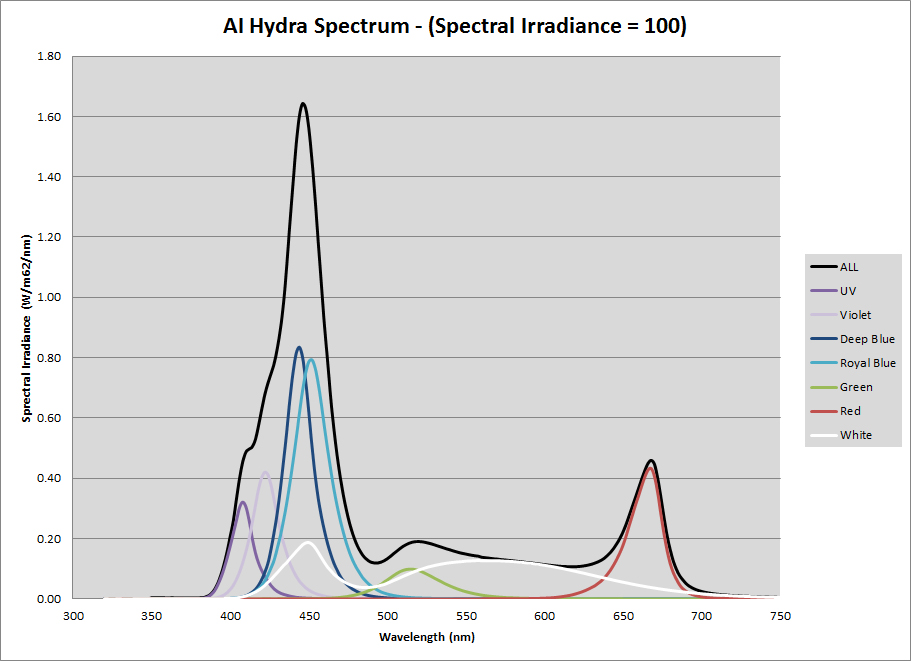 The GHL Mitras are LED pendant lights from Germany. The Mitras LX platform is the basis for a wide range of LED configurations. Two of them the 6100HV and the newer 6200HV are tested here. The relevant information regarding the various LEDs and other features is summarized in Table 2. The only major difference between the 6100HV and 6200HV is in the configuration of the LEDs. All other features are identical. The 6200HV has more blue and less red whereas the 6100HV is designed to provide a fuller spectrum. Both the 6100HV and 6200HV were tested for spectral output, but only the 6200HV was tested for light distribution. 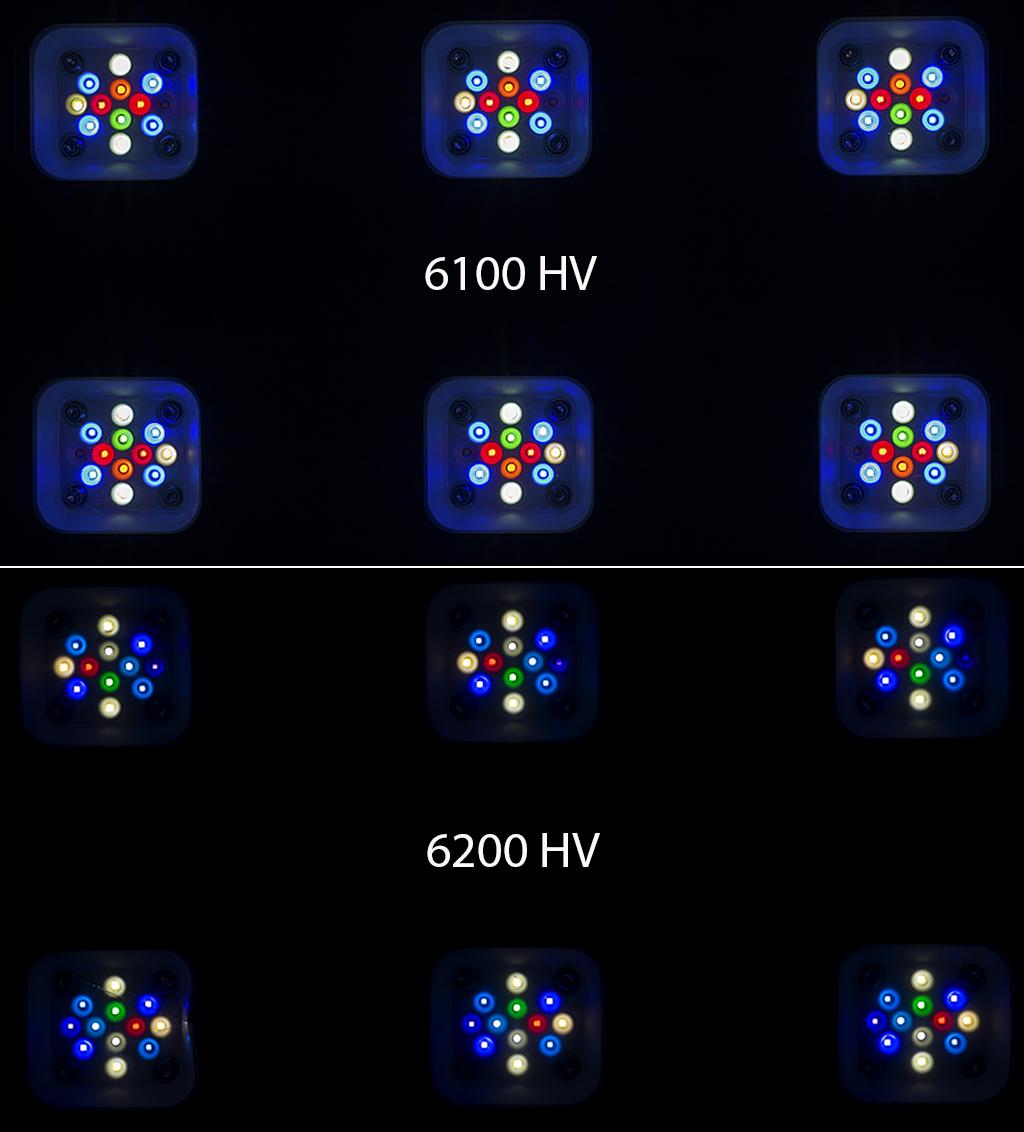 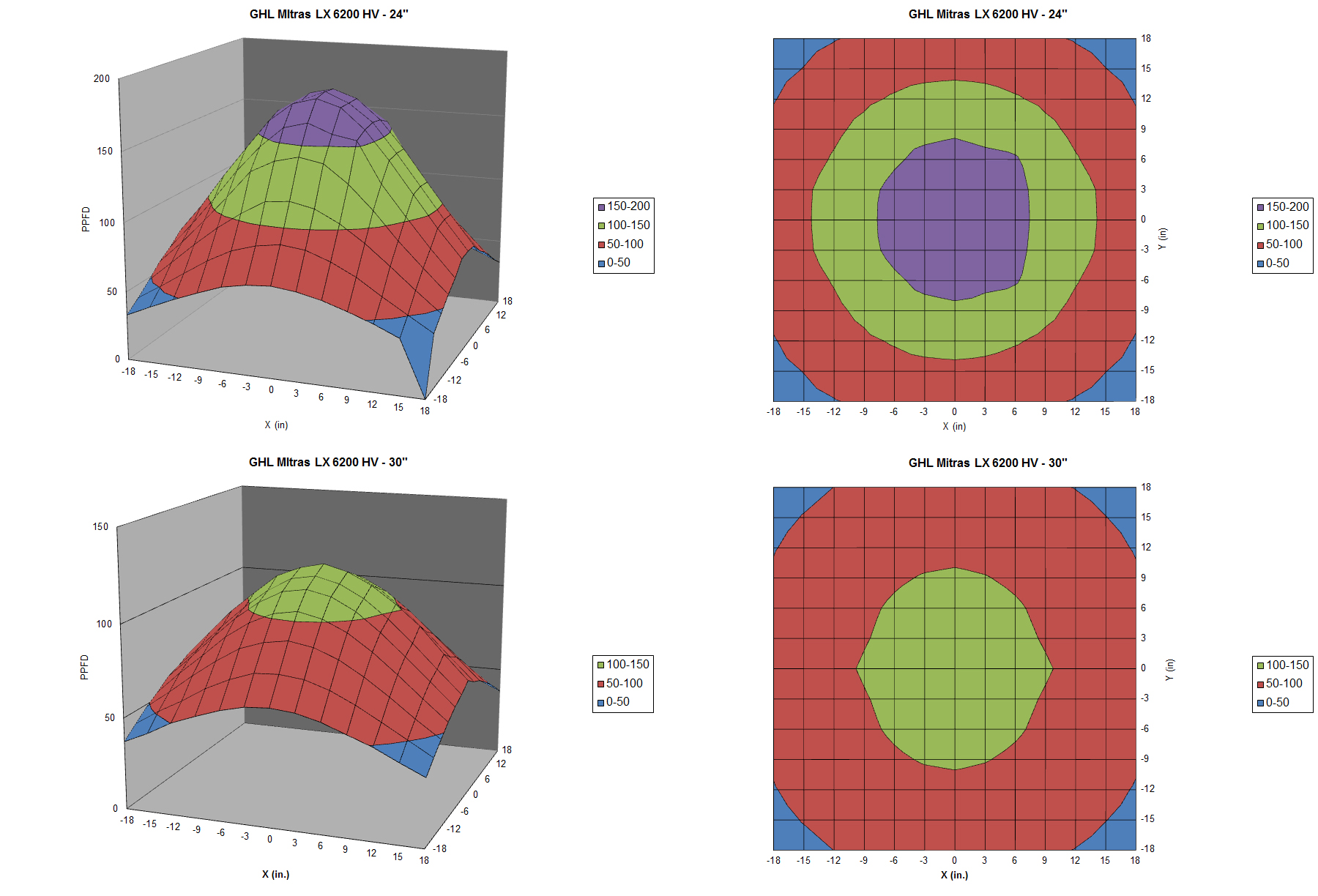 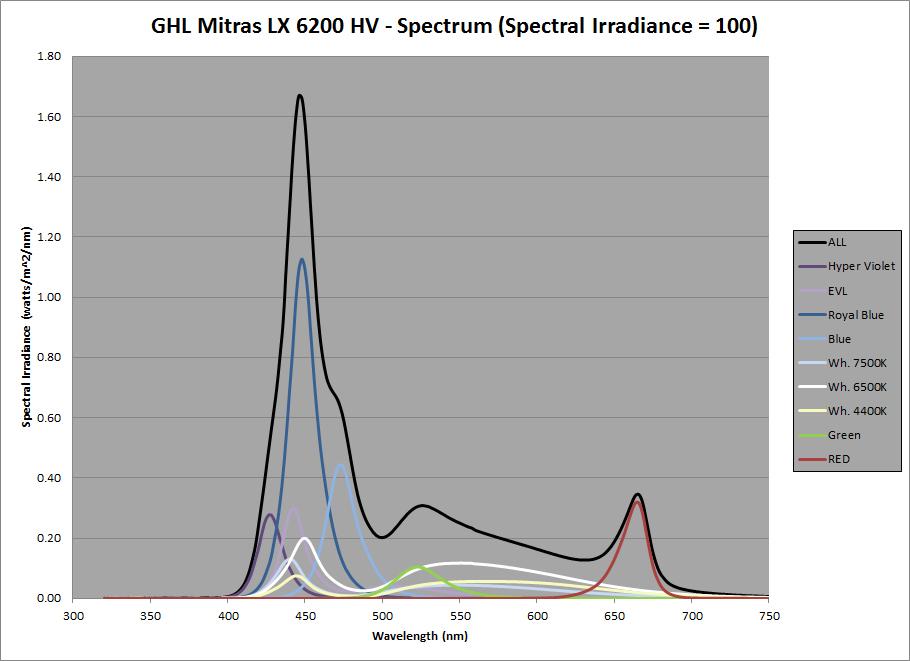 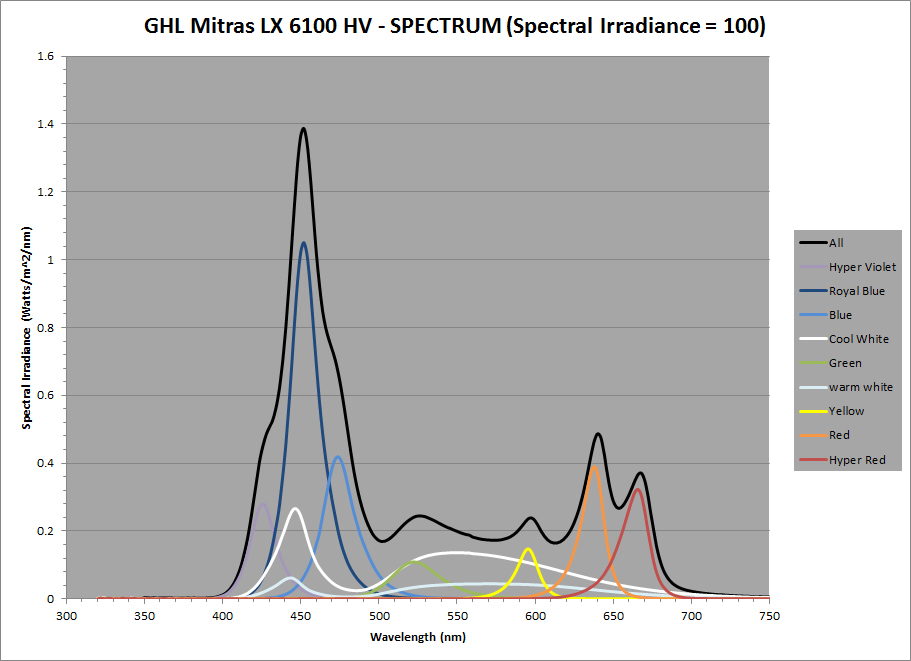 The latest generation of LEDs with their range of multicolor LEDs and multiple channels of control offer unprecedented ability to create a wide range of colors that would suit the aesthetics of the aquarium couple with the requirements of the coral. All of these LEDs are typically programmed through software interface that allows great amount of flexibility in configuring the colors, the ability to ramp the intensity up and down to create effects such as sunrise, sunset, moving cloud covers, lightning simulation, moonlight simulation, and for some even different power settings for high output and high efficiency. 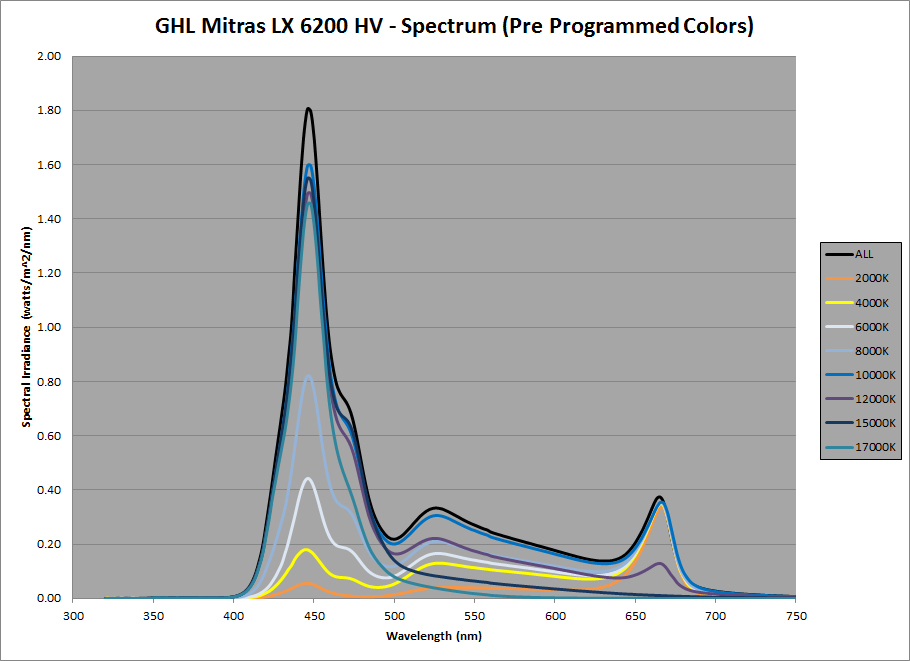 The GHL Mitras also allow the user to pick between 2 operating modes – High output and High efficiency. The difference in the output at these 2 modes is shown in table 4, and Figure 12.

While all of the LED manufacturers provide the power consumption data for the LEDs, the actual power draw as measured by a Kill-A-Watt meter is shown in Table 5. Figure 13, shows the spectral comparison between the different LEDs at maximum output normalized to a spectral irradiance of 100W/m2. Since all of them tend to use the same manufacturer of LEDs, the only major differences are from the composition of the LEDs used. 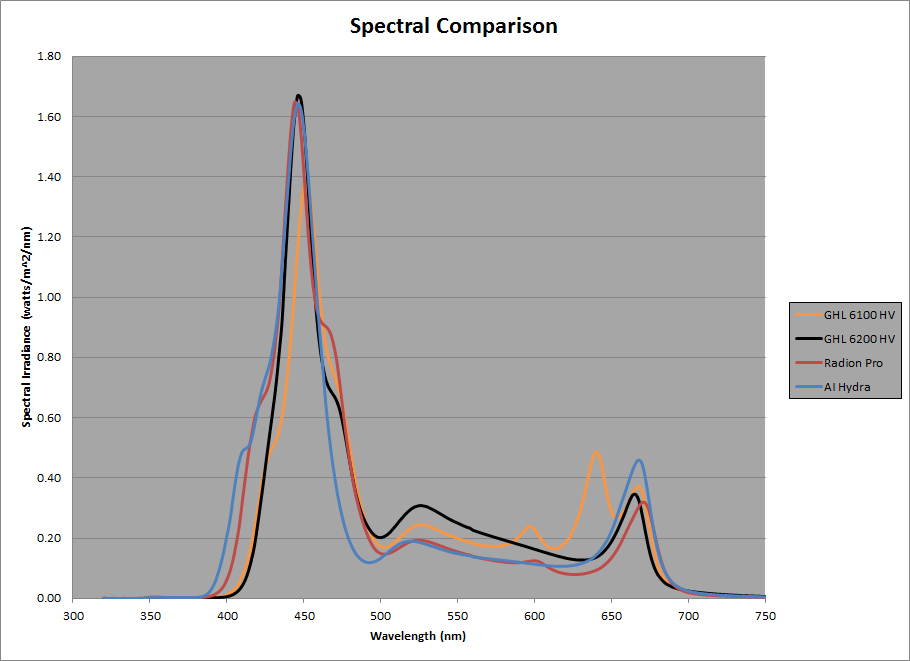 Figure 13. Spectral Comparison of all the LEDs

Comparing the light distribution of these LEDs as shown in Figures 2, 5 and 8 are useful to provide insight into the practical use of these LEDs. At first glance it may seem like AI Hydra does not have the spread or intensity as compared to the other 2. But this is very misleading without considering the power consumption. Since all of these different LED fixtures use almost identical LEDs from Cree and Osram, the main differences in output are directly related to power consumption and numbers of individual and different LEDs and optics. The AI Hydra for example uses only 95W of power as compared to a radion at 171W and GHL 6200HV at 208W. So, in practice you may have to use 2 AI Hydra to get the equivalent light output of the other two. At around ½ the price of a radion Pro, using 2 AI Hydra may be better option for your application. Remember that the light intensity is additive where it overlaps. Running the lights at full output shows that the GHL Mitras has the largest distribution of light and would be suitable for the coverage of about a 3 ft square area, and hence suitable for larger tanks. The radion Pro on the other hand, has a slightly smaller distribution than the GHL, but achieves higher intensity at the same distances. This makes it more suitable for taller tanks, or they can be mounted higher to get a larger spread.

LED lighting has come a long way and the new generation of LED fixtures is delivering on the promise of LED technology, and control features. As usual, the users need to consider their own applications to determine the best one for the situation. Hopefully this data will be helpful in making your decisions.