As said last issue, this month
I’ll explain how I run my system, especially the philosophy behind the
mechanics. There are two focal points: achieving and maintaining a
balance between producers and consumers of waste, and defeating Murphy.
One of the pleasant but problematic aspects of keeping fish for a long
time is that they grow, eat more, and produce more waste. These fish
are the major producers of waste, and strain the system’s ability to
consume this waste without it producing ever higher concentrations of
nutrients like nitrates and phosphates. 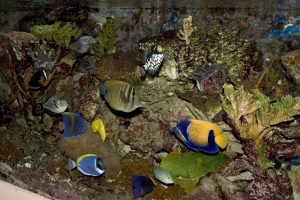 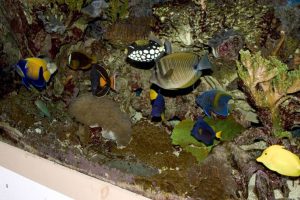 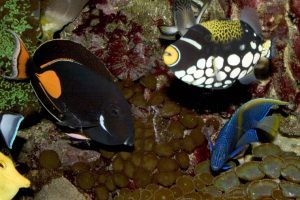 Even though my reef tank has more than 700-gallons of water, given
the biomass it supports when compared to the ocean it is a very small
drop in the proverbial bucket. Therefore, my reef system is very
dependant on electrical power to provide water circulation, gas
exchange, light, heat, waste removal, etc. I doubt if my man made reef
would last more than 6 hours without electricity, and it is here that
Murphy (Murphy’s law – whatever can go wrong, will) is most dangerous.

Only last week, while driving from Cape Cod Massachusetts to
Portland Maine, I received a call on my cell phone that power was out
and not going on for at least 10 hours. Fortunately, I was able to
explain to a friend how to turn on the generator and switch the power
over to it. Without that generator and friend I would have lost my
reef. More later, about my various backup systems, but do recognize
that one can never fully prepare for all of Murphy’s shenanigans.

My 10-foot reef tank is set in a wall, and drains into a 300-gallon Rubbermaid sump in the room behind the tank. 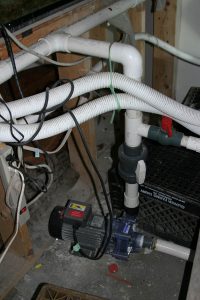 Rubbermaid troughs make ideal sumps – lots of surface area, strong,
inert, and easy to drill — come in various sizes (50-gallon to
300-gallon). The display tank drains into the sump via two overflows,
one on each end of the tank, through four 1-inch bulkheads. The water
in the sump is returned to the tank through a 3-way manifold – the
center return via a 1-inch Sea swirl, and the end ones directly. The
return is driven by a new 3 amp. Sequence Hammerhead pump. I recently
replaced a 12-amp. Jacuzzi high head pump with the Sequence. The
Sequence returns almost as much water as the Jacuzzi (over 4,000-GPH)
and at about one third the power draw, and is saving me about $75.00
dollars/month. This pump runs surprisingly cool, and when I made the
change over the system’s water temperature dropped a degree and 1/2
overnight. Many of our sponsors carry the new Sequence line of pumps. 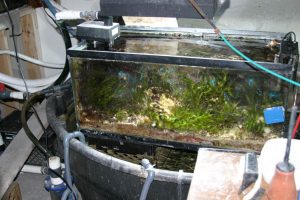 At each ends of the tank I have a TOP 90 external powerhead from
Global Aquarium Supply. The TOP 90 circulates 1426-GPH. Champion
Lighting, one of our sponsors, carries a similar external powerhead
called Hi-Tech, which also comes in various sizes. Champion sells a
mounting bracket for the Hi-Tech pump. These pumps come in various
sizes, and because the head is out of the water they do not heat the
water. The drawback with these pumps is that they do not come with
mounting brackets, but with some ingenuity most aquarists will find
ways to use them. In any case, mine are cycled with the lights. 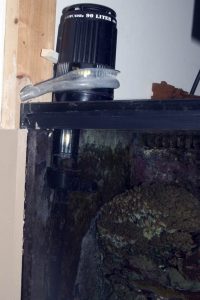 No discussion of circulation would be complete without dealing with
Murphy. Circulation is vital to survival, and the reef keeper must know
what will or can happen if power goes out, or a pump burns out, or if a
pump falls into the water, or if the tank drains back into the sump.
The best way to find out is to turn the power off. Let’s assume that
you have a newly setup reef system, and you turn the power off to see
what happens. The water from the tank drains back into the sump, but
can’t get lower than the top of the overflows and there’s enough room
in the sump. Success! Not so fast, will you have the same success a
year from now, especially when you’re away for a couple of days? I
don’t want to personify Murphy, but he seems to strike at the least
opportune times. 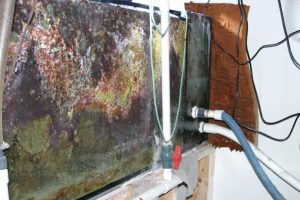 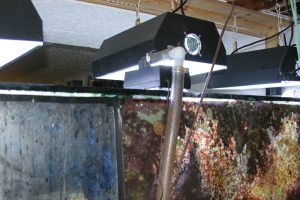 So, what things may have changed over that year? Most aquarists
can’t avoid tinkering, and one way to tinker is to change the location
of the sump return. I once decided to lower the return so that it would
provide more circulation near to the bottom of the tank, not thinking
that if power went out water would drain from that return, now acting
as a siphon, and flood the sump. Fortunately, for me I decided to try
the system and turned the power off. I realized what was happening and
turned the power back on. Okay, now I know what to do, I’ll install a
check valve in the return line so that water can only go into the tank,
not back into the sump. Gotcha Murphy! Not so fast, I haven’t found a
check valve that doesn’t crud up and leak after a while, so unless you
clean your check valves often, they will fail and Murphy wins and you
lose. After messing around with check valves for a couple of years Greg
Schiemer offered me a better solution, and one that costs almost
nothing – drilling a small hole at about the same depth as the
overflow(s) in the return pipe(s). When the water drops to the level of
this hole it sucks in air and breaks the siphon. It is important to
check this hole every couple of months to be sure that it hasn’t been
closed by coralline algae.

Next month I’ll explain filtration and calcium addition to my reef system.