In this issue we offer several especially valuable articles. Firstly, this month’s short take is especially valuable because it illustrates with clear graphs why small water changes are, if not useless, not especially useful. For many, the question of whether to periodically change some water is in itself questionable. Often we hear from experienced aquarists statements like, “I haven’t changed water in X months and everything is still fine.” To my knowledge there isn’t enough scientific study to definitely clarify this question, but mine and other’s anecdotal experience clearly indicates that regular, substantial water changes are an important way to keep a closed system reef tank healthy. In short, change water periodically, and change enough water to make it worth the effort. But, be sure that the make-up water is of higher quality than the water to be replaced, prepare the new water from RO/DI freshwater or the equivalent with a quality artificial
salt, and be sure that the make-up water is of the same temperature, pH, and salinity as the water to be replaced. Not following these details may unnecessarily stress the established animals, and as many of our authors have pointed out, stress weakens our captive animal’s immune systems. 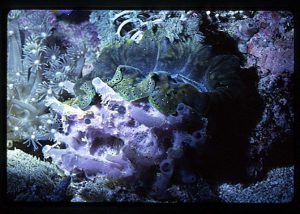 Charles Delbeek, one of our media columnists, reports in detail one scientific study which makes it clear that when the scleractinian coral Stylophora pistillata is fed, apart from what they it gets from its symbiotic algae (zooxanthellae) it grew faster with a denser skeleton.

We have reached a place in our hobby where many of the challenges of the past have been solved, but for those of us who like challenges, there are still plenty. Keeping in captivity invertebrates that are not partially fed by their symbiotic algae and must get all of their nutrition by capture and filter- feeding we are beginning to have success in feeding some of these. Sponges are beautiful and fascinating, but few if any of us have had long term success in keeping some of the most beautiful sponges. Who wouldn’t want to have one of the barrel sponges photographed by Greg Schiemer, pictures of which are in Rob Toonen’s column? In his first paragraph Rob says:

“I think that there are really two primary reasons for the unfortunate failure of most hobbyists with sponges in their aquaria. The first reason is that most collectors and hobbyists are ignorant of sponge biology, and do not realize that removing most reef sponges from the water, even for several seconds, will kill them (I will explain this in more detail below). Second, very little is known about sponges even within the scientific community, and their physical tolerances and husbandry requirements remain as much a mystery to marine biologists as they are to reefkeepers.”

Sponges are quite a challenge. The photo with this editorial was taken by me 15 years ago – it shows its age – and shows a lavender sponge attached to the side of a Tridacna gigas. The sponge came from somewhere and after growing rapidly for several weeks disappeared. The sea world still withholds many of its secrets.