About two weeks after coming back from New Zealand – an
absolutely beautiful country – I moved my reef animals from
Cape Cod to Portland Maine. As most of you know, I had been
preparing for this move for many months. I anticipated that it
would be traumatic both for me and my reef guests, and it was. So
far the only casualty is my T. crocea, which is not a
surprise as established clams do not take to relocation well. The
boss of the tank, my Acanthurus sohal is badly wounded,
undoubtedly by beating him or herself up against the walls of the
5-gallon bucket I transported the tang in. Evidently, though many
fish remain calm in plastic buckets, some don’t and
transporting those should be in a plastic bag, which would
minimize the damage that they can inflict on themselves. 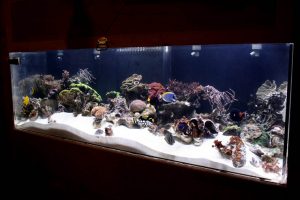 All of the other fish are fine, even though having to make a
short stop toppled over a bucket spilling two fish onto the floor
of the vehicle. Fortunately, I had a siphon hose with me and
transferred some water from one of the other vats to the empty
one, then returned the fish that don’t seem any worse off
from the spill.

In order to get the fish out of the 10-foot reef tank required
that I first remove all of the coral. This was hard work as much
of the coral had grown into the sides of the tank and into one
another. With the help of one of my sons I got it all out and
into waiting vats, the type used to store clothes. One thing to
note here is that these vats have lids that don’t seal, and
unless you tape them down will spill seawater when the vehicles
stops short, goes up or down a steep hill, or even when you make
a sharp turn. By the time we got up to Portland the Minivan
smelled like the proverbial creek at low tide.

With the coral out of the tank it was possible to catch the
fish; however, removing the coral released so much detritus into
the water column that it was impossible to see into the tank. The
only reason I was able to catch most of the fish was that the
fish couldn’t see either. I was not able to catch my
20-year old yellow tang (Zebrasoma flavescens) and my
A. frenatus who will celebrate her 24th
birthday with me this October – is this a record for a reef
fish in captivity? I drove back the next day to transport them; I
guess only reef keepers understand that this is not some form of
mental disorder – driving 500-miles for two little
fish.

I just interrupted writing this editorial to feed the fish.
I’m happy to report that all of the fish are eating, but
unhappy to report that Cryptocaryon irritans has already
made its appearance. I’m sure that some of you along with
me are wondering when the parasites came from. There hasn’t
been a sign of it in my reef for at least 4 years. My guess,
based a lot of anecdotal evidence is that once present in a
closed system is always present to some degree, and kept in check
by the fish’s immune system. A move like this stresses fish
badly, and stress leads to an impaired immune system. At least
for the present I don’t plan on doing anything other than
make the environmental conditions as beneficial to the
fish’s immune system as is possible. 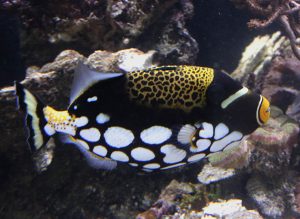 The clown trigger was completely
unperturbed by the move.

With my editorial are some pictures of the new tank, along
with associated equipment. The picture in the sump room shows
that I’m using my old ETS skimmer driven with an Iwaki
70-RLT and my new ASM G6. Between the two skimmers I skim at
least 3000-gallons hourly. Over the years my fish have grown so
large that if I’m going to keep the water nutrient free I
need all the help both skimmers can provide. The trick to a
successful closed system reef tank is maintaining a balance
between the producers and consumers of waste. My clown trigger
pictured here, no longer a juvenile, was completely unperturbed
by the move. 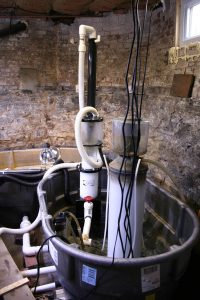 An old ETS skimmer and new ASM G6
skimmer are being used to skim the tank.