I received this email a few days ago from Joe Yaiullo, one of the pioneers of reef keeping in the USA. Joe established and maintained a 200 gallon reef tank in the basement of the New York Aquarium, at a time when most people believed it impossible to keep stony corals alive in captivity. Eventually he convinced his bosses that reef keeping, as we know it today, was possible, and he was allowed to create New York Aquarium’s large reef tank in one of their display halls. Today, Joe is the director of the privately owned Atlantic Aquarium, with its 20,000 gallon reef tank.

I was up at Greg’s [ Greg Schiemer’s ] yesterday and while he used a hammer to get me some frags, he told me that recently he got rid of his algae refugium and he said you had mixed feelings about yours… what is your latest take on them? Joe

So far for me the benefits out weigh the negatives, which is the unwanted growth of hair algae in a display tank that never had a hair algae problem before the establishment of my algae refugium. The benefits of the algae refugium is incredible coral growth, especially in a tank with big fish that are heavily fed. The unanswered question is whether it’s the algae putting something in the water to benefit itself or the chelated iron added to help stimulate algae growth that is responsible for the unwanted algae.

To continue the discussion I have been having with both Joe Yaiullo and Greg Schiemer on the subject of macro-algae refugiums I want to emphasize that in terms of coral health my refugium appears to be a great boon. I say appears, because it is usually impossible to establish a clear, simple cause and effect relationship in something as complex as a reef tank. For example, not too long ago many of my corals were showing signs of distress, and some of the distressed corals I speak of, I’ve had for 15 years. Searching for answers I discovered that my orthophosphate (PO4) level was too high (0.6mg/L) and my specific gravity has risen much too high (1.031). I corrected these problems and the corals rapidly showed signs of returning to health. However, several months after these corrections I established my macro-algae filter, and as the algae flourished the coral growth in my display tank accelerated. Furthermore, to help the growing macro-algae in the refugium I began to dose chelated iron. Thinking about all of this it is clear that finding a simple causal relationship between the obvious, growing health of my corals and the establishment of my macro-algae refugium is not possible. In other words, the refugium is but one variable among several – mentioned above — that I’m aware of, to say nothing of variables that I may be unaware of. 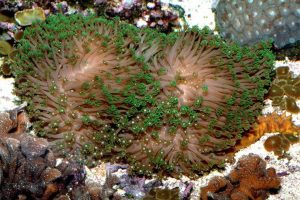 As mentioned earlier there may be a downside to macro-algae-filter refugiums – unwanted hair algae in the display reef tank where there was none before. So far for me at least the benefits, if in fact it is the macro-algae plus chelated iron supplementation that is at least in part responsible for the health of my corals, appear worth while. I have discussed this with a number of advanced reef keepers already, and their experience is comparable. What I’m trying to see at this time is if I eliminate the iron supplementation variable whether the hair algae will die back.

I stopped dosing chelated iron several weeks ago and have observed the following: the hair algae in the display tank has neither increased nor decreased. At the same time certain species of macro-algae in the refugium have all but disappeared (Caulerpa mexicana, C. sertularioides, and Chaetomorpha crassa), but has been replaced by Caulerpa prolifera, which is still flourishing. What has grown to some degree in the display tank is Bryopsis plumosa. My six surgeonfish seem uninterested in the Bryopsis, but will make short work of any of the macro-algae I harvest and throw into the display tank.

Please keep in mind that these are anecdotal observations on my part and maybe completely wrong, which is the problem with anecdotal observations. Nevertheless, in the absence of scientific data all we can look for is trends. I hope that other reef keepers who are experimenting with macro-algae filters and or iron supplementation will communicate their observations with us. Please do so at the “Writer’s Forum”, at http://reefs.org/phpBB2/viewforum.php?f=38.

In this issue of Advanced Aquarist, Julian Sprung returns to a topic very near and dear to his heart: Goniopora and Alveopora husbandry. Though his observations are still in the anecdotal stage, it is important to recognize that all anecdotal observations are not equal – an experienced aquarist and biologist is apt to see further into a situation than an amateur. Interesting too, is that Julian’s experience with these corals, commonly called flower pot corals, is consistent with an Alveopora sp. that I have had now for several years. During that time it has flourished sitting on the substrate. In fact, in a previous editorial I mentioned that that might be a requirement for this coral. When you read Julian’s column you will see that he suggests that dosing of certain metals may be required for flower pot corals to remain healthy in a reef tank. What I have observed, after dosing chelated iron to benefit my macro-algae, is that my Alveopora went into a growth spurt. Is this simple causal relationship true, I don’t know? See the photograph here, and note what Julian had to say when I showed him the photograph and asked about the white star-like centers:

The white parts at the centers are what are referred to as the oral cones. This is the part of the oral disc surrounding the mouth, and it is typically elevated into a cone shape. The photo also shows many small immature polyps at the bases of the larger polyps- a sign that this specimen is growing rapidly.

When it comes to Goniopora spp. and Alveopora spp. husbandry don’t assume that all the solutions to their captive reef husbandry have been found, and it’s alright to run out and buy one; instead, recognize that it is a work in progress, and that we cannot be sure yet what it takes to care successfully for these beautiful corals. However, I do hope that experienced reef keepers will use this and other information to see if we are on the right track, and report their experience for all of us to share.