I‘m at it again, and it’s one of those things that reef
keepers hate the most; I’m preparing to move a large reef
tank’s inhabitants from one state to another. In this case from
Cape Cod Massachusetts, to Portland Maine. The last time I
moved my animals was in 1998, then from NYC to Cape Cod. As
most of you know, my animals currently are in a 10-foot glass
tank, and have grown quite large. In fact, some of the coral
heads will have to be broken to get them out of the old tank.
The new tank will only be 8-feet long, but is higher and
longer, and made out of acrylic. It was in fact the largest
tank I could get down the stairs into the basement, and again I
will use a 300-gallon Rubbermaid fiberglass, livestock feeding
trough for the sump. The final volume of water will be the same
— around 800-gallons.

I briefly contemplated giving all of the animals away and
starting from scratch, but realized almost immediately that I
couldn’t. Many of the corals and fish have been with me for
better than 20-years, and my Amphiprion frenatus for
almost 24-years. As the saying goes, ‘we are family.’ So, I
find myself confronted with a number of husbandry issues, and
thought I ask our readers for some feedback.

First, however, the new tank. The tank was the largest I
could get down the cellar stairs, and even then I had to cut
away some ceiling and modify the stairway — what we do for our
animals. A glass tank would have been my first choice, but I
could not find anyone to build a large glass tank on location,
and a premade glass tank of this size would be impossible to
move. My concern about the acrylic tank — made beautifully by
Precision Acrylics — is how to keep from scratching it
when removing the inevitable coralline algae, which as we all
know loves to grow on plastic. I’m very open to advice from
those of you with experience with acrylic tanks. I already know
to be very careful. 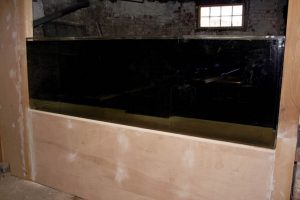 The new tank is located in the basement, where I’m
in the process of building a wall around it; behind it will be
the 300-gallon sump and associated equipment.

A more complicated and controversial question is substrate.
First, either to use a simple dusting on the bottom of the tank
just for appearances, or what is the generally approved method
of using a fine sand bed of 2 to 6-inches deep with a plenum.
Whether a fine sand bed and plenum actually helps to reduce
acuminating nitrates is a matter of some controversy. See Rob
Toonen’s features regarding this. Also, there appears to be
some anecdotal evidence that over a period of several years
deep sand beds may contribute to what has been called the “old
tank syndrome.” What do you think?

Incidentally, in then near future we will publish a feature
by Julian Sprung on this subject. And, also incidentally,
Sprung’s and Delbeek’s volume 3 of their much lauded The
Reef Aquarium series is now available. Many of us have been
waiting for this publishing event. I have already thumbed
through the new addition, and it is well worth the money.