As you can see from the pictures, I’ve made good progress
setting up my new home for my reef animals. The first photo shows
the tank, filled with water and oolitic sand, now set into a wall
that I built. The next thing that I have to do is to paint the
wood. I haven’t decided on a color yet, but I’m leaning
toward flat black, which would allow the wall to disappear.
I’m certainly open to suggestions about this. The other photo
here shows the lid open. 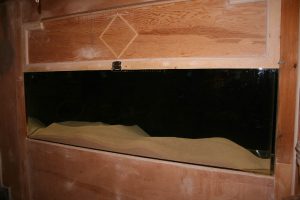 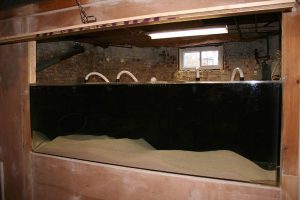 The next set of photos depicts the system’s water
circulation system, which to me is the most critical, at least in
the sense that it must be as free from break down as possible.
The animals can live without light, food, and even relatively
poor water conditions for a few days, but without adequate water
circulation the animals will begin to die within hours – oxygen
will soon be depleted, carbon dioxide will increase and a general
system meltdown will occur. It is for this reason that I try to
make the water circulation apparatus as fool proof as possible.
And, knowing Murphy (Murphy’s Law – whatever can go wrong
will.) from years of experience, I always have a backup pump, and
have created plumbing that will allow me or someone else to
exchange the main circulation pump within a few minutes. Looking
at the photograph, you will notice that the Sequence HammerHead
pump is isolated by two, 1.5-inch Haywood true union valves, one
on the input and the other on the output of the pump. This way, I
can shut off the water on both sides of the pump and remove the
pump and replace it with another. Furthermore, it is best to make
sure that the backup pump has the same length input and output
pipe as the other; doing this makes the switch easy. 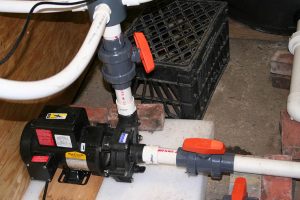 As I pointed out last issue, I’m using OceanMotion’s 4
way device, with a 1.5-inch pipe coming from the HammerHead pump
to 4, 1-inch returns. From the OceanMotion’s device the
returns to the tank utilize flexible 1-inch PVC. I chose the
flexible PVC because it allows me to avoid 90-degree elbows,
which would put some back pressure on the circulation pump. The
HammerHead pump moves a great deal of water, over 5,000-GPH, but
doesn’t handle back pressure as well as a Jacuzzi type pump,
but uses about a 1/3 the watts and doesn’t heat the water as
much as a high speed pressure pump. So, my goal was to put as
little back pressure on the HammerHead as possible. I was so
successful, in fact, that the OceanMotion’s device clicked
instead of cycling, forcing me to back off on some flow with one
of the valves on the Haywood. 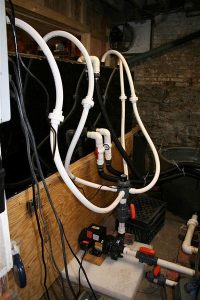 One caveat, Dr. Bingman, in a personal conversation, cautioned
me that flexible PVC is more toxic than rigid PVC, and that he
and others have observed that fauna doesn’t grow over time on
the inside walls of flexible and well as it does on rigid PVC. He
also suggested, therefore, that I use activated carbon on a
regular basis, which I do. Another caveat about activated carbon:
Dr. Bingman years ago in an a very important article in
Aquarium Frontiers demonstrated that activated carbon,
when used in a reef tank where the water had discolored, allowed
much more light, especially UV to hit the corals. This frequently
caused bleaching, because the corals didn’t have time to
develop their natural “sun screen.” The obvious
solution is to use carbon on a regular basis, or not at all.
However, IMO, because carbon is so useful it should be used, but
changed regularly.

You will notice from the picture to come that I use 2,
150-gallon Rubbermaid “stock tanks” for sumps.
Rubbermaid makes a 300-gallon tank, but I could not get it into
my basement, so I connected 2, 150s with a 2-inch PVC pipe. These
“stock tank” make excellent sumps – they have a large
surface area, are easy to drill, and are strong and inexpensive.
Still another caveat, they all come with their own bulkhead,
which should be replaced or cemented over from the inside — in
my experience and others they tend to leak. 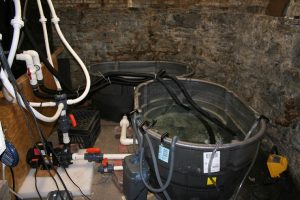 Building and setting up my new reef tank has been fun, but
moving my animals will be as traumatic for them as it will be for
me. This is still months away.