I have been writing and answering questions about keeping both large and pigmy angelfish in reef tanks for at least 10 years, and it is a topic that continues to interest reef keepers. During that period I have kept quite a selection in my reef tanks, and furthermore have been in contact with other reef keepers who have shared their experience with me concerning the advisability of keeping angelfish in reef tanks. The short answer to this question is that if you are unwilling to take any chance that an angelfish will eat one of more of your invertebrates than keep them out of your reef tank. If you are more adventuresome, as I am, then read on.

Currently, in my 10-foot reef tank I have two angelfish: an adult Pomacanthus navarchus, and one adult Centropyge loricula. The P. navarchus was purchased as a juvenile and, over the last 10 years, has grown to about 8 inches and has adult coloration. The C. loricula has only been with me for about two years. Both angelfish will on occasion pick at SPS corals (small polyp scleractinian), but I have never observed either doing any damage to these SPS corals. Neither works for long at a specific section of an SPS coral, which is evidently why no damage is done. In my experience and those reef keepers that I know of this behavior is typical of almost all angelfish in captive reef systems. I don’t know of an angelfish that has done serious damage to an SPS coral.

However, when it comes to LPS (large polyp scleractinian) corals unfortunately the situation is quite different. Some corals with large fleshy polyps – Turbinaria spp., Trachyphyllia spp., Wellsophyllia spp. Cynarina spp, etc. – are often targeted by large angelfish. These corals will try to protect themselves by withdrawing as much of their tissue into their skeletons as possible, but many large angelfish will work at them until they are destroyed or seriously damaged. It should be noted that there are many LPS corals whose taste and or nematocysts are disagreeable enough that they are left alone by large angelfish. I am not familiar with one instance where an angelfish of any size went after a Catalaphyllia jardinei or any Euphyllia spp. However, it is important to note that one can never predict what a specific fish may or may not do. 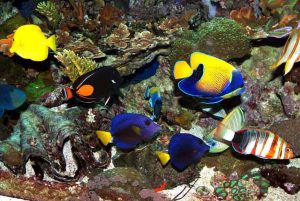 This photo taken in the author’s reef tank in July of this year shows many of the tank’s fish, including Pomacanthus navarchus, assembling near the feeding area. 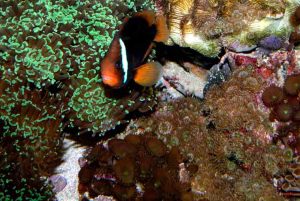 A. frenatus guarding its home (a E. ancora) and inadvertently protecting a small patch of Anemonia magano from my P. navarchus.

When it comes to soft corals and anemones we are pretty much in the same boat. Many soft corals like Zenia spp. appear to be regarded as delicacies by many large angelfish and even to some of the pygmy angelfish. If your reef tank is dominated by soft corals keep angelfish out of it. However, there are many soft corals that are too poisoness to taste good to angelfish: virtually all of the larger members of the subclass Corallimorpharia – Discosoma spp., Palythoa spp., Rhodactis spp. – are avoided by angelfish. On the other hand, smaller anemones are often eaten by at least the larger angelfish – Aiptasia spp. and Anemonia spp. for example. Like some of the butterfly fish, some large angelfish will eat these smaller anemones, much to the delight of reef keepers. Left unchecked the two just mentioned small anemones can over-grow a reef tank, forcing its owner to break it down and to start all over — not a pleasant prospect.
Aiptasia spp. can easily be eliminated with shrimp, nudibranchs, or butterfly fish that prey on them. However, eliminating Anemonia spp. is much more difficult. With this fast growing anemone the reef keeper has to rely, at least at present, on certain fish to feed on them. I should note here that they can be removed manually by injecting them with hot Kalkwasser or acid, but this is only if you have a few. The problem is that the fish (raccoon butterfly fish and certain large angelfish) that prey on them will also prey on animals that reef keeper’s prize.

As can be seen from the photograph, in my ten foot reef tank I have a small patch of the nuisance Anemonia. The patch is in front of my 17 year old Euphyllia ancora, which has grown from a small fragment to an animal that is 24 by 23 inches in size. Many years ago, after the E. ancora was added to an older reef tank – my first — my now 19 year old Amphiprion frenatus made it her home. From that time on, in true anemonefish fashion, it has protected its home from all comers. In my current tank there is not one Anemonia sp. anywhere accept that small patch. My P. navarchus eats any it can get at. So, the patch is protected by the anemonefish. In fact, my old crusty A. frenatus, once took a sizable chunk out of my angelfish’s tail when it got too close.

Years ago I had a P.asfur in a reef tank with a large colony of X_enia_ spp., which for over a year it did not go near. Suddenly, it developed a taste for Xenia, and wiped out the colony in a few days. With large angelfish in a reef tank you are taking a chance. I would, however, suggest that to my knowledge the regal angelfish (_Pygoplites diacanthus_), kept by a number of aquarists in reef tanks has so far worked out well. Nevertheless, ounce again, one can never completely predict the behavior of any individual fish.

Perhaps the safest group of angelfish for the reef tank is Genicanthus spp. These angelfish are generally planktivores, but even here I know of one male Genicanthus lamarck that went after SPS corals. The so-called pygmy angelfish (_Centropyge_ spp.) are kept in many reef tanks, but not always with the best results. Although they rarely bother corals enough to damage them seriously, some individuals will pick at the mantel of Tridacna spp. clams, causing the clam to close, which can lead to its death, if the fish is persistent enough.

“I’ve tried 14 distinct species of Centropyge, and none of them were 100% reef safe. And for what it’s worth, they are more often then not impossible to catch once introduced. So the bottom line is I wouldn’t again. (I am rather stubborn and stupid; it would seem that 14 attempts are enough to learn a lesson!)”

Despite this reef keeper’s experience I currently have one P. Navarchus and one Centropyge loricula. The pygmy angelfish has not bothered anything, including my clams, and the navarchus is more of a help than a nuisance, but I cannot keep certain fleshy corals in with it. For me, this is an acceptable trade-off. The P. navarchus is a beautiful fish.

One of the most gratifying developments which has come with the publication of our Advanced Aquarist online magazine is the interest it has engendered in countries outside of the United States. The international sharing of information, leading to an international community of aquarists, is one of the hopeful things brought about by the internet. The sharing of humankind’s fascination and caring for living things on our planet can only bring positive results. This month’s Featured Aquarium is a case in point.