The editorial this month will serve more as a warning than as
a traditional editorial. This past weekend I spent time with some
friends on a small island in Northern Vermont, and the topic of
discussion turned to family tragedies. One such tragedy was the
death of two small children due to smoke inhalation. The cause
was an electrical short that caused a smoldering fire.
Unfortunately, this is a too common of an occurrence. We read about fires
caused by electrical wiring problems all too often.

In my opinion, as reef keepers, we are especially vulnerable
to potential wiring problems. Maintaining a reef tank usually
requires the extensive use of electrical connections, which often
have to carry a lot of juice. But, far more problematical is the
high humidity due to evaporation in and around the electrical
connections. For example, not long ago I smelled the tell tale
smell of electrical smoke in my house. Upon investigation, I
found that the smell came from the room were I kept my reef
maintenance equipment. Investigating further, I discovered that
the plug from my Jacuzzi circulating pump- which draws 11 amps –
was literally black and melting from the heat. This connection
had been trouble free for at least two years. Apparently, over
time, the plug connection with the socket became wet enough due
the room’s humidity to arc and overheat.

My Jacuzzi was on a separate 20-amp line and one would have
thought that the developing short would have tripped the circuit
breaker, and eventually it would have, but not before smoke and
fire. I’m of the opinion that we have too much faith in regular
circuit breakers. I’m not suggesting that we eliminate them, but
that we practice excellent wiring practices also, and that
whenever possible we use GFIs. Ground Fault Interrupts are very
sensitive to moisture and provide much greater protection than
ordinary breakers or fuses. 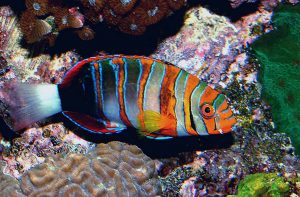 This tuskfish has been with me for better than 10-years. It
grew from a juvenile to adult during those years, losing its
false eye spots in its dorsal fin.

However, because GFIs are so sensitive many aquarists stop
using them. Too often an aquarist comes home only to find that a
GFI connecting a vital piece of equipment has tripped, with the
result that the lack of gas exchange is seriously threatening the
survival of his or her animals. Furthermore, some GFIs do not
reset themselves when there is a power outage. The answer is not
to eliminate GFIs, but to practice good wiring procedures. Do
things like hard wire whenever possible and find ways to prevent
humidity and splashed water from reaching electrical connections.
If you do not understand how to accomplish this hire a qualified
electrician to do your wiring! It might save your life or that of
your loved ones.