As aquarists we cheerfully feed our fish and invertebrates. We obsessively monitor their behavior and health, and adjust the parameters of their tiny environments as required. And we add and subtract chemicals by various methods so as to refine their water quality. As a result, our aquarium paraphernalia multiplies exponentially, like symbiotic bacteria. Evidence of this is in the observation that the meetings of most aquarium societies are also garage sales. This article is an intervention of sorts, at least when it comes to simplifying one key aspect of the marine aquarium hobby – salinity (or specific gravity) testing.

The cheapest and most common piece of equipment for testing specific gravity and, for determining salinity, is the plastic hydrometer. For those with a greater scientific inclination it is the buoying and bobbing, glass hydrometer. For those who dig the most modernity and coolness, it is the light utilizing refractometer. But each of these tools suffers from the same drawback of being able to perform only a single function; they only have one purpose, and they take up space when they are not performing it. So, the question is, wouldn’t a multipurpose gadget be more preferable in a hobby that is so often fraught with clutter? 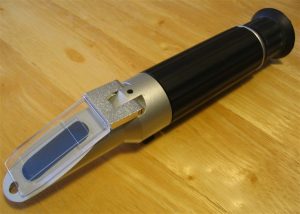 This used, lab grade refractometer was found on an auction website for about $40. A salinity refractometer works on the principle that the degree of light refraction increases with liquid density, i.e., the denser the water, or the more dissolved solids it contains, the more it bends the light that passes through it. A prism, with a thin film of water on its surface, provides a mechanism for observing and measuring this refraction.

An electronic conductivity meter is just such a gadget. Not only can one be utilized to determine salinity, but it can also be applied to testing freshwater sources such as municipal tap water, well water, rainwater, and RO/DI water. After all, a significant percentage of marine aquarium enthusiasts also have experience in the freshwater hobby, in which a conductivity meter is a valuable measuring tool for matching or manipulating a water source to the needs of delicate fish species.

Consider also the unstable nature of an aquarium’s water chemistry. Without the aid of protein skimming or water changes, a marine tank readily accumulates metabolic waste products: Nitrogen compounds, carbon dioxide, phosphates, sulfates, etc. (Some compounds such as carbohydrates –basic sugars– add to conductivity only after they’ve been metabolized). So, either uneaten food is broken down, is mineralized into electrolytes, adding directly to conductivity, or the through the metabolic processes of a tank’s animal inhabitants, it is transformed into conductive waste products. The other source of electrolytes is, of course, the addition and subtraction of salts and aquarium additives. (Evaporation itself doesn’t add any more electrolytes; it simply concentrates them per volume of water, thus increasing conductivity). For a basic list of electrolytes, see Table 1.

Freshwater fishes live in water that is of a lesser ionic concentration than the cells in their bodies; they are hypertonic compared to the water. So, in effect, they live under osmotic pressure and are constantly gaining water, which they must expel in the form of dilute waste. They are also continually losing salts, which they must conserve through processes in their kidneys and gills. Freshwater fishes thus have little need to actually drink water; it’s literally forced into their bodies. (Osmostic pressure is the result of molecular movement and a differential in ion concentrations. Molecules move from an area of higher concentration to one of lower concentration. This is called Brownian motion, and it’s evident in a room in which a match has just been lit; the smoke quickly disperses to fill the space.) 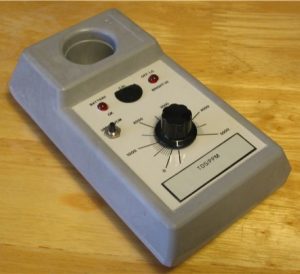 This rugged and easy to use TDS meter has a range of 0-5000 ppm (parts per million), and operates on a single 9-volt battery. A small well holds the water sample, about 5ml. Lacking an analog or a digital display, the measurement is made by holding a button down and adjusting a dial along a graduated scale until an LED illuminates. A switch on the base changes between three range multipliers: 1, 0.1, and .01, in effect, making the meter’s effective ranges 0-5000, 0-500, and 0-50, respectively.

Marine fish live under the opposite conditions, in water that is of a greater ionic concentration than the cells in their bodies; they’re hypotonic compared to the water. So, they are constantly losing water through osmosis and conserving salts. To counter the loss of water and conservation of salts, they take in water and expel concentrated waste to rid themselves of excess ions. (All but a few species –salmon, eels, one of two of the sharks-amazingly have the ability to survive in, and cross between, both fresh and saltwater environments.)

So, as we can see, dissolved solids play a vital role in the general physiology of fish. Too low or too high a level can have a deleterious effect on growth and overall health, e.g., dissolved calcium is utilized in bone building in fish, and developing fish eggs exchange ions across their permeable membranes. An ionic imbalance in the former case could lead to a developmental disorder, and in the latter case an egg that will fail to hatch. (The necessity for a continuous supply of electrolytes can be observed in the behavior of male Clownfish when they meticulously tend their female’s eggs by cleaning and fanning them.)

A proper explanation of the concept of conductivity is probably best left to the experts. The manufacturer of the conductivity meter in picture #3 presents the following glossary definition on its website:

Conductivity meters are such simple devices – two electrodes powered through a circuit -that numerous companies manufacture them. Their cost is also affordable for those serious aquarists who are also willing to fork out for other types of monitoring equipment like pH testers. For the purpose of marine aquariums, it is the testing range of a meter that is important. Generally, a meter measures in µmhos (micromhos), – equivalent to µS (microSiemens) which is used in Europe – or parts per million (ppm) of total dissolved solids in the case of TDS meters. But the two different units are easily converted into one another. (Multiply micromhos by 0.7 to convert to ppm.) 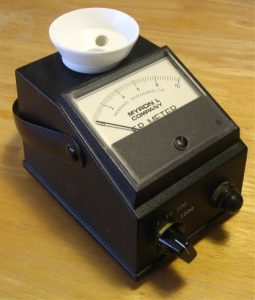 Another handheld conductivity meter with the well design. Two separated electrodes are embedded in the well. The liquid being tested acts as the conductor and competes the circuit. This meter has an overall range of 0-10,000 µS (microSiemens), which are equivalent to µmhos (micromhos). It was also purchased on an auction site for about $40.

Commercially available conductivity meters test in a wide range, starting in the low range of 0 – 10 µmhos, to the high range of 100 – 200,000 µmhos. For the purposes of marine aquariums, however, this poses a slight problem. Seawater has an average density of about 1.027 gm/cm3, fluctuating around the world from about 1.020 gm/cm3 to 1.029 gm/cm3. This converts to a conductivity of 35,000 ppm or 50,000 µmhos. So, it would seem only logical to use a meter that has a high range, greater than what is found in marine waters, such as 100,000 µmhos. But as we shall see, this is not necessarily the case. To avoid having to purchase an expensive high range meter or monitor, we can instead make a small compromise in our testing method.

If your conductivity meter doesn’t measure within an appropriate range for a marine aquarium, it doesn’t mean you’re unable to perform a test. If you carefully dilute the tank water sample to be tested with freshwater – with RO water, distilled water, or low conductivity tap water – you can make a measurement. For example, if we have a conductivity meter with a range limit of 10,000 µmhos, we can mix 1 part tank water with 3 parts freshwater, thus placing the resulting mixture within the range of the meter. To determine the actual conductivity, we simply multiply the meter’s reading by 4. 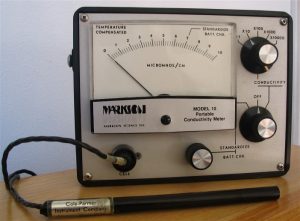 This high-range conductivity meter measures up to 100,000 µmhos, with its lowest range setting being 0-10 µmhos (micromhos). It requires a special probe and calibration, and a bank of 8 AA batteries to operate. But it is effective at both determining the salinity of a sample of diluted saltwater and the efficiency of a RO/ DI filter system.

One drawback with using a conductivity meter is that it requires periodic calibration. But there’s no need to waste money on purchasing – and throwing away – a laboratory grade, standardized calibration solution. (For the best results, distilled or RO water –with a near zero reading– should not be used here because the meter will be used to test high-conductivity marine water. Ideally the calibration solution should be close to the same level as the water being tested.) By bottling a sample of seawater that is already known to have the proper salinity and to be within the proper salinity range for the tanks’ animals, this problem can be easily solved. You can prepare a standardized solution for calibration use by weighing 4.7 ounces of salt mix and dissolving it in a gallon of freshwater. (Some salt brands have slightly higher moisture contents than others, so take this into account when mixing.)

At this point you may still be wondering what the point is of fussing about with electronic meters and diluted salt solutions, when refractometers are so readily available. My response to that would be, saving money and taking pleasure in one’s hobby. A refractometer is a solid device with which little can go wrong, but, like a garlic press, it only performs a single function. The rest of the time it’s a paperweight taking up space. A conductivity meter, on the other hand, is capable of testing and monitoring tank water, reverse osmosis source water, and municipal tap water. And while I don’t get a great deal of pleasure out of performing water changes on my aquarium, I do always gain some gratification in playing scientist with my conductivity meter… and in feeding my tank’s inhabitants, of course.