My third reef tank, “My Chunk of the Ocean” was started in 1999.  The tank is an Oceanic Reef Ready 180 gallon system (72”x24”x24”) on a white washed solid oak stand with a 55 gallon acrylic sump.  The entire setup is located in my dining room, which helps keeps my guests busy and provides endless hours of conversation. 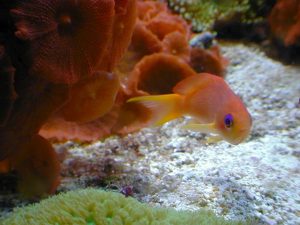 The display has about 220 lbs of live rock and about 200 lbs of sand.  This is not a tank with rocks piled up to the water surface.  It was designed to have open water swimming space and room for corals to grow.  The original rock work design was a spur and grove pattern with caves and tunnels.  Much of this has since been hidden by coral growth and rocks added afterwards.  It is still common to see a fish enter a cave at one end of the tank and see it emerge on the other side of the tank.

You may have noticed that the tank is not stuffed with massive SPS corals.  I regularly trim them back and trade the frags in to cover my dry good expenses.  Several months prior to this writing several large corals were cut back.  Each had to be pruned up to fit inside separate 5 gallon pails to be transported to my local reef shop.

I envisioned a diversified invertebrate community tank dominated by soft corals.  However, as I went along the SPS bug bit me pretty hard.  I decided to move away from a soft coral tank and move to a SPS, LPS and clam tank with a few soft corals and colonial anemones to fill in the gaps.

I’ve always used a fairly deep substrate of 4 to 5 inches even before deep sand beds became trendy.  I like the look of crisp white sand contrasted against purple coralline encrusted rocks..

Fish have never been a real interest.  I just wanted a few functional fish (algae grazers), and perhaps a fish or two with no special function – just some color.  If I had to do it all over again (which I expect to in a few years), I would be more careful in my fish selection and invertebrate selection. 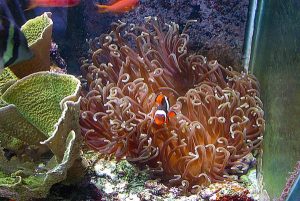 The primary circulation pump is an Iwaki MD70RLT  (about 1,500 GPH at 4ft head) which moves water from the sump to the display tank via two Sea Swirl oscillators.   I added a closed loop later on using a MAK4 (about 1100 GPH at 4ft head).    In addition I have two Gemini power heads that each circulate 950 GPH.  These are the only in tank power heads.  Both Gemini power heads are operated on an old LaVoie Technology & Invention WS-1 WaveStrip, which operates each pump for about 5 minutes on and 2 minutes off.

Due to the high cost of electricity in the New York area, I am in the process of redoing all my plumbing work to use an AmpMaster 3000 on a closed loop and use the MAK4 for sump to tank circulation in addition to the two Gemini power heads.

I am currently using the AB Aquaspace light fixture with 3x250w HQI and 2x24w Power Compacts.  I use the AB double ended 10,000k  (actually are 12,000k rated) and I am thrilled with my lighting.   I’m amazed how the corals colored up and how the growth rates have skyrocketed since switching to this fixture.

I use no mechanical filtration of any kind.  The primary filtration method is a custom made expandable beckett based skimmer made by Reef Sciences.  I currently run this 32 inch tall skimmer with just a single beckett, however a second beckett injector can be added with ease.  The height of the skimmer is adjustable as well with an add-on riser tube extension.  An Iwaki MD55RLT powers the skimmer, which is an excellent pressure pump.

I use activated carbon every 2 to 3 months.  Just a few tablespoons in a tiny Fluval 1 canister filter that I let dangle in the sump for 48 hours; it gets the water sparkling clean and transparent.   I no longer bother with any caulerpa species of macro algae.  I grew tired of it constantly going asexual and dying off.  I now use either Chaetomorpha linum or C. crassa.  I’m not positive which species it is.   I’ve tried and tried again to get this stuff to go asexual and it hasn’t.  It grows much faster than any caulerpa species I’ve tried and has proven to be an excellent source of nutrient exporting.  I grow it in the sump under two 65w power compacts.

Biological filtration is handled by the sandbed and liverock.

I use no additives from a bottle.  I have not purchased anything like iodine or strontium in years.   Calcium and alkalinity are handled by a combination of a homemade 6 foot tall Nilsen Reactor to provide a 24/7 [24 hour/seven day/week] kalkwasser drip and a K2R Calcium Reactor.  When using both reactors, neither needs to be driven very hard and the combined sources yield better results than either was able to provide alone.

I currently have ten fish in this tank:  A mated pair of True Percula Clownfish ( Amphiprion percula ) that I got in 1997.  The clowns pick a nesting site and lay eggs every 2 to 3 weeks.  An Engineer Gobie ( Pholidichthys leucotaenia ) from 1998,  Purple Tang ( Zebrasoma xanthurum ) from 1998,  Sailfin Tang ( Zebrasoma veliferum ) from 1999,  Foxface ( Lo vulpinus ) from 1999,  Chevron Tang ( Ctenochaetus hawaiiensis ) from 2000 and three Lyretail Anthias ( Pseudanthias squamipinnis ) added earlier in 2002.

Corkscrew Long Tentacle ( Macrodactyla doreensis ) that I got in 1997 which spawns yearly (releases eggs).  Various mushrooms Rhodactis sp., Actinodiscus spp., and likely a few others.  In general the mushrooms are orange, red, metallic green, and blue ones that frequently release some kind of eggs/sperm bundle.  The tank has several large sections covered in various Zoanthids. 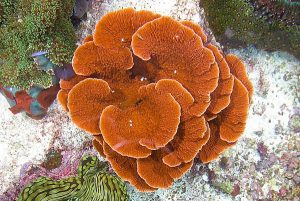 The tank has 5 or 6 sea stars of various types.  The most striking is a bright orange linkia looking sea star that stays out in view day and night.  Two blue tuxedo urchins ( Mespilia globulis ), and a rock crab or two I gave up on trying to capture. A handful of Tigertail   Cucumbers ( Holothuria impatiens ) clean the sand.  These are a result of the asexual reproduction of the original tigertail splitting in two each year around the August time frame.  The tank is loaded with various amphipods, bristle worms, and tube worms (mainly Sabellidae sp ).

The tank lacks any shrimp, snails or hermit crabs.  That’s right not a single hermit crab.  Ok, I confess it does have a one lone tiger trochus snail that has survived from the early days but it is a rare to see it.

I prepare my own frozen food slurry inspired by Sanjay Joshi’s recipe, but I make it differently each time.  If I find a decent plankton based food at the LFS I’ll buy a few packs and add that to the mix as well.  When blending the mix I make sure there are plenty of very fine particles.  I feed what looks to be about the equivalent volume of 10 to 12 Formula 1 style frozen cubes per night.  Since I have Anthiases I also try to give them a light feeding in the morning and when I get home from work.    The tangs are offered a full sheet of Nori 2 to 3 times per week.

The anemone and various brittle and serpent sea stars are target fed chunks of cocktail shrimp soaked in selcon.

I do very few water changes mainly because it puts all the upper corals out of the water.  I think I have done one water change in the past year, which was after a tank spawn.   The only water parameter I regularly test is alkalinity to make sure the tank is between 10 to 12 dKH.  Every now and then I double- check calcium levels, every 3 months or so I calibrate the pH monitor.

Macro algae in the refugium are pruned monthly.  Corals are pruned regularly and traded in to cover operating expenses.

Obviously, new people to the hobby should follow a much tighter regimen including  regular water changes and water testing.   A tank that has matured for several years grows and behaves differently than newly established tank. 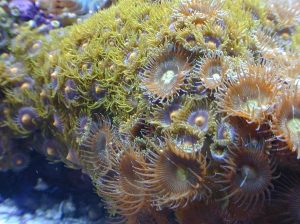 This tank is running the original prototype standpipes that later became known as “Durso Standpipes.”  They are covered with very thick sponge and tube worm growth.

Almost all of the corals in this tank are from other hobbyists. The only known wild coral I have is the Octobubble Coral Plerogyra sp. All the SPS corals, branching hammer, gorgonians, mushrooms and zoanthids came from fellow hobbyists I’ve met in my travels.

The spawning events that happen yearly are very special.  Even the mushrooms release egg/sperm bundles which seems to be pretty rare.  Watching the long tentacle anemone release hundreds of thousands of eggs is an amazing family event, that we all gather around to watch.  But it is a lot of hard work cleaning up the mess the next day.  Nothing is neater than watching the clownfish build a nest and lay a few hundred eggs.  The dances they perform and the rhythm they develop taking turns is just amazing to watch and reminds me of what this great hobby is all about.

The biggest problems I have with the tank are mushroom and zoanthid rapid and uncontrolled growth.  They have reached the point where they are growing in the branches of some of the corals killing them as they go along.  I’ve traded in hundreds and hundreds of mushrooms and many hobbyists have gotten bagfuls of them.  If natural biological control is not identified soon I expect to take the tank down and start over in a few years.

Detailed information and growth sequence pictures can be found at:  www.rl180reef.com