Several hobbyists from the Upstate Reef Society had noticed the450 gallon fish-only saltwater aquarium during our family visits to the Seneca Park Zoo, in Rochester, New York. The display seemed more like a decoration adorning two higher profile exhibits (polar bears and sea lions), and such was generally overlooked by many visitors. While the location was both appealing and challenging, the setup itself was a second-hand donation with scuffed acrylic panels, outdated equipment, and artificial reef structures. One URS member finally spoke up in May of 2002, believing that a reef aquarium would be an ideal addition to the zoo and that his local reef club would be able to sponsor, design, build, and support such an endeavor.

The majority of the club was quite enthusiastic of our new purpose! The URS forum was used for preliminary discussions, and several meetings were held to determine direction. Arguments raged over nearly every detail of the tank, including the initial discussion as to whether to retain the existing system or to build from the ground up. After several attempts to refinish the old acrylic tank, it was decided by those with sore elbows that we should replace the tank itself and salvage all else. However, one of the early meetings with the zoo staff brought to our attention that the 4′ tall stand was too high for the majority of the patrons (children) to appreciate, so after another series of meetings, it was unanimous to start from scratch. As with most public endeavors, the zoo is somewhat under funded and its executives made it clear that we would be responsible for raising the necessary funds to create the project. A formal proposal was finally submitted in August, and it was verbally accepted by the Seneca Park Zoo Society in October.

Additional discussions resulted in a basic plan for the tank and support system as well as an estimate as to cost. It should be noted that while several members assumed ‘ownership’ of various aspects of the project, most decisions were made by consensus. Arriving at such agreement was often time consuming and, at times, compromising. We all had “deserter issues” that would cause us to drop involvement, like tank size, which helped to order our priorities. Although we had all maintained successful reef tanks, none of us had ever taken on a project of such scope. Requiring consensus forced all of the participants to consider issues that might have otherwise not been addressed. The resulting plan combined the experience and skill of several advanced reef-keepers into a robust, economical system.

Raising money is a tedious process… Of the conservative $10,000 setup estimate, we found ourselves several months later barely half way there! Needless to say, the next series of club “discussions” debated the initial “all or nothing” plan or whether we should do what we can with what we have. Miraculously, before the threads could be closed, another member broadened the scope for donations! Instead of focusing on money, the shift was toward equipment. Before we knew it, numerous vendors across the country made extremely generous donations which literally kept the project “afloat”.

After several more months of assembling funds and equipment, a tank design was chosen and the 10′ long 560 gallon glass tank was ordered in February, 2003. In March, members simultaneously worked on demolition of the old system and construction of the new stand. Site construction actually began by moving the door to a storage closet… Though the old tank was against a wall, the new one would stand out 3′ from to enable covert access from behind, allowing us to perform maintenance even during peak hours.

To our dismay, the tank arrived later that month broken, so it was solemnly returned. But, prerequisite work continued. The stand was completed, the light rack was built and installed, electric systems started, and even much of the plumbing could be done while we waited. Virtually every aspect of the system was designed and constructed from clean sheet. When the replacement tank arrived in June with a damaged corner, we consulted the builder, and installed additional support cleats for reinforcement opposed to another setback. Several other “opportunities” reared their heads during the final completion, but thorough planning resulted in a comprehensive design that attempted to address any possible contingency and allow for flexibility. It was during this construction phase that the skill and dedication of all the participants became brilliantly apparent.

When saltwater was finally added to the system on July 27, 2003, it was the culmination of efforts from a group of would-be strangers, who met through reef keeping, and shared the dream of having a ‘world-class’ reef tank in our community. The dedication of these individuals continues today both in providing regular maintenance and support as well as livestock and equipment donations. The result is a reef aquarium that lives up to the dream. 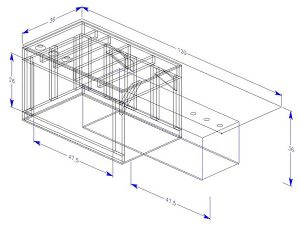 Four 1.5″ drilled bulkheads spread across the back top of the tank for return plumbing, and two glass overflow boxes adorn the return corners providing a total of (4) 1.5″ drains and (2) 1.5″ closed loop intakes. 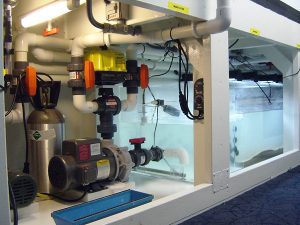 The stand design is unique with access only from the back of the tank. One of the obstacles was cleanly routing all the 1.5″ plumbing from the rear of the tank as viewed to the “front” of the stand, and then back for return to the tank. The front of the cabinet is seamless, covered in laminate counter top material, the back is open. Because the tank is nestled between two walls spaced 13′ apart, a novel canopy was created. First, a 12″ tall header was bolted 18″ over the front edge of the tank between the walls. Then the locking doors were suspended from it. The sides were closed in with “facades”, whose design maintained a full height window for looking down the full 10′ length of the tank! 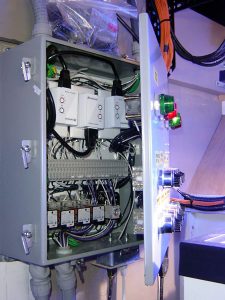 The 10′ length of the tank posed a few challenges in creating adequate water motion throughout. To make better use of only 2 pumps, each is equipped with a Hayward 1.5″ actuated ball valve, which alternate on 3 minute intervals to concentrate flow. The main pump, a Sequence 4600 SEQ22, returns about 2000 gph through 2 pairs of spray bars along the back of the tank. Each has a vertical pipe directing current left (or right), and a horizontal bar providing surface (or bottom) movement. Additionally, a closed loop system, fed by an Iwaki 100RLD, pushes a similar amount of water from either end of the tank where it exits via a 1″ seaswirl and 3 nozzles directed towards the opposite side. Though it may be desirable to switch directions more often, the current interval requires a low level of valve maintenance. 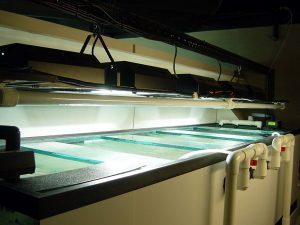 The system is monitored and controlled via a purchased neptune ACII.

An isolation coupling on the electrical panel was required to filter electrical noise produced by other equipment in the building. There are (2) 500 watt titanium heaters, one being run from it’s own thermostat for backup. Cooling is provided by several 4.5″ fans which blow across the water and circulate air to the rest of the room.

About 500 lbs. of mixed live rock was aquascaped by a LFS owner so there wouldn’t be any arguments over “artistry differences” amongst the group. Skimming is provided by a MyReef dual becket MR-4 driven by an Iwaki 70 RLT pump. The sump was modified to accept an egg crate tray which holds 12″x18″ filter pads (changed every other day). It is also home to macro algae (Chaetomorpha) which resides on top several inches of mud substrate whose 6′ length is lit by (4) 28watt pc (12 hr reverse light cycle). A single cup of carbon is changed every week or two. 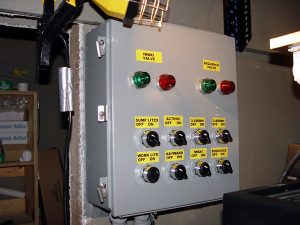 All water used in this system passes through an Aqua FX 200gpd 5stage dual membrane RO/DI system located remotely in a supply closet. Top off is through a direct feed solenoid, time controlled via X-10 using a float switch and a float valve back up. The system evaporates about 4 gallons per day. 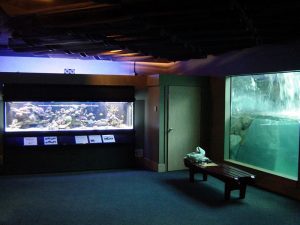 The display is lit by (2) 400 and (3) 250 watt Ushio 10kK metal halide bulbs in PFO pendants (glass removed), and (8) 5′ 150watt Actinic VHO florescent bulbs, all mounted to a custom designed light rack which suspends 10″ over the tank. Icecap electronic ballasts power the VHO’s and center 250MH; Hamilton ballasts run the other lamps.

There is 1-2″ layer of Pure Caribbean Aragonite sand covering the bottom of the aquarium. 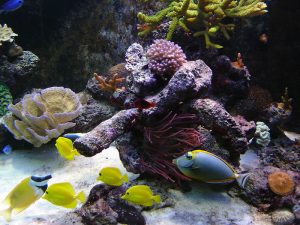 Alkalinity and Calcium are maintained via a Korallin 3002 calcium reactor package from Premium Aquatics. B-ionic is added periodically to maintain levels.

A 40 gallon water change is done about every two weeks. All water removed from the tank is siphoned off the top of the sand and rock in the display or sump. 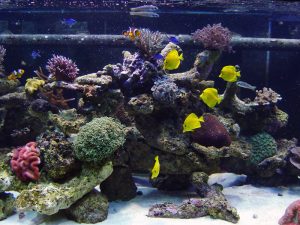 The system is fed once daily with an alternating combination of frozen and dried foods. The main staple is 3 cubes of Mysis shrimp and ¼ sheet of Seaweed Selects on one day, and 1 tbs. of flake food is given the next. 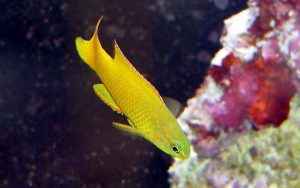 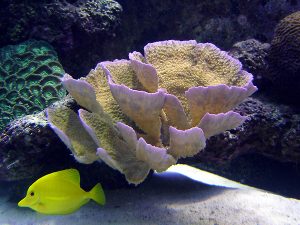 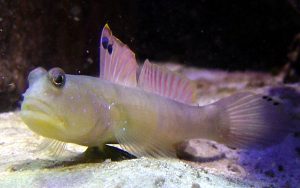 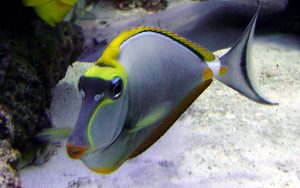 A pictorial chronology of the Seneca Park Zoo Aquarium