Fiber Optics And The Reef Aquarium

About two years ago I met Ken Green of Concept Lighting. He is a Cichlid breeder who also happens to design and sell industrial lighting systems. He helped me in the selection of the lighting system for my 2000 gallon tank (see the 2002 Marine Fish and Reef Annual for details). He and I began talking about fiber-optics lighting and working together we assembled a system that we could experiment with to learn whether fiber-optic lighting was practical in a reef tank. While experiments continue, I thought it time to share what we”ve found so far to encourage others to explore the possibilities of adapting fiber-optic systems for lighting a reef tank. 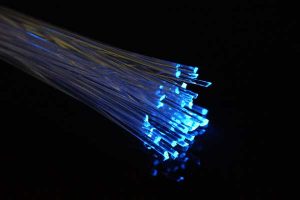 Working with Mr. Green, we assembled a system that I will outline below to demonstrate some of the possibilities. The system was assembled from “off the shelf” components, but the parts were not designed for reefkeepers, so don’t expect to find these systems showing up in fish stores anytime soon. Given aquarist’s history for modifying and adapting products for use in the hobby, hopefully this report will prompt sufficient interest in the approach so that companies like Concept Lighting will sell to the hobby.

Fiber-optics has its own jargon that refers to the various components making up a lighting system. An illuminator is the light source that generates the light. The illuminator is a box containing the light source, a ballast when necessary, and a fitting that mates with the optical cable. The fitting that couples the optical cable to the illuminator is called a fiberhead. The fiberhead combines one or more fiber-optic cables (figure 2). The close-up in figure 3 shows the individual fibers sealed in a fiberhead. The fiber cables used in industrial lighting design are of different design from those used for telecommunications. The “glass” fibers are actually plastic. They are more flexible, less fragile, and less expensive. Fiber optic cables are typically rated in strands, which is the number of individual fibers in a jacketed cable. It can range from 25 to 75 or more strands in a single bundle. Most illuminators can handle multiple bundles, so a typical illuminator might have a
capacity of up to 500 strands which might be made up of a large number of small capacity cables or a smaller number of large cables.

Illuminators in the past have used quartz halogen light sources so they suffered from relative low efficiencies and low color temperatures in the range of 2500-3000 degrees Kelvin. However, new designs are coming out using 150 watt HQI single ended metal halide bulbs. Thus far the available metal halide bulbs have only been rated at 4000 K, but as I”ll show shortly, the rating appears to be conservative. The good news is that the bulbs are rated for 10,000 hours. These appear very similar to the metal halide bulbs used in LCD projectors (figure 4).

Evaluating a fiber-optic system has proved to be a challenge. One does not use a fiber system in the same way one might use a fluorescent bulb or metal halide system, so comparing these results to published reports of other lighting systems should be made with caution. Measuring the intensity of the illuminator two feet away from the bulb as I have measured metal halide bulbs produces PAR of 246 mE/m2/sec. This compares to 165 mE/m2/sec for the Iwasaki 400 watt bulb evaluated in my May/June 1997 Aquarium Frontier’s article.

One might conclude that the illuminator generates more intense light than a 400 watt metal halide bulb. In a literal sense it does. However, the illuminator uses an integrated dichroic reflector, so one is comparing a bare single ended metal halide bulb to the intensity of a 150 watt bulb with integrated reflector. (A similar confusion has fueled the notion that a double ended 150 watt HQI metal halide bulb generates more light than a single ended 400 watt Iwasaki bulb. Next month this column will review a new double ended bulb and ballast and address this issue in much greater detail.) Color temperature measures 6000 degrees Kelvin and the light quality is very reminiscent of an Iwasaki 250 watt metal halide.

The key measurement for comparing traditional lighting systems to a fiber- optic system is how well the illuminator and fiber-optic cable maintain intensity as distance from the bulb increases. The problem is that the intensity depends on the number of cables and how they are configured. Using a single 500 fiber cable ten feet in length, the intensity at the end of the fiberhead exceeds the capacity of the LiCor Datalogger, which is greater than 10,000 mE/m2/sec, or five times the intensity of equatorial noon-day sun. At two feet from the end of the ten foot cable the light intensity is 86 mE/m2/sec. This means that twelve feet from the light source the light intensity is still 60% greater than that of a bare Ushio 175 watt bulb measured at two feet from the bulb. A second more practical configuration I have been working with is separate multiple bundles so that a large area of a tank can be illuminated. For this configuration I”m using 50 strand cables fit with underwater lens
designed for use in swimming pools (figure 5). With six separate cables, the light intensity at each lens exceeds the capacity of the Li-Cor Datalogger. Even at one foot from the lens, each of six strands is generating an intensity of 68 mE/m2/sec. This intensity is at the end of six separate six foot bundles all illuminated by the same 150 watt metal halide bulb.

The underwater lens is intriguing because it enables one to place the fiber- optic cable underwater. A source of light loss is the distance from the tank’s water surface where a metal halide has to be placed. Generally, the bulb is placed a half foot or more from the surface of the water. Light is reflected off the surface of the water, so intensity in the tank is considerably less than the bulb generates. With the underwater lens, the lighting system can be essentially placed underwater, reducing light losses due to distance and light reflecting off the water.

High intensity lighting generates a great deal of heat. Placed close to the water surface, metal halide bulbs can increase water temperature by several degrees. Another intriguing aspect of fiber-optic lighting is reduced heat. The temperature at the lower edge of one of my 400 watt pendants approaches 100 degrees Fahrenheit over ambient air temperature. The 500 fiber fiberhead runs ten degrees cooler despite the higher light output. No increase in temperature over ambient is found with the underwater lens. 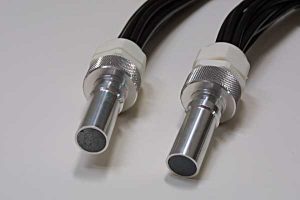 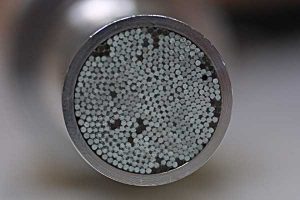 Fig 3: Individual strands are clearly visible in the fiberhead 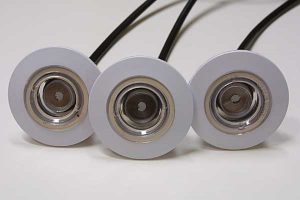 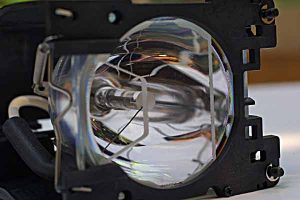 The more one learns about fiber-optic systems, the more one realizes that fiber-optics open up many new possibilities. For example, lighting hoods typically add one to two feet in height to a reef tank. With fiber-optic lighting, there is no longer a need for a lighting hood. The light source can be mounted any place near the tank, even under it. I”ve been working with ten feet lengths, but up to twenty feet cable lengths are practical, particularly if one uses the underwater lens. This means one could mount the illuminator in another room.

There are a great many issues to be worked out. I”ve illuminated corals for short times with the fiber-optic system, but I have yet to do long term studies. The flexibility of fiber optic lighting raises philosophical issues. For example, using six 50 strand cables, I can illuminate a 55 gallon tank more evenly than one can with a single 150 watt metal halide bulb. However, one key question is whether it is more important to evenly illuminate an entire tank or create higher peak intensities in some portions of the tank. My work thus far also raises the question of hybrid systems. For example, one option is to direct the output of a fiber-optic light source into a specular reflector. This would allow us to use remote light sources while retaining the light spread found in current systems. The small integrated reflector metal halide bulbs might be used for reef systems even if we do not use fiber- optics. Should the hobby be examining the small metal halide bulbs used in LCD
projectors and illuminators? And, what about creating our own illuminators using higher Kelvin metal halide bulbs? Why not create illuminators specifically designed for reef tanks? There are many such questions and few answers, but I hope this progress report has generated sufficient interest for others to begin exploring the possibilities.