One, two, three… Uhhhh? Where is the fourth fish I just bought? Ohhhh! Perhaps if I look in from the sides of the tank or peer down from the top or contort my head at just the right angle, I’ll be able see it hiding within the rocks or corals or algae. Or maybe not. Or perhaps if I wait until lights-out and stare into the tank with a flashlight I’ll see it. Or perhaps if I stop sticking my face against the glass, the fish will stop being frightened and come out on its own.

This scenario probably sounds familiar to many aquarists. After all, we do watch fish for pleasure. And in order to maintain our fishes’ health, we scrutinize their appearance and behavior. But we are apt to gloss over the fact that the fish are capable of staring back. Not that they would since they don’t ponder the world in quite the same manner as we humans do. Our relationship with our fish then is mostly one sided. The fishes don’t care about our health one iota. They are incapable and are too busy dealing with the their own immediate needs in their own environment, within the confines of a tank’s walls. Their problems are all survival related, from competition for food or territory to hierarchical aggression from conspecifics to presentations of possible reproductive opportunities. But most of the cues that set off the behavioral responses from individual fishes are, in fact, visual in nature. The fishes of our aquariums apprehend a wide range of colors and shapes. They perceive allies and rivals thru color. And a pair of gawking eyes is an easily recognizable threat as is the shape of a gaping mouth. This is why we, as aquarists, should take a moment to appreciate life from the perspective of a fish by delving into some of the aspects of the fish eye. 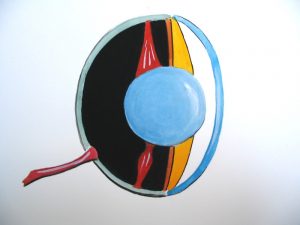 We begin with a generalized discussion of fish eye anatomy. ‘Generalized’ because the term ‘fish’ is not scientifically descriptive of the wide ranging and often distantly related species we think of as fish. Basically, there are too many idiosyncracies in eye structure among the various fish groups to be covered here. But we can start by stating that the structure of the generalized fish eye is not far removed from other vertebrate eyes like our own human eyes. Like the eyes of terrestrial vertebrates, fish eyes have a cornea, an iris and a pupil, a lens, and a retina. The process of actually turning light into images begins at the retina, the parabolic shaped surface at the back of the eye, where photons of light are received and transformed into electrical impulses for interpretation by the brain. The retina contains the photosensitive receptors, cells called rods and cones, which accomplish the task of receiving light, transforming it into impulses, and directing it through nerve fibers leading to the brain. We can appreciate the amount of information transmitted thru the nerve fibers when we realize that the vertebrate eye houses millions of nerve fibers relaying information from millions of photosensitive cells.

A prominent characteristic of the fish eye, from the outside at least, is its bulbous nature. Some of the reasons for this will become apparent. The outer layer of the eye, the cornea, is dome-shaped and transparent. It is the first to receive light. With the terrestrial vertebrate eye, light travels through the air and hits the cornea. Because the air and cornea are of differing densities, the light is refracted (bent and directed) into the opening called the pupil. Water and cornea are of about equal densities so there is little refraction with the cornea of a fish eye. Again, with terrestrial vertebrates, the iris is the colored aperture that opens and closes, adjusting the size of the pupil and the amount of light entering the eye. 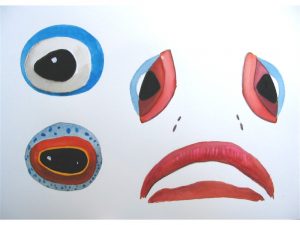 But in most teleost fishes, because of the protruding lens, the iris is rigid, making the pupil a fixed size. Therefore, to compensate for the amount of light entering the eye, an amount which could be too intense or not intense enough to measure, the retina adjusts the position of the photo receptors. And whereas our terrestrial eyes adjust to light levels within a few moments, fish eyes take much longer. We can observe this in aquarium fish that have been subjected to suddenly having their tank light turned on. Such fish typically hide until their eyes have adjusted to the light, which can take fifteen or twenty minutes. Certain lucky shark species have eyes equipped with an adjustable iris. The silky shark, for example, has an iris that is a vertical slit similar in appearance to a cat’s eye. (It is interesting to note that in vertebrates, eye color and skin color are often genetically linked. Like in house cats, for example, where coat color and eye color change according to breed. Fish eyes are no different.) Behind the iris is the most noteworthy feature of the fish eye, the lens. In fish the lens is usually sphere shaped and rigid and protrudes into the pupil opening, a very different arrangement than the lens of the human eye, which is almost flattened and positioned behind the pupil. In both the fish and the human eye, it is muscles acting on the lens that determine whether an image is properly focused on the retina. The difference is that in the human eye the shape of the lens is altered, whereas in the fish eye focusing is accomplished by changing the position of the lens.

Now that we know by what morphological mechanisms fish see, the question arises, what do they actually see through their fishy eyes. Anyone who has been involved with photography has probably heard of a fish eye lens. The image through such a lens is so wide that it is distorted. Moving from the center out, objects appear curved, the light bent inward. Originally, fish eyes lenses were used to photograph the night sky, because of their capacity to capture a lot of information. But for the purposes of our biological discussion, they probably do not provide a completely accurate representation of what fish actually see through their eyes. One reason is that the lens of a teleost fish eye is eccentrically positioned, which alters the lens-to-retina distance in certain parts of the image. This provides fish with close up vision forward and far vision to the side. Essentially, the fish is nearsighted when looking forward at a food item near its mouth, but is farsighted to the side and is able to locate possible predators lurking in the distance. But because most fish have eyes situated on the sides of the heads, their ability to judge distance is not as acute as it is with terrestrial vertebrates. (As humans our eyes look forward so we have binocular vision and are able to judge distances fairly accurately). And because their eyes are situated on the sides of their heads, fish almost have a three hundred and sixty degree view of their world. Of course, fish with broad heads or large tails have blind spots they must compensate for by sweeping their heads from side to side. 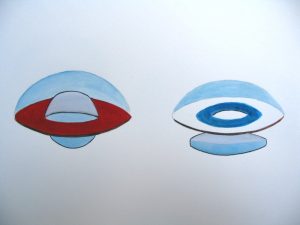 Spherical lens of fish eye (left) protruding through pupil opening of iris. Flattened camera-like lens of human eye (right) sitting below iris and pupil.The human iris is therefore adjustable according to light intensity,while the fish eye iris is not.

Because fish inhabit water, a dense medium that absorbs, scatters, and bends light to a degree that makes seeing under water different and more complex than seeing in air, they have evolved, our of necessity, specific anatomical characteristics of the eye. In water colors ‘behave’ differently, and are not so easily differentiated. Therefore, fish eyes, to varying degrees, are equipped with retinal cones, which detect color ranges of color. Remember that there are two types of photo-receptors on the retina of the eye, rods which are sensitive to light in general, and cones which are sensitive to colored light. The ratio of rods to cones varies according to fish habitat. A deep sea fish, for example, which lives in dim light where rods are more useful than cones, may have a rod to cone ratio of several hundred to one. Conversely, a coral reef fish, which inhabits relatively shallow water where color abounds, may have a rod to cone ratio of ten to one. In both cases rods outnumber cones, but cones are clearly more useful on the coral reef. However, there is still much research going on into why coral reef fish are themselves so colorful. One theory involves the flaunting of bright colors as a warning to predators and another involves colors as camouflage. But the salient point here is that most aquarium fish do indeed perceive a complex range of colors, although their perception of color is slightly different than ours. There are different types of cones in a fish retina, and each one is sensitive to a different range of color. Most fish, like humans, have red, green, and blue sensing cones, but the range of each color sensed varies. Additionally, some reef fishes, like damselfish, have been found to perceive UV (ultra violet) light, and to have patterns on their bodies that can only be seen under UV light, presumably for attracting the attention of conspecifics. This is similar to markings that are found on some flowers, and that are only visible to UV sensing insects like bees. There is much going on in the natural world that is undetectable by our human eyes.

Hot Tips: Bare Bottom or Sand Bottom and Why