When mini-reef aquariums became more popular in the saltwater aquarium hobby, so too did the shrimp, clams, other invertebrates and smaller more delicate reef fish that thrive in the mini reef environment. The greater popularity in keeping decorative freshwater planted tank has also fostered an interest in a new diversity of creatures which can flourish in a planted tank environment. The explosion in new freshwater aquarists keeping small ornamental shrimp in planted tank environments has created a whole sub-hobby that is dominated by the keeping of crystal shrimp.

The Crystal Shrimp is very popular because it is easy to keep, easy to breed, and it is very easy to have success with this aquatic animal even for a novice. Crystal Shrimp require stable water conditions that do not change too quickly. CRS prefer water that is slightly acidic and a temperature that is slightly on the cooler side with a range between 68-78 degrees Fahrenheit. One of the biggest advantages to keeping crystal shrimp is that it is possible to keep 5-10 individuals per gallon so a 10 gallon tank can easily accommodate a size able breeding colony. There are a ton of “specialized” foods which have been developed just for use with Crystal Shrimp but after having purchased a $20 tic-tac sized box of food that was mostly ignored by my shrimp, I now just stick to feeding a variety of quality fish foods that include flake, pellets and frozen. Another reason for the popularity of CRS is that their aquarium is often a good environment for the myriad of nano freshwater fish that
are coming out of South East Asia; there are many popular small danios and rasboras that are perfect tankmates for CRS, one of my favorites being the Celestial Pearl Danio and Mosquito Rasboras.

Crystal shrimp readily breed on their own in a “live-bearing” kind of way. There are a few sexual differences between male and female crystal shrimp but the only certain way to know is to wait until they breed and remember the pattern of the female once she has become “berried” for the first time. Also, the female can only breed right after molting, when the males can have access to her soft parts. When a pair of shrimp are mating, the female will be the larger, plumper of the two shrimp. The young CRS develop under the tail of the female CRS in relatively large and visible eggs that are often referred to as “Berries.” Depending on the aquarium water temperature, the young in the developing eggs can take between 20-30 days to hatch at which point they emerge as perfectly formed, tiny miniatures of the adults. Furthermore, aside from finer, smaller food particles, the young do not require any special feeds and they can be raised right alongside their parents. The adult CRS shrimp may not harm the young shrimp but tank mates even as small as an adult Edler’s livebearer can easily eat the young; something to keep in mind for your crystal shrimp tank if you plan to do a lot of breeding.

There are two main color types of crystal shrimp that come in an infinite gradient of patterns, quality and grading. The Crystal Red Shrimp (RCS) are red and white while Crystal Black Crystal shrimp (BCS) are black and white. They are sometimes also called red or black bee shrimp but the red color forms are by far the most popular and common variety of Crystal Shrimp. The Crystal Red Shrimp was selectively bred from the Bee Shrimp which is closely related to the Caridinia serrata species complex of these small crustaceans. Although the original ancestors of the Crystal Chrimp came from China, the crystal shrimp were selectively bred and developed primarily in Japan. In 1996 a Japanese researcher named Hisayasu Suzuki discovered a tiny bit of red coloration in the normally colored bee shrimp he was raising. In a short matter of time, this ancestral mutation was selectively bred to make the red coloration more intense and to increase the amount of white coloration in the body as well. In the decade since, the interest in Crystal Shrimp has become a phenomenon which has led to the development of a whole new cottage industry within the wider aquarium community. Some Asian aquarium shops specialize in Bee shrimp, there are “Shrimp Shows” that are competitions between the finest strains and the price of Crystal Shrimp now ranges anywhere from a few dollars a piece to over a thousand dollars for the most recently developed wine red or nearly solid black varieties. Although I’ve yet to see any of these demi-god varieties of the diminutive bee shrimp, below you’ll find a nice sampling of the various grades of CRS and CBS that you are likely to encounter in the wider aquarium market. 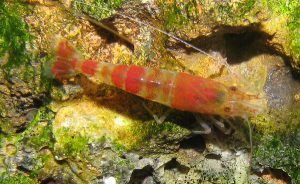 An example of a no white color CRS

For the last several years the name of the game with breeding higher grade CRS was to increase the amount of white, and to make it more opaque. The goal of this breeding is to develop the nearly all white shrimp with a tiny bit of red on the anterior of the body. Somewhere along the way some all white shrimp were produced but these are deemed an inferior grade to the SS or SSS grade varieties, but don’t ask me why.

This C-grade CRS has just a tiny bit of white color developing, just enough to call it a Crystal Shrimp. 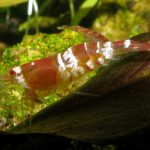 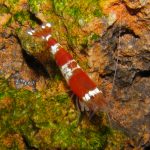 The B grade shrimp has a pattern of white and red which is just beginning to sort itself out into the several bands. IN the second image you can see that the white coloration is a little bit more prominent and it is fair to call this a B+ specimen.

The A-grade CRS will have fairly uniform banding with an almost equal amount of opaque red and white coloration. When the coloration of the red and white are very opaque and uniform an individual can be called A+ grade such as the specimen in the second image. 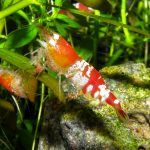 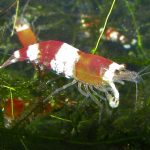 The small white notch in the center red portion of this shrimp is called “tiger tooth”. In this specimen it would still be considered an A grade because the white coloration is not very opaque in the midsection and it doenst have a 4th white band a the end of the tail. 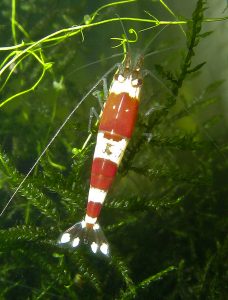 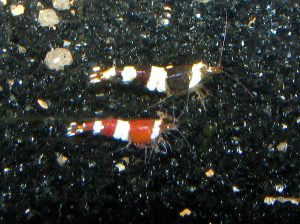 This image shows two A grades: A Crystal red shrimp with only three white bands and a higher A+ grade CBS that has a lot more white color developed and 4 clear white bands.

The S grade shrimp are the beginning of the slow march towards absolutely gorgeous shrimp. 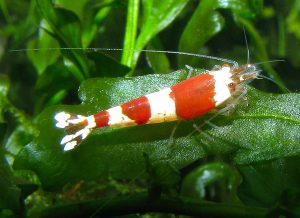 This S grade specimen below has a very opaque coloration with four clearly defined white bands. It also has white color which is beginning to encircle the center red band, a precursor to the Hinomaru color pattern.

This CBS has the tiger tooth feature in the center black band and it is a nicer specimen than the A grade CRS above because it does have 4 clearly defined white bands.

The two specimens below are beginning to show over 50% white coloration which makes them S+ grade: they have very white tails and faces and they are showing some white spotting in their red patches. 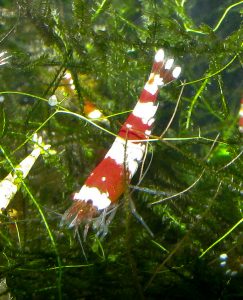 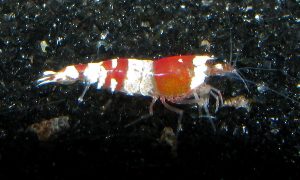 This CBS has very well developed white coloration which is just beginning to show the single Hinomaru feature.

Depending on the size of their second two red patches, a shrimp specimen may be an SS grade when at least one of these is clearly surrounded in white which is called “Hinomaru”. When both patches are surrounded in white the shrimp then becomes a double Hinomaru or “Double Hino” for short. 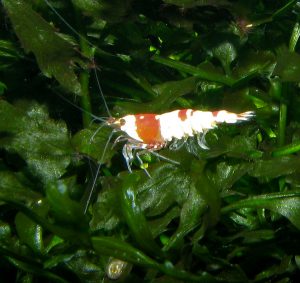 This specimen has one of these patches so it is a single Hinomaru which makes it an SS grade. The patch also has a band of white which looks like a no-entry sign and this characteristic is called “no-entry””. 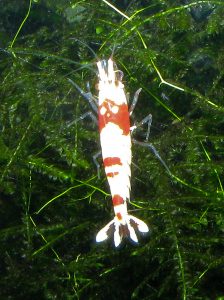 The specimen in this image has both of the white patches isolated so it would be an SS+ grade double hino, also with the no-entry characteristic. 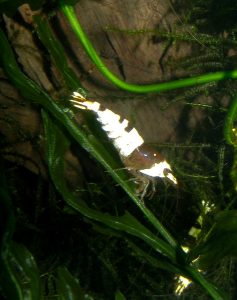 This CBS is a near perfect SS+ grade with well defined double hino and no entry feature.

This specimen has a little more red on the back than would typically qualify as an SSS grade and it just squeaks into this grading because of the abundant white coloration on the face and tail. With less red on the back and a more solidly colored tail this specimen would qualify as the ultimate CRS called Mosura.

The SSS grade is should be about 75% white coloration over the whole body, with an extremely opaque coloration. The specimen below has a little more red on the back than would typically qualify as an SSS grade and it just squeaks into this grading because of the abundant white coloration on the face and tail. With less red on the back and a more solidly colored tail this specimen would qualify as the ultimate CRS called Mosura. The CBS shrimp below it is a young shrimp that may develop into a full grade Mosura if the white becomes very opaque with age. 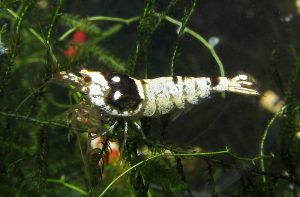 This CBS shrimp is a young shrimp that may develop into a full grade Mosura if the white becomes very opaque with age.

This all white shrimp is on equal grading with SS shrimp because it is more desirable to have a CRS with a least a little amount of red coloration. 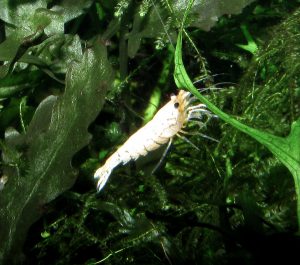