In retrospect, the first reef aquarium I ever saw was not much. It was in the early 1980’s, and ‘European’ technology had jumped the pond to America, revolutionizing and revitalizing the saltwater aquarium hobby. This particular 90-gallon aquarium had a few large-polyped stony corals (such as Euphyllia and Plerogyra), the then obligatory ‘weedy’ profusion of Caulerpa algae, and a healthy dose of slimy cyanobacteria. But all this literally paled in comparison to the ‘new’ technology – especially the intense lighting provided by pendent-mounted metal halide lamps. Not only was the aquarium well-lighted, but the dancing ‘glitter lines’ throughout the aquarium gave it a natural appearance. For its time, the sight was astounding. Of course, we now take glitter lines for granted as a natural part of an artificial environment. 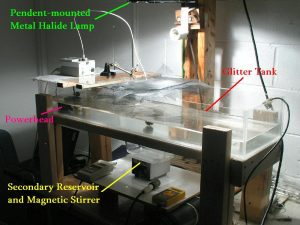 Figure 1: A view of equipment used in this experiment. Note that conditions in the photo are not representative of the experiment’s set up (i.e. the PAM Fluorometer is seen measuring the rate of photosynthesis within a Porites coral within the upper vessel). See text for details.

We’ll use the popular name of ‘glitter lines’ in this article (although I would prefer the technically correct term ‘caustic network’. ‘Glitter’ refers to the reflection of light from the water’s surface. See Lynch and Livingstone (1995) for details. Other popular terms for the caustic network include ‘shimmer’ and ‘flicker’). Glitter lines are caused by focusing and de-focusing of light by ‘lensing’ (both concave and convex) action of water surface waves, and certainly add a nice effect to any reef aquarium. But is there more to glitter lines than simple aesthetics – what of their effects on photosynthesis, especially within the photosynthetic apparatus of symbiotic zooxanthellae? This article will present some initial data from recent experiments relating to the physiological effects of glitter lines within aquaria, and also how our artificial glitter compares to that found in natural reefs.

There is scant evidence of effects of ‘natural’ glitter lines on photosynthesis. Walsh and Legendre (1983) report the effects of artificially produced ‘glitter’ on phytoplankton and suggested that intense light flashes would increase the rate of photosynthesis in marine phytoplankton. However, Stramski and Legendre (1992) suggest the methods of the earlier experiments were not truly representative of natural light fields and called the results into question. These latter researchers designed a wave chamber for use in phycolgy experiments and this concept was used for determining effects of glitter lines on coral/zooxanthellae photosynthesis in this report. 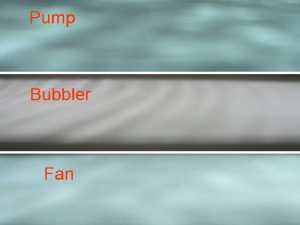 Figure 2: ‘Glitter lines’ produced by various means. The contrast in the photos has been altered for clarity’s sake

Since water motion affects the rate of photosynthesis (see Riddle, 2004; Adams, 2006 IMAC presentation), a means of maintaining constant water motion while varying surface agitation (thus creating glitter lines) had to be devised. To accomplish this, a Plexiglas ™ tank (107cm L x 28cm W x 15cm D; about 42”x11”x6”) – hereafter called the ‘glitter tank’ – was constructed along with a wooden stand to support the glitter tank above a smaller, water-filled secondary reservoir (which held a specimen of the Lobe coral, Porites lobata). A magnetic stirrer and 8cm stir bar provided constant, repeatable water motion to the coral within the smaller vessel. The glitter tank was filled with 8 liters of freshly collected seawater. A pendent luminaire housing a 400-watt, 6500K metal halide lamp (Iwasaki ‘DL’ lamp) was suspended 36cm above the glitter tank. See Figure 1.

Agitation of the water surface was variously provided by an aquarium air pump (Tetra Luft pump) and coarse air-diffusion, a powerhead, and by air motion provided by a small electric household fan. Each method provided a different water surface signature (see Figure 2). Although the bubbler provided the most natural appearing glitter lines (with the ‘fan’ method running second), the wave heights (and hence ‘light spikes’) provided by these methods were of modest amplitudes compared to the chaotic and intense glitter generated by the powerhead (as measured with a calibrated Li-Cor quantum meter and 2 pi sensor). Therefore, the powerhead-generated glitter lines were used in subsequent experiments. 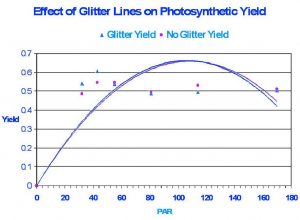 Rates of photosynthesis were determined by a ‘photosynthesis meter’ (a model 210 Pulse Amplitude Modulation – PAM – Fluorometer manufactured by Heinz Walz GmbH, Effeltrich, Germany). Photosynthetic Yield was recorded as a response to conditions of ‘glitter’ and ‘no glitter’ over a range of light intensities. Multiple Yield measurements were made in every case, and the average yield was used.

Figure 3 demonstrates the results of the experiment. The effect of glitter lines on photosynthetic activity is practically the same as that seen under condition of ‘no glitter lines”.

At least one previous report of photosynthetic activity under conditions of artificial glitter lines seems to have indicated an enhancement in the rate of photosynthesis (Walsh and Legendre, 1983). Although an explanation of this apparent contraction is beyond the scope of this article, it should be noted that natural glitter in shallow waters differs considerably in frequency, intensity and prismatic quality from that of artificial glitter (see Figure 4). 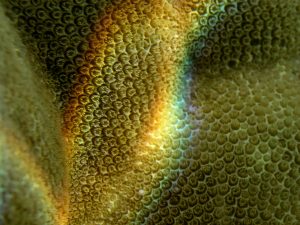 Figure 4: Natural glitter lines dance across the surface of a Porites coral in a tide pool in Kahalu’u (Kona), Hawai’i. Note how these glitter lines differ from artificially-generated glitter lines in Figure 2.

Even when various parameters were manipulated in this experiment (such as water depth, surface agitation and distance between the lamp and water surface), it was not possible to replicate glitter lines as seen in shallow tide pools here in Kona, Hawai’i. Natural glitter lines can produce light pulses about three times that of surface intensity (which is immediately followed by ‘de-focused’ light resulting in pulses of light intensity much lower than average). See Figure 5 for measurements made with a Spectrum Technologies (Plainfield, Illinois, USA) Watch Dog™ data logger and two PAR sensors (one above water, one below). In no case in this experiment did artificial glitter lines produce the high intensities seen with natural glitter lines (data not shown).

The lack of differences in photosynthetic yield under artificial glitter in the present experiment is fairly easy to explain. Since yield at each light intensity was initially measured with ‘calm’ (i.e., no artificial agitation, hence ‘no glitter’) conditions and moments later ‘with agitation’, it was easy to determine the high and low photosynthetically active radiation amplitudes. The average PAR value of glitter lines measured over short periods (a minute or two) always very closely equaled the PAR measured when a condition of ‘no glitter’ prevailed. In other words, the average intensity of the light field produced by glitter lines over a few seconds’ time cannot possibly exceed the average light intensity in a ‘no glitter’ condition under the same set of circumstances. One may wonder why photosynthetic yield, instead of electron transport rate (ETR), was used to compare effects. The answer is quite simple – computation of ETR requires a known PAR value be used in the equation, and this was not possible in the conditions of this experiment. The PAM 210 does not include a PAR meter (more expensive models do have an internal PAR meter) and it was not possible to synchronize instantaneous recordings of Yield and PAR (a measured with my Li-Cor quantum meter) in a highly variable light yield such as that seen ‘with’ glitter lines. In addition, one should not confuse the drop in yield in Figure 3 as Photoinhibition. It is natural for photosynthetic yield to drop with increasing light intensity. 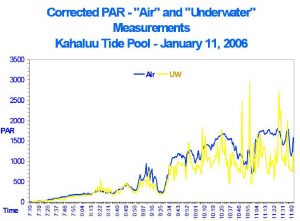 The real question is whether the high light amplitudes produced by artificial glitter lines would encourage a ‘ramping up’ of photosynthesis able to maintain a higher rate of photosynthesis during the brief (and inevitable) lower light intensities sure to follow the bright ‘flicker’. This report suggests it does not. The story may be different with ‘real’ glitter lines in nature, or in aquaria capable of generating larger waves with high frequency (which could approximate the waves seen in the observed tide pools). For now, it seems that glitter lines are more ‘show’ than ‘go’ (photosynthetically speaking) in most aquaria situations.