Two fables based on the horseshoe crab migration as witnessed in May, this year of our Common Era 2012, on the beaches of Delaware known as Bowers and Slaughter, by none other than me, your humble (though some would say blaspheming) scribe, knowing little of the hard science of horseshoe crabs, or the secrets of their long, tubular hearts, but having yet experienced much wonder at the seething tidal swarm of these aquatic arthropods, who are, it turns out, more closely related to arachnids than to the common crab!, and furthermore, having browsed at random through the world wide internet and also gleaned from my good companions’ research at the Philadelphia Free Library, only to be dazzled by the vast body of writings and scholarship pertaining to this most majestic of species, whose members have teemed along our earth’s coastal oceans for roughly 400 million years; whose recent past is vexed by over harvesting as crop fertilizer by way of bodily grinding; whose sundry eyes (compound and simple! plus photoreceptors!) have led to breakthroughs in the understanding of vision; whose unique, copper-based, and literally blue blood is extracted or “bled” for testing medicines via a catch-and-release technique; whose proliferation supports the continued existence of various species such as the imperiled and handsomely plumaged red knot flocks who annually supper on their eggs; and whose mating rituals—as re-imagined below in homage to Italo Calvino’s Cosmicomic scientific fictions as well as the early devotional writings of Margery Kempe and Saint Augustine—are very cool looking. 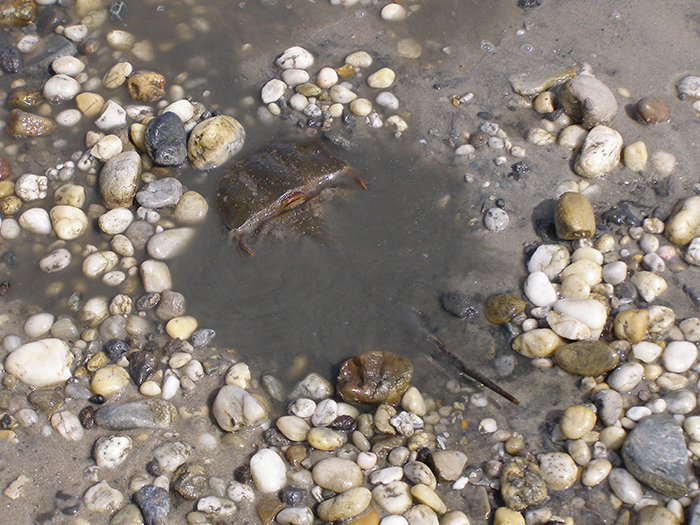 I. The Book of Margery

“There is reason to believe that mating only takes place in the presence of the sand or mud in which the horseshoe crab eggs were hatched. It is not known with certainty what in the sand is being sensed by the crabs nor how they sense it.”—from “Horseshoe crab” Wikipedia Entry

I wasn’t one of those females who had always fantasized about her tenth molt, sketching design plans of egg burrows and planning out where all the kelp details would be. I loved the early years, when I was the same size as the males: small. Also: swift, paddling through the water with my book gills, happy and free.

I would listen to the other girls scuttling in clumps on the sea floor, going on about their someday egg laying, and I’d feel pure disdain as I swam above them, water streaming through my gills, thinking of other things. Sometimes they would follow me with their two-times-a-thousand compound eyes, and I knew what they were thinking, they were sending it right back, like, girl, you should know better than to be swimming at this age. We were eighth molters. We were supposed to practice moving along on our claws, preparing for our new girth. It was expected that we’d measure, boast, compare.

I didn’t want to be the biggest. I did not look forward to those last one or two molt cycles when we would outpace our male comrades in the department of size, so that while they ceased increasing, we just kept making newer, bigger shells and dropping the old ones, adding another inch or two or three to our carapace circumferences, in preparation for laying.

I thought maybe the whole egg urge would skip me. I had heard about the occasional outliers. The non-breeders. I was proud to be a future member of their tribe. I was still so small that I would sometimes get mistaken for an immature male whose bulbous foreclaws hadn’t come in yet. It was more embarrassing for the others than for me, when they’d catch a glimpse of my genital pore and realized their mistake. Then it was always, oh, I’m sorry, I didn’t realize, and I’d be like, don’t apologize, I prefer looking this way!

So it came as a total shock to me that cold spring day when I suddenly came to—I had been dreaming about dry land—with a pull so strong I rocketed out of my winter nook. All I knew was that I had to get back to that sand. That particular sand. No other sand would do. It was shocking, I’ll say it again, just how strong the urge was; it went dead against the story I had formed about myself.

I had always thought that in order to know, for certain, like, I’m getting on the beach now, that I’d have to—I don’t know—resemble the others in some way. Develop some kelp-doily design plan of my own. But it turns out that I was pretty much the same. Still small, still kind of male looking. Except that now I really wanted to participate in this…process.

Before I could even get a plan together I found myself heading for shore. Trudy, Chantelle, Abeer, Jasmine, they were up ahead already, rushing along. They didn’t say anything when I came up on their heels. They were still trailing their doily visions of future sand holes, but now I could sense another quality, call it strength, call it determination, like they had what it took to get the job done, drag a male over, burrow in, lay eggs, then leave. They were all going on about whose foreclaws they wanted grasping onto their opisthosomas when the crucial moment came, and even though everyone knew I didn’t care about that part, it didn’t matter now, we all just kept moving forward, together.

Everything looked different, sharper, and not just because the water was a little warmer than this time last year. It was like my eyesight had been chemically sharpened, and I could sense everything that came before, before the dinosaurs, and then the dinosaurs, and then the great blanket of ash, and some time after that, the moment no one can totally pinpoint, when the shaky looking species started coming around, evolutionarily speaking, which was okay at first, sort of, with the hunting and gathering, but then they started in with that agriculture thing, which eventually led to the bad times, around here we call it the Grinding, and now there’s the Bleeding, and this uncomfortable warmth, and you’d think that all would give me pause, but I gained on the under shore, that moving lip where water butts against the air, and then, so help me, I went up and laid some eggs. 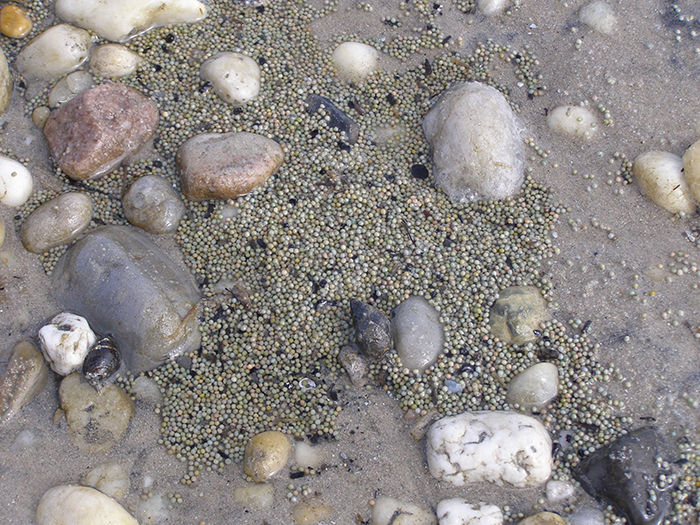 “Upon finding a mate, the males hook their pedipalps (the specially modified second set of clawed appendages) onto the opisthosoma of a female as she heads toward the beach. Sometimes additional males will attach themselves to the male, forming a chain.”—from “Horseshoe Crab,” a joint website of the Mid-Atlantic Sea Grant Programs and the National Oceanic and Atmospheric Administration

Margery came along, issuing her pheromone trail, and right as she passed I glanced to the side with my complex eyes, as if I had just then been distracted by something, when in fact I was waiting until she had bobbed up ahead a little bit, giving Eduardo just enough time to attach his bulbous foreclaws to the rim of her opisthosoma, and then casually, like oops! like all along I had been biding my time for Margery, I scooted forward and moved my own bulbous foreclaws into position, locking onto Eduardo’s smaller midsection. Margery kept right on plodding through the water, and Eduardo got still for a minute and said, “Yes, Augustine?”, not refusing my grip, but waiting, it seemed, for an explanation, a sort of public performance of disorientation on my part, as the initiating party, as the grasper in the situation, and so I uttered, quietly, I’m confused. And Margery only shrugged and continued, searching for just the right patch of sand into which to release her eggs, and from the shallows to the right, the left, above and behind, rose the soft, interlocking click of bulbous foreclaw to petite mid-shell, and here and there, and there, and there, Tyrone, Amar, Shlomo, all my brethren with whom I’d been moving shoulder to shoulder, shell to shell, toward the shallow coastal waters, for hundreds of miles, for weeks on end, softly at first and then louder, and then with a sort of zeal that bordered on ecstasy, latched aboard, muttering and crying out I’m confused, I’m confused, I’m confused! 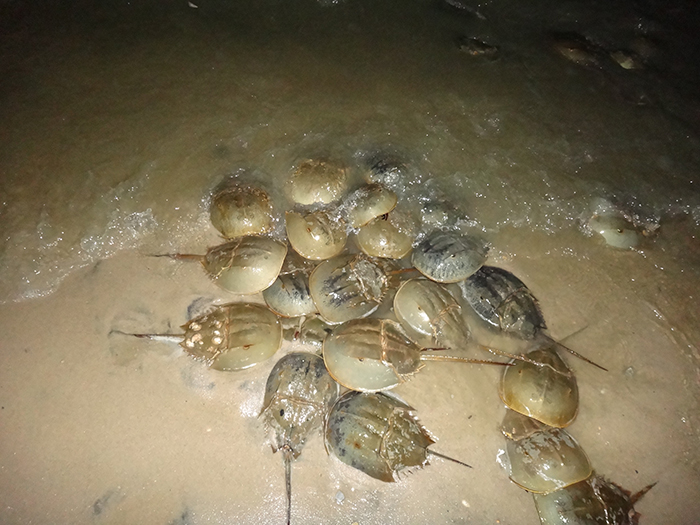 Occasionally, flashlight beams interrupted our congress, or boot-laden feet sloshed among our ranks, accompanied by cries of Look! It’s a whole chain! A female is dragging two males! No, three! As if they had any right to marvel. As if we hadn’t been here for who knows how many geological epochs before they arrived, with their institutions of marriage and family, their twelve step meetings and Orgone Accumulators, their fertility clinics and internet dating and complicated inner lives, spooled out in innumerable confessions and autobiographies, as if they had something up on the rest of us with their eBooks and mark-making.

Our record is the fossil record. Our signature is definite.