A selection of useful tidbits of information and tricks for the marine aquarist submitted by Advanced Aquarist’s readership. Readers are encouraged to post them to our Hot Tips sticky in the Reefs.org General Reefkeeping Discussion forum or send their tips to terry@advancedaquarist.com for possible publication. Next month’s Hot Tip theme will be “Anemone Tips“. 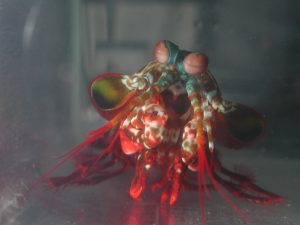 Mantis shrimp. Photo by Nicolas Will.

The only way I could get the one out of my tank was soda water.

I pulled the rock out the mantis was in and dumped a 2 liter of soda water over the rock.

The mantis came shooting out. I dipped the rock in old water change water and back into the tank it went.

The mantis went into his own tank. 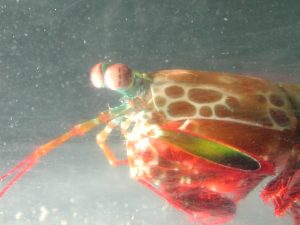 Mantis shrimp. Photo by Nicolas Will.

I just took the whole rock he was in and put it in a 5 gallon bowfront nano. Of course the rock was located on the bottom of all my rock in the 155 gallon reef.

Picked up the 5 gal from the fish store, it came with a hood and a hang on filter. Tossed in a heater, some old tank water, and a compact flourescent, a couple of mushrooms, and viola! Instant end table conversation piece.

I have also used this method. I had an idea of which rock the mantis was in and removed it from the tank and put it in an empty bucket. I used a turkey baster to shoot club soda into the holes in the rock. On the second hole the mantis shot right out. I put the rock back into the tank, and the mantis into a 5 gallon tank. Very simple and humane.

Yet another vote for the club soda method of eviction, except that I found that using a turkey baster to really flood the holes in the rock is the fastest way to get them to leave.