Interview and photography by Brett Bingman 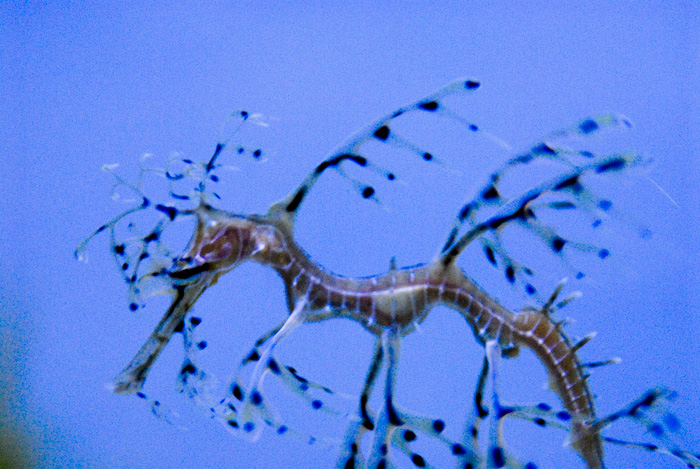 I travel for work and sometimes that travel happens around holidays. Sure, we’d all like to be with our families and friends this time of year, but sometimes circumstances dictate otherwise. This year I happened to be in San Francisco, California– not my home, but I can’t really complain.

Since I’ve been a member of many online forums through the years, I have friends around the country. Luckily enough for me, one of the guys I know in San Francisco happens to work at the California Academy of Sciences’ Steinhart Aquarium. I’ve known Matt Wandell for a bunch of years through www.reefs.org. I shot him an email and asked what day I should go to the aquarium. Matt was glad to show me around, and he even offered a behind the scenes look. We were discussing days and we figured out Christmas would be a great day. The aquarium was open, it wouldn’t be too crowded, Matt was working, and I had the day off work. There was a party scheduled for everyone at work, but let’s face it, do you really want to see the people you work with on your day off? 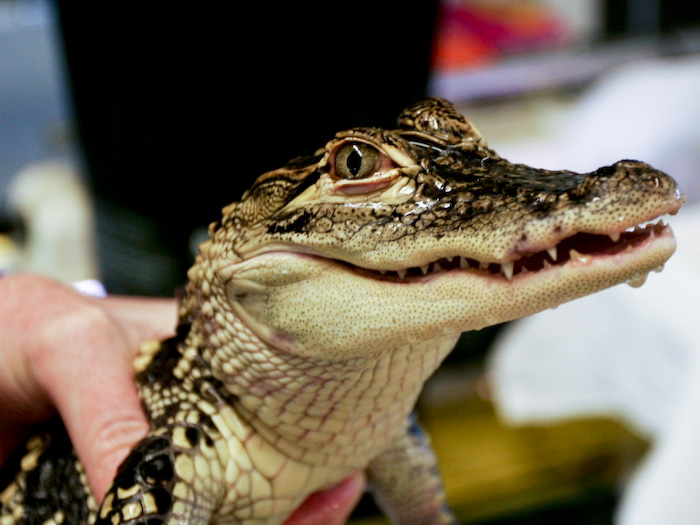 This Common American Alligator is one of the of many inhabitants of the aquarium.

So I accepted the offer, and my girlfriend and I went to the aquarium. She was in town visiting for the week, and she has a tank as well. I think she was more excited than I was to go. We arrived just as Matt was feeding the giant reef tank. After taking a minute to drool at the tank we started asking questions. 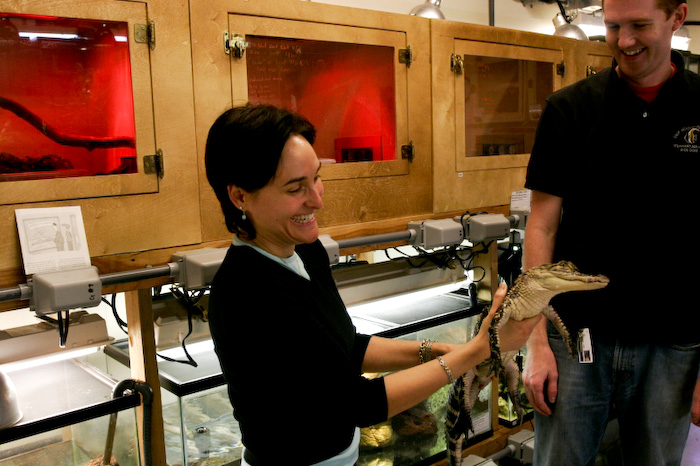 This isn’t exactly what I bargained for!!!

MW: I’m an Aquatic Biologist at The California Academy of Sciences.

RM: How long have you worked here?

MW: I have a BS in Marine Biology. I worked for UC Davis and the Bodega Marine Laboratory as an aquarist for 3 years, and I’ve been a hobbyist for 8 years.

RM: Tell us a little about how you got this position at the aquarium.

MW: I volunteered. It’s the most important way to get your foot in the door if you’re serious about working at a public aquarium. When a position opened up, I was one of 125 applicants and was offered the job. I couldn’t have possibly turned down the opportunity. 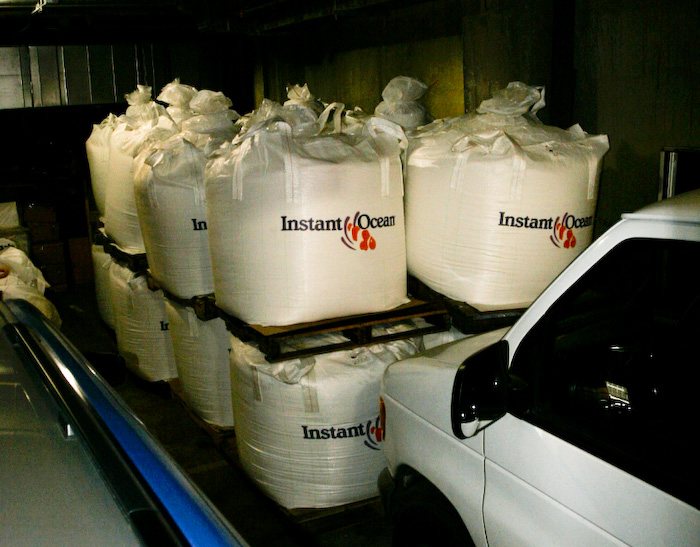 RM: What did you do before working at the aquarium?

MW: {Laughing} I tended bar, among other things. I owned an aquarium design and maintenance service, which was a great way to gain a lot of practical aquarium experience. It also paid for my addiction to setting up saltwater tanks in my home. 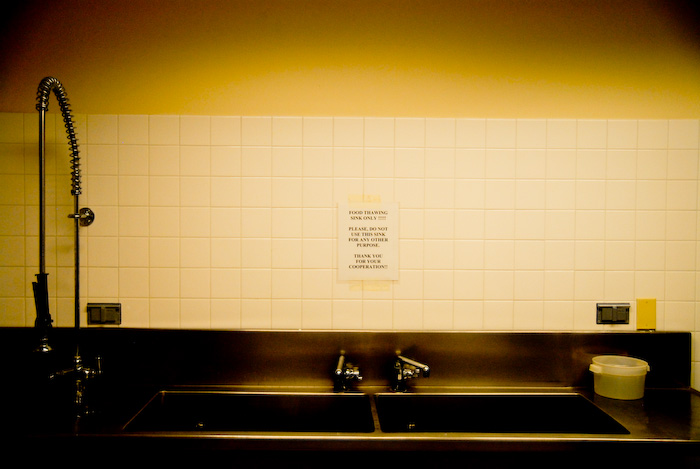 RM: What are your major responsibilities at the aquarium?

MW: My focus is on tropical saltwater animals, primarily corals. Right now we have about 55,000 gallons of tropical saltwater systems, and most of that is in coral reef type tanks. I feed the animals daily, do regular water changes, and maintain the life support equipment to keep the corals growing as fast as possible.

RM: What is your least favorite responsibility at the aquarium?

MW: Hmmm, well I find a sort of tranquility cleaning protein skimmer collection cups and scraping algae. I don’t know that I have a least favorite job here. 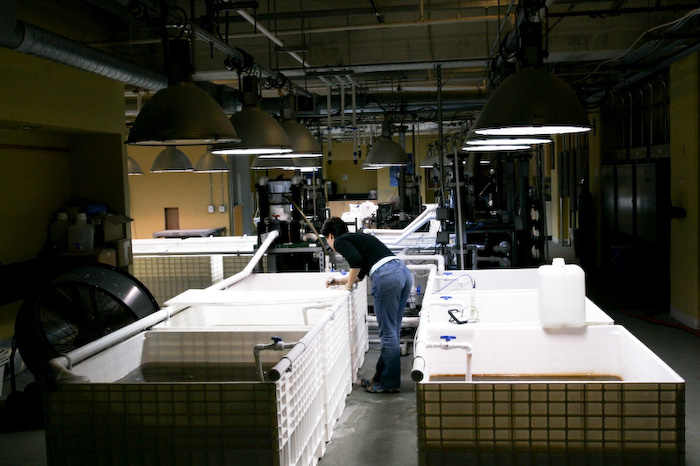 During the transition to the new facility, animals are kept in temporary holding tanks.

RM: The aquarium is in a glorified warehouse setting now. A new California Academy of Sciences is built in Golden Gate Park. What’s the best and worst thing about being in a temporary home?

MW:{Laughs} Hey, glorified warehouse? Ouch! Well, as great as this facility is in its own right, it is no comparison to the facility that’s nearly complete in Golden Gate Park. The Academy will be opening in late September of 2008 and even under construction it’s an amazing place. We’ll have a 4 story tall living rainforest with birds, butterflies, and reptiles, and one of the world’s largest coral reef tanks. My job focuses on the live animal aspect, but we’ll also have a world class planetarium and natural history museum. Right now we’re starting to get systems ready for live plants and animals. We’ll be moving our current collection of about 38,000 live animals and 20 million specimens to the park over the next 9 months. I expect most of it will be back breaking work, but I wouldn’t miss any of it. 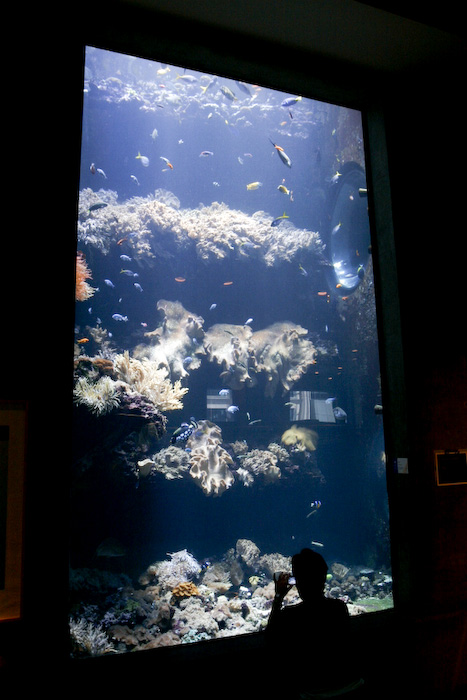 RM: This tank is deep for a reef tank. How many gallons and how deep is it?

MW: The tank we’re standing in front of now is the experimental prototype for our larger coral reef tank that we’ll open to the public later this year. It’s 20,000 gallons and 18 feet deep. One of the primary reasons for building this tank was to experiment with different lighting systems to achieve illumination strong enough to support coral growth in a tank over 20 feet deep. 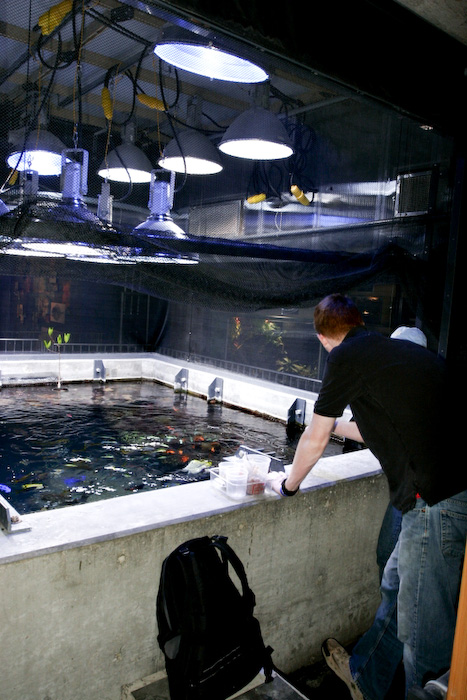 A view from a top the reef.

RM: How many types of fish and corals?

MW: There are 400 fish from over 100 species and approximately 100 different species of corals.

RM: Anything else really cool about it?

MW: This tank is built inside 2 floors of an old elevator shaft! The concrete was retrofitted, large acrylic windows were installed, drill a hole here and there, a pinch of salt, and voila, instant coral reef tank. 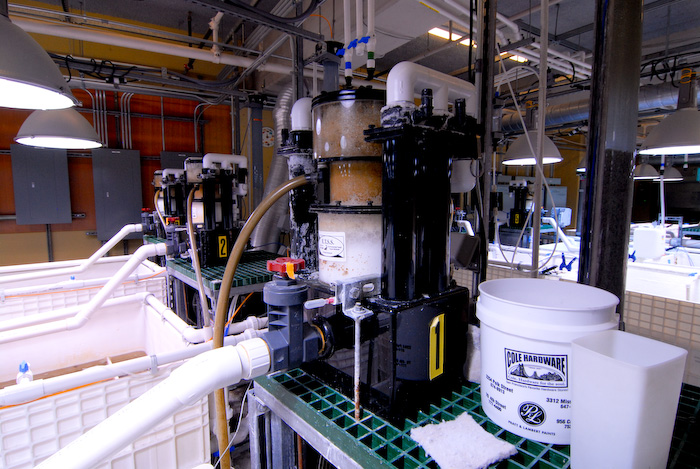 A view from atop the reef.

RM: Any really cool pieces of equipment for the gear heads out there?

MW: Well a lot of the life support devices are simply scaled up versions of the same types of equipment we would use on a home reef aquarium–we have large protein skimmers, calcium reactors, circulation pumps on closed loops, ozone generators, and controllers to automate it all. The 2 calcium reactors hold about 200 pounds of crushed coral media apiece. The 2 self-cleaning protein skimmers are 8 feet tall and about 5 feet in diameter, and they process the entire tank volume every 45 minutes. The sump can hold approximately 8,000 gallons of water when filled. The sand filters alone process about 30,000 gallons of water per hour. And of course, all this equipment is dwarfed by what we’re building at Golden Gate Park. 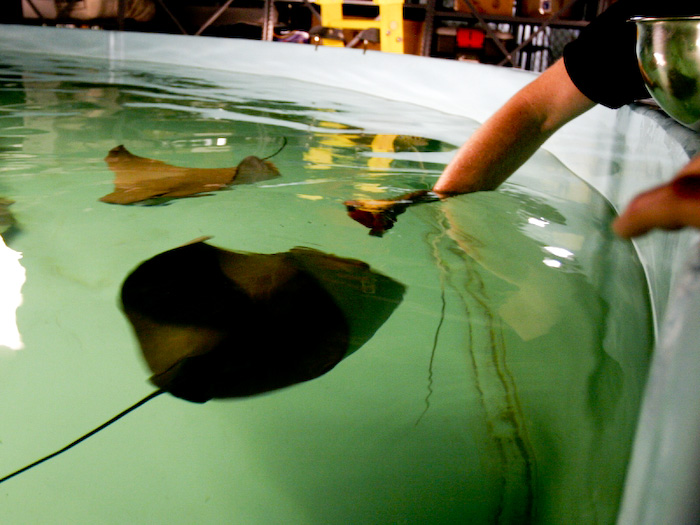 RM: Can you tell us what the reef tank will be like in the new aquarium? Did you have a hand in its design?

MW: One of the iconic tanks of the new California Academy of Sciences will be the Phillippine Coral Reef Exhibit. It’s a 200,000 gallon tank with over 4,000 fish, and at 25 feet deep it will be the deepest living coral display in the world. There are over 120 one thousand watt metal halide lights over the tank so that we can punch light down to the deepest portions. It will be separated into biotopes, so you’ll be able to view a mangrove forest with juvenile coral reef fish, a lagoon with sting rays and soft corals, and a sloping fore reef with a mix of hard and soft corals, sea anemones, and lots of fish. 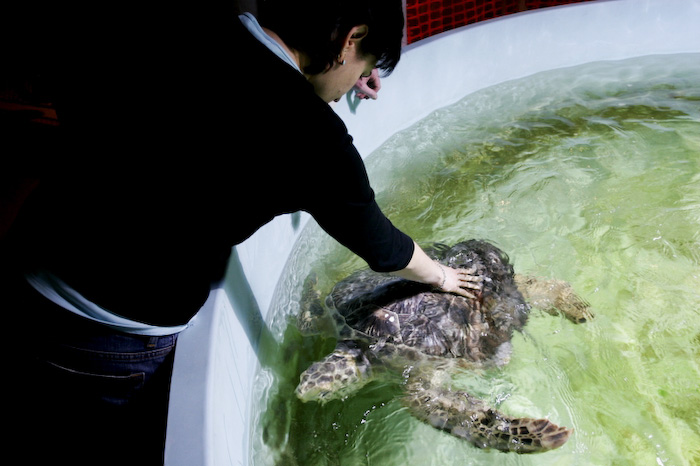 RM: Can you tell us about the sea turtle?

MW: Absolutely! Our green sea turtle has been with us for 4 months now and is quite the favorite among the employees at the Academy, as well as with visitors.

RM: Where did the Aquarium get him?

MW: He was born and raised at Sea World in San Diego about 4 years ago.

MW: The biologists who transported him here decided that he should be named “Diego” in honor of his home city, and the name stuck.

MW: Diego is known as Chelonia mydas for those with a Latin persuasion.

RM: What do you feed him?

MW: Diego gets a mix of terrestrial vegetables, raw seafood, and a pellet diet formulated specifically for this species. Green sea turtles are largely herbivorous, so he only rarely gets a bit of squid or shrimp as a treat.

RM: Will it get it’s own display in the new aquarium?

MW: Diego will be a part of the reef lagoon section of the Phillippine Coral Reef Exhibit. He’ll be housed with several stingrays and small sharks. 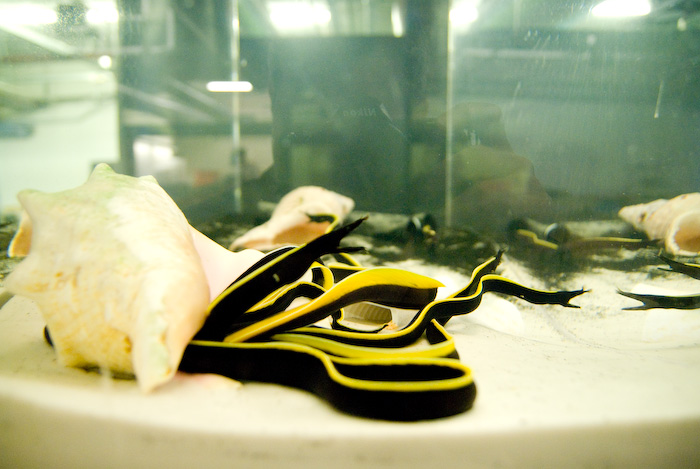 RM: If you could interview any animal in the aquarium, which would it be and what would you ask it?

MW: Hmm, I’d probably ask the stonefish how it passes the time just sitting there all day long. It might be useful info for long plane rides.

RM: It’s Christmas, and you’re here. How do you feel about spending a major holiday working?

MW: The animals never take a day off, so there’s someone here making sure everything is running smoothly 24 hours a day, 365 days a year. I celebrated Christmas with my family a few days early this year, which is a small price to pay for the unique and fortunate position I’m in. 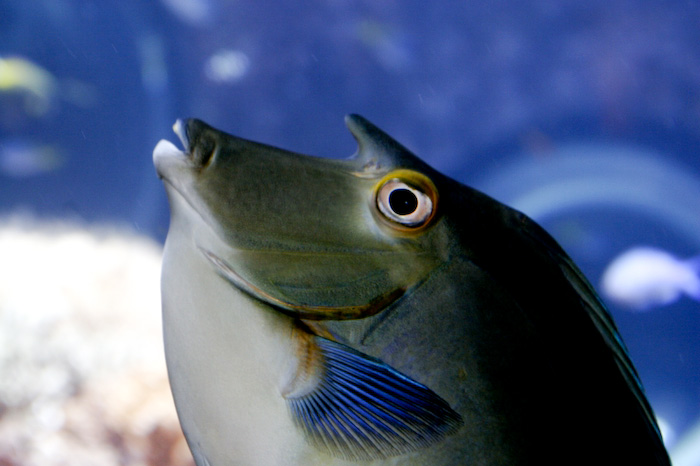 One of the many reef tank inhabitants.

MW: In 1985 I was given a green and orange Big Wheel with the streamers on the handlebars. I don’t know if any present can beat that.

RM: Thanks for the time and the tour. 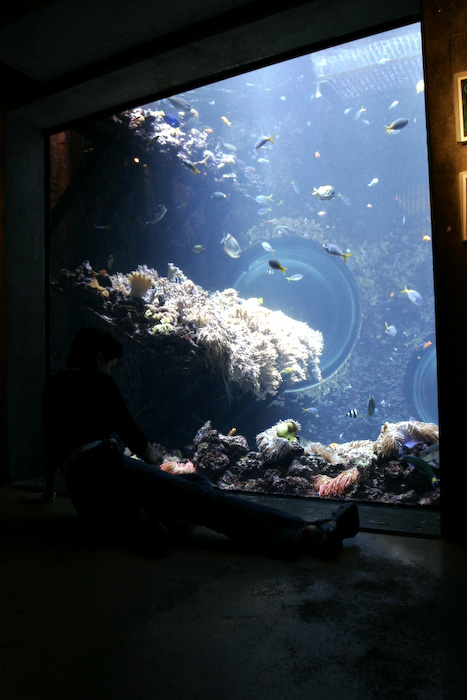