Interview with the Aquaculture Professor: Dr. Michael A. Rice on Bivalves in the Aquarium 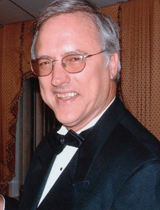 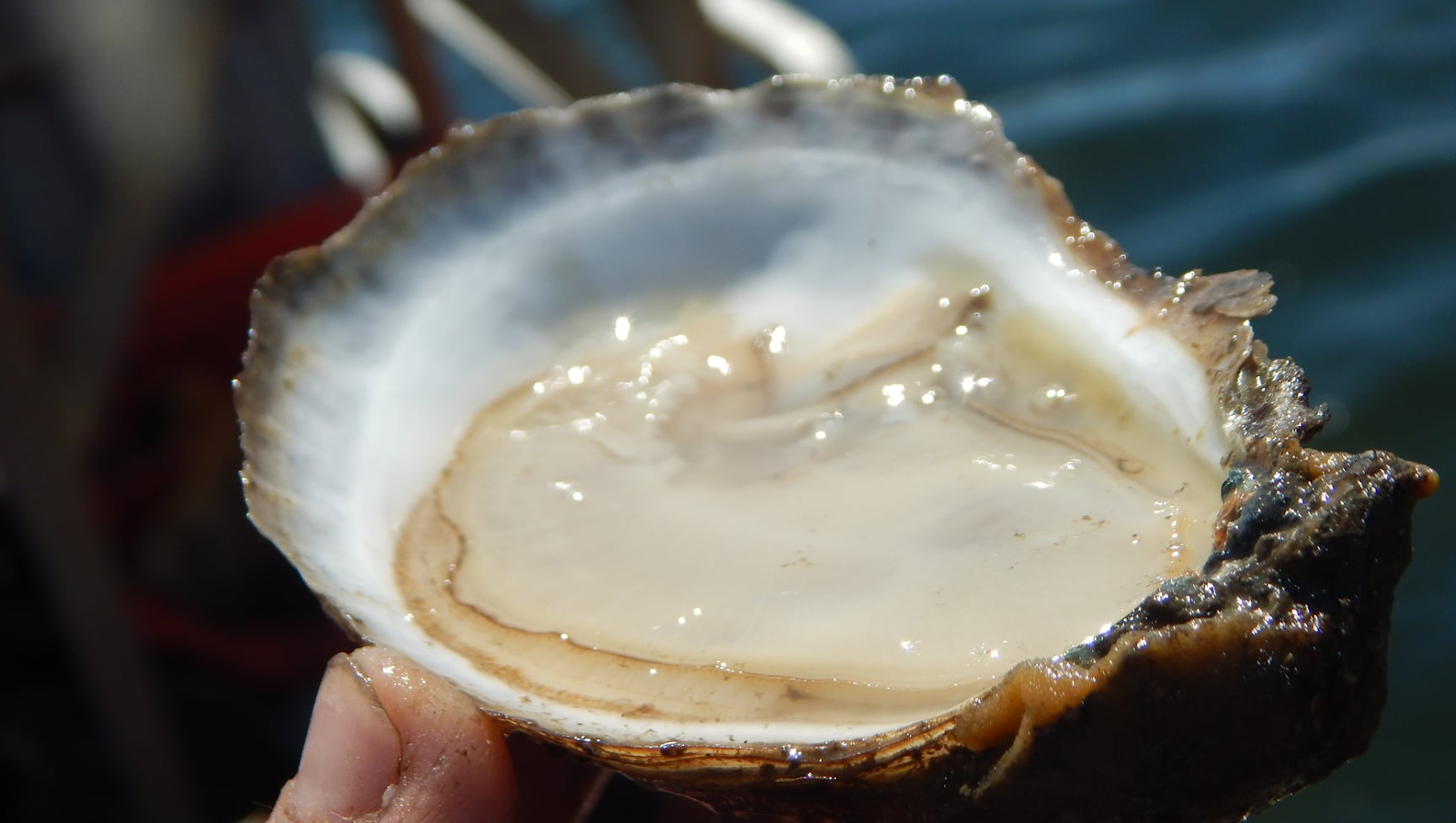 Q: Will you please introduce yourself. How did you enter the world of aquaculture, and what are your research interests?

A: From 1973 to 1977, I attended the University of San Francisco as an undergraduate biology student and took up an interest in marine science. As an undergraduate at USF, I took part in surveys of abalone populations along the Northern California coast and participated in a monthlong field course in Baja California, Mexico in which I first studied marine invertebrate species along the entire length of the Gulf of California (or Sea of Cortez). This was an extraordinary interssession course in 1976 designed to be a combined field biology and history course. I recall that my two ‘go-to’ textbooks were John Steinbeck’s Log of the Sea of Cortez and Richard Brusca’s Common Intertidal Invertebrates of the Gulf of California. If I were to pick an experience that set me started on my career pathway, it would be this one.

I entered graduate school at the University of California, Irvine in 1977 where I studied the role of dissolved organic matter, such as amino acids at low concentrations in seawater, can serve as a supplementary nutrition source for most marine invertebrates including bivalve mollusks. After completing my master’s degree in 1981 focusing on amino acid uptake by oysters, I spent 3.5 years in the Philippines working for the Philippine Bureau of Fisheries and Aquatic Resources as a Peace Corps Volunteer where I worked on means to improve the sanitary quality of farmed oysters prior to marketing, and assisting in the development of floating cage culture methods for the aquaculture of tropical sea basses and groupers. After returning to UCI in 1985, I continued on with my doctoral studies. My Ph.D. dissertation research focused on the amino acid transport process in oysters, mussels and hardshell clams (known locally in Rhode Island as quahogs).

Three months after my graduation from UCI in 1987, I was hired as a faculty member at the University of Rhode Island where my research has focused on improving aquaculture methods of molluscan shellfish, and I have been involved in aquaculture extension programming in Rhode Island, nationally and internationally. 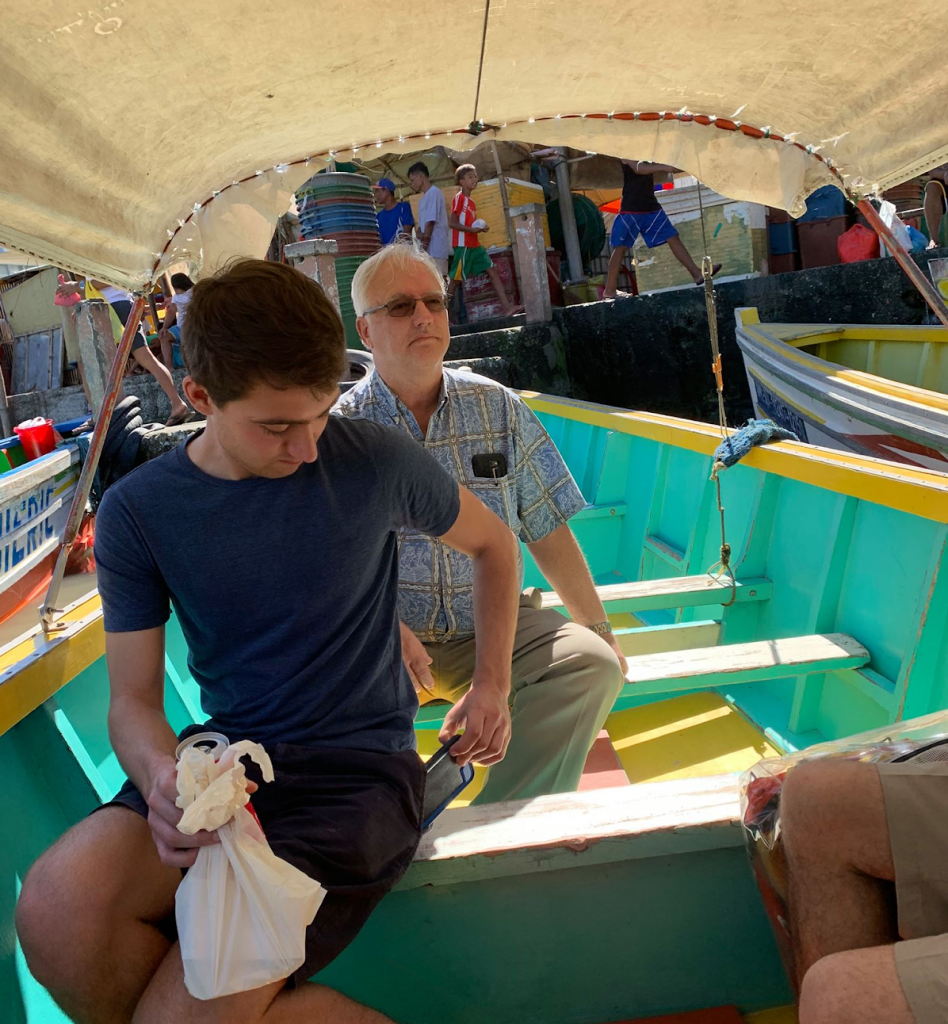 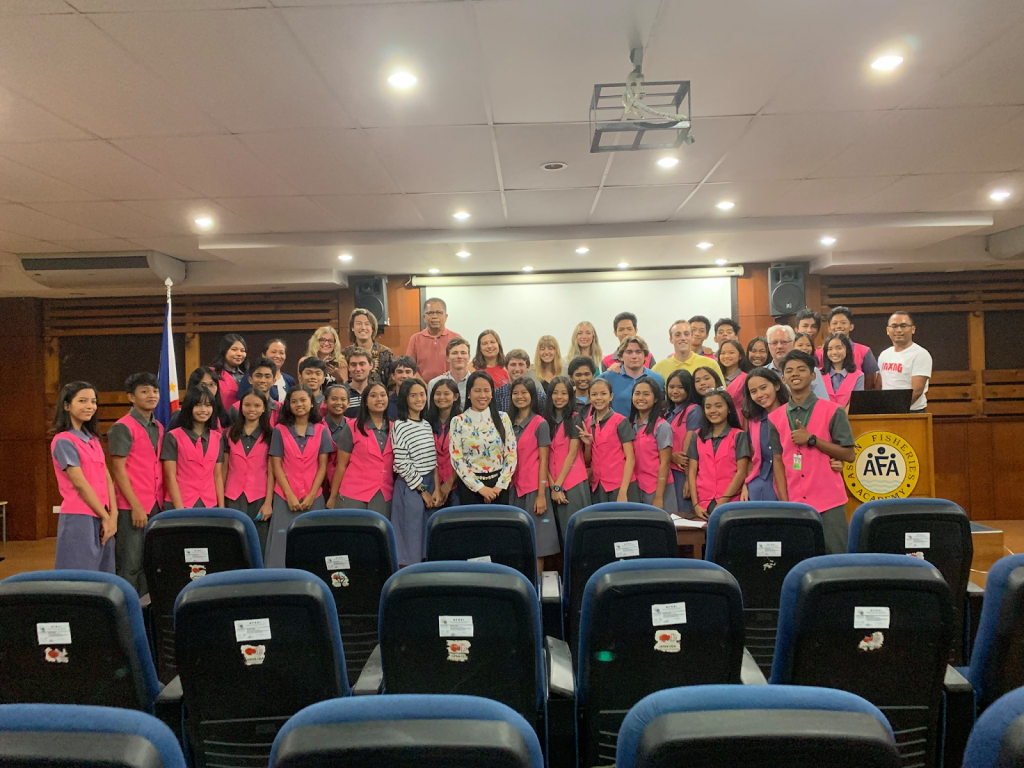 Dr. Rice has led several cohorts of University of Rhode Island Students to train in the aquaculture techniques of the Philippines. Students taking this course are educated on the aquaculture of rabbitfish, milkfish, groupers, snappers, sea cucumbers, abalone, penaeid shrimp and oysters amongst many others.

Q: Will you explain how shellfish conduct biofiltration and how this may potentially be applied to aquarium and aquaculture production systems?

A: Economically important bivalves such as oysters, mussels and quahogs are filter-feeders that possess a filter-feeding organ called a ctenidium that simultaneously creates a water current that causes water to flow into their body cavity, and creates plenty of mucous that traps small particulates in the seawater such as phytoplankton or small detritus particles that serve as their primary food source. The mucous strings with trapped particulate food particles are then ingested by the bivalves. Importantly, this filter feeding process is optimized for the utilization of particulate foods at concentrations that might typically be found in the natural habitats of these bivalves. The filter-feeding process is overloaded if one might try to ‘force feed’ the bivalves with phytoplankton concentrations above their ability to filter and ingest. Uningested excess particulate food is ejected by bivalves as mucous coated paste called pseudofeces. This production of pseudofeces by bivalves in aquaculture or aquarium systems can be considered as wasteful and an undesirable source of organic loading that could cause costly water quality issues that may be costly to mitigate.

Q: What are the major difficulties associated with keeping shellfish in captivity and how might those be resolved?

A: The biggest problem associated with keeping filter-feeding bivalves in captivity is in the management of the rate of phytoplankton food delivery to the aquarium. Typically the phytoplankton cell density should be held in the range of 20 to 60 thousand cells per mL of aquarium tank water as the optimum concentration for bivalve feeding. It is relatively easy to culture phytoplankton in dedicated cultures with 5 million cells per mL or higher, and periodically add phytoplankton to the tank as the shellfish clear the phytoplankton by way of their filter-feeding. The problem with this batch feeding method is that typically an oyster or mussel may be filtering water at a rate of 2 to 4 liters per hour. A 40 gallon aquarium is about 150 liters in volume, so on average a single oyster or mussel can clear all the phytoplankton from the tank in about 2 days. Put another way, fifty bivalves can clear the 40 gallon tank of phytoplankton completely in about an hour. One method to supply phytoplankton to a tank at an acceptable rate might be to use a peristaltic feeding pump typically used for biomedical applications, but this would require considerable effort to make the adjustments to get the phytoplankton infusion rate optimized.
Tropical tridacnid clams are popular bivalves to keep in reef tanks, and they are filter feeders very much like the oysters and mussels. The important difference is that the tridacnid clams have within their soft tissues symbiotic phytoplankton called zooxanthellae that act to make the clam tissues green, brown, blue or other colors due to photosynthetic and accessory pigments. These symbiotic zooxanthellae serve to provide supplementary nutrition directly to the tridacnidae and reduce their need for a constant externally supplied food supply. 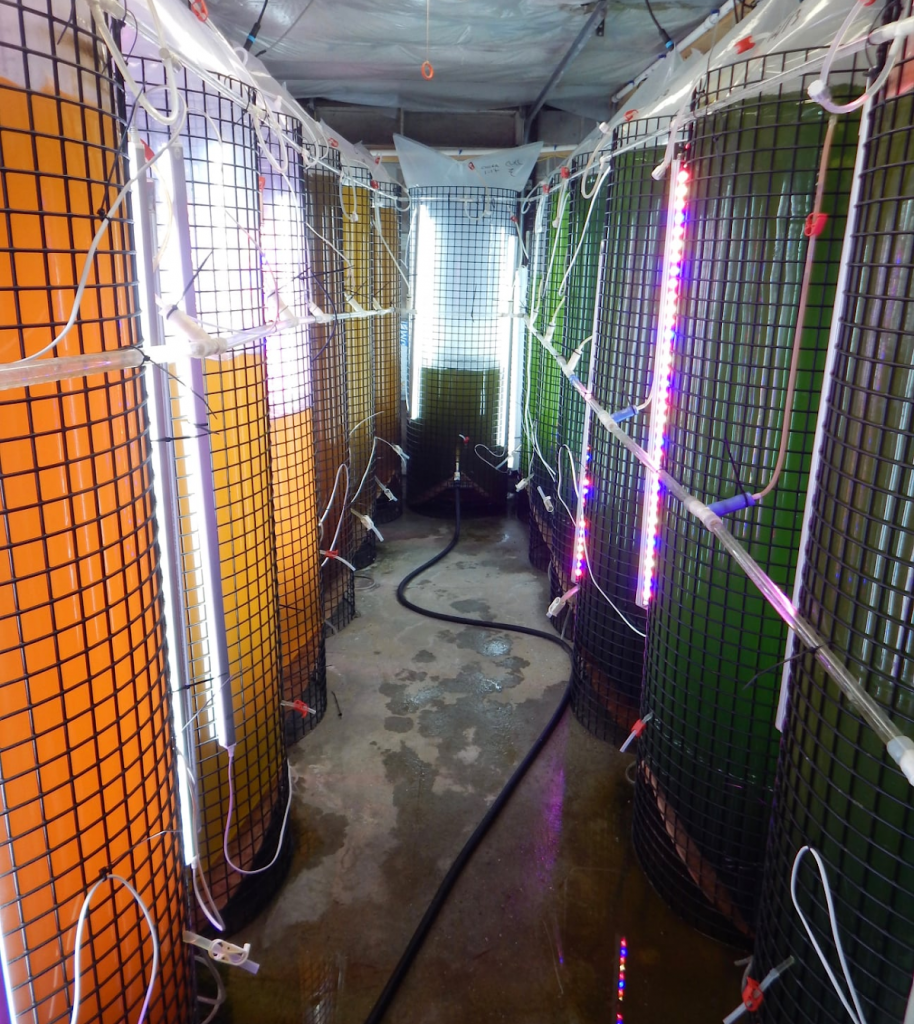 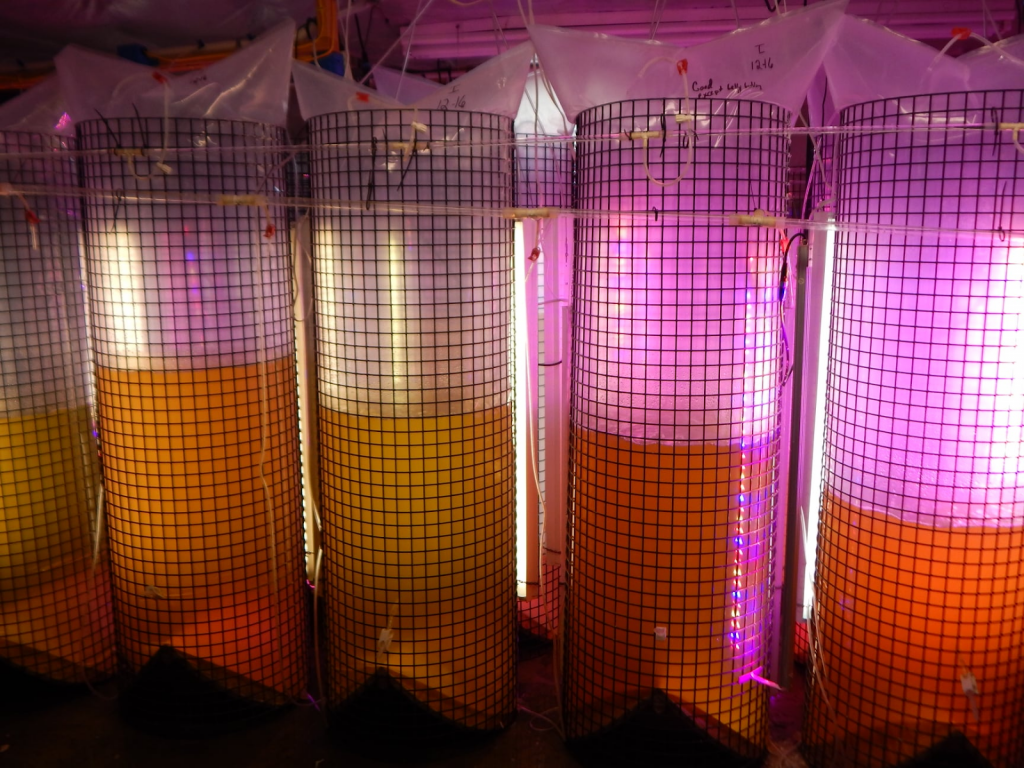 Q: It has become more popular for reef aquarium keepers and public aquarists to utilize macerated oyster meat/gametes as a feed source, do you think there is significant nutritional benefit to this?

A: Macerated oysters and oyster gamete suspensions are a highly nutritious food source that is high in protein and have a good profile of essential fatty acids to promote good health in aquarium fish. A good place to find food quality data is in the US Department of Agriculture website. Data about nutrients associated with oyster meats can be found at: https:// fdc.nal.usda.gov/fdc-app.html#/food-details/174219/nutrients 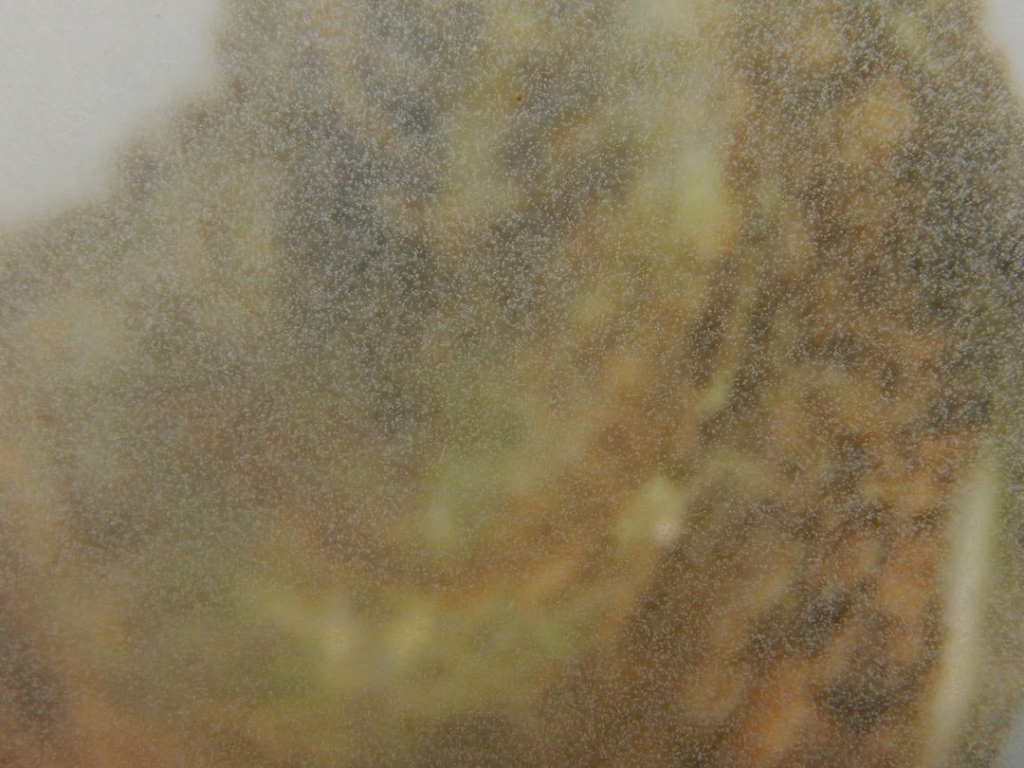 Q: Many public zoos and aquariums have oyster reefs and clam bed exhibits yet rarely house live shellfish. What are the overarching educational benefits of such exhibits and how might they be enhanced by the display of living clams, oysters etc.?

A: It is very common for public aquariums to have static oyster bed or clam bed exhibits that might be alongside much more active live fish aquarium displays or reef tanks. Such displays do have an important role in public education and promotion of an ethic of marine conservation. If a public aquarium facility is close to the coast, they may have the option of physically pumping phytoplankton-laden seawater from the sea into raceway tanks to hold shellfish. The number of shellfish that could be held in the tanks would depend upon the rate at which water could be passed through the raceways. A drawback of this flow-through method of holding shellfish is that a water discharge permit might be required by the local water pollution control agency. The difficulties of holding shellfish in closed or semi-closed aquarium tanks or aquaculture tank systems are previously discussed above.

Q: Do you think shellfish aquaculture farms can/should sell the bycatch (fish, shrimp snails etc.) of their operations to the aquarium industry?

A: Bycatch from shellfish aquaculture farms may be a good source of aquarium stock, but there is a need to analyze the markets and develop the supply chains. Some important tropical reef fish with iconic status due to their interesting coloration or relative rarity can command rather hefty market prices that support market supply chains that stretch halfway around the world to places like Indonesia, the Philippines in the Coral Triangle, or the Great Barrier Reef of Australia. Local shellfish aquaculture bycatch with relatively drab coloration might not command as high a price as the exotic tropicals, but ‘buy local’ marketing campaigns might build demand among the most eco-conscious of aquarists. 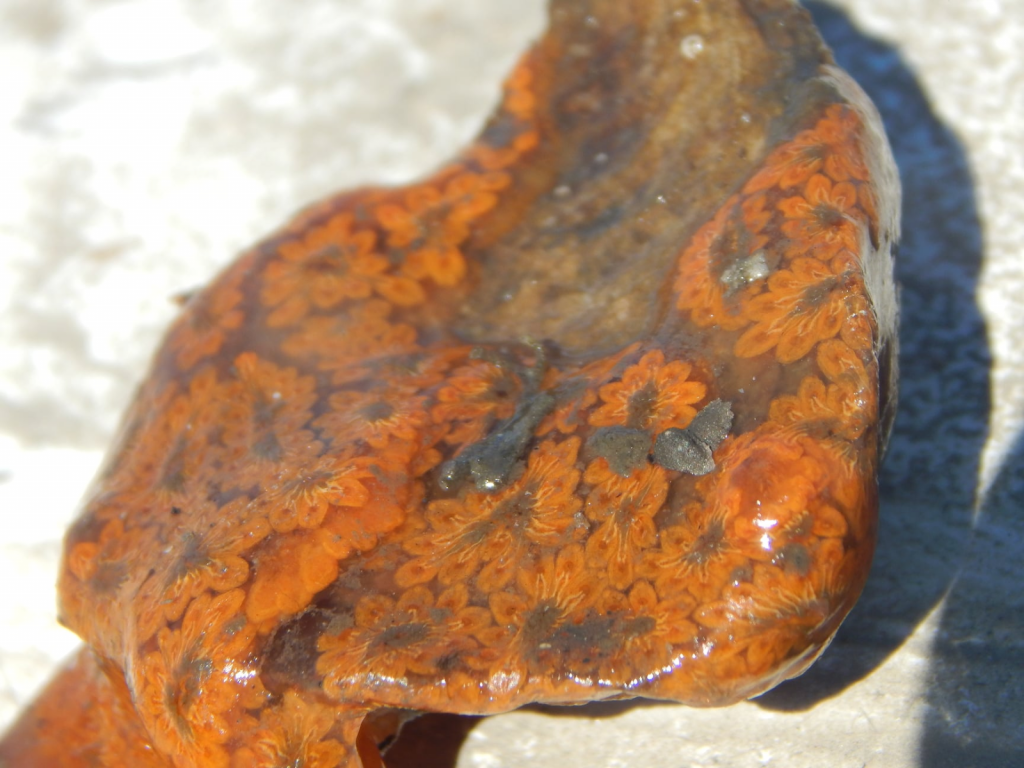 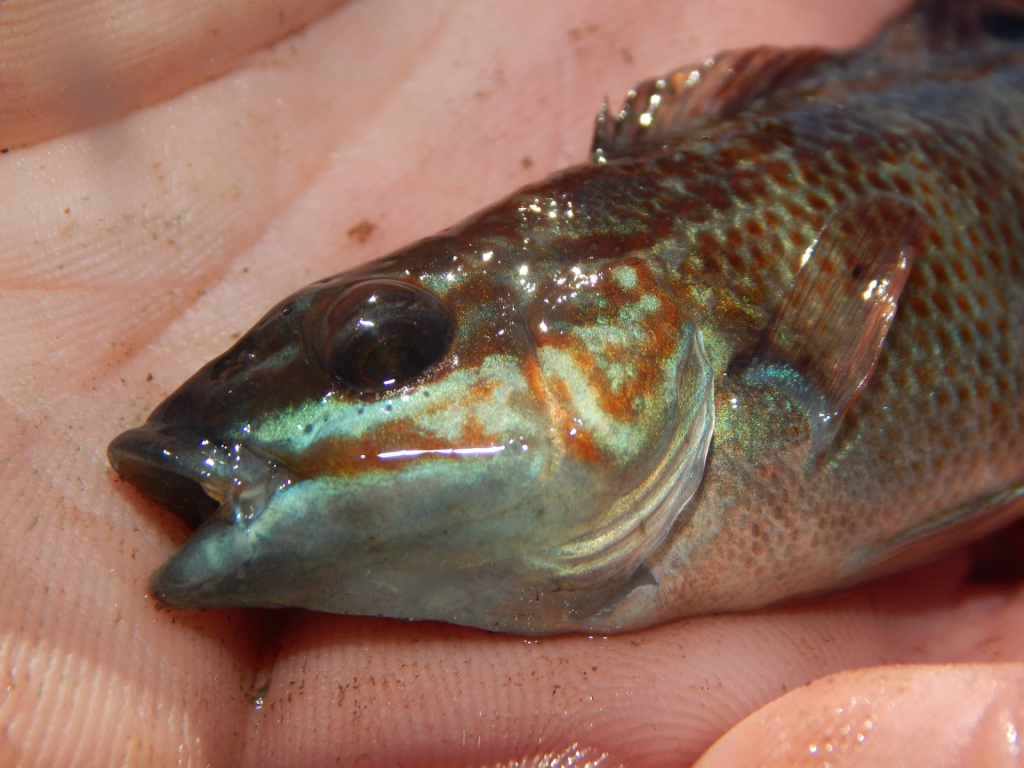 Q: Do you think cleaned oyster and clam shells could be used as functional ‘live rock’ in a coral reef aquarium?

A: Oyster and clam shells as an addition to aquarium tanks might serve as a functional “live rock.” One function the shells do serve in an aquarium tank is that they can be a source of calcium carbonate to maintain calcium hardness and alkalinity levels in the water over extended periods of time. In some locations, soft water with low levels of calcium hardness or carbonate alkalinity can be subject to acidification as fish and other organisms in the tank respire and produce carbon dioxide. The shells act to promote buffering of these carbon dioxide-induced pH shifts in the tanks. 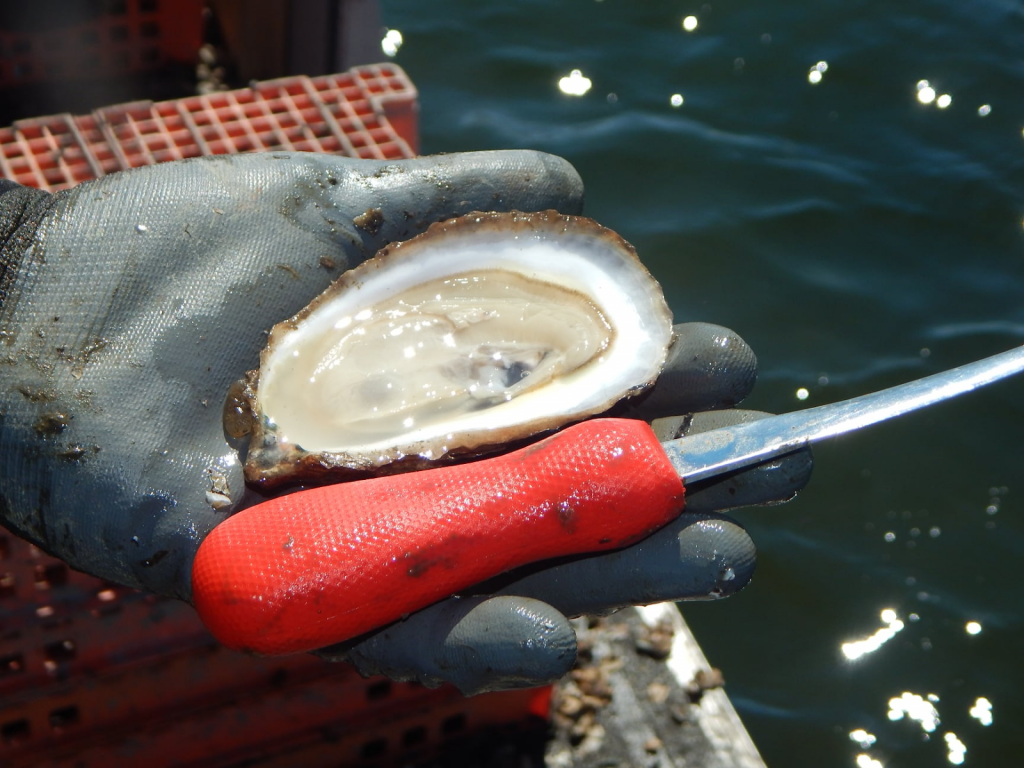 Both wild oyster reefs and farms are attributed to improved water quality and increased biodiversity. 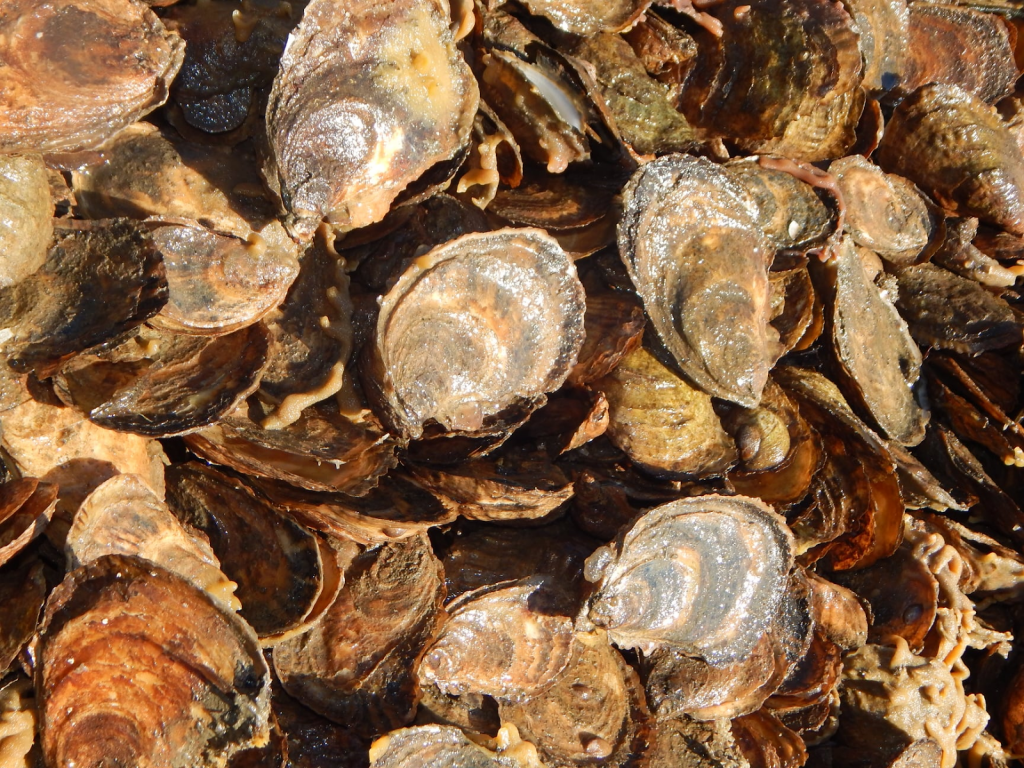 Q: Could shellfish eggs and larvae be used as a live feed for aquaculturing corals, reef fish and reef invertebrates?

A: Yes! There is a growing niche market in the growing and sale of oyster larvae for environmental restoration and commercial aquaculture purposes. The growing availability of bivalve larvae for sale could be a novel source of live feeds for aquarists as an alternative to brine shrimp (Artemia) or rotifers such as Brachionus. An example of a producer of oyster larvae for sale is the Ward Oyster Company in Gloucester, Virginia. https://wardoyster.com/eyed-larvae-oyster-seed/ 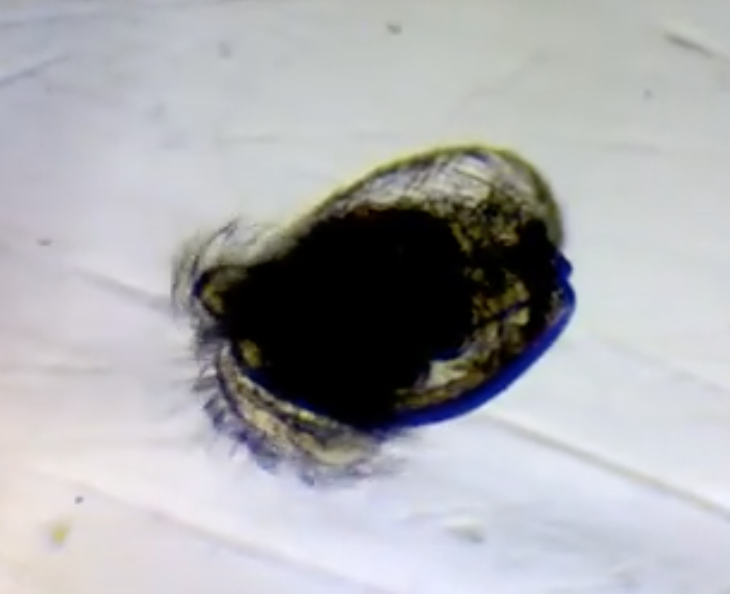