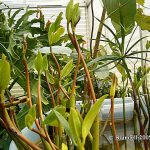 Hypothesis: Given the fibrous texture, large root system, and solid structural plant tissues of mangrove plants; they should contain and remove more nutrients than macroalgae species in the home aquarium.

Currently reverse daylight photosynthesis and refugia are quite poplar. It is common practice to install and utilize the nutrient uptake properties of macroalgae in these setups. More recently a push towards the addition of mangroves has come to fruition. Mangroves are considered to be excellent for nutrient uptake. In addition they have other beneficial aspects of macroalgae including: stability (do not dissolve during reproduction), lack of toxic chemicals, require less space to grow, provide physical structure for other organisms, and remove rather than recycle nutrients. Macroalgae also have a list of benefits over mangroves including: provide a matrix for micro crustaceans, recycle nutrients, aesthetic appeal, ease of harvesting, and quick growth rates. 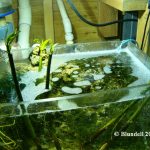 The purpose of this study was two fold. First the investigators wanted to compare the dry weight (representing Nitrogen and Phosphorus uptake) of mangroves and macroalgae. Second, the project was designed to make in-exact measurements of nutrients, with an emphasis on useful comparisons and terminology for home hobbyists. 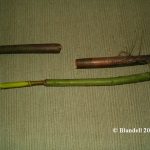 Several studies have focused on the limits of algal growth in reef systems based upon Nitrogen and Phosphorus uptake (Rosenberg and Ramus 1981, Rosenberg and Ramus 1982, Lapointe et al. 1987, Littler et al. 1991, Lapointe et al. 1992, Smith & Buddemeier 1992, Fong et al. 1994,). A very noteworthy and important study in this field analyzed the ratio of Nitrogen and Phosphorus in algal tissue (Larned 1998). These studies are the basis for several projects which followed, and were conducted by this project’s author (Blundell 2003). Previous studies in the captive systems and on reef systems have been difficult to follow or of little use to home aquarists. On main reason for this is that studies often use measurements of grams/day or grams/linear inch or dry weight/square meter which are too difficult to apply to home aquariums. This project was the author’s attempt to fix this conundrum.

The investigators asked for algal donations and mangrove donations from a local hobbyists club. Donors were then instructed to provide exactly one handful of algae. While this may sound scientifically poor, it appears to be a very universal term. Therefore actual data figures are estimates, but generalizations can certainly be made. 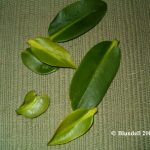 After this time the pouches were allowed to cool and were then weighed again. This allowed for a calculated measurement of dry mass. The contents of each pouch were then removed and weighed separate from the foil pounces (which were also weighted again as controls). The calculated weights were compared with actual weights of samples, and were identical within 1 grain. 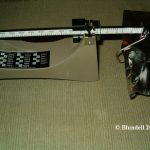 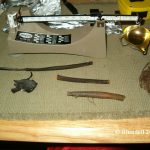 In this study we have found that one handful of Chaetomorpha sp. and Caulerpa serrulata contain 5.7 grams and 2.59 grams of dry weight mass respectively. On mangrove plant (of a length of 43cm/17in with six leaves) weighed 10.3 grams of dry weight. If a home aquarist were able to grow one handful of macroalgae in their sump each month, this would equal 34.2 grams (for Chaetomorpha sp.) and 15.54 grams (Caulerpa serrulata). This would correlate to growing 3 entire mangrove plants and 1.5 mangrove plants during that time in that aquarium!!! That kind of algal growth is common, but that kind of mangrove growth is unprecedented. Therefore our hypothesis was wrong and disproved in this study. The author’s viewpoint following this study is that mangrove plants may be useful to aquariums but in terms of nutrient uptake they are far inferior to macroalgae growth. 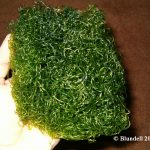 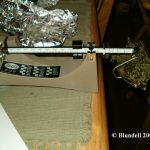 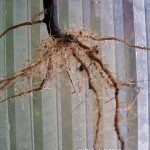