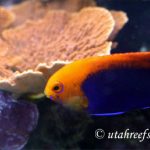 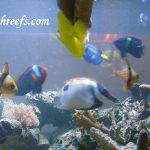 During the past few years I have had several wonderful opportunities for filtration discussions. These discussions have encompassed a wide array of view points and individuals. One major filtration item is often neglected in literature and conversation. That item or theme is consumption.

For many aquarists the fish are the reason for having an aquarium. Feeding time is often a popular place for aquarium fish but it is also the source of nutrients and compounds which can be problematic for the home aquarium. 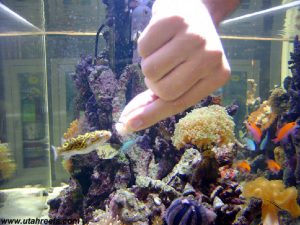 Shown here a brackish water is being hand fed in a reef aquarium.

Consumption is a term used in aquarium filtration to describe the process of removing compounds as they are consumed as a food source for something else. Simplified- something filters the water by eating something else. This type of filtration is sometimes referred to as Assimilation Filtration as the organisms assimilate organics into new tissues and growth. Depending on how wide of a scope you make the boundaries for this method, this is potentially a very important and dominating form of aquarium filtration. For the purpose of this article I’m going to describe the two big sets of Consumption Filters.

The Clean Up Crew 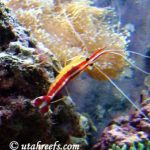 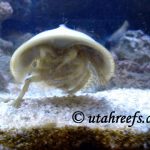 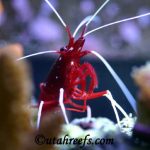 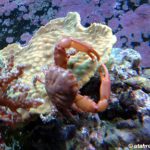 A clean up crew is widely known and understood. In fact they exist for the simple purpose of keeping the aquarium clean. It is very rare you find the hobbyist who buys snails or crabs in an effort to recreate the biotope of their particular aquarium. Instead these items are nearly always purchased for a filtration purpose. Clean up crews contain (but are not limited to) the following: hermit crabs, snails of all varieties, microcrustaceans, ornamental shrimp, bristle worms, emerald crabs, clams, sponges, urchins, and sea stars. I have a little saying for these animals that goes “you don’t buy them for their aesthetics you buy them for their athletics”, referring to their ability to get the job done. Since this form a filtration is well understood by advanced aquarists I’ll move on.

Shown here are a few examples of the many, many animals found living in home aquariums as they help to clean their captive homes. 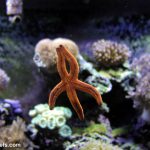 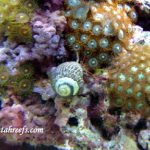 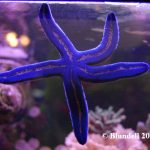 I’m using this division to include all the fish, pretty corals, pretty clams, and anything else you have which require feeding. This set of filters is rarely discussed for that simple reason; they require food. If they require food, and you add food (nutrients) to your aquarium, then it may seem counterintuitive to think of them as filters. Instead we typically assume that their presence requires more filtration. Indeed tha 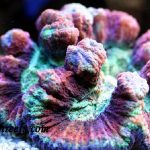 t usually is the case. Are you lost yet? Good, lets move on. 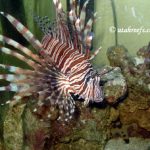 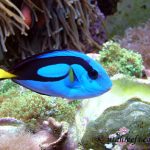 Many animals in the aquarium need to be fed to live. They survive by more or less taking food and nutrients from the water and ingesting it into their system. They in tern use much of this food to sustain life. That short description is my definition of metabolism. They then produce waste. However you could say they don’t produce any waste, they simply prevented some of the food from becoming waste, and let the rest go on as it otherwise would have on its own.

Some of our tank inhabitants need to be regularly fed. This feeding will often times require more filtration to keep the aquarium environment clean and healthy. 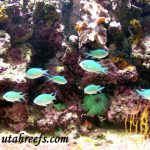 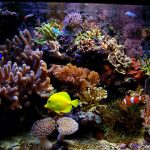 There are numerous articles on fish metabolism. I find them all fascinating and educational. Rather than provide details and figures I’m going to give the readers an analogy. It is safe to say that while you are reading this today you weigh the same amount as you weighed a week ago. However, during the past week you have eaten dozens of pounds of food. You also produced waste during that time. The waste of course is less (by weight, or calories, or nutrients, or etc.) than the food you started with. It could be said that during the past week you have used your body to filter all the nutrients and compounds that were in your refrigerator. Had you not eaten during the week the food in your refrigerator would have broken down, decayed, and polluted your kitchen.

For over ten years now I have been obsessed with a small passage from the giant Marine Atlas (Baensch & Debelius, 1994). Written as a small and obscure point in that book I found something quite profound. In this great book there resides a hidden sentence which reads “A teaspoon of flake food can spoil a 100 l aquarium in one day” (Baensch & Debelius, 1994 pg 16). In other words one teaspoon of flake food could destroy a 30 gal tank in one day, or a 180 gal tank could be destroyed in less than a week if you were to feed one teaspoon of flake food per day. This book does a wonderful job of explaining these claims and provides calculations for toxic compounds produced for average feedings. However, we all know this doesn’t happen. And we all know the reason the tank doesn’t become a toxic soup… the foods are eaten. For if the foods were not eaten the aquarium would quickly become eutrophic. 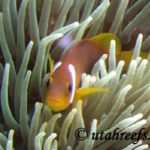 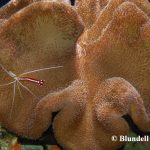 To sum that up- we feed our tanks in an effort to pollute the water with nutrients. We do this so our fish, corals, clams, shrimp, urchins, anemones, etc., can filter the water and feed. That is how they live, by filtering the water.

While a healthy aquarium may require feeding and added nutrients, the tank inhabitants greatly contribute to the filtration of those compounds.

The act of feeding an aquarium produces a greater need for filtration. However the reason for feeding is often times to satisfy the needs of particular animals. These animals are themselves serving in a way to help filter the aquarium as they consume the provided foods.

I’d like to thank my wife. A few months back she and I were discussing aquarium filtration. She made comments stating that most filtration articles and presentations neglect the role of consumers. She indeed was correct. For that reason I decided this topic was worthy of an article all its own.