The last article reported test results on some LED fixtures [http://www.advancedaquarist.com/2010/2/aafeature2] and their comparison to other lighting technologies. This article continues in the same vein and presents results on lighting output for some more LED fixtures available in the market. Table 1 presents a list of the LED lighting fixtures reviewed in this article. Each of these was tested using the same set up as my previous reflector tests, using a 3’X3′ grid with a spacing of 3″ in the X,Y direction. The fixtures were centered on this grid, and PAR was measured as PPFD (Photosynthetic Photon Flux Density) in micromoles/m2/sec using a LICOR 1000 data logger and a LI-192SA underwater cosine corrected sensor calibrated for both air and water. The data logger was set to average 5 readings for each data collection point. The data was imported into Microsoft Excel for analysis and the data was plotted to display the light spread and intensity at various distances. 4 plots of the data with 2 plots at each distance were generated showing:

While PAR values are are not the only things that we should be concerned about when purchasing an LED fixture, they are certainly the first criteria that must be met when selecting any lighting system. Additionally, more specifically with LED systems there are a host of other criteria that must be considered. While these criteria are more subjective and easily swayed by user preferences and values, this article focuses primarily on the light output and distribution.

Aqua Illumination LEDs are designed as a modular concept, with a basic module comprising 24 LEDs in the ratio of 2 Whites: 1 Blue. 16 CREE XPG White and 8 CREE XPE Blue, with custom designed light collimators are used in each module. A single 12″ module was tested. For lighting a typical tank multiple modules can be easily configured using the rail mounting system. For detailed specifications of the LED fixture and its special features refer to the manufacturer’s website (http://www.aquaillumination.com/). This LED fixtures comes with a controller featuring a USP port for firmware upgrades, allowing the user to upgrade the software with latest control features. In the auto mode it provides the ability to control the intensity of blue and white LEDs separately, allowing for automated sunrise/sunset and lunar cycle simulation. The manual mode allows setting the blue and white LEDs at different intensities, but these are static and not controlled. 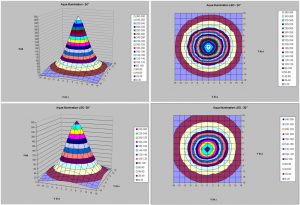 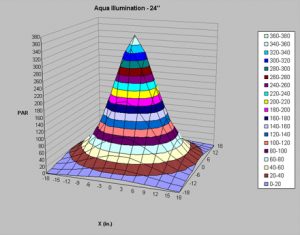 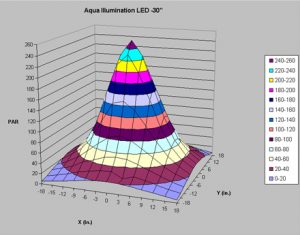 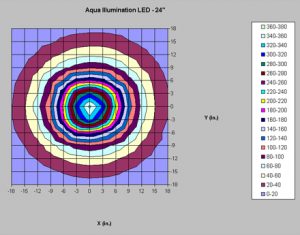 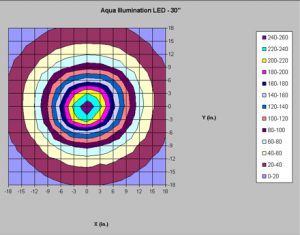 The Eco-Lamp KR-91 is the low power LED sibling of the KR-92 reviewed in the previous article. The unit tested here is the 30″ version of KR-91. It has 2 outside rows of white LEDs with 144 LEDs in each row, and a central row of 132 blue LEDs and 2 LEDs for moonlight. It has the same sleek and slender look as the KR-92 with the same controller. The controller allows the user to select between the option of having all lights on, only blue lights on, moon lights, and all off and setting the clock for these events. These lights come with a tank mount that mounts on the side rim of the tank and allows the lights to be “flipped” open to allow access inside the tank. It also comes with a ceiling mount kits with all the hardware needed to install it. 2 blue LEDs provide the moonlight, which has an automatic pre programmed lunar cycle that adjusts the intensity over the days of the lunar cycle. 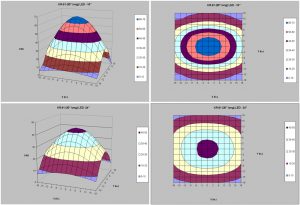 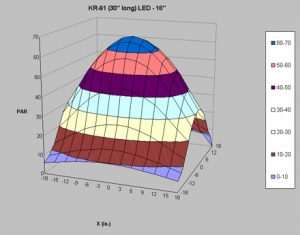 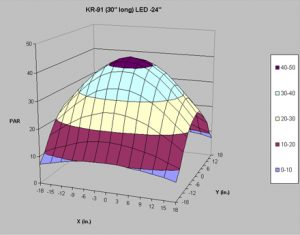 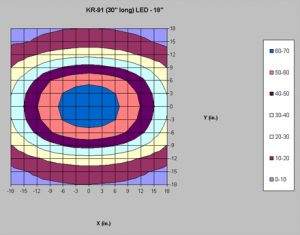 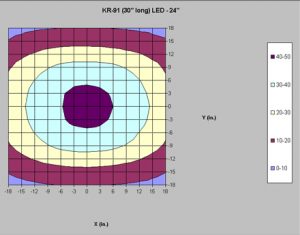 The Blue Moon Aquatics (http://www.bluemoonaquatics.com/) LED fixture tested is the 90W model which has 60 white 15,000K LED and 30 blue 460nm LEDs, mounted in a rectangular array with 15 LEDs in each row and 6 in each column. The only control option on the version tested was ON/OFF control of all the lights simultaneously. Additional larger arrays are available with (192 15,000K LED and 96 460nm LEDs) and an even larger one with 384 white and 192 blue LEDs. The 90W version has a 16X8.5″ footprint. 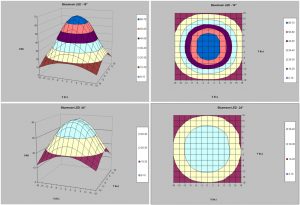 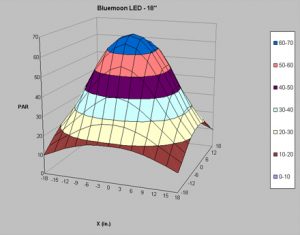 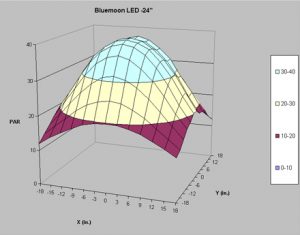 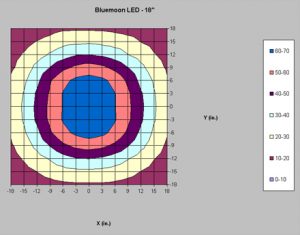 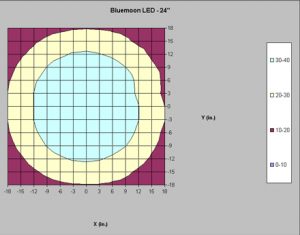 The Ecoxotic Panorama LED fixture takes a different approach to creating LED lighting fixtures. It provides a modular approach with each Panorama fixture being made up of several water proof LED modules that can be easily removed and configured by the end user. This has the added advantage of being self serviceable. Each Panorama module has 8 white LEDs (8000K) and 4 blue LEDs (453 nm). The 17.5″ fixture tested here has 4 such modules, while the larger 23.5″ version has 6 modules. Multiple fixtures can be used to cover larger tanks. Each LED fixture comes complete with all the mounting hardware for mounting on the tank stand, allowing for height adjustments and a hinged attachment to allow for access to the tank for cleaning and maintenance. This fixture does not come with any controls other than ON/OFF, and requires to be plugged into an external timer to automate the light ON/OFF cycle. Additionally this fixture, is capable of accepting the Ecoxotic Stunner strips of blue LEDs (453nm and 403nm), to allow for further color adjustments and to create any dawn/dusk/moonlight effects by plugging the strips to separate timer switches. 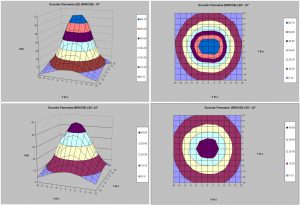 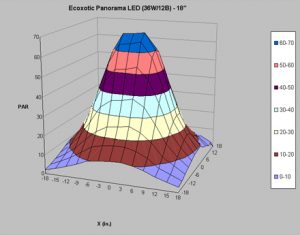 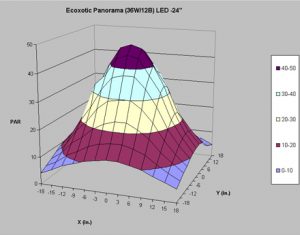 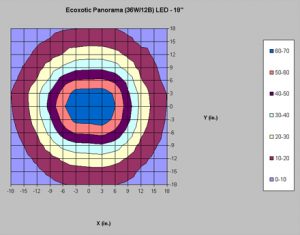 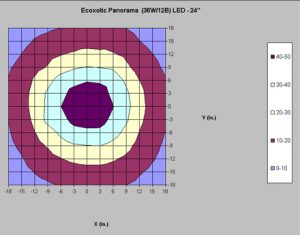 Table 2 below summarizes some the parameters that are useful in evaluating the light output, power input, and peak light output.

As seen from the data, the Aquaillumination 12″ module, had the highest PPFD values at 24″ and 30″. While this module achieves the highest values of any of the LED systems tested so far, it also has a tighter spread created by the optics used. The light output is certainly more than high enough for even the most light loving corals. The impact of the high intensity can be reduced by dimming or by mounting the light higher to gain a larger spread. My experience and data collected from various successful tanks shows that if light levels of approx 100 micromoles/m2/sec can be obtained at the bottom of the tank, then there will be enough light in the top 3/4th of the tank to grow most light loving SPS corals, while providing enough light at the bottom for other lower light corals.

The class of low power LED fixtures, have an added advantage of not needed any external cooling devices (eg. fans built into the fixture) and hence tend to be very quiet. The light levels obtained with these are less than what is seen with the Aquaillumination and KR-92. Based on data, these fixtures would be most suited for tanks about 18″ deep housing mostly lower-mid light corals, such as various LPS, soft corals such as leather corals, mushroom, zoanthids etc. Some SPS corals can be placed in the top 6-8″. Figure 5, shows the comparative light spread of this set of LED fixtures, and can be used to determine the tank size, coverage, and number of fixtures needed to light an aquarium. 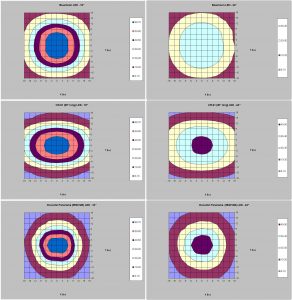 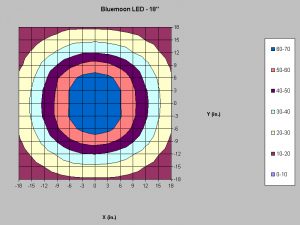 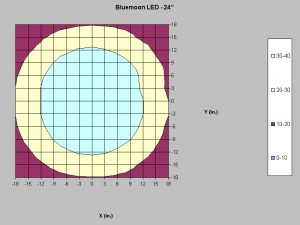 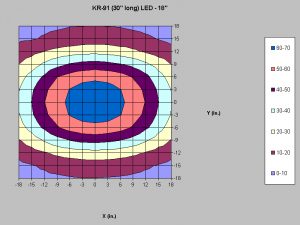 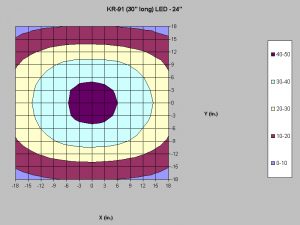 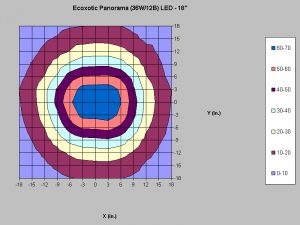 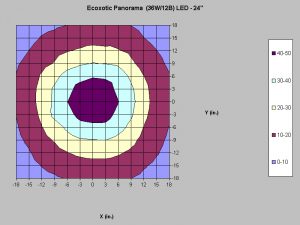 LED lighting for reef tanks is on its way to becoming a reality. Different LED fixtures address the lighting problem in several different ways, small number of high power LEDs with optics or with large numbers of low power LEDs with no optics. As seen from the data the current crop of the low power LEDs are fairly similar in light output with the distribution being primarily governed by the size of the arrays. High power LEDs such as the Aquaillumination, and KR-92 (tested earlier) have the capability of providing high PPFD values with more than sufficient light to grow high light SPS corals, albeit at smaller distribution spreads than typical MH systems. There are differences in the design philosophy, cost, quality, workmanship, controller functions, and warranty that may provide further differentiation among the myriad of LED products that are hitting the market.