All data was collected using an Apogee Instruments Quantum Meter, Model No. QMSW- SS. The intensities are compared to computed values of intensity at depth using Jerlov’s light transmission tables.

For years, aquarists have used a simple measure of Watts per gallon as a means of comparing lighting levels. For as long as I can recall, people have argued against its use, yet there exists other simple methods for comparing lighting levels between tanks. Various authors have tried tackling this subject, covering light from a wide variety of angles, from different bulbs, to different ballasts, to different reflectors. Yet no one has characterized light fields in actual aquariums which is what I aimed to change.

The Apogee meter measures PAR (Photosynthetically Active Radiation), a range of light from 400 to 700 nanometers where photosynthesis takes place. The units are micro-Einsteins per meter squared. All sensors that measure this range suffer from some degree of mis-measurement. The ‘gold standard’ sensor is made by a company called LiCor. (http://env.licor.com/Products/Sensors/li192sa.htm) The price for the sensor alone is $550. For the entire system, the price runs in excess of $2000. The important thing is to look at the sensor’s sensitivity to light. 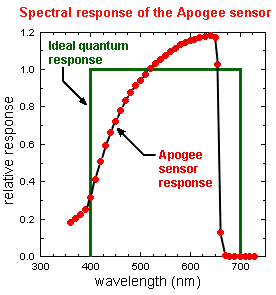 As you can see, the LiCor meter does not match PAR perfectly, but the fit is better than the Apogee. Both sensors will be far better than the response curve of a lux meter. The Apogee will tend to undermeasure the blue spectrum of the bulb somewhat vis a vis the LiCor. Dana Riddle, who has both sensors and has used them quite a bit, has told me that the readings he gets from both units coincide quite well. With a price tag of roughly $300, the Apogee Quantum meter was within my price range, while at $2,000 plus, the LiCor was not. 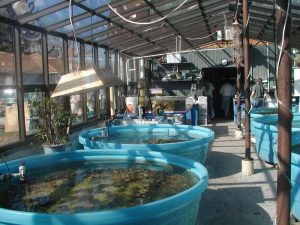 Here is a picture of Harbor’s greenhouse setup for those not familiar with it.

In nature, sunlight intensity can be quite intense. Measurements in excess of 2000-2200 μE/m2 (Micro-Einsteins per square meter) have been recorded at noon in the tropical sun.

Joy Meadows, owner of Harbor Aquatics, has a nice SPS tank setup housing all of her Acropora colonies. The tank is lit with 400W Metal Halide bulbs. She runs two different bulbs, the Iwasakis and Radiums. The Iwasaki bulbs win, hands down with 892 vs. 578 μE/m2. That is a difference of over 150%! 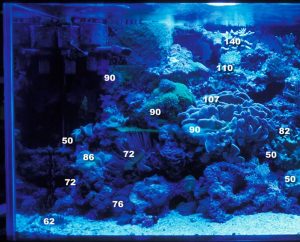 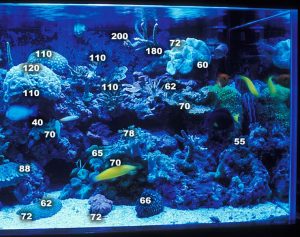 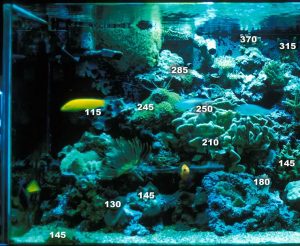 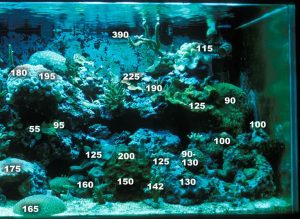 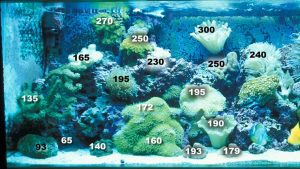 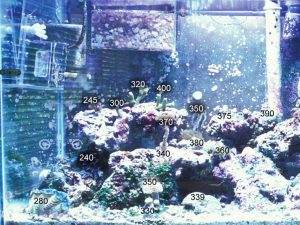 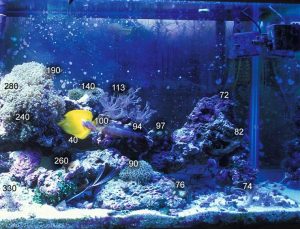 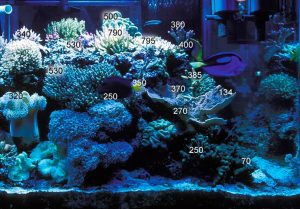 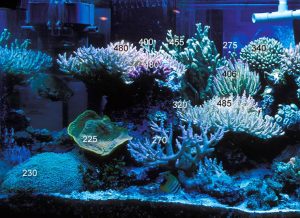 Tullio Dell Aquilla had a nano tank set up in his room at the IMAC conference.

The tank was lit by just 3 LEDs installed in a hood meant for a compact fluorescent tube. The reflector surface was flat, meaning that the LED essentially acted as a ‘bare bulb’ setup. With proper reflectors, these numbers should go up quite a bit. Total wattage for these three bulbs: 13 Watts 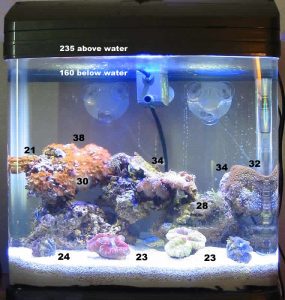 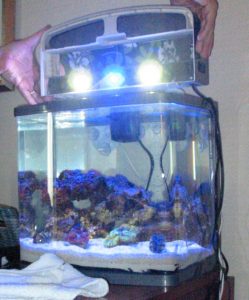 Tullio did have some LED bulbs installed in reflectors as well:

Lighting: Two 250W bulbs, one a Mogul Ushio 10K and the other a double-ended Ushio 10K.

The double-ended bulb was lit by an HQI ballast. The fixture seemed to put out significantly more heat than the mogul one. It also put out more light, approximately 10-12% more. 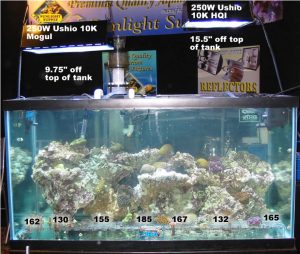 The bulbs were suspended at different distances from the top of the tank, partially to show off the suspension mechanism, but also to try to make the light fields even. They did surprising well, with the light levels being rather even at the bottom of the tank.

Note that the 130 readings were in areas partially shaded by live rock.

I will note here that the tank did have some problems, which make these numbers somewhat lower than expected. However, it is not a fair comparison. First of all, having the lights suspended so high above the tank is not the ideal way to get light into the tank. Most tanks seem to have the lights between 5.5” to 8” off the water. Secondly, the water was fairly turbid, mixed with quite a bit of micro-bubbles from the skimmer. The tank was also bare- bottomed, meaning that these are the deepest readings I have taken, with the sensor a mere 1” off the bottom of the tank.

Given a more normal 4” sandbed and lights lowered to 6” off the top, the light levels would be more in line with Adam’s numbers above. Given these factors, I was quite impressed with the light levels produced.

All of these numbers are quite interesting, but they only become meaningful when you compare them to light levels found in the wild. So let’s go ahead and jump in.

In 1968, Jerlov published a book on optical oceanography that classified water into several types based on how light is transmitted through it. The work is often cited and is still in use today.

The intensity levels for light do vary somewhat dramatically between the different water types, which is not entirely unexpected.

If we are to assume that light levels at the surface are 2000 μE/m2, the following table can be derived: (All readings below in μE/m2)

Given that we know so little about the collection sites from which our corals come, we have to make a few assumptions. Many of the most colorful Acropora, for example, are found in reef flats or at relatively shallow depths. Knowing this, we could try to shoot for light levels that approach the levels given here.

On the other hand, it is also very possible that some of the pigmentation that we see is due to too much light. Once a coral reaches P-max, more light actually lowers the rate of photosynthesis slightly. So a safer approach might be to look at lowering the light levels somewhat.

In other words, shoot for whatever are the minimum levels required to keep the higher light loving species alive and thriving. We don’t really know these levels for coral, but we do know what works for Tridacna clams. It would seem that shooting for levels of approximately 250 μE/m2 at the bottom of your tank should allow you to keep Tridacnas. Thus, it seems fairly safe to say that many, if not most, other light-loving species should survive just fine under this level of light.

From what I have measured so far, it appears that for a typical 75 gallon to 120 gallon tank, 250W metal halide bulbs in the 6500K to 10,000K range should provide enough light to bathe the bottom of the tank with a light field of 250 μE/m2 or so. Deeper tanks, or tanks with higher Kelvin temperature bulbs may require higher wattages to reach these levels of intensity.

I would like to thank all of the following people for inviting me into their homes and allowing me to photograph their tanks, and for lending me a hand in gathering the data: Doug Lehman, Jim and Marty Bash, Adam Schneider, Howard Allan, Tullio del Aquilla, Joy Meadows of Harbor Aquatics, Shane Graber for the pictures at IMAC, Steve Shannon for the helping hands at IMAC, Brad Shaw and Perry Jones of Sunlight Supply

I hope to follow this up with more data taken from tanks in the near future.