Media Review: A Review Of The Literature.

Cleaner wrasses have long been recognized as predators on various parasitic crustaceans commonly found on fish. This study shows that the common south Pacific cleaner wrasse, Labroides dimidiatus, can also feed on and control, the monogean (trematode) parasite Benedenia lolo, on the wrasse Hemigymnus melapterus. Monogeans often become problematic in aquaculture and aquaria situations once they are introduced due to poor quarantine procedures. They can often show explosive growth in numbers and can be very difficult to eradicate once introduced. Chemicals and freshwater baths are often used to control their numbers and prevent their introduction into systems but these can be expensive and/or time consuming. 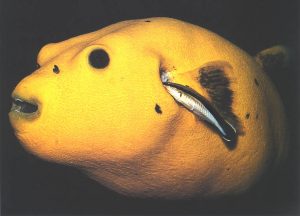 This is a photo, taken by Julian Sprung, of a yellow puffer ( Anthron sp.) with a cleaner wrasse ( Labroides dimidiatus ) entering its gill for cleaning purposes. For those of you who recall this photo was used as the cover photo for the original Aquarium Frontiers, Fall 1994.

This study examined how effective the cleaner wrasse was in removing monogeans and what effect they would have on their abundance and size-frequency distribution under the controlled conditions of an aquarium. In the test aquaria it was found that small fish (<11.5 cm) had 100x the number of monogeans of wild small fish while large fish (>11.5 cm) had 15x the number. Small fish had higher densities of monogeans than larger fish and had greater numbers of small monogeans (<1 mm) indicating that small fish appeared to be more susceptible to infection by the motile infectious stage of monogeans. However, large fish had more large monogeans (> 3mm). Fish can exhibit immunity to parasites and this immunity can be acquired. It was thought that the increased susceptibility to monogeans in smaller fish might be linked to a lower resistance to disease as has been shown in other fish parasites and fish species and that as they grow larger they acquire an increased immunity to
infection.

This study indicates that cleaner wrasses can help to control benedeniine monogean populations in closed systems; however, there is a difference in how they can affect the population depending on the size of the fish involved. By selectively removing large monogeans, cleaner wrasses can help to slow the spread of infection and perhaps, over time, even eliminate them from systems. However, for hobbyists that have relatively small systems with low fish densities, and who should be acquiring fish that have already been adequately quarantined, the role of cleaner wrasses in such systems in questionable. Wholesalers and other importers on the other hand, may benefit from keeping a small population of cleaner wrasses in large holding systems where large fish are regularly held. This does not, however, preclude the need for pretreating fish upon arrival from areas known to have high incidences of monogean infections on fish e.g. Marshall Islands, Christmas Island with freshwater baths or
medication.

For public aquariums or other facilities that house large populations of both large and small fish, cleaner wrasses can be useful tools to help control the spread of benedeniine monogeans or while chemical means are used to totally eradicate them.

Unless you are 110% confident that the fish you purchase are free of disease, then hobbyists should always quarantine any new arrivals in a separate system for at least three weeks to ensure they are not carrying any disease and are eating and behaving normally.

These two studies both underline the stresses placed on corals that are exposed to not only elevated temperatures but also elevated nitrate and ammonium levels. The levels of ammonium and nitrate used in these studies are lower than found in most hobbyist systems and underscore that our systems are not always close approximations to nature. This is something that I have long argued when others have advocated raising temperatures or making other changes to our systems while ignoring other factors that can act synergistically to create problems.