Media Review: A Review Of The Literature

Over the last eight years various studies have appeared that deal with the ability of zooxanthellae to adapt to higher temperatures and light levels through various mechanisms such as antioxidant enzymes, down-regulation of photosynthesis and xanthophyll cycling. In contrast, very little work has been done on the reaction of the host coral tissue to the same stressors with most studies focusing on UV blocking compounds and fluorescent pigments that reduce light penetration and heat shock protein production that limits damage to cellular functions.

Colonies of the stony coral Goniastrea aspera were examined in Phuket, Thailand. What makes this particular coral interesting is that during periods of high water temperatures in 1991, 1995 and 1998 many of these colonies exhibited differential bleaching; the east facing sides bleached but the west facing did not. What makes this remarkable, is that during earlier parts of the year the corals bleached on the west side due to higher irradiance levels on that side of the coral during afternoon aerial exposure on low spring tides rather than the more shaded eastern side of the colony. Subsequent work showed that this was due to a significantly higher thermal tolerance on the west side, which the authors feel was due to the previous exposures to the higher light levels at low tide. Somehow, this prior experience resulted in greater heat tolerance as well. The goal of this study was to investigate the physiological mechanisms involved in acclimatization and how the co-tolerance
to both heat and light could occur.

Cores were taken from both east and west sides of 66 colonies for a total of 162 cores. In addition two cores were from each east and west facing side from five colonies to be proved a baseline analysis. Over the course of two days the 162 cores were subjected to elevated temperatures (5o C above ambient). Various molecular biomarkers of oxidative stress in both zooxanthellae and host were measured in cores taken from east and west sides, both before and after exposure to higher temperatures as well as zooxanthellae density and zooxanthellae photosynthetic efficiency. The biomarkers measured in the coral symbiosis (host and zooxanthellae) included: 4-hydroxynonenal (HNE) and malondialdehyde (MDA), which are indicators of oxidative damage and ubiquitin which is a marker of cellular damage. The animal host tissue and isolated zooxanthellae were both tested for the heat shock proteins Hsp70 and Hsp 60. These markers are involved in reconstituting denatured proteins and increased
levels of these two indicate a response to stress. Two important enzymes involved in the anti-oxidative response were also measured in both animal host tissue and isolated zooxanthellae. Copper-zinc superoxidase dismutase (CuZnSOD) and manganese superoxide dismutase (MnSOD), any increase in these would be an indication of a defense response by the animal host or zooxanthellae to oxidative stress. Finally the zooxanthellae were also assayed for the presence of chloroplast small heat shock protein (Chls-Hsp). This protein protects photosynthetic processes during heat stress, oxidative stress and during high irradiance.

The question that has puzzled researchers for some time is whether thermotolerance is a function of the host, the zooxanthellae or a combination of the two. This study has provided evidence that on the west facing side of the Goniastrea studied, the host tissue confers a great deal of the thermotolerance. Increased CuZnSOD, Hsp60 and Hsp70 production by the coral tissue helped to deal with thermal stress. Furthermore, the greater amount of fluorescent pigment on the west side helped to reduce the amount of solar radiation penetrating the tissue, which in turn reduces the possibility of light damage at higher temperatures.

Of course the zooxanthellae also play a role in thermotolerance as evidenced by the increase in algal biomarkers (including Chls-Hsp) on both sides of the coral when temperatures increased. Although the production of heat stress proteins has been known to occur in stony corals for some time, this study showed that both the host tissue and the zooxanthellae produced these proteins. Both corals and zooxanthellae produced significant amounts of Hsp60 and Hsp70 such that by the end of the two days over 5% of total soluble protein production could be attributed to these two stress proteins. When it comes to photosynthetic capability it has been shown that xanthophyll cycling and xanthophyll pigments help to reduce the effects of light at increased temperatures in higher plants by dissipating excess light and is likely in corals since previous studies have shown increased oxidative stress when the xanthophyll cycle is inhibited. This study found no difference in xanthophyll pigments
between east and west cores at elevated or ambient temperatures but did find a higher pool of available xanthophylls in west side corals in their baseline samples. They concluded that this was due to earlier exposure to higher light levels on the west side of the coral on the reef. What was noteworthy was how quickly the zooxanthellae on the east side increased their xanthophyll cycling capability. This underlined the fact that while the zooxanthellae on the east side could quickly adjust (within hours) to the experimental conditions in this study; the coral host defenses took much longer. 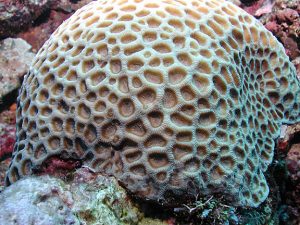 The question still remains, how does protection against high light levels help to confer greater resistance to damage caused by high temperatures? Several studies have shown that one of a coral’s greatest problems in dealing with high temperature is its increased susceptibility to high light levels. Therefore anything that can reduce light penetration (e.g. fluorescence) or can dissipate light energy (e.g. xanthophyll cycling) will help reduce damage. Furthermore, the productions of anti-oxidants (e.g. CuZnSOD) inactivate oxygen radicals and reduce tissue damage caused by high light. This study also found an increase in heat shock proteins in all cores when light levels were increased, with the greatest increases being found in the west side cores. Heat shock proteins not only respond to thermal stress but also other stressors such as high light, so it should not be surprising that the higher irradiated west sides of Goniastrea would show higher levels of these proteins
and hence, confer a greater resistance to heat induced bleaching than the east side.

This study is significant not only in that it shows that corals that are acclimatized to high irradiance, even for short periods, can develop increased thermotolerance, which may prevent bleaching at high sea temperatures, but also that the host tissue plays an important role on in dealing with higher temperatures in the higher irradiated west sides of Goniastrea aspera.

For aquarists this study points out a couple of useful things. First of all it may be possible to confer a greater resistance to higher temperatures and therefore reduce a coral’s risk of bleaching, by increasing the light intensity on an aquarium that may be somewhat under lit. Of course any changes that would be made in lighting would need to be gradual so as to lower the risk of light induced bleaching if done too rapidly. As this study has shown, the zooxanthellae can respond rather quickly; however, the host tissues do take longer to adjust.

Secondly the roll that anti-oxidants play in dealing with excess light is again underscored. In this study CuZnSOD concentrations were shown to differ significantly between west and east cores over the two day trial while MnSOD did not. However, both enzymes did increase on both sides over the course of the study. Julian Sprung, in the December 2002 issue of this publication, hypothesized about the importance of manganese (Mn) additions to aquaria in order to facilitate the production of anti-oxidants in Goniopora. Perhaps in Goniopora MnSOD levels drop over time due to lack of Mn in the water or in the diet of the corals. Sprung’s preliminary results in dosing an Mn-Fe solution have been encouraging. However, a more convincing argument for the role of MnSOD in Goniopora could be made by measuring the levels of this enzyme over a time course to see if Mn additions do indeed increase the levels of MnSOD in the coral host tissue. Without such testing it is
unknown whether MnSOD or CuZnSOD or levels of both decline in Gonipora and whether or not manganese additions play any direct role.

Also underscored is the potential for variation in enzyme activity between genera and perhaps between species of corals. In the case of corals like Goniastrea, copper and zinc additions might also be helpful in maintaining enzyme levels along with manganese, and may also play a role in Goniopora. In fact, the concentration of both copper (0.0005 mg/L) and zinc (0.0049 mg/L) are higher in natural seawater than manganese (0.0002 mg/L) in natural seawater (Spotte, 1979). However, the levels of copper and zinc in Instant Ocean were shown to be several times of that in seawater, whereas manganese was undetectable (Shimek, 2002). However, possible inaccuracies in Shimek’s table #1 make any conclusions based on his testing suspect. http://www.reefkeeping.com/issues/2002-02/rs/feature/index.htm

The following are citations for some of the articles that might be of interest to aquarists, which were published in the fall and winter of 2002.