Hawaii, especially the West Coast
of the Big Island, is the nation’s biggest aquarium species
exporter and there is always concern over the impact of
collecting for the ornamental trade. The October 10, 2005 front
page story in West Hawaii Today,
under the rubric “Ocean Resources | Regulation,”
reported the following as part of a continuing wake-up call to
those who care about the sustainability of the wild stocks of
ornamental fish we love and on which we depend for our
aquariums:

“With the notable exception of a five-year-old regulation
project along the Big Island’s Kona Coast, (Note – See the
11/04 Media column for information on the “Fish
Replenishment Area” strategy) a $50 permit allows collectors
across most of Hawaii to net as many of a species as they want,
wherever they want and whenever they want. That sometimes means
harvesting hundreds of thousands per year of a single species
from a single bay.”

The article went on to make this important point about the
role the algae grazers play in maintaining the health of the
coral reef environment itself; “a number of marine
biologists worry that removing plant-eating fish from near-shore
reefs already threatened by urban runoff could lead to an
overgrowth of algae.”

The article goes on to state: “According to state
figures, collectors brought in 557,673 marine creatures during
the 2004 fiscal year with a reported value of $1.08 million. But
state officials believe those figures to be three to five times
below the industry’s true worth in. Forty-seven percent of
the reports required of collectors working in the islands’
biggest collections area, along the west coast of the Big Island,
went unfiled between January 1998 and July 2003, according to a
2004 State Department of Land and Natural Resources
report.”

Full reporting might then count between 1 million, 650
thousand and almost 3 million organisms, the great majority of
them yellow tangs! Even with wise management this is an enormous
take in a limited fishery.

There is only one way, other than further restricting
collection, for us to ensure the availability of beautiful reef
fishes for our aquaria. We must support those engaged in captive
breeding programs and other aquaculture techniques. This may very
well entail the willingness to pay more for our acquisitions. 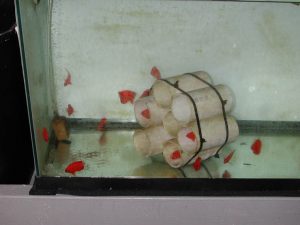 This position is nothing new. As I reported in the Media
column one year ago, both Anthony Calfo and Scott Michael, two
names familiar to us all as experts, have come to this
conclusion. Anthony Calfo, in “Responsible Reefkeeping for a
Self-Sustaining Hobby” (Tropical
Fish Hobbyist, October 2004, pg. 84) states:
“Consumers should ask for and purchase captive-bred
[organisms]…. Some of these captive produced specimens will be
more expensive… they are likely to be hardier and better
adjusted to captivity. (and) cleaner, with far less risk of
parasites or disease. This clearly gives aquacultured species a
distinct and significant value.”

Scott Michael, in “Seven Steps Responsible Aquarists
Should Know,” in Aquarium Fish
Magazine (October 2004, pg. 52) agrees;
“Buy tank-raised animals when
available…. There are a couple of reasons why purchasing
captive-raised marine organisms is beneficial. The most important
is that we can take the pressure off wild stock “

Of course much has been done. In the July 2003 issue of AAOM I
interviewed Dr. Dale Sarver and Neil Simms of Kona Blue Water
Farms at the Natural Energy Laboratories of Hawaii Authority
(NELHA). They successfully bred and raised the highly popular
Flame Angelfish as part of a research project on foods for larval
stage hatchlings and are capable of producing them in commercial
quantities for the aquarium trade. Since that time they have
abandoned the project. As they thought, they could not compete
with the price of wild-caught fishes. This is a great loss and an
ethical stain on our hobby. The issue is not just to request
aquacultured organisms from your LFS or even to actively
encourage them to provide such stock,
BUT TO SHOW YOUR COMMITMENT BY BEING
WILLING TO PAY A PREMIUM PRICE FOR THESE SPECIMENS. 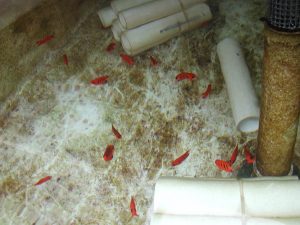 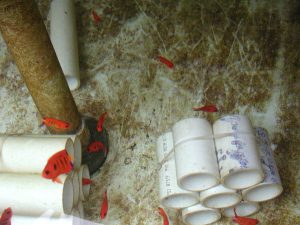 We will have another chance. The front page story in
West Hawaii Today of July 26,
2005 reads “Marine biologist receives grants to raise reef
fish.” Carolyn Lucas reports that expert marine hatchery
biologist Syd Kraul, owner of Pacific Planktonics at the Natural
Energy Laboratory here, is researching ways to successfully
produce high value ornamental reef fish in captivity for the
aquarium industry. Estimates are that the market has a potential
annual worth up to $15 billion worldwide.

She further reports that Syd Kraul plans to raise yellow tang,
butterfly fish, angelfish and wrasses — fish that have not been
cultivated before, or have only been bred in small numbers.

He has been awarded a $78,150 Hawaii Department of Agriculture
grant and a $21,281 Small Business Innovation Research Matching
Grant from The Hawaii High Technology Development Corp.
Kraul’s intent is to develop new production methods so that
he can lower the costs for farming these fish.

“The market for ornamental fish is very large, but that
market is supplied primarily by wild fish captured from tropical
reefs,” he said. “Hatchery technology is only
marginally successful for most reef fish. Success in this project
will increase the number of fish species we can raise profitably,
and may indirectly reduce fishing pressure on reefs in Hawaii and
elsewhere.”

Kraul also reminds us that some of the methods used to capture
fish harm the reef. In the Philippines and Indonesia, divers have
been known to use sodium cyanide solutions to stun the fish. In
the process, they can kill coral and damage the reef
environment.

In the United States, about 5.6 million marine tropical fish
are held in approximately 1.1 million aquaria. With an estimated
value of $400-500 per pound, entrepreneurs have attempted the
aquaculture of ornamental fishes since the mid-1970s, but have
been severely limited by technology and have been successful with
only a limited variety of species.

In my interview with Sarver and Simms of Kona Blue Water, they
declined to identify the organisms they were researching as
possible early laval feeds. Kraul is not so reticent. He goes on
to state, “Marine fish hatcheries still rely on rotifers
(Brachionus plicatilis) and brine shrimp (Artemia spp.) nauplii
because copepods and other plankton are difficult to culture in
large volumes, and because the art of keeping very small fish
larvae alive has not been mastered by the general aquaculture
community,”

Pacific Planktonics is focusing on the nutrition requirements
of broodstock — what they need to eat to continue spawning and
maximizing the quality of the eggs and larvae produced. He
suspects reef fish will survive better when Euplotes ciliates are
used as a first feed for reef fish larvae. In order to determine
this, he will compare the nutritional values of ciliates and
calanois copepods.

For Kraul, as for many businesses, one of the major issues is
the labor cost involved in running the hatchery. If fish larvae
grow on ciliates, labor and equipment costs could be greatly
reduced. “Labor for maintaining and harvesting 10 ciliate
culture tubes (enough to feed 5,000 liters of larval fish culture
water) is about 1.5 person-hours per week,” Kraul said.
“Labor for comparable copepod culture and harvesting
includes algal culture, and totals more than 40 hours per
week.”

Kraul has much experience with raising ornamentals. He has had
partial success raising butterfly fish, centropyge angels,
scorpionfish, triggerfish and other fish through the first
feeding stage. In fact, yellow tang larvae were kept alive for 40
days.

Still, the project is in the early stage of research and
development and Kraul is unsure when the fish will be available
to be sold commercially.

“There is a chance that ciliates will not support larval
fish growth, regardless of the physical and nutritional
manipulations,” he said. “This is the riskiest part of
the project, but can have the biggest impact on our long term
financial success.”

Another recent front page story in
West Hawaii Today concerned an
ongoing aquaculture success at the Energy Lab. The previously
almost secretive owners of Ocean Rider Inc., aquaculture
producers and exporters of a number of seahorse species adapted
to frozen food diets, has opened its doors to visitors.

The announcement, “Visitor Center Opened” contained
the following, “You have been asking us for tours and to get
a glimpse of where the little critters are born and raised. We
are pleased to announce that the Ocean Rider facilities are now
open for tours to the general public.” See their web site
for details at
http://www.oceanrider.com.
There are some interesting photos here as well:

http://seahorse.com/component/option,com_gallery/Itemid,31/.
It’s another great reason for a trip to the Big Island of
Hawaii. While you’re there come and visit me at NELHA’s
outdoor exhibit area, where we have live displays of many of the
organisms, both food and ornamental, that are aquacultured
here.