This volume contains 240 pages that are profusely illustrated with more than 500 excellent color photographs, graphs and line drawings. There is also a bibliography and list of suggested readings, and an index.

Reef Secrets by Alf Jacob Nilsen and Svein A. Fossa 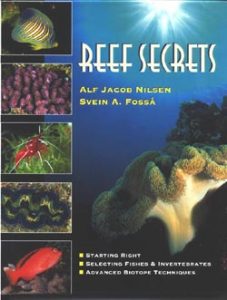 Alf Nilsen and Svein Fossa, authors of four volumes of important scientific and technical information in their Modern Coral Reef series have combined to author a book again, this time primarily directed at aquarists just starting to acquire the basic knowledge needed to be successful in establishing healthy and beautiful reef aquariums. They have provided a handsome and highly informative source of material that provides basic knowledge about the natural biotope of wild coral reefs and about the techniques currently available to replicate these as closely as can be done.

In the book’s Introduction the authors repeat their commitment to the values that underlay their more detailed work – the marine aquarium provides both an educational “living science demonstration” and a source of beauty in the home, as well as a powerful tool for creating interest in the urgent need for conservation of these priceless ecosystems. They conclude the chapter by stating, “We believe that marine aquarists will play a vital role in helping to stop destructive fishing practices, support sustainable harvesting plans, and educate their families, friends and the general public about the living wonders, beauty and value of coral reefs.” I hope and believe that they are correct.

Chapter 1, Light, Darkness and Shadows, outlines the fundamentals of the role played by light in the photosynthetic process of primary producers and of the algal symbionts of coral reef animals. Emphasis is placed on the fact that there are differing light requirements among desirable aquarium organisms and stress is placed on the creation of overhangs and shaded areas as well as highly illuminated regions, a worthwhile consideration in aquascape design. The authors cover the use of fluorescent, compact fluorescent and metal halide systems and present the pros and cons of each.

Chapter 2 focuses on water quality and water movement, presenting those aspects of most importance for the new coral reef aquarist. It is in this chapter that the authors provide a schematic titled “Components of a Successful Coral Reef Aquarium,” covering water quality, live rock and sand, protein skimming, lighting, water motion, mechanical filtration and activated carbon, and calcium supplementation. They emphasize the all-important need for patience in allowing the system to run until it stabilizes before adding fishes and invertebrates other than algae eaters and detritovores. The chapter also contains diagrams for a two-tank tide pool display and a Carlson surge device.

Aquascaping is the focus of the third chapter, highlighting the role of live rock and attachment techniques, and discussing some of the debate around issues of sand bed depth. Chapter 4, Biotopes: Modeling Aquariums on Ecological Niches on and Around the Reef, concerns an issue dear to these authors’ hearts. In their Modern Coral Reef series Nilsen and Fossa advocated the creation of specialized reef tanks that physically mimic naturally occurring ecosystems and are populated by appropriate organisms, rather than the hodgepodge “garden” of the usual tank, occupied by inhabitants the reef keeper obtained in various ways and for various reasons. They come back to that approach here, presenting notes on the construction of seagrass, reef gorge, rubble zone and small cave zone habitats and, based on a micro ecosystem observed on a trip to southern Thailand, even a “Pizza anemone aquarium” featuring the anemone Cryptodendrum adhaesivum, its symbionts and associated organisms. In each case a description of the natural habitat is followed by suggestions for tank design and construction and a list of appropriate inhabitants. These authors and others have advocated this approach, usually to audiences of experienced aquarists. It will be interesting to see if the concept takes hold among the beginning aquarists addressed here.

The next two chapters form the bulk of the book and are devoted to stocking the aquarium. Chapter 5, “Aquarium Stocking,” discusses the major concerns involved in choosing livestock and emphasizes the pitfalls to be avoided by the usually all-to-eager aquarist. Issues of aquarium size, population density, hardiness and compatibility are discussed. Two important tables are provided; a three page compatibility list stressing specific considerations for many major taxonomic groups and a four page listing of organisms that are potentially injurious to the aquarist, with symptoms and treatments for each, as well as precautions to take to guard against injury.

Chapter 6, the authors’ Stocking Guide, contains more than 100 pages of photographs, text and coded color keys, describing potential tank specimens, four to a page. Covered organisms include sponges, hard and soft corals, anemones, molluscs, annelids, crustaceans, echinoderms and fishes. Among the more than 400 species included you will find almost every available organism you may come across either as intentional or unintentional introductions to your aquarium or even as those you observe diving or snorkeling over reefs. Each entry has an excellent identification photograph (many by Scott Michael), area of origin, full taxonomy, common name, adult or mature colony size, appropriate aquascaping, circulation and feeding requirements and compatibility with other organisms. Color codes indicate levels of ease or difficulty in providing essential requirements.

Chapter 7 deals with algae. Nilsen and Fossa take a nuanced position on the role of algae on the reef and in the aquarium. After discussing the importance of algae in the ecology of the tropical coral reef, the authors state, “As algae are such an important biological component of coral reefs, it is strange that they are usually not seen to be vital to the biology of the coral reef aquarium as well…. algae are often portrayed as the enemy in reef systems, but the reality is that that various algae will always be a part of the reef aquarium. Indeed, they must be there if the system is alive and well.” They even have a photograph of a tank that they describe as a “Dutch planted reef” with a heavy growth of fleshy macroalgae. This is the first time I have seen that term, usually used in reference to heavily planted freshwater tanks, as a label for a reef aquarium.

Of course the problem is primarily with filamentous algae and Valonia. The authors provide important suggestions for nutrient reduction, maintaining correct salinity levels and appropriate light sources, as well as a helpful chart of algae grazers and other herbivores.

(There seems to be less antagonism to non-calcareous algae among reef keepers these days, but the usual practice is to treat them as suspicious characters and isolate patches to sumps and refugia. The authors here advocate placing them in the main display area. I have included as many species of macroalgae into my tank as I can find and grow – partially out of necessity due to Hawaii’s stringent regulations on corals – and find them a rewarding and attractive addition. There’s not a trace of filamentous algae in the tank.)

Foods and feeding are covered in a brief Chapter 8. There is a discussion of nutrition basics and available foods and a chart with suggestions for feeding difficult organisms such as mandarin fish. The book concludes with a chapter on marine conservation and the positive role that aquarists can play. Nilsen and Fossa conclude by stating, “Coral reefs are going to need all the friends they can find in the coming century. The reef aquarium is a constant learning experience for those of us who keep one, as well as all who come to visit. It is a living connection to wild reefs and, we hope, a beautiful and powerful tool in helping to protect them.”

This is the first time that I have had back-to-back columns featuring works by the same authors, but it’s been a pleasure for me to accompany them as they present their knowledge and wide-ranging experience. If you know of anyone above the complete novice stage who intends to join us in our fascinating undertaking, this would be a very worthwhile recommendation that could save him or her much grief and ensure a good start. If you haven’t invested the time and energy (and economic resources) required to read their far more detailed series, this book will give you good up-to-date knowledge on reef aquarium structure and maintenance and a fine aquarist’s identification guide as well, in an economical and beautiful volume. The editor and publisher of Microcosm, James Lawrence, working with T. F. H. publications, is to be congratulated for maintaining the high standards we have become accustomed to associating with his work.