The only time I read Tropical Fish Hobbyist or Aquarium Fish Magazine is when copies of them are distributed at MACNA conferences. This year, while scanning through them, I stopped to read two articles by well known authors and aquarists; one by Scott Michael, the other by Anthony Calfo. Each raised important points about the responsibilities that go along with our desire to obtain and nurture marine organisms. These are issues that I’ve covered before, but their appearance in these two popular print publications – both often found on the counters of local fish stores – reminded me that they are continually ongoing issues, not just particular topics and that it is worth visiting them again.

(As a note, Michael somewhat equivocates later by stating “Even though there is little quantitative evidence suggesting that collecting for the marine fish trade is decimating reef fish populations, any steps that can help prevent this from happening should be embraced by the marine aquarium hobby.” The quantitative evidence of major declines is there, and he quoted it. I guess it depends on what you consider “decimating.” Here we believe we were, and perhaps still are, close to it.)

The information on the reductions in commercially fished areas is not new. I reported in Advanced Aquarist Online Magazine, (AAOM) March 2002:

“The collection of fishes from the wild for the aquarium trade is a hot issue here in Hawaii, with much public opposition in the face of verified declines in the abundance of collected species. The state of Hawaii, especially the Kona coast of the Big Island (Hawaii) stands third as a world source of aquarium fishes, exceeded only by exports of live specimens from the Philippines and Singapore.”

The impact of collection is clear. The December 2001 issue of The Smithsonian reports, in “Something’s Fishy,” that Brian Tissot, a Washington State University marine ecologist, found that in Hawaiian waters targeted by aquarium collectors, populations of eight of the most popular species had fallen by 38 to 57 percent. More than 300,000 reef fish are collected from Hawaii’s reefs annually for the aquarium trade (Figure 1). 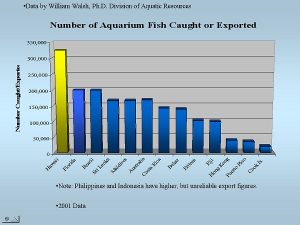 Dr. William Walsh, marine biologist attached to Hawaii’s Division of Aquatic Resources states that, based on collectors reports, 52% of collected fishes here are yellow tangs, yielding an astonishing figure of more than 200,000 yellow tangs taken per year…. The Smithsonian article quotes Hawaiian collector David Dart as saying that “in good weather, an average diver can pull in 100 to 150 yellow tangs a day, and there are many collectors here. ” (Figure 2) 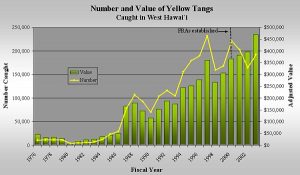 Other species are taken in smaller numbers (Figure 3). Virtually all of these fishes are taken from the West, or Kona, Coast of Hawaii, where I live. I would point out that I know both Walsh and Dart through our joint service on the West Hawaii Fisheries Council (WHFC) and I can assure you that these are very knowledgeable sources and accurate figures. 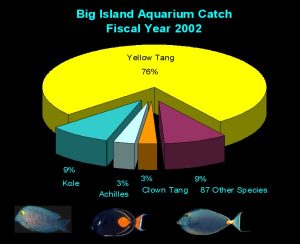 Scott continues, stating as one of his “Seven Steps” that marine aquarist should “_Encourage and support the development of reserve areas where no fishing of any sort occurs_. These types of locations are known as Fish Replenishment Areas (FRA) where adult fish can populate vast tracks of coastline with their young. Studies have shown that an FRA is an easy way to ensure the preservation of fish populations on coral reefs.”

The WHFC was convened in 1998. The areas were set aside in 1999, with a mandate that the University of Hawaii conduct annual surveys of aquarium fish populations and that a major evaluation of the effectiveness of the program was to be done in 5 years. This major evaluation will be available in the next month or two and I will report on it’s findings.

In the meanwhile we have 4 years of interim reports indicating positive results. Protected areas (already established Marine Protected Area as “Controls” and newer FRA’s specifically closed to aquarium collection) show modest increases while populations continued to decline in “Open” areas (Figure 4). Most current information, though not complete, suggests substantial increase in all areas (Figure 5). Figure 6 shows the West Coast of Hawaii with FRA’s indicated and shows that these increases are not necessarily consistent over all FRA areas. 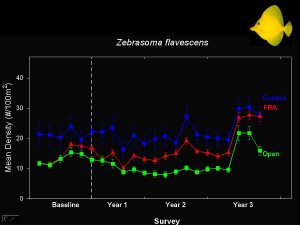 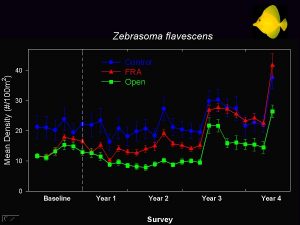 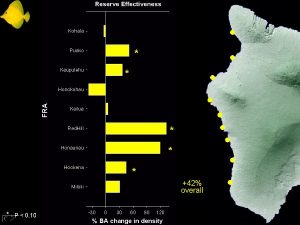 On a related issue, Anthony Calfo, in “Responsible Reefkeeping for a Self- Sustaining Hobby” ( Tropical Fish Hobbyist, October 2004, pg. 84) states: “Consumers should ask for and purchase captive-bred [organisms]…. Some of these captive produced specimens will be more expensive…than their wild- collected counterparts, but this does not mean that they aren’t a good value. On the contrary, they are much more likely to be hardier and better adjusted to captivity. You can expect cultured animals to also be cleaner , with far less risk of parasites or disease. This clearly gives aquacultured species a distinct and significant value….”

Scott Michael, as another of his “Seven Steps,” agrees; “_Buy tank-raised animals when available_…. There are a couple of reasons why purchasing captive-raised marine organisms is beneficial. The most important is that we can take the pressure off wild stock…. “

This is not just theoretical. In the July 2003 issue of AAOM I interviewed Dr. Dale Sarver and Neil Simms of Black Pearls, Inc., a division of Kona Blue Water Farms, located in the Hawaiian Ocean Science and Technology (HOST) area of the Natural Energy Laboratories of Hawaii Authority (NELHA). They successfully bred and raised the highly popular Flame Angelfish as part of a research project on foods for larval stage hatchlings and are capable of producing them in commercial quantities for the aquarium trade.

At the point of our conversation the researchers were not clear about actively moving to exploit the commercial possibilities of breeding and marketing the young Angels for the trade in ornamental species, although they have sold a number of them through local retailers here in Hawaii. The long developmental period of the fish and the associated expenses of rearing and then shipping them made it uncertain that they could compete with retail prices for wild caught fish. I stated in that column, in line with Calfo’s urging,

“This is not an issue for this species alone. Aquarists should demand aquacultured fish when possible, and be willing to pay reasonable premiums for them. Tank reared fish offer a number of advantages to aquarists over their wild caught cousins. First and most important, there is the ethical concern…. You can have aquacultured fish and a clear conscience.” In addition to Calfo’s list of values I will add another powerful one at least for these Flame Angel and probably for other naturally territorial species. They have been conditioned to living together, rather than aggressively maintaining territories as wild fish do. This may very well allow aquarists to keep more than one per tank, and even keep them in groups in larger tanks.

Currently I have two of them in my own 60 gallon aquarium and I have been maintaining three in a 36 inch, 44 gallon tank at the exhibit area of the Natural Energy Laboratories of Hawaii/Hawaii Ocean Science and Technology park. In both cases there is little sign of aggressivity in either tank – on the contrary, they usually remain relatively close to each other.

Sadly, since that article, Sarver and Simms have decided to stop producing the fish. As they thought, they could not compete with the price of wild-caught fishes. This is a great loss and an ethical stain on our hobby. The issue is not just to request aquacultured organisms from your LFS or even to actively encourage them to provide such stock, BUT TO SHOW YOUR COMMITMENT BY BEING WILLING TO PAY A PREMIUM PRICE FOR THESE SPECIMENS.