Media Review: The Most Beautiful Aquariums of the World by Alf Jacob Nilsen and Svein A. Fossa 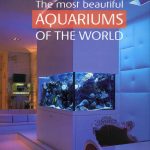 This volume
contains 176 pages that are profusely illustrated with excellent color
photographs. There is also a short list of suggested readings, and a Directory
containing information on tank manufacturers.

Alf Nilsen and Svein Fossa are the well
known authors of four volumes of important scientific and technical information
about marine aquarium techniques and husbandry in their Modern Coral Reef
series, published between 1996 and 2002.
This set is a “must have” for the advanced marine aquarist.  (See for example Aquarium Frontiers
Media column January 1999, Advanced Aquarist Media column January 2003)

They then combined to author Reef
Secrets, primarily directed at aquarists just starting to acquire the basic
knowledge needed to be successful in establishing healthy and beautiful reef
aquariums.  Reef Secrets
emphasizes the varied natural biotopes of wild coral reefs and offers
techniques currently available to replicate these as closely as possible.  The authors emphasized the marine aquarium’s
ability to provide both a “living science demonstration” and a source of beauty
in the home.  The book is lavishly
illustrated and clearly aims at recruiting new aquarists via the visual beauty
of the suggested tank set-ups and of the potential organisms to inhabit them.  (See Advanced Aquarist Media column,
March 2003.)

Their new book, The Most Beautiful
Aquariums in the World, continues their movement away from technical
material of interest to experienced aquarists and toward a wider international
audience spectrum, this time aimed at those who would use aquaria as design
features in their dwelling or working spaces.

The volume’s international approach is
evident in its first few sections, presented in English, French and (I think)
Norwegian.  The Preface emphasizes the
World Wildlife Fund’s approach to marine conservation and sustainability
through the Marine Aquarium Council’s certification process for suppliers.

The Introduction states the authors’
novel goals.  “The Most Beautiful
Aquariums in the World is not an aquarium book.  It is a book about the use of aquariums as decorative elements
and focal points in room furnishings.
The book focuses on architecture, decoration, furniture as well as
aquariums and living aquatic organism.”
Of course as ethical aquarist they caution their readers to “study
aquarium techniques well before you buy an aquarium” or “use professionals to
set up and maintain your aquarium” – a suggestion that will surely be welcomed
by those who install and maintain tanks.

The next section is an interesting one
on the “History of aquarium keeping,” dating the use of ornamental ponds and
fishes back to the Egyptians and Romans of 2000 BC.  According to the authors, the Egyptians preferred cichlids and the
Romans, morays.  The Chinese about 1700
years ago started breeding carp for their red color, a project culminating in
the goldfish, paving the way for adoption by Europeans in the 17th
and 18th centuries.  Later
aquarists increasingly turned to tropicals and by 1940, more than 500 tropical
species were imported.  Current
estimates are that between 1,500 and 2,000 species of fresh water organisms
alone are available. (p. 13).

The introductory material concludes
with two pages of highly generalized advice on setting up and maintaining
tanks.

The visual section starts with
“Sleeping with fish,” showcasing beautiful aquaria as part of bedrooms,
primarily as headboards. (For the rest of this column I will either have to
stop using the word “beautiful” to describe the tanks and photos or search for
a very extensive list of synonyms.  All
of the tanks shown and photos used are gorgeous, although not all set ups would
appeal aesthetically to everyone.)

I should note here that the only
information provided about the technical details behind the systems are a
general statement about their inhabitants (i.e. “Tropical coral reef aquarium
with invertebrates and fish,” or “Fresh water community aquarium with cichlids
and barbs” etc.) the tank’s volume (in liters) and its location.  There is no information on lighting, water
movement, filtration, water chemistry or the like.  Although Fossa and Nilsen state at the beginning that “that this
is not an aquarium book,” both are highly accomplished aquarists and it seems
it would have been simple for them to give us at least rudimentary
information.  I found this failure a
disappointment.  I would also have liked
some information on their selection criteria, although the tanks and setting
they used are indeed highly decorative.

The book’s sections include fish-only
marine aquaria with artificial corals and a wide variety of reef fishes, some
very special mini reefs in large columnar tanks, soft coral tanks of quiet
beauty, marine tanks devoted to highly colored organisms, tanks focused on the
symbiotic relationship between anemone fish and anemones, tanks displaying
Hawaiian tangs, and tanks dominated by branching Acropora species, as well as
others.  Most of these are large volume
displays.

I was very happy to see the inclusion
of some very beautiful freshwater tanks too, including cichlid habitats,
“flooded forest” tanks, a highly modernistic but very effective goldfish tank
and heavily planted Amazon biotope tank along with other impressive fresh water
displays.  I think among advanced
aquarists these fascinating planted fresh water aquariums are undervalued.  The illustrations here might remind some of
their charm.  Even the goldfish tank may
be an inspiration.  (Of course I
maintain a marine tank, a planted fresh water tank and a small lanai goldfish
“pond” as well.)

Each one of the displays emphasizes the
cabinetry, room architecture and the blending of aquaria and spaces as much as
it does the tank inhabitants.  The book
is filled with fascinating ideas about dramatic installations and the
integration of tanks into personal as well as professional office spaces.  For those like myself with rather limited
options (I have a four foot marine tank and a four foot planted fresh water
tank separated by a bookcase on a ten foot dining room wall) the book contains
some interesting hints. For those with larger spaces (and bigger budgets) who
are in the planning stage, the book contains many very attractive
possibilities.

Those who professionally design,
install and maintain aquariums will definitely find the book a fertile source
of material for future projects.  While
this book might not be a critical item on the general aquarist’s bookshelf, for
these professionals it is certainly a worthwhile and important acquisition.

It can serve another function as
well.  I recently entertained a large
part of my family, including middle aged and young couples.  I left The Most Beautiful Aquariums in
the World out as a “coffee table” book.
Everyone “oohed and ahhed” over the pictures and two of my guests spoke
seriously of setting up aquariums.  I
hope the authors will succeed in bringing new people into our fold and
stimulating them to strive for beautiful integrations of aquariums and living
spaces.