Welcome to the Photo Gallery Spotlight. Each month we’ll showcase a particularly nice aquarium photograph, taking the time to discuss the identification and husbandry of the animal pictured as well as information relating to the technical details of how the photo was taken. Readers are encouraged to send images (and details on the organisms pictured, as well as the details of how they captured the shot) they would like to submit for possible inclusion in this feature to admin@reefs.com . For submissions that are published in Advanced Aquarist, the author will receive a $25.00 gift certificate from one of our participating advertisers. 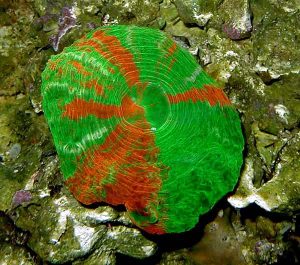 The first shot is a front on view of this magnificent piece that I have had in my tank for about 4 years now, and is approximately 2 inches across. I thought that I had lost it when upon returning from work one day, approximately 2 years ago, I discovered it face down in the substrate, having been knocked off its “perch” during the day. The tissue was almost totally destroyed, with only a couple of small patches, not more than 1/8 – 1/4 inches remaining. It basically did nothing for 6 – 9 months when suddenly I began to see some expansion of the tissue, and within a couple more weeks I had two separate, small animals growing from the old skeleton. 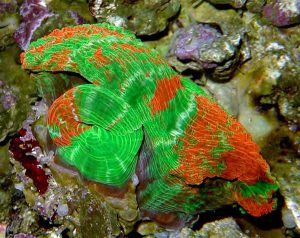 When both got to about 1 inch in diameter I bit the bullet & decided to separate them. I broke the skeleton as closely as I could to the middle of the two, and had to cut the tissue with a scalpel to complete the separation.

The second photo shows the critter as it is now, back to approximately 2 inches across, with another new “baby”, almost ready to be separated again nestled underneath & to the side of the main coral. The original twin is still doing great too, and is about the same size as the larger one in the photo.

Both pictures are of my bright green and orange Scolymia australis. Photos were taken with an Olympus C820 digital camera, virtually in fully automatic mode. No flash was used, and the coral is under one 150 Watt 10,000K bulb. The light setting on the camera was set to incandescent lighting, and the macro setting was selected.