Every reef hobbyist is awed by the magic of coral fluorescence where spectacular colors mysteriously appear and transform the corals into fluorescent green, yellow and red colors when they are subjected to actinic/blue light. Most of the corals we keep in the hobby contain fluorescent pigments that cause this fluorescence effect.

Fluorescence is the phenomenon where atoms absorb energy at certain wavelengths and then release that energy at other wavelengths (typically larger wavelengths than what is absorbed). When the released energy is in the wavelength of visible light we see it as fluorescence. 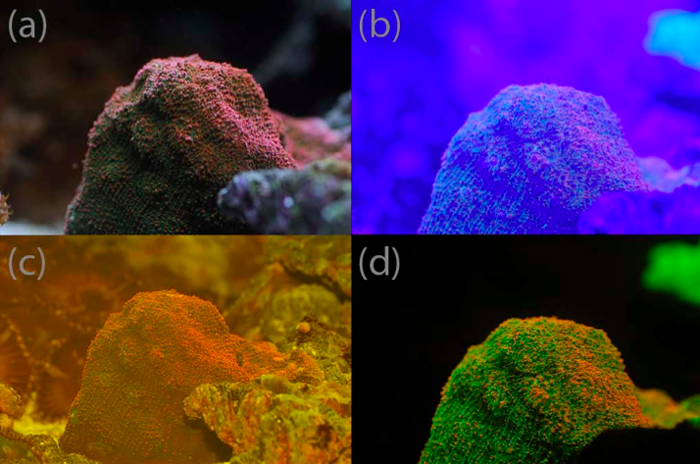 Typically in coral, when wavelengths of light in the blue 400-460nm range are used to provide the energy to excite the fluorescent pigments, they release energy in the longer wavelengths 500-700nm (green to red) that appear to our eyes as fluorescence. This effect has promoted the use of Actinic light or blue LEDs as a “twilight” to visually enhance the inherent fluorescence of coral. A typical coral will exhibit fluorescence under normal aquarium daytime lighting, but the fluorescence effect may not be visible, as it is masked by stronger ambient light and the light reflected off the coral. Fluorescence is a weak effect, and hence shows up more prominently when the ambient light in the aquarium is fairly low, and predominantly blue.

In the language of fluorescence, the blue light that provides the energy source is called the “exciter”. Capturing the sheer beauty of fluorescence in a photo to treasure and display forever is challenging. The fluorescence effect is weak and requires shooting under low light conditions. The blue lighting used to generate the fluorescence casts a strong blue hue in the picture making it difficult to capture the fluorescence. Figure 1(a) below shows a coral in normal daytime tank lighting. The same coral as it would appear in a photo in the presence of the blue exciter light is shown in Figure 1(b). To capture the fluorescence, the blue light needs to be filtered before it reaches the camera sensor/film. This filter is called the “barrier” filter. Figure 1(c) show a photo of the same coral with just the barrier filter in front of the lens. This barrier filter blocks out the light from the exciter thus allowing only the fluorescence to pass through, as seen in Figure 1 (d). This is the magic that we want to capture in the photos.

1) Preferably a digital SLR camera – since they provide a lot more control and flexibility during the picture taking process.

2) A macro lens – since the fluorescence effect is weak, being able to get up close to the object being photographed is very helpful.

3) A source of “exciter” light – typically a large flash, with the exciter filter. It converts the flash into a blue light source. The pop up flash built into the camera is not adequate.

4) A barrier filter – attached to the front of the camera lens that removes the blue light from reaching the camera sensor/film.

5) A tripod – to allow shooting pictures in low light and provide camera stability.

To make it a easier for us, so we do not have to experiment to determine the right type of exciter and barrier filters, Charles Mazel, a pioneer in coral fluorescence research, has created a website www.nightsea.com where the equipment required for taking photos of fluorescence can be easily obtained. Additionally, the website provides numerous links to information on coral and marine fluorescence as well as picture taking tips.

My equipment for taking these pictures is a Nikon D700 dSLR, Nikon 105mm/f2.8 Micro Lens, 52 mm barrier filter purchased from Nightsea, Nikon SB800 flash with a custom cut exciter filter from Nightsea cut to the dimensions of the flash head. This exciter filter is taped over the front of the flash. I use the tripod to steady the camera when shooting with low shutter speeds.

While it is possible to take fluorescence pictures with the normal tank lights ON as described in a technique here (http://www.nightsea.com/lightson.htm ), I prefer to take fluorescence pictures after turning off the tank lights. Complete darkness enhances the visual impact of fluorescence, but makes focusing the camera quite difficult. Having some dim overhead lights, like the room lights, helps in focusing the camera and does not affect the photos.

I typically take the pictures in manual mode, but still prefer to use the auto focusing of the camera lens whenever possible. The flash is set to manual mode to deliver full power. The camera is also set to manual. I typically set the ISO set to 400 (sometimes higher up to 800), and then play with the other 2 exposure controls – shutter speed and aperture and fire off some test shots to make sure that the fluorescence is being captured in the picture. Once satisfied with the amount of fluorescence captured without excessive blooming of the colors, I usually take a few pictures bracketed around the settings by changing aperture and shutter speed to get the depth of field needed and to freeze the motion of the swaying polyps.

If the fluorescence captured is on the dim side, this can be easily tweaked in Photoshop
(or any other photo processing software) to further enhance it. It is best to try and get a quality picture from the camera rather than having to make major adjustments in Photoshop. I was surprised at how easy it was to take the pictures and would encourage you to try. You will be able to capture in photos the magic of fluorescence. Prepare to be surprised at what will fluorescence and with what color. Since a blue light is used as the exciter and the barrier filter is designed to cut out the blue from the photo, the fluorescence that is seen will lie in the green to red range of the spectrum. The green fluorescent pigments in the coral will fluorescence green as the name implies, the chlorophyll will have a weak red fluorescence. Other pigments will show fluorescence in the yellow and orange colors. For a detailed analysis of pigments and their associated fluorescence, this set of articles by Dana Riddle provides a more comprehensive coverage (http://www.advancedaquarist.com/2006/9/aafeature ). 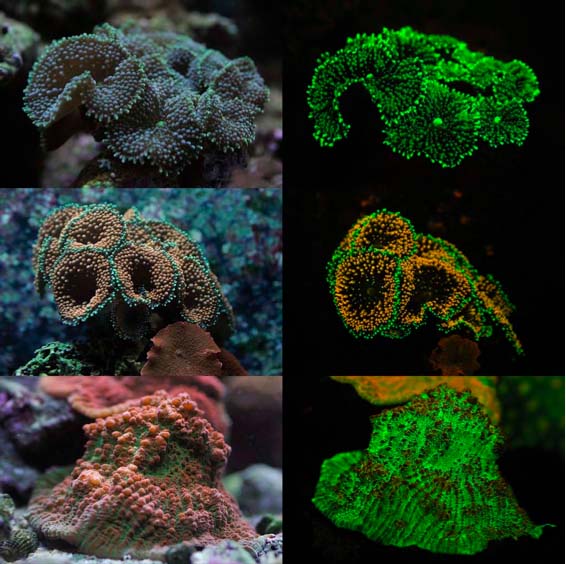 Figures 2-8. Corals in my tanks under normal light and how they fluoresce. 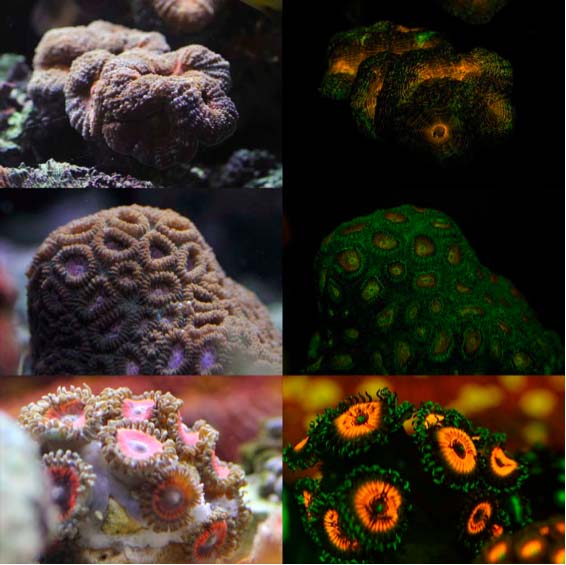 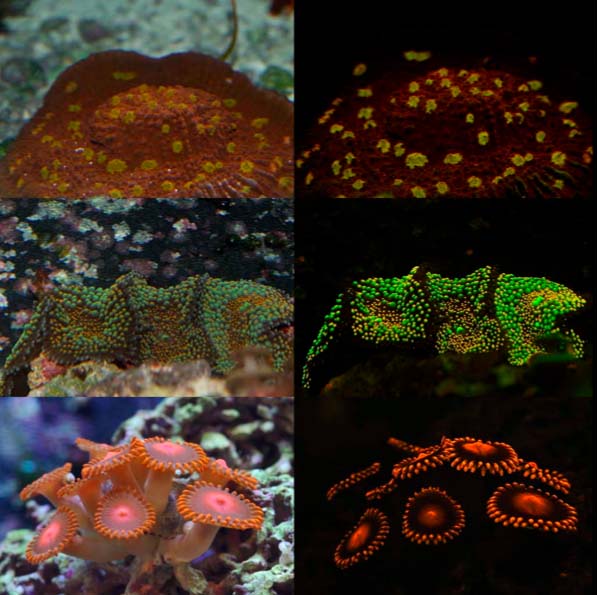 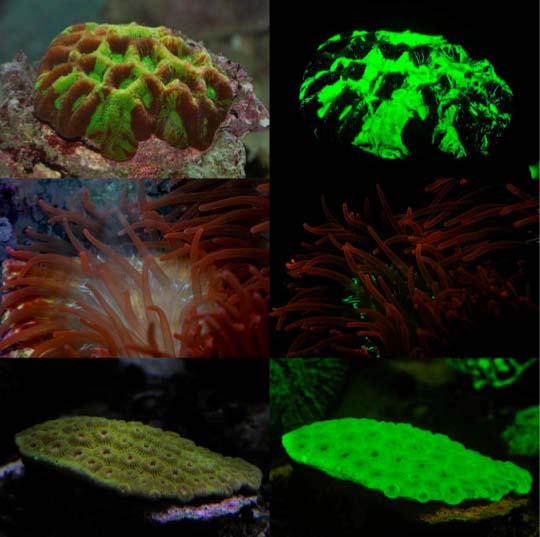 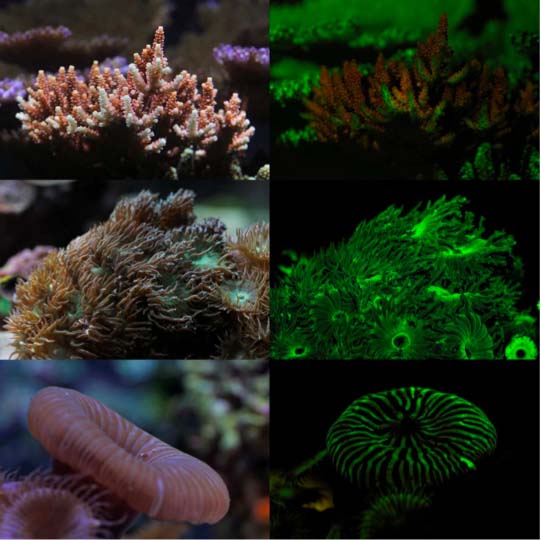 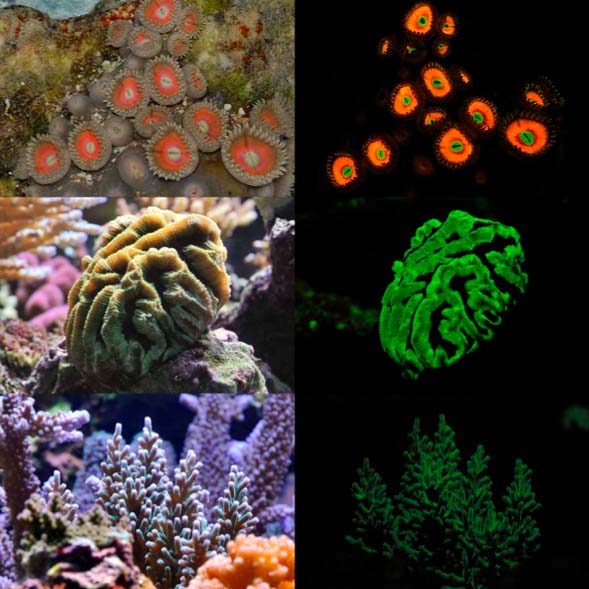 Figure 2-8, shows some of the corals in my current tank as they appear in normal metal halide lighting and how the same coral appears in a fluorescence photograph. Figures 9 and 10 are some fluorescent pictures I have taken in the past. Zoanthids, fleshy LPS corals (eg. Acanthastrea, Wellsophyllia, Lobophyllia, Micromussa, Chalice corals) are the best subjects, as they reveal a myriad of color patterns. Most Acropora have just green fluorescence. I would encourage you to try taking fluorescence photos. It is a lot of fun, and will allow you to see and capture the beauty of corals not often easily seen. 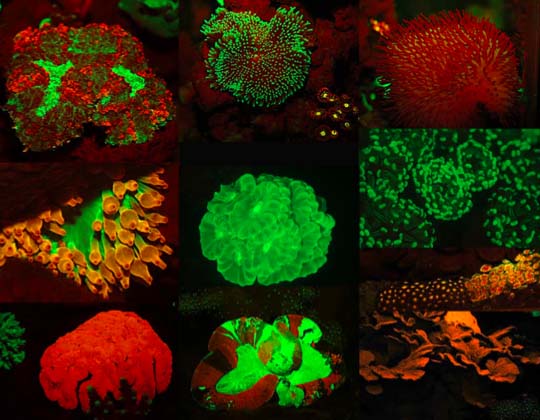 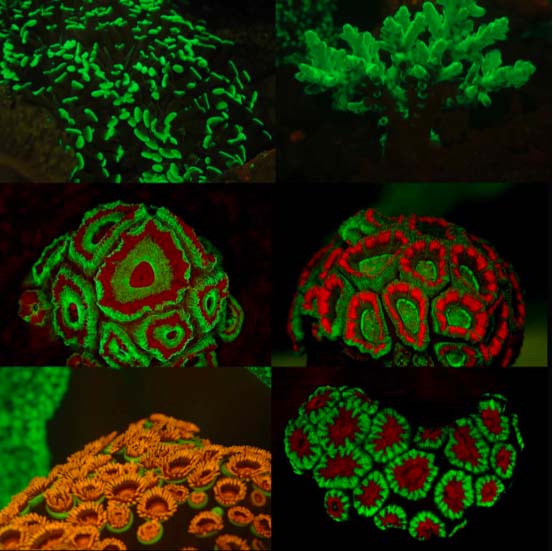