Editors Note: Richard Ross originally wrote about his work with husbandry and breeding of Sepia bandensis back in our September 2005 issue: http://www.advancedaquarist.com/2005/9/aafeature.

Anchored to an algae-covered rock in a 120-gallon tank at the
California Academy of Sciences’ Steinhart Aquarium, a cluster of
inky-colored cuttlefish eggs is beginning to swell—evidence of success
for the Academy’s new captive breeding program for dwarf cuttlefish,
Sepia bandensis. The program, pioneered by Academy biologist Richard
Ross, is the first of its kind in a U.S. aquarium, and offers the
Academy and other institutions the opportunity to study and display a
species that is both captivating and—at 2-4 inches in length—less
resource-intensive to keep than its larger relatives. “By establishing
a stable breeding population,” Ross explains, “our hope is to make it
easier for aquariums to showcase cuttlefish and their remarkable
characteristics without impacting wild populations.” 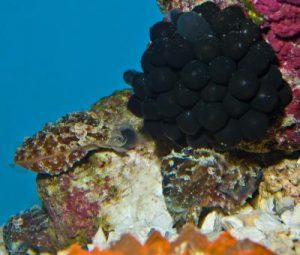 They may look like a cluster of purple grapes, but these inky balls are actually eggs from a dwarf cuttlefish, Sepia bandensis. As the eggs continue to develop, they become translucent, at which point the babies can be seen swimming inside their egg casings. To date, more than 350 dwarf cuttlefish have hatched at the California Academy of Sciences, most of which have been sent to other aquariums and research institutions. The academy is the first institution in the country to successfully breed these animals. Photo Credit: Richard Ross, California Academy of Sciences

While
called “cuttlefish,” these animals are actually not fish at all—they
are members of the class Cephalopoda, which also includes octopus,
squid, and the chambered nautilus. Perhaps best known for their highly
developed brains, nervous systems, and eyes, cephalopods are a
fascinating group of animals to both researchers and aquarium visitors.
For scientists, cephalopods’ advanced capabilities pose a host of
unanswered questions about the nature of intelligence in invertebrates
and vertebrates. For everyday observers, the dwarf cuttlefish is a
captivating ambassador to its Cephalopoda class, and its native
Indo-Pacific region. Able to rapidly change its skin color, Sepia
bandensis frequently flashes moving patterns across its skin, and can
quickly blend into its surroundings—phenomena that can be seen
regularly in the Steinhart Aquarium display. Beneath that ever-changing
skin, the dwarf cuttlefish’s physiology is equally remarkable, with
three hearts, and an esophagus that passes through its brain.

Behind the scenes at the Academy, hundreds of tiny
hatchlings—exact replicas of their adult counterparts—are being
hand-fed at least twice a day. In developing the breeding program, one
of the most significant challenges Ross faced was identifying a
successful feeding strategy for young hatchlings in the absence of
existing literature. The key, he has discovered, is that young
cuttlefish require live meals beginning with mysis shrimp, and
increasing in size with age. Hunting with a pair of feeding tentacles,
dwarf cuttlefish can devour prey the length of their own bodies.

As
the eggs on display at the Academy continue to expand, they transition
from an inky purple to translucent, at which point the babies can be
seen swimming inside their egg casings. To date, more than 350 dwarf
cuttlefish have hatched at the Academy, most of which have been sent to
other aquariums and research institutions. Since North American waters
do not house any native cuttlefish, only a handful of species are
currently seen in zoos and aquariums in the United States. Now that
these small animals are available from a sustainable captive source,
Academy biologists hope that other zoos and aquariums will take
advantage of the opportunity to share these intriguing animals with
their visitors as well. This new captive breeding program joins several
others that the Academy participates in, including those for African
penguins, and golden mantella frogs, all of which are aimed at
protecting populations in the wild.

About the Steinhart Aquarium

The California Academy of Sciences’ Steinhart Aquarium is one of
the most biodiverse and interactive aquariums in the world. Home to an
estimated 38,000 animals representing more than 900 separate species,
it offers visitors an unprecedented view of underwater life and
provides insight into the critical role that aquatic environments play
in life on Earth. The original Steinhart Aquarium opened in Golden Gate
Park in 1923, and today it houses a stunning new suite of exhibits,
including the world’s deepest living reef tank, a four-level rainforest
display, and a unique, ever-changing Water Planet exhibit.

About the California Academy of Sciences

The California Academy of Sciences is a world-class scientific
and cultural institution based in San Francisco, home to Steinhart
Aquarium, Morrison Planetarium, and Kimball Natural History Museum,
along with research and education programs. In 2008, the Academy opened
a new LEED Platinum-rated facility, and remains the only institution in
the world to combine all of those elements under one roof. Founded in
1853, the Academy is driven by a mission to explore, explain and
protect the natural world. Visit www.calacademy.org for more information.