A question I commonly ask during a presentation is ‘How many own a PAR meter’? I am often pleasantly surprised to learn that light measurement is coming more common among reef hobbyists. Still, those using a PAR meter are in the minority – which I find interesting. Undoubtedly, those not making light measurements will fret over calcium concentrations or pH levels, while leaving light intensity levels unchecked. This is interesting still – excessive light is expensive, beginning with the purchase of the lighting fixture and continuing with operational costs and peripheral expenses, such as water chilling. More importantly, excessive light can inhibit coral growth and, in extreme cases, kill them.

For those unfamiliar with these light measuring devices, Photosynthetically Active Radiation (PAR) is those wavelengths between 400nm and 700nm (violet to red light) that promote photosynthesis. A PAR meter reports the number of photons (light particles) within this bandwidth of light as Photosynthetic Photon Flux Density (PPFD), in units of micromole photons per square meter per second (µmol photons·m²·sec, or simply µmol·m²·sec). Older literature might report PPFD in units of microEinsteins per square meter per second, or µE·m²·sec. No conversion is necessary as 1 µmol·m²·sec = 1 µE·m²·sec. Maximum PPFD near the equator at noon on a clear day is ~2,100 µmol·m²·sec.

For years, PAR meters (or more properly, quantum meters) were used by only research scientists. To my knowledge, one of the first public aquariums to use one was SeaWorld Ohio. It was an aquarist there, Pete Mohan, through his writings in FAMA magazine, who introduced me to the concept of PAR measurements within an aquarium. My interest (obsession) lead to a purchase of a Li-Cor quantum meter and underwater sensor in the mid 1990’s (at the tidy sum of $1,500. I recently upgraded to a Li-Cor 1400 data logger and underwater sensor at the cost of almost $3,400.) In any, case Apogee Instruments (Logan, Utah, USA) would release a few years later a much more affordable PAR meter costing only $200 or so. This would revolutionize the way hobbyists measured light intensity within their aquaria. These meters have gone through several iterations, and this review will focus on the latest from Apogee Instruments – the MQ-200 Quantum Meter. This device has been upgraded considerably over the older model Apogee meter I own. 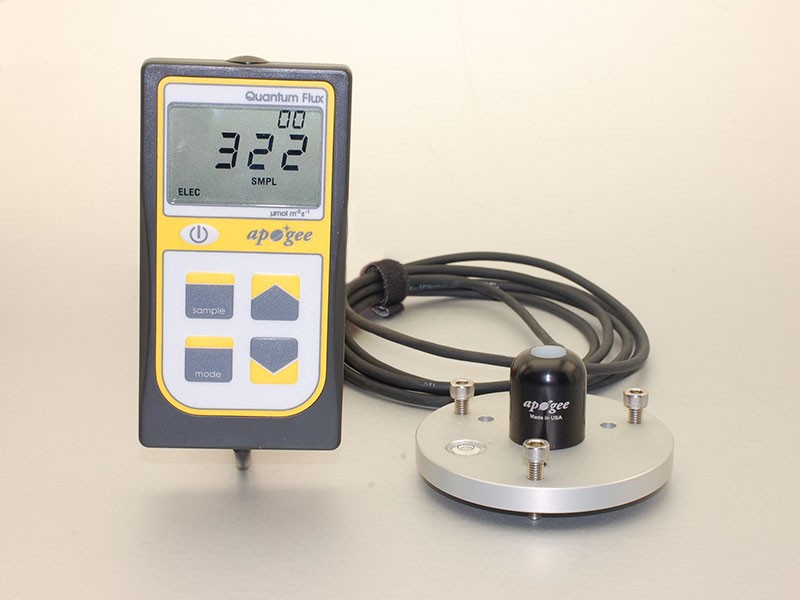 These specifications are current at the time of this writing: 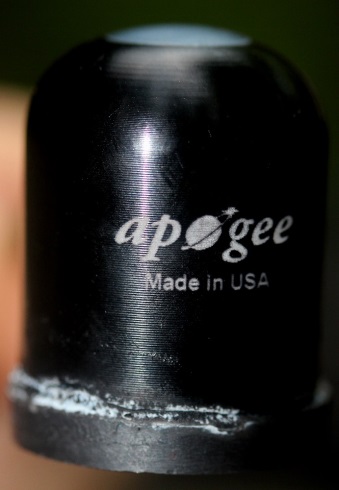 Figure 1. The hemispherical shape of the Apogee sensor makes it ‘self-cleaning’ during short-term deployments. This sensor has a magnetic glued to its bottom for use with the sensor wand described below.

The Daily Light Integral is the total amount of light (or Photosynthetic Photon Flux Density, or PPFD) falling on a given area during the entire photoperiod. The best comparison is to compare PPFD to rainfall. An instantaneous PPFD value (the number of photons falling on a given surface area in a given amount of time) is equivalent to the number of raindrops falling on an equal area and time. We would find a weather report presenting rainfall as number of raindrops falling on a square meter per second to be practically useless. We are more interested in the total amount of rainfall reported in inches or centimeters. The same is true for light – we should be interested in the total number of photons in a given photoperiod.

The MQ-200 is capable of storing 99 measurements, either in a manual entry mode or automatic data logging. In the log mode, a measurement is made every 30 seconds, and these are averaged every 30 minutes and stored in memory (for a total of 48 measurements stored every 24 hours. Hence, the meter can store about two days’ worth of measurements. The device will also calculate the Daily Light Integral for each 24-hour period.) Data is easily copied to a clipboard and then pasted into MS Excel™ or other spreadsheet. The software sorts data as ‘Sample Data’ (instantaneous measurements), ’30-Minute Average’ (logged data), and ‘Daily Totals’ (DLI). 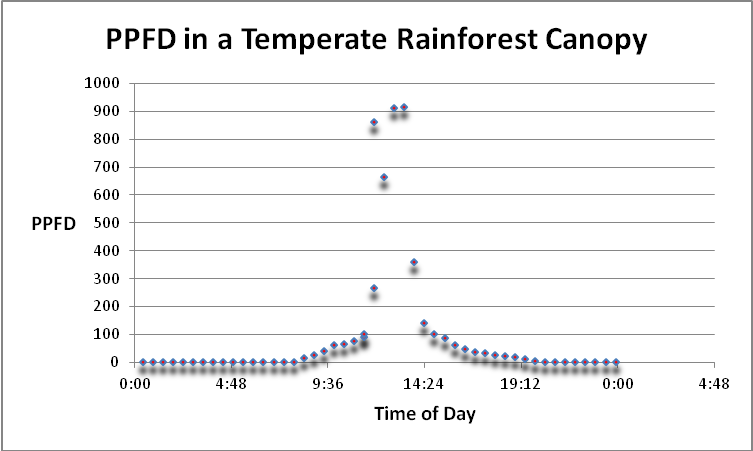 Figure 2. Data downloaded from the Apogee MQ-200 shows the plants under a temperate rainforest canopy receive intense light for only 4 hours or so per day.

The basic package for the MQ-200 meter includes the meter, cable, and submersible probe (as a unit), a plastic protective cap for the sensor, and directions for downloading the user’s manual. The battery is also included, making the meter ready to go straight out of the box.

Although the meter is capable of data logging, an optional, special USB cable and Apogee’s proprietary AMS software is required. The software is available for download from Apogee’s website and takes only a few minutes to obtain and install. If you are running a 64-bit system, the software is provided on a flash drive along with the special USB cable (a standard USB cables will not work. The meter’s output is UART – Universal Asynchronous Receiver Transmitter – and must be changed to USB by a converter within the cable). The data is saved in a CSV format and can be exported to a spreadsheet (such as MS Excel) or a word processing program (such as MS Word).

A Sensor Wand is available, but it is recommended for use in only freshwater. See below for details on constructing a saltwater-safe wand for less than ten dollars.

Since Apogee’s sensor wand is not recommended for uses in saltwater, hobbyists are forced to improvise. Fortunately, the solution is simple and inexpensive to make with parts available at any well-stocked hardware store. I made the wand described here for $8 US. This wand can easily be broken down for compact and easy transport.

Assembly is quick and easy. Glue one magnetic to the bottom of the sensor and another to one of the 90 elbows (make sure magnetic polarity is correct so they attract). Do not glue the elbows to the pipe – this will allow angling of the sensor in tight spots. A couple of options exist – the pipe can be marked in increments with a Sharpie™ so as to allow an estimation of depth. If the depth of an aquarium is deep, and the length of the wand is long and makes for inconvenient transport, it can be divided into sections and a ½” CPVC coupling can be used to friction fit the pieces together. See Figure 3. 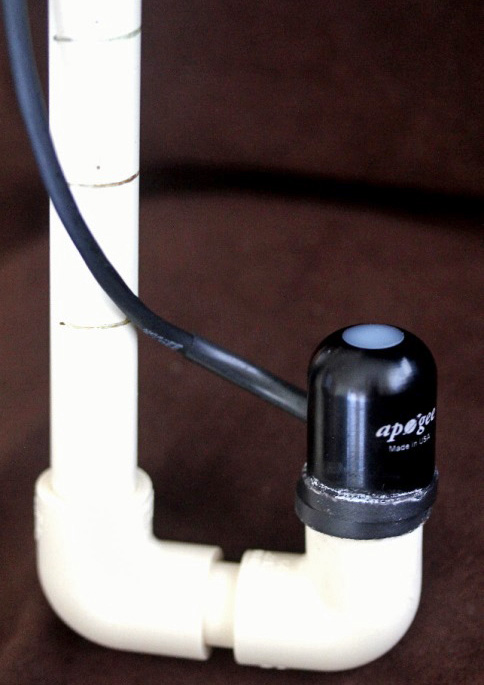 Figure 3. This homemade plastic sensor wand is perfectly safe for use in saltwater. Ceramic magnets hold the sensor to the wand.

Apogee offers a limited warranty to the original purchaser for 4 years from the date of shipment from the factory. The warranty does not cover abuse, unauthorized disassembly, damage due to fire or flood, shipping costs, etc. Apogee products are manufacturer in the USA.

At the time of this writing, Apogee’s MQ-200 Quantum Meter retails for $379. A USB cable (capable of data conversion from UART to USB) and flash drive (containing software for 64-bit systems) is available for an additional $49. The Sensor Wand – recommended for freshwater use only – is $49 (interestingly, Apogee does not list the fully extended length of this telescopic wand.)

The Apogee MQ-200 Quantum Meter offers many advantages to aquarium hobbyists. The meter is relatively inexpensive (as quantum meters go). The submersible sensor is small and allows measurements to be made in tight spots.

It is welcomed news that Apogee has increased the meter’s range from 1,999 to 3,000 µmol·m²·sec. This will allow work in strong sunlight as well measurements of intense lighting system (such as high-wattage metal halide lamps and some of the LEDs using narrow angle focusing lenses.)

Older model quantum meters from Apogee had a rotary switch to toggle between ‘electric’ and ‘sun’ modes. While this design was reliable, it was a potential entry point for water and salt spray. The new MQ-200 is improved in this respect. Meter functions are changed via a waterproof keypad. See Figure 4. 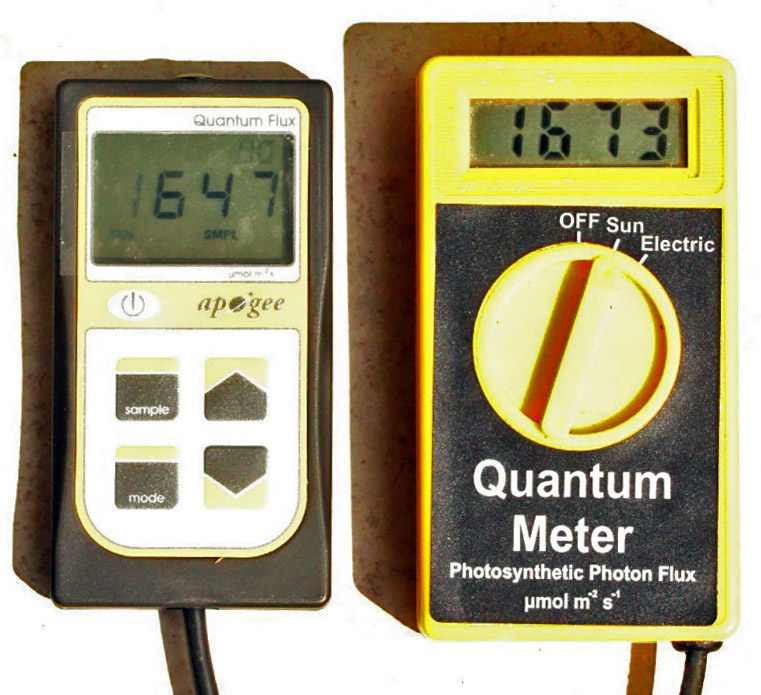 The meter’s port for the USB cord has a protective plastic plug in it, but I found it is easily dislodged through even normal handling. To protect it, I simply placed a small piece of electricians tape over it to hold in in place.

Battery replacement is more convenient than in older Apogee models. Battery replacement in older meters required removal of the entire back cover that exposed internal electronics. The battery in the MQ-200 is contained in a housing apart from the internal electronic guts, and requires removal of only one Phillips head bolt from the protective cover to access it. The coin type battery is available at almost any hardware or drug store.

The back of the meter has a threaded insert, allowing the meter to be secured with a bolt to a tripod or other support device when conducting field work.

Programming the meter for automatic data logging is simple and is accomplished with just a couple of keystrokes. While data export is quick and easy via the UART/USB cord, only the last of recorded datum shows the time. This is easily overcome; of course, I was just a little surprised that each point did not show the time it was recorded.

Hobbyists should note that this Apogee will underreport radiation from lamps producing violet and red (above ~650 nm). Metal halide lamps’ readings are usually closer to the true value than LEDs producing narrow bandwidth light at 405nm (violet) and any LED with a peak higher than 650nm.

All things considered, the Apogee MQ-200 Quantum Meter is a valuable device for serious hobbyists. In a day where thumbnail sized coral fragments are selling for close to $1,000, advanced aquarists would do well to invest in this meter.

This product was purchased through normal retail channels.

On the Great Barrier Reef