Product Review: B-Ionic Seawater is Good to the Last Drop

Sometime around a year ago, I started hearing about this new salt mix from ESV that reefing friends Jason Edward of Greenwich Aquaria and Dave Lackland of Atlantic Reef Aquaculture had begun using. Both Jason and Dave explained that there were 4 parts to the mix, that it mixed up absolutely clear and that their corals really liked it. At first I kind of blew them off thinking how much of a pain it must be to mix up four parts, and of course it mixes clear because ESV uses excessively high purity components and of course their corals look great right after doing a water change. Although I may have been skeptical at first, I’ve known these two reefers long enough to realize that if they were bringing an aquarium product to my attention, it was worth looking into. Jason and Dave didn’t go into extreme detail about why this was their new BFF salt but in any case, I knew I would have to get a hold of Bob and try some. 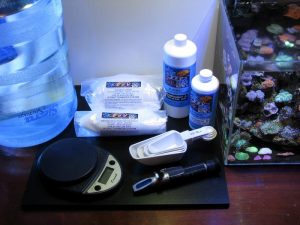 The 4-part B-ionic seawater mix from Bob Stark takes the goodness of the original two-part additive for reef aquariums and carries it to the next logical progression of reconstituting everything that is found in seawater. This 4-part B-Ionic Seawater System is nothing new to Bob or ESV; they’ve had this idea for a saltwater mix for years but it was impossible to bring it to a market where for years people were used to paying from $10 for a 50 gallon bag to $50 for a 200 gallon bucket. Once the ‘premium salts’ started jacking up the average price of aquarium saltwater mixes, ESV realized that they too could bring their new concept salt to market for a price that wouldn’t get them laughed out of the live sand box.

B-Ionic Seawater is made up of four components, two dry and two liquid. The dry components are Sodium Chloride (NaCl) and Magnesium Sulfate (MgSO4), both of which are provided in ultra high purity form and are contained in ziploc plastic bags. The remaining two parts are component A and Component B; think B-Ionic on steroids with twice as much volume of A than B. B-Ionic Seawater ships in 25, 50 and 200 gallon packages as well as 1000 gallon bulk packs for commercial use. All of the dry and liquid components are clearly labeled with a date of manufacture sticker on the label of the product. Every box comes with 4 measuring spoons, one measuring cup and one page of instructions. The instructions includes recipes for making the B-Ionic Seawater using either volume or weight, in quantities of 1, 5, 10, 20, 30, 40, 50 and 100 gallons. Smaller quantities of the B-Ionic salt should probably be measured using weight/mass to reduce the percent of error that will have a larger
effect on small volumes of water. I believe many long time users have figured out to make batches of seawater in the increments for which their components are already pre-measured. 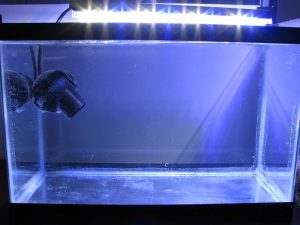 Photo 2. B-Ionic 4-part salt mix is the only one I trust to make five gallon microbatches of salt, like this crystal tank which was mixed for 10 minutes before this photo was made.

Having had so much exposure to the wonders of microbatch consumable products like beer, ice cream and cheese, I was particularly keen to see if microbatching of aquarium saltwater using the B-Ionic salt could follow in the footsteps of Fat Tire beer or Lick’s ice cream. With a sample batch of 25 gallons in hand, I set off to mix my first 5 gallons of the unique microbatch salt, a small volume that I never would have mixed with a dry salt. The directions clearly state to mix every component until it is completely dissolved before moving on to the next component in a specific order: Sodium Chloride, Magnesium Sulfate, Component A and finally Component B. With a tunze Nano Stream providing strong flow at the bottom of my mixing containers, I have found that it takes 5 minutes to dissolve the NaCl, 3 minutes to dissolve the MgSO4, and I give one minute for each of the liquid components to thoroughly mix. 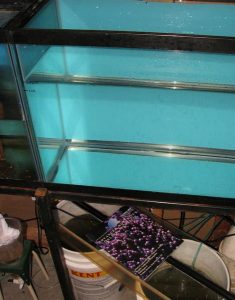 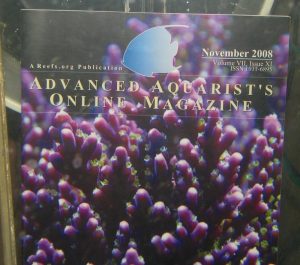 Photo 4. It cannot be overstated how clean Bionic Seawater is. This cover of a physical Advanced Aquarist magazine was photographed through 15 inches of water as demonstrated by the image above.

If you’ve mixed saltwater for more than a year you will be impressed by how quickly the B-Ionic Seawater mixes up very clear. If you’ve been mixing saltwater for over a decade and you believe it is an absolute truth that saltwater mixing containers and pumps will crust over when used to mix salt, you’ll think you witnessed a small miracle when your first batch of B-Ionic mixes up crystal clear in 10 minutes and your mixing container and mixing pumps look suspiciously clean after mixing. I have done all of my mixing thus far in fairly clean all glass aquariums just so I could see if any dust settled out on the bottom, if any organics accumulated at the surface and whether any precipitates formed around the water pump. It cannot be overstated how clinically clean the tanks and pump have remained after mixing six batches of five gallons and two batches of 25 gallons. For my B-Ionic Seawater mixing I have only used a brand new, out of the box tunze Nano Stream 6025 and there
is not an imaginary amount of precipitation on any hot parts of the pump and not a trace of scaling anywhere else on this body. Such a super clean saltwater mix can only mean good things when used in a marine or reef aquarium. 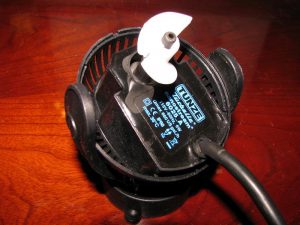 Photo 5. This tunze Nano Stream has only been used to mix Bionic Seawater and the pump looks brand new.

The reason I was interested in mixing such a small five gallon amount of the B-Ionic Seawater is to test it out on the Ecoreef One experiment. I wanted to see if large partial water changes performed as needed on this barely filtered nano reef aquarium could be a viable way of keeping the nutrients low and the trace elements high with very little other aquarium maintenance. I used a small Escali gram scale to measure out all of the components down to the gram that was prescribed for mixing five gallons. When my first microbatch of B-Ionic mixed up clear within 10 minutes, I knew that once the water warmed up to the same as the tank I would be doing a 100% water change and putting my faith in Bob’s chemical mixing and purifying skills. Contrary to aquarium water changing philosophy, I siphoned out all of the aquarium water until the Harlequin Shrimp were walking on glass and the thin Diaseris skeletons on the bottom of the tank were out of water. As soon as I replaced all
of the water to Ecoreef One, instantly the water was clear yet the corals showed none of the irritation of using even well mixed new saltwater, let alone like they had just been exposed to air for a few minutes. I had done a few partial water changes with germane one part dry salt mixes and those small 25-50% water changes slightly clouded the water and irritated the corals more than the 100% change I had just done with the 4-part Bionic mix. 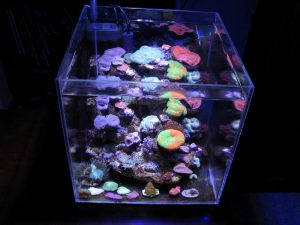 Photo 6. Ecoreef One uses only the B-ionic Seawater 4-part system and no other additives.

As with trying and testing all new things, long term performance is what really counts so I was greatly looking forward to seeing if my initial impressions with the 4-part would be similar to my long term experience. The B-Ionic salt mixed up at 430 ppm Calcium, 10 dKh and 1350 Magnesium with a salinity of 1.026, blah, blah. Any salt mix can hit those highly objective chemistry numbers but what really counts is the totally subjective beauty of the corals and the health of a reef tank. From where I was sitting, writing this article and staring at my B-Ionic Seawater-soaked corals, I can tell you that the color and polyp expansion of a variety of Fungiids, Mussids and other fleshy corals couldn’t look any better or brighter. Ecoreef One now receives a 100% water change only with B-Ionic Seawater every one to two weeks as needed and I am now moving on up in size as far as using the 4-part on my larger reefs. For experiences with larger reef aquarium systems and more demanding corals,
I will share with you some notes I shared with one of the early testers of the B-Ionic Seawater System.

Dave Lackland of Atlantic Reef Aquaculture has been using 4-Part B-Ionic Seawater since August of 2009. He described to me three very similar systems in which he is using and evaluating the performance of three quality reef aquarium saltwater mixes: Deltec, Seachem Reefsalt and B-Ionic Seawater. All of these three tanks are high energy aquariums with high flow, high light and fast growing small polyp stony corals. The Tropic Marin and Reefsalt reefs are identical: they both look great, the corals grow well and and they both have a strain of Acropora tortuosa coral which has good color and good polyp extension in both systems. Without being able to account for any other variable, the same strain of A. tortuosa growing in the reef system using B-Ionic Seawater looks stunning with much more color between the corallites, on the coenosarc and with polyp extension which is visibly more pronounced.

So what is it about the B-Ionic Seawater 4-part mix that makes it so special? Well in speaking with the designer Bob Stark as well a few other users I believe I have identified two key factors which make B-Ionic Seawater fundamentally different from the all-in-one salt mixes that we’ve used for the past 4 decades.

ESV B-Ionic Seawater is decidedly not for beginners, at least not yet. Adding four parts will never be as easy as adding a single part, dry mix and there is the potentially for serious error in mixing. I once lost count of what I was mixing and my corals let me know as soon as I poured in the new water. However, I was able to measure out the remaining amounts of the 4-parts I had, figured out what I did wrong and I quickly mixed up a fresh batch to replace the one I made with half of the amount of magnesium that I should have added. I now mix the entire four parts to completion before returning to my regularly scheduled multitasking. Also, the premium price of the B-Ionic 4 part salt mix will be unattractive to reefers who pride themselves in buying bargain basement salt for half the cost.

Although ESV B-Ionic Seawater has only been available on a very limited basis since last fall, the new 4-part salt mix already has a small following of reefing power users who are diehard fans. You can count me in among them as I plan to use exclusively B-Ionic Seawater for my Nano reef aquarium systems where 100% water changes are the entirety of the reefing technique to reduce nutrients and keep minerals balanced. For the larger reef and fish tanks I will stick to one of several premium salts which are easier to mix and more affordable when dealing with a lot of water volume. However it is safe to say that I will continue to study and make observations on the effects of the 4-part seawater mix and consider using it on larger systems in the future.

The Innovative Aquarium Products of InterZoo 2010